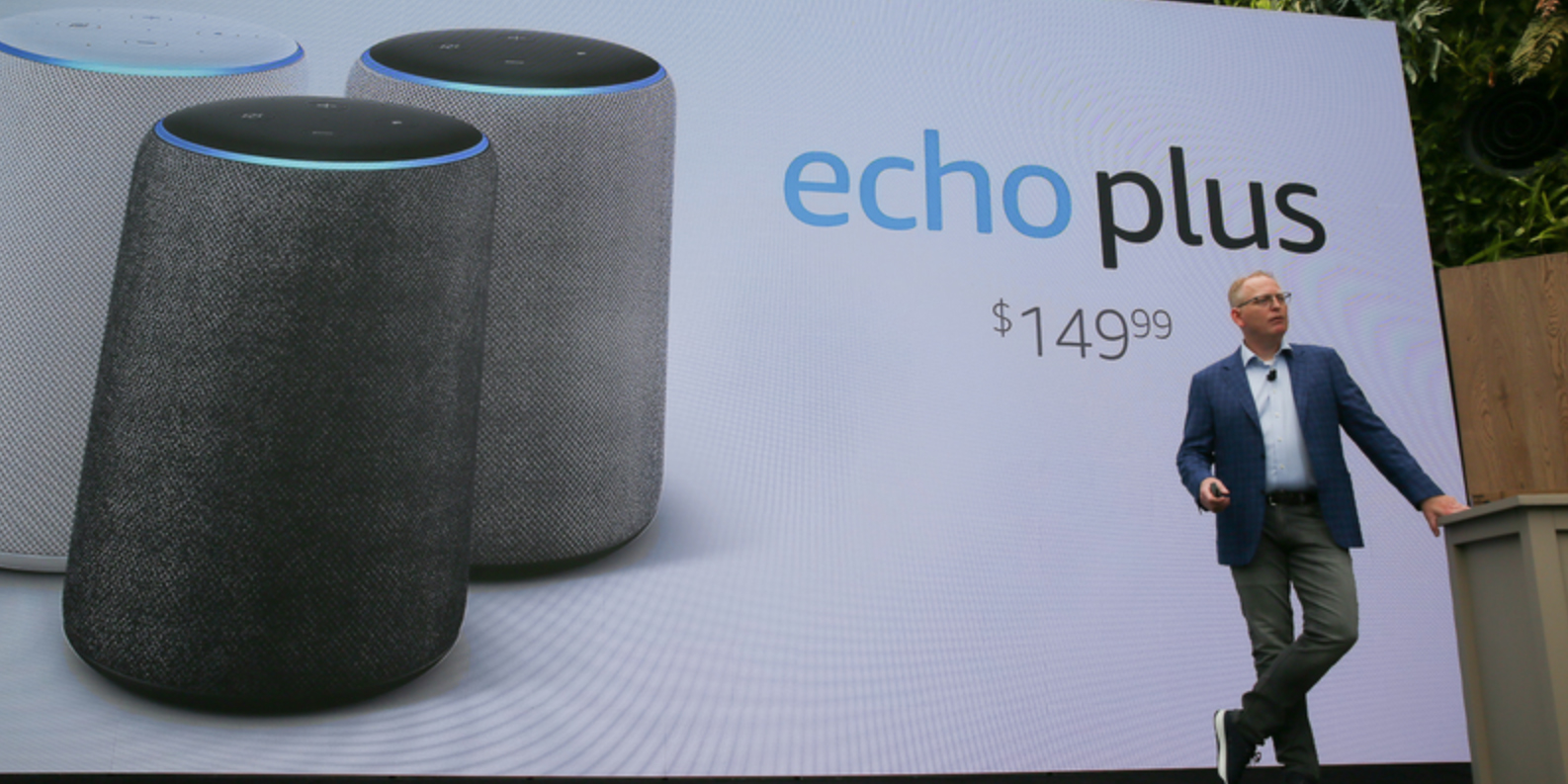 This afternoon, Amazon took the stage at its Seattle headquarters to unveil a host of new hardware. Amazon is utilizing its new Spheres location for the first time in this regard. Today’s event includes a refreshed lineup of Echo speakers along with new auto accessories and more. Head below for additional details.

Dave Limp, Vice President of Kindle, was the first to take the stage detailing how Alexa has grown in both smarts and opinion over the last year. Not only is Alexa able to access more skills than ever before, but it’s also becoming more conscious of its environment. For example, Echo speakers can now detect whispers for when you’re trying to put a child to sleep. The voice assistant will respond at the same noise level in an effort to not disrupt the family.

The Alexa team has been focusing primilarly on the new follow-up mode, which strives to make interactions “more conversational versus transactional”. This also includes a refocus on accessibility as well. Tap-to-Alexa allows users to call up the device with tap or touch of nearby services, a nice accessibility feature on Echo Show that will be coming to additional devices.

The Alexa skill library has now surpassed the 50,000 barrier, “with more coming every day.” Amazon is also refocusing the ease at which users can enable new skills, which addresses an issue many Alexa owners have (including myself). The current system has been clunky at best and an area that Amazon needs to show improvement.

Leading the way today is a brand new Echo Dot smart speaker. As we previously reported, it will arrive in October with a fabric-wrapped design for $50. Pre-orders are available today. Amazon is ditching the classic plastic hockey puck design for a far more attractive casing that’s in-line with what we’ve seen from Google Home Mini.

A second Echo Dot will also be arriving on the scene next month with a smaller design. The Echo Input will sell for $35 and will lack a built-in speaker. It’s simply a way to connect multiple systems together and add Alexa along the way. This device arrives in tandem with a new SDK that bring multi-room audio to any speaker manufacturer.

Echo Sub is also getting an unveiling today along with those multi-room capabilities. This SONOS-inspired move delivers a competitor for all of the major brands out there, including HomePod and Google Home. Echo Sub will retail for $129.99 and it sports the same fabric-wrapped design. It will work in tandem with the new Echo Link and Echo Link Amp, which are microphone-free accessories made to bring any speaker system into the Echo multi-room audio family. Echo Link will retail for $199.99 while the powered version, Echo Link Amp, will sell for $299.99. Amp is set to ship in 2019.

A refreshed Echo Plus is also being unveiled today with a new fabric-wrapped design along with an integrated thermostat sensor. This is a wise move on Amazon’s part, as very few smart home hubs have this type of integrated technology, save for the Ecobee4 thermostat. Echo Plus is designed to be the ultimate center of your smart home, made to control just about anything. Amazon is also unwrapping ‘Local Voice Control’, which allows users to utilize Alexa skills, even if the power goes out. It will retain its previous Zigbee hub status as well. Echo Plus will retail for $149.99.

Next up is the Echo Wall Clock, an old school analog timepiece with integrated Alexa skills. Yep, Amazon is going all-in on every aspect of your home. However, Wall Clock does not include an integrated speaker. It’s merely yet another microphone in your home that works in-tandem with existing Echo devices. It is LED backlit and automatically adjusts to changes in time zone. It will sell for $30 and ship later this year.

The second generation Echo Show is getting a complete re-design this year. This includes a new bass radiator design with real-time Dolby processing that Amazon says “sounds great.” The big news here is the giant display, which encompasses the entire device. If you’ve been following our coverage of the latest Google displays, this design is certainly going to be familiar to you. Echo Show has all of the same smart home functions as Echo Plus, including a built-in Zigbee hub. It will sell for the same $230 price tag and ship next month.

Amazon’s new Echo Show will work with a new add-on called Fire TV Recast, which is able to stream live TV to your device. It will work with multiple streams and record 2-4 shows at a time. This has the potential to be a complete game-changer for cordcutters. It also includes a nifty feature that helps you find the strongest antenna location in your home. Fire TV recast will sell for $229 and ship before the holidays.

Today, Amazon has announced ‘Amazon Smart Plug’. Available for pre-order today at $25, this smart home accessory is sure to clash with the hundreds of offerings already available at Amazon. The $25 price tag directly undercuts the incumbents from WeMo and TP-Link. The question is, will Amazon ban those alternatives from its online store? Only time will tell. But with Amazon going all-in on smart home controls with the Echo Plus, the smart plug is a great addition. One neat feature is that the Smart Plug also doubles as a bedroom light, which can be activated with your voice and Echo speaker. Amazon Smart Plug is available for pre-order today and will ship next month.

A new feature called Alexa Hunches is a predictive AI system that will recommend certain actions based on the time of day or your own commands. For example, when you say “goodnight Alexa”, a series of events may automatically occur, such as turning off the lights or adjusting the thermostat. Alexa will also recommend certain actions if you don’t have them preset, such as locking the door. This new predictive AI will most certainly have some bumps along the way, but promises to take Alexa to the next-level.

Well, the leaks were accurate. Amazon has unveiled Alexa Microwave. According to Amazon, the interface of the kitchen necessity has been stuck in the ’70s for sometime. The new AmazonBasics Microwave comes with built-in Dash Replenishment and is of-course voice controlled. It will sell for $60 and is slated to ship next month.

After Amazon acquired Ring last year, it only seemed like a matter of time until a refreshed lineup of devices would be announced. That day is today. Ring Stick Up Cam will sell for $180 and be available later this year. The security-focused device comes in a variety of colors and is made to compete with the likes of Netgear’s Arlo lineup and others. New integrations include a doorbell API that brings up any action on your Ring devices on Echo Show. A no-brainer integration for users of both devices.

Finally, the last announcement in today’s event is Alexa Auto. This palm-sized device is made to bring Alexa to, you guessed it, your car. Amazon claims that some 70-million cars are purchased each year but even more are already on the road and Alexa wants to be there with them. Echo Auto sports eight mics and is filled with technology. It will bring Alexa on-the-go in “a whole new way.” It will connect to your smartphone via Bluetooth and trigger location-based actions when you arrive at home, for example. Will retail for $50.