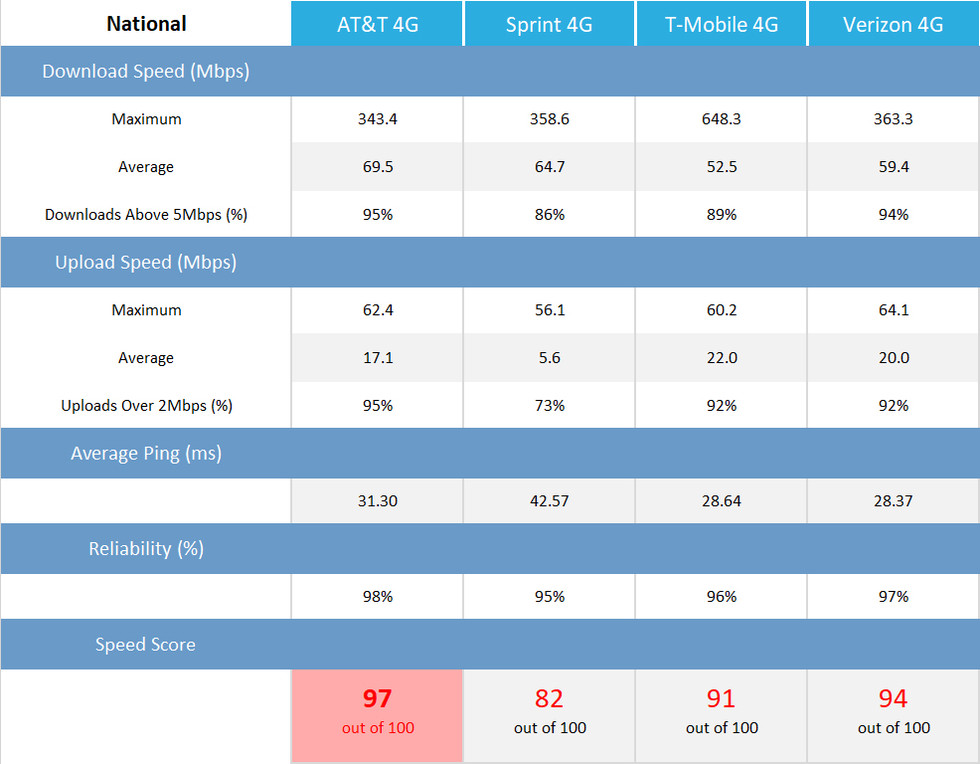 PCMag is out today with its annual mobile networks report. The report tests the four biggest networks in the United States to find out which one is actually the fastest carrier. This year’s results show a tight race for the first three spots, and a distant fourth place.

Over the past 10 years, the results of PCMag’s annual test has flip-flopped between Verizon and AT&T. This year, AT&T has come out on top, earning an overall score of 97, compared to Verizon at 94, T-Mobile at 91, and Sprint at 82. All four carriers improved in speed and reliability compared to last year.

For the first time in five years, AT&T is the nation’s fastest mobile network. AT&T won or tied in 15 of our 30 cities, along with winning or tying in every rural region. The carrier has always had great coverage, but its 5G Evolution upgrades this year helped it vault upward in terms of download speeds, breaking through most especially in the western US.

Verizon, the previous longtime winner, continued to be strong in the Northeast, winning or tying 12 cities or regions. T-Mobile took seven awards, and Sprint got one win and a tie. Sprint had the best download speeds in nine cities, though; it just kept getting dinged on the other parts of our scoring algorithm.

To test network speeds, PCMag drove through 30 cities and 25 states, running over 60,000 speed tests to determine the fastest – and most reliable – network in the United States.

AT&T has made headlines for its questionable 5G E branding, but PCMag says it’s actually a step in the right direction:

AT&T needs 5G, for a lot of reasons. And it turns out that a key step toward 5G requires improving your 4G network. AT&T’s initial 5G network uses short-distance millimeter wave airwaves, so to prevent its 5G customers from feeling like they’re falling off a cliff where there’s no 5G service, it needed to turn up the quality of its 4G. And so it did.

PCMag also points out that the vast majority of people will still be using 4G for many years to come – which further underscores AT&T’s need to improve its 4G LTE network ahead of widespread 5G adoption. It notes, however, that only the iPhone XS and iPhone XS max support gigabit LTE – which means they’re the only devices able to take full advantage of AT&T’s upgraded LTE network.

The full PCMag report is absolutely worth a read and can be found here.