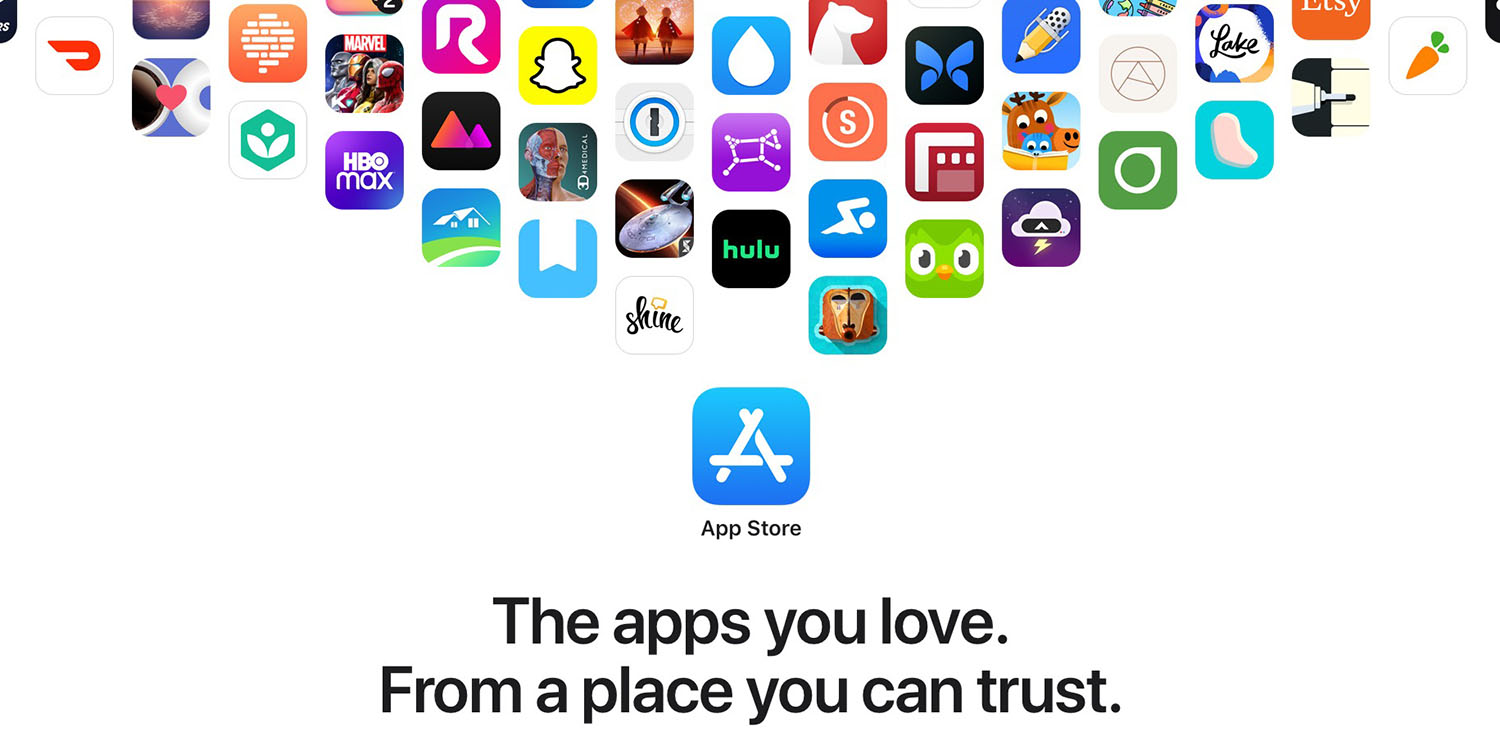 Apple is today responding to increasing antitrust pressure with an App Store PR blitz. This includes a complete revamp of its main App Store page, a new page promoting the benefits of the App Store to developers, new messaging, and a new program for developers of streaming video apps.

The response begins on Apple’s homepage, with a large banner at the top pointing visitors to the new App Store page. The headline message is ‘The apps you love from a place you can trust’ …

The new page again stresses the consumer benefits of a curated app store.

For over a decade, the App Store has proved to be a safe and trusted place to discover and download apps. But the App Store is more than just a storefront — it’s an innovative destination focused on bringing you amazing experiences. And a big part of those experiences is ensuring that the apps we offer are held to the highest standards for privacy, security, and content. Because we offer nearly two million apps — and we want you to feel good about using every single one of them.

The new page for developers is headed ‘Together we turn apps into opportunities.’

Apple is committed to helping developers turn their brightest ideas into apps that change the world. That’s why the App Store helps you from start to finish — to build, test, market, and distribute your products and grow your business. Our marketplace is secure, trusted, and accessible — connecting you to over 1.5 billion devices in 175 regions. The App Store and you. Together every step of the way.

Over a decade of trust and success. In 12 years, the App Store has grown from 500 apps to 1.8 million — all reviewed to comply with our rigorous standards for privacy, security, and content. All along the way, we’ve provided developers with the cutting‑edge tools and end‑to‑end support they need. So they can keep making the apps that change how people work, play, meet, learn, travel, and live their lives.

The pages contain some new facts and figures, the most notable of which is that more than a million apps have been rejected for objectionable content, with more than 150,000 apps rejected last year alone for failing to adhere to Apple’s privacy requirements.

One of the antitrust accusations leveled against Apple is that it doesn’t live up to its claim to treat all developers equally. There is evidence of Apple offering special deals for large developers whose apps the company wants to have on its platform.

We learned in July that Amazon Prime Video pays half the usual App Store commission, in a special deal agreed between Jeff Bezos and Eddy Cue.

Apple is also accused of creating arbitrary rules to allow it to appease companies like Netflix. It claims that it has since 2016 offered a program open to all video streaming apps, but has for the first time formalized and promoted this in the form of a new webpage for the Apple Video Partner Program.

This program is designed for apps that deliver premium subscription video entertainment services. Participating apps are required to integrate with a number of Apple technologies, such as Universal Search, Siri, AirPlay, and single sign-on or zero sign-on, to ensure a seamless experience for customers.

As a result of this integration, these apps are featured on the Apple TV app and throughout tvOS, and their content is discoverable through Universal Search and Siri.

Apple’s response comes as a number of big developers banded together to form a coalition intended to coordinate antitrust battles over the App Store.

I argued back in July that Apple’s antitrust woes aren’t going anywhere, and it needs to address them head-on. The company seems to be getting halfway there with the PR blitz offering better messaging, together with a more formal and consistent approach to its exceptions, but it still seems determined to resist any move likely to reduce its income from developers.