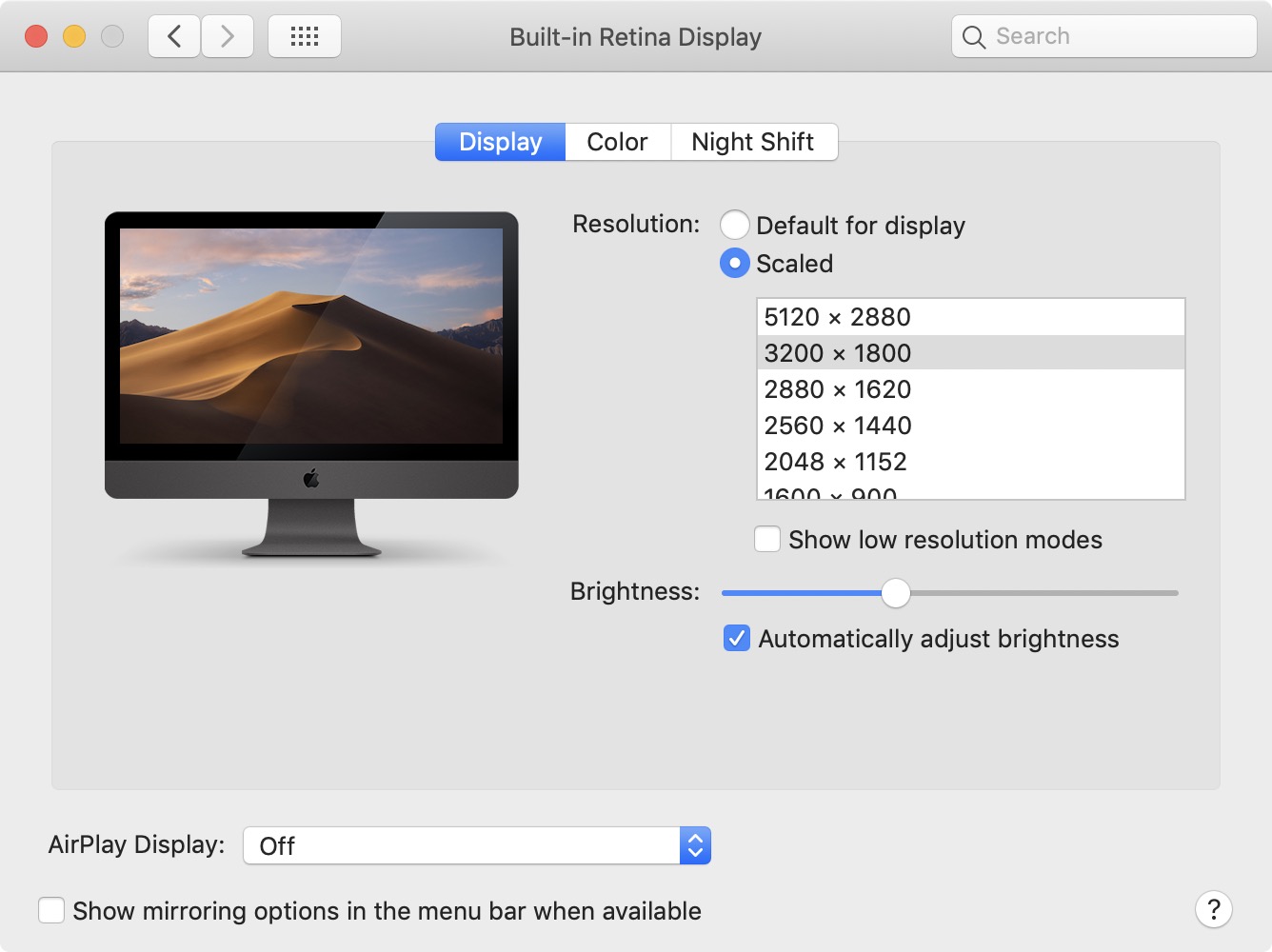 According to a report from reliable analyst Ming-Chi Kuo, Apple will launch its first 6K display for the Mac Pro this year. This report lines up with Apple’s own statement about its plans for this year, but adds some much-needed meat to the story.

If you’re a creative professional, then you should be downright excited about Apple’s upcoming plans for the Mac in 2019. This year is when Apple is scheduled launch its new Mac Pro, along with its new 6K display. Watch our latest episode of Back to the Mac as we consider what we know and some of the possibilities related to its new monitor.

What we know about the Apple 6K Display

Among many other details from his latest report, analyst Ming-Chi Kuo outlined a few important pieces of information related to the upcoming Apple display. Keep in mind that Kuo’s reporting is based on supply chain intel, so while he is more often correct than not, none of this is written in stone.

First and foremost, Kuo confirms that Apple is working on a new in-house display that’s still on schedule for 2019, so we know it should arrive in stores within the next 10 months.

Prior to Kuo’s report, Apple last referenced its return to the display market in December 2017 via a line at the bottom of its iMac Pro press release:

In addition to the new iMac Pro, Apple is working on a completely redesigned, next-generation Mac Pro architected for pro customers who need the highest performance, high-throughput system in a modular, upgradeable design, as well as a new high-end pro display.

Now Kuo is sharing likely specs too, and they definitely qualify as specs for a pro display.

In addition to the size, Kuo also notes that the display will feature “outstanding picture quality”, which is owed to a Mini LED-like backlight design.

Kuo concludes his discussion of Apple’s upcoming professional display by noting that it will feature a 6K resolution. More specifically, Kuo notes that it will be a 6K3K display, equating to roughly in the ballpark of ~6000 pixels horizontally, and ~3000 pixels vertically.

Now that the foundation is laid for Apple’s professional 6K display, we can begin filling in some of the gaps.

When looking at the potential resolution of a 6K3K display, one particular resolution immediately comes to mind — 6400×3600. I can’t say that this figure will definitely be the native resolution of Apple’s 6K display, but such a number makes sense for a few reasons:

6K might not seem as sexy as 8K, but a 6400×3600 display is still a big increase in resolution compared to the current 5K displays found in Apple’s iMac and the LG UltraFine 5K display.

But numbers are just numbers, and real-world examples really help to show how useful such a resolution bump could be. Below are comparisons of current popular display resolutions versus the probable Apple 6K display. The blue area is the 6400×3600 Apple 6K resolution. 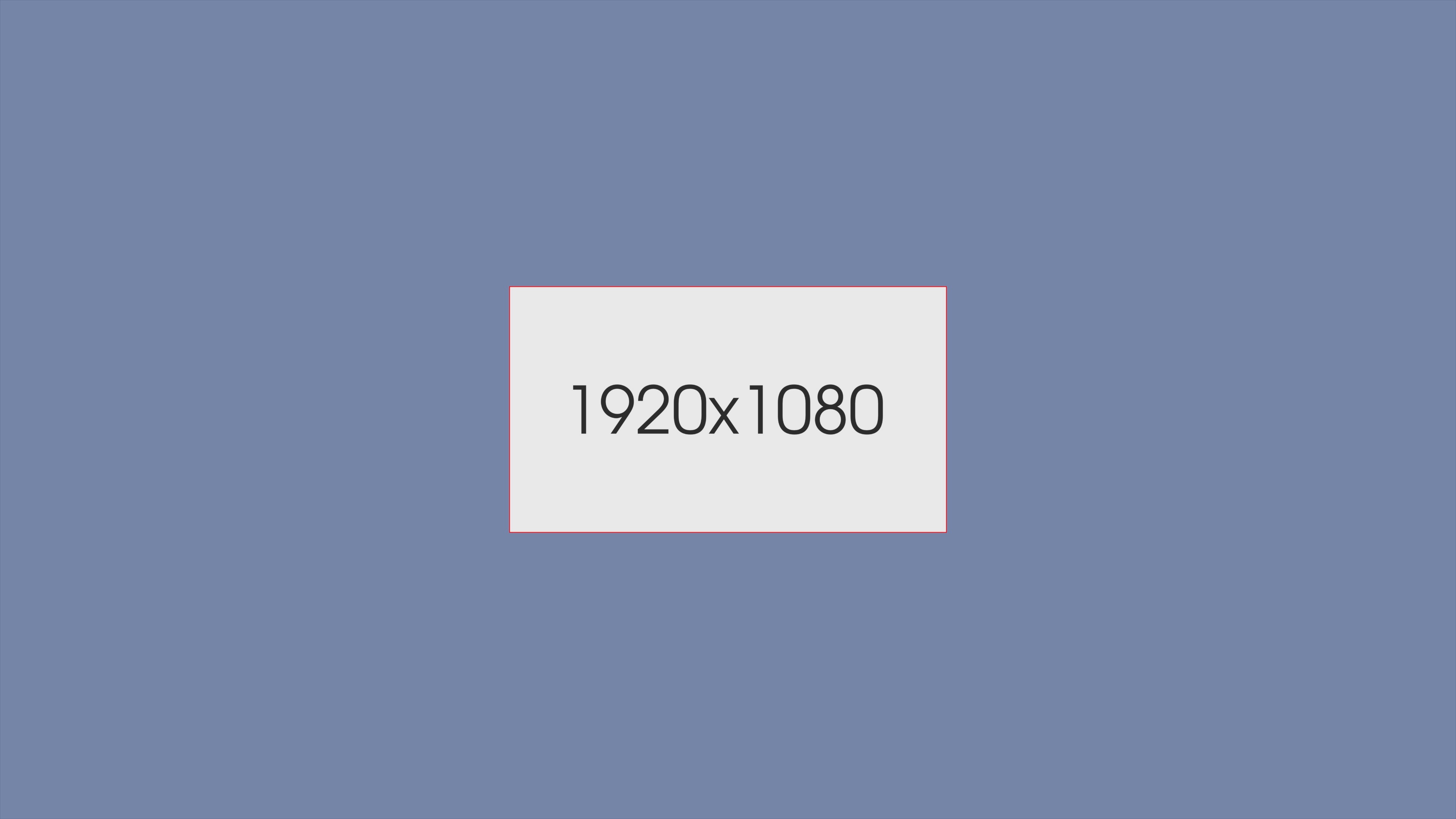 Apple’s 6K display would have enough resolution to fit nine different instances of full-resolution 1080p video inside with room to spare: 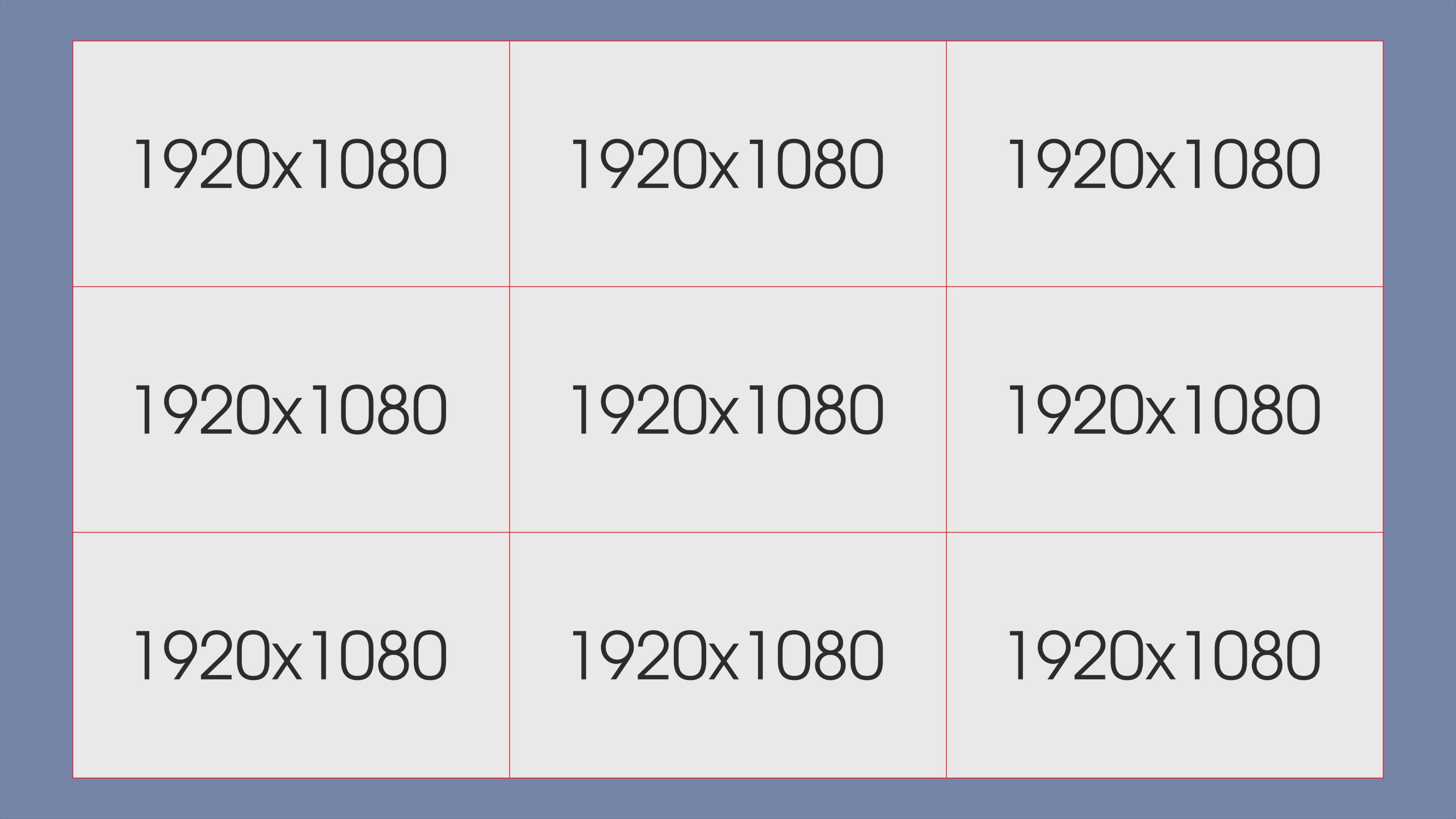 How does an Apple 6K monitor stack up to a 4K UHD display? Here’s a look: 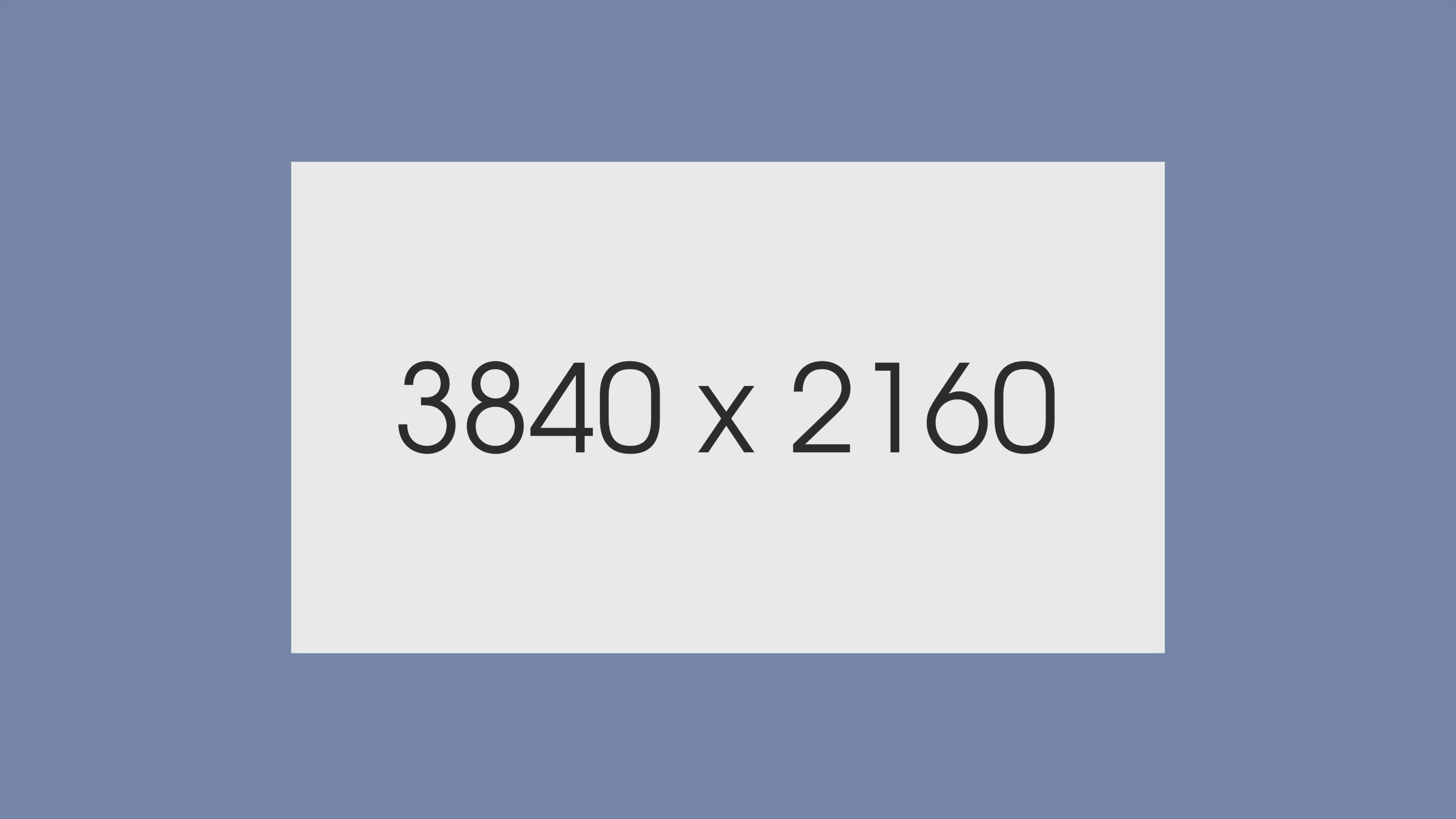 As you can see, you can easily fit a UHD resolution display area inside the 6K Apple display area with plenty of room to spare.

The 5K display in Apple’s iMac and iMac Pro is currently the most pixel-dense display Apple makes. Here’s how Apple’s upcoming 6K3K display might compare: 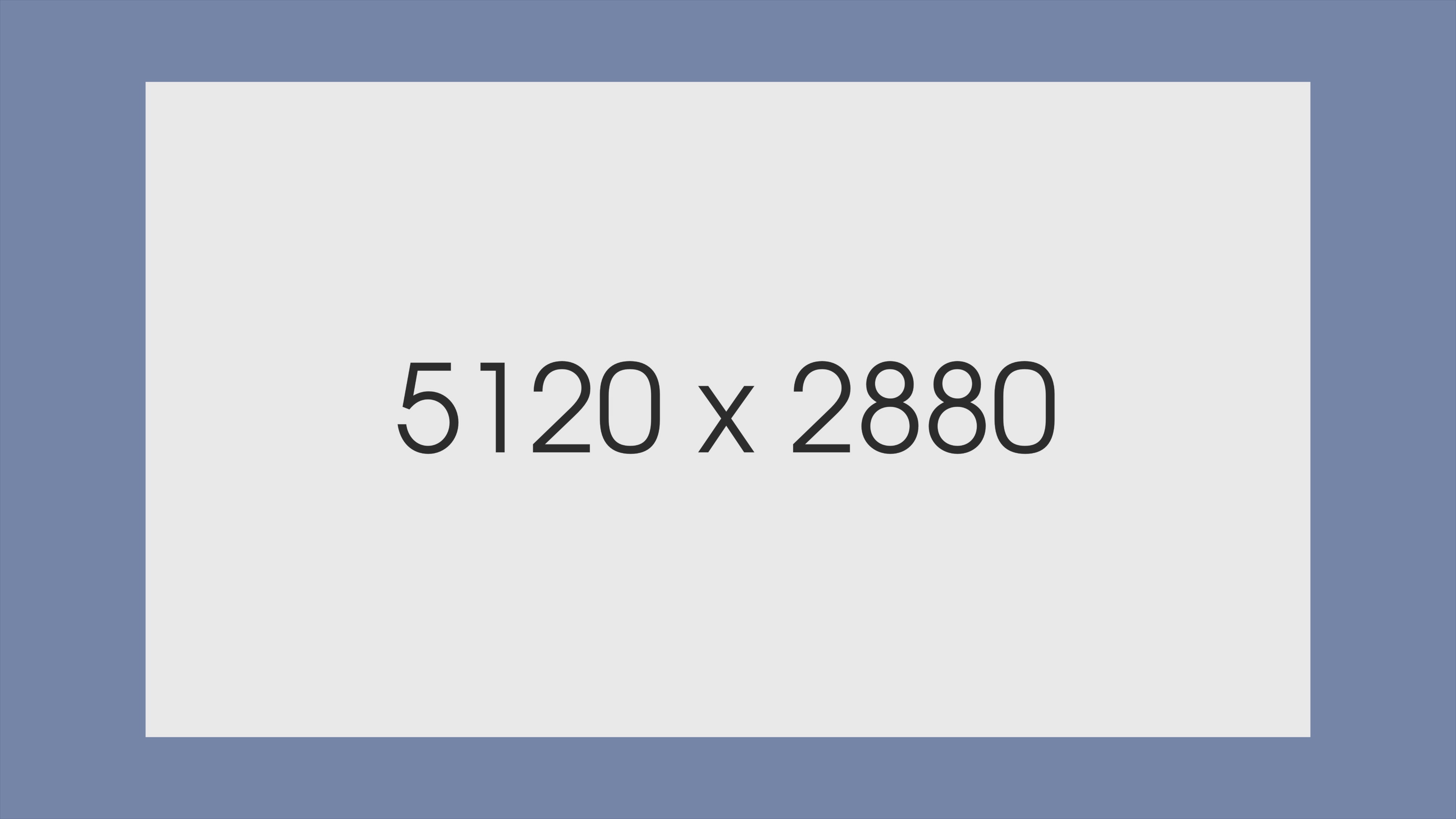 One major use-case example of the benefit of the extra real estate is when editing 4K video in Final Cut Pro X. Here’s what it looks like to edit 4K video zoomed in to 100% on the 5K iMac Pro set at its default resolution: 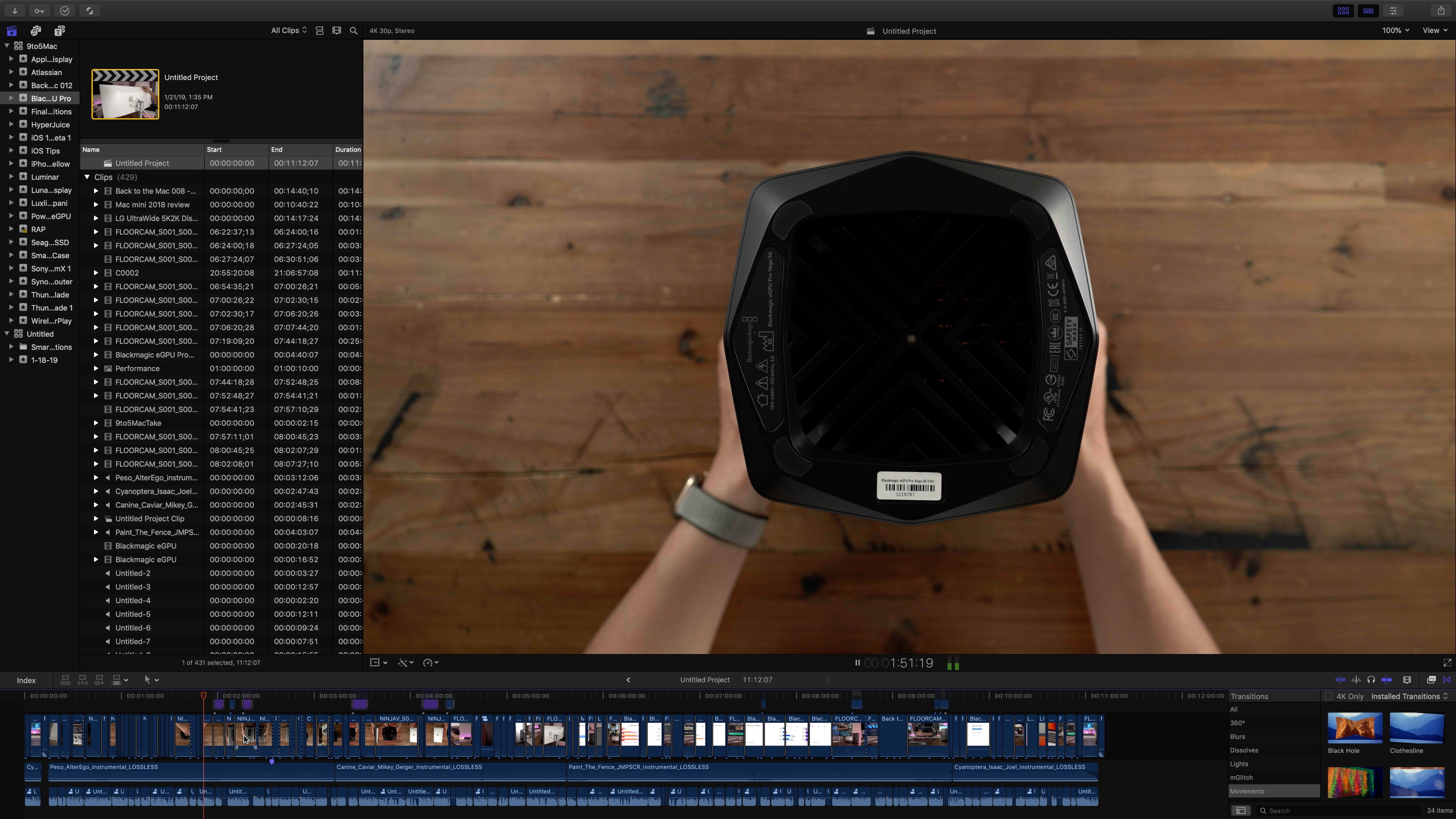 While you can fit full-resolution 4K video within the default resolution area (2560×1440 pixel-doubled) and still manage to interface with the browser and timeline, it’s extremely cramped. Having the extra resolution provided by a 6K display would go a long way towards improving the editing environment.

Notice the significant space difference when comparing the 5K working area above versus the 6K working area below. Editing 4K video zoomed in to 100% is a much better experience, because it allows room for the browser, timeline, and inspector. While it’s possible to use scaled resolutions on the iMac Pro right now to achieve a similar workspace, everything is really tiny when doing so, and causes me major eye strain. 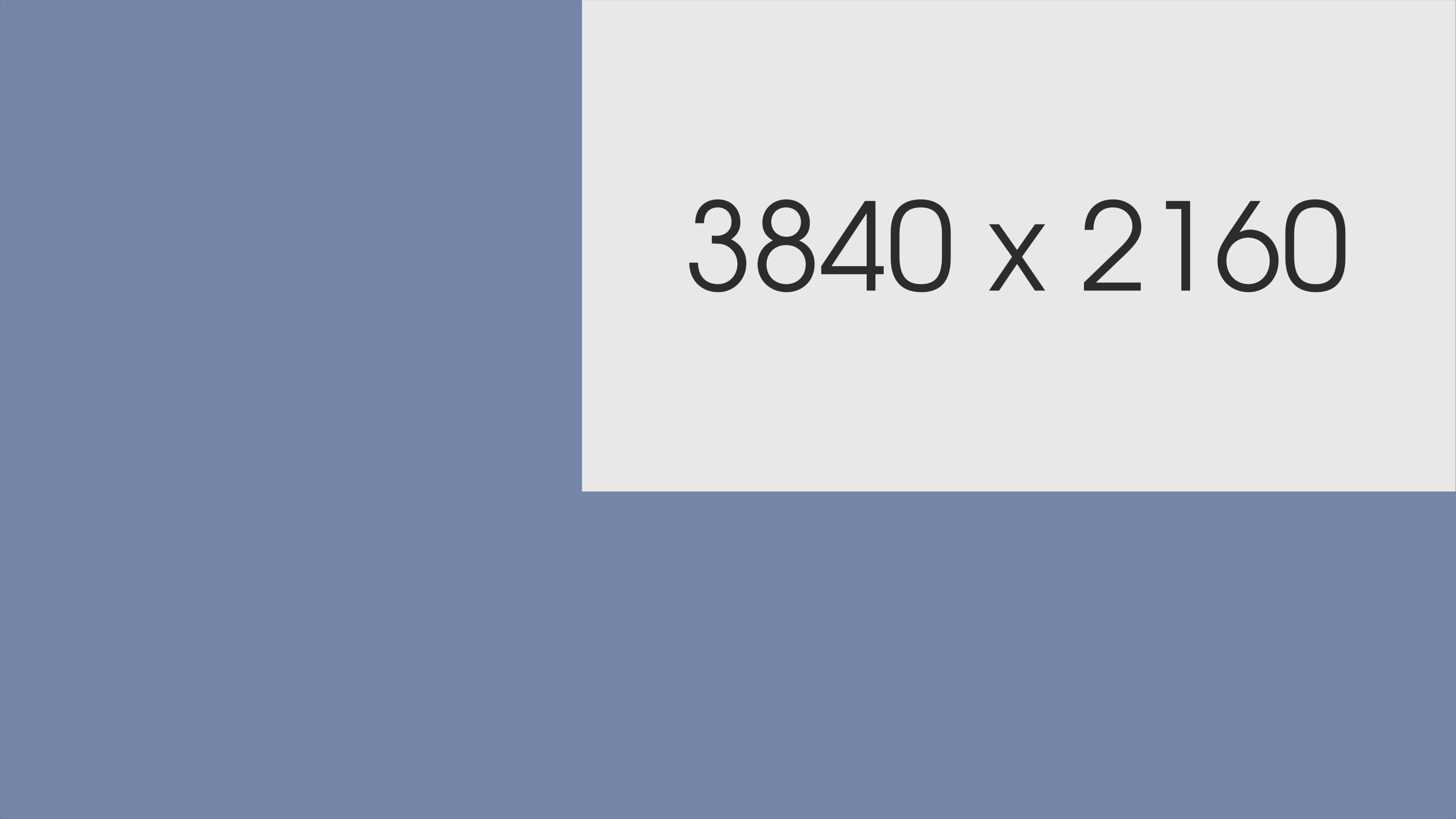 31.6-inches versus 27-inches might not seem like a lot on paper, but in reality it is a big difference. Apple’s 6K display will be significantly larger than the 27-inch Apple Thunderbolt Display that the company discontinued back in June of 2016.

For example, the 5K iMac and iMac Pro sport 27-inch display panels, but both machines feature substantial bezels and a large bottom chin. In fact, the entire front surface area of the 27-inch 5K iMac is less than 31.6-inches diagonal. That means that the display panel alone for Apple’s upcoming 6K monitor will be larger than the 5K iMac display, including its bezels. 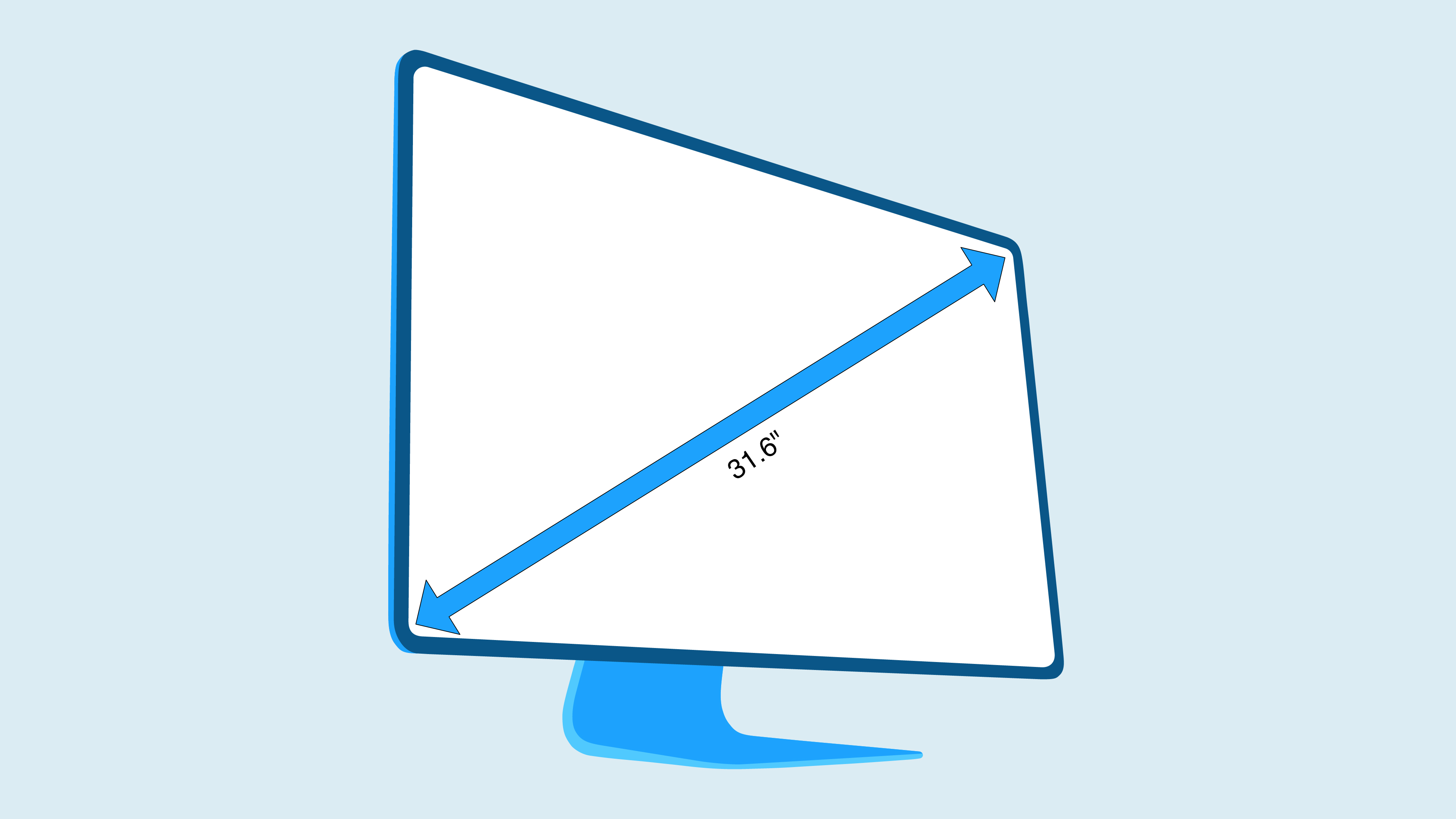 The larger size display means larger pixels, which results in a display that packs in extra resolution, yet won’t cause needless eyestrain due to on-screen assets being so small. Essentially, the display size has been scaled up to compensate for increased resolution.

With the size and proposed native resolution in mind, the PPI of such a panel would rate slightly higher than Apple’s 5K iMac — 226 vs 218 PPI.

Apple has long been at the forefront in consumer display technology. It released one of the first 5K displays with the 5K iMac, and prior to that it released its pixel-doubled “Retina” displays across its iPhone, iPad, and Mac lineup. Apple has also adopted features like True Tone, which dynamically changes the white point of a display based on ambient lighting, and ProMotion, the dynamic display refresh technology found in the iPad Pro.

Ming-Chi Kuo’s report doesn’t get specific when it discusses the display technology used by Apple’s 6K display, but it does note that it will feature “outstanding picture quality”. One of the reasons cited for this is thanks to use of a Mini LED-like backlight design.

Essentially regions of the backlight can be turned on and off unlike current Mac displays where the whole backlight panel lights up evenly. If you turn a backlight off in a region you get an effect similar to true black OLED, resulting in enhanced contrast ratio. A Mini LED-like backlight design would be more precise, thinner, and more energy-efficient.

One of the great things about Apple’s discontinued Thunderbolt Display was the amount of I/O present on the rear of the panel. The product that Apple recommended as a Thunderbolt Display alternative, the LG UltraFine 5K Display, was a bit underwhelming in comparison. 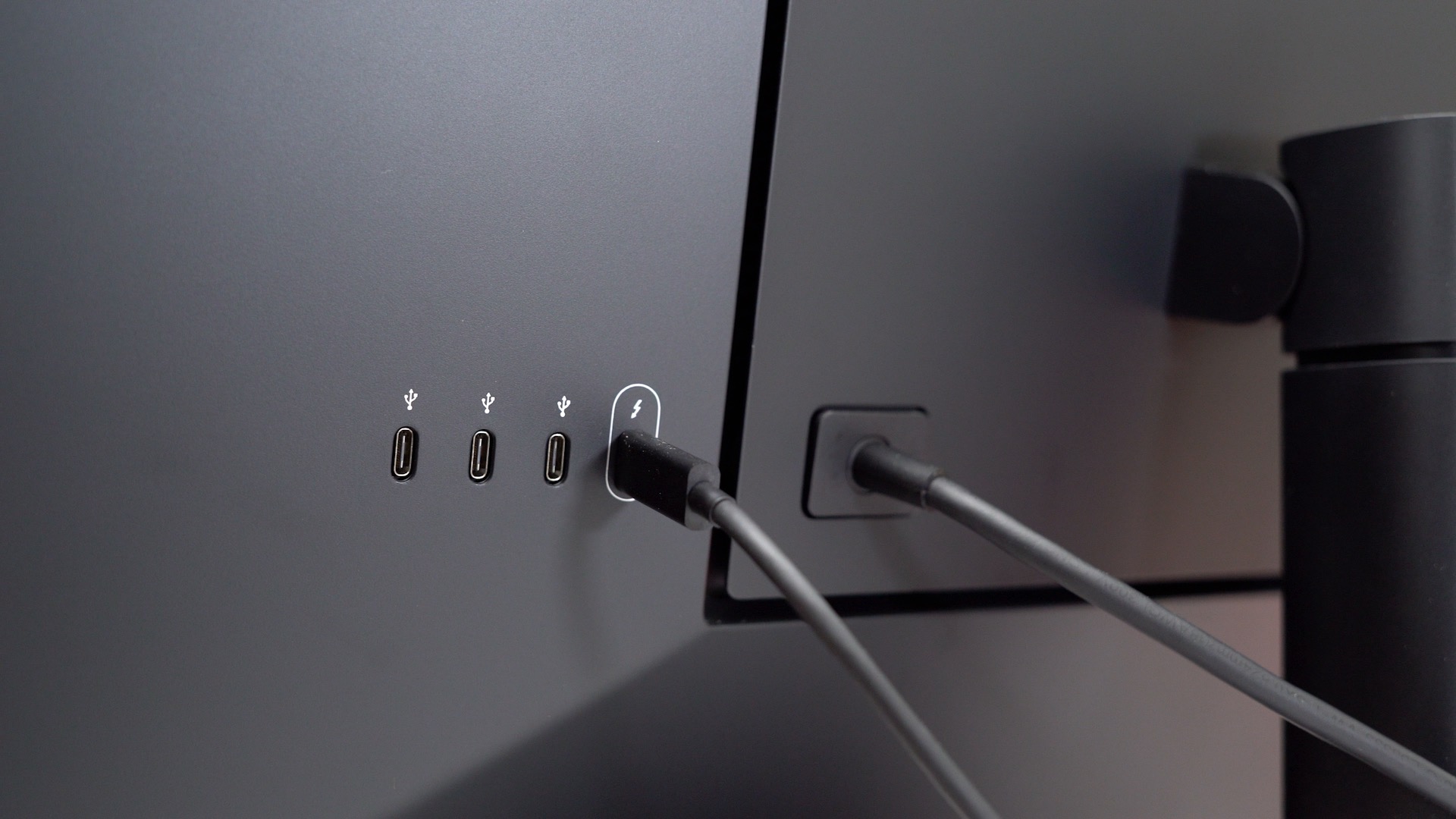 With the Apple 6K display aimed at the professional market, I’m hopeful that the I/O will reflect that. However, it’s difficult to say for sure what I/O Apple will include given the immense amount of bandwidth already used by the display itself. 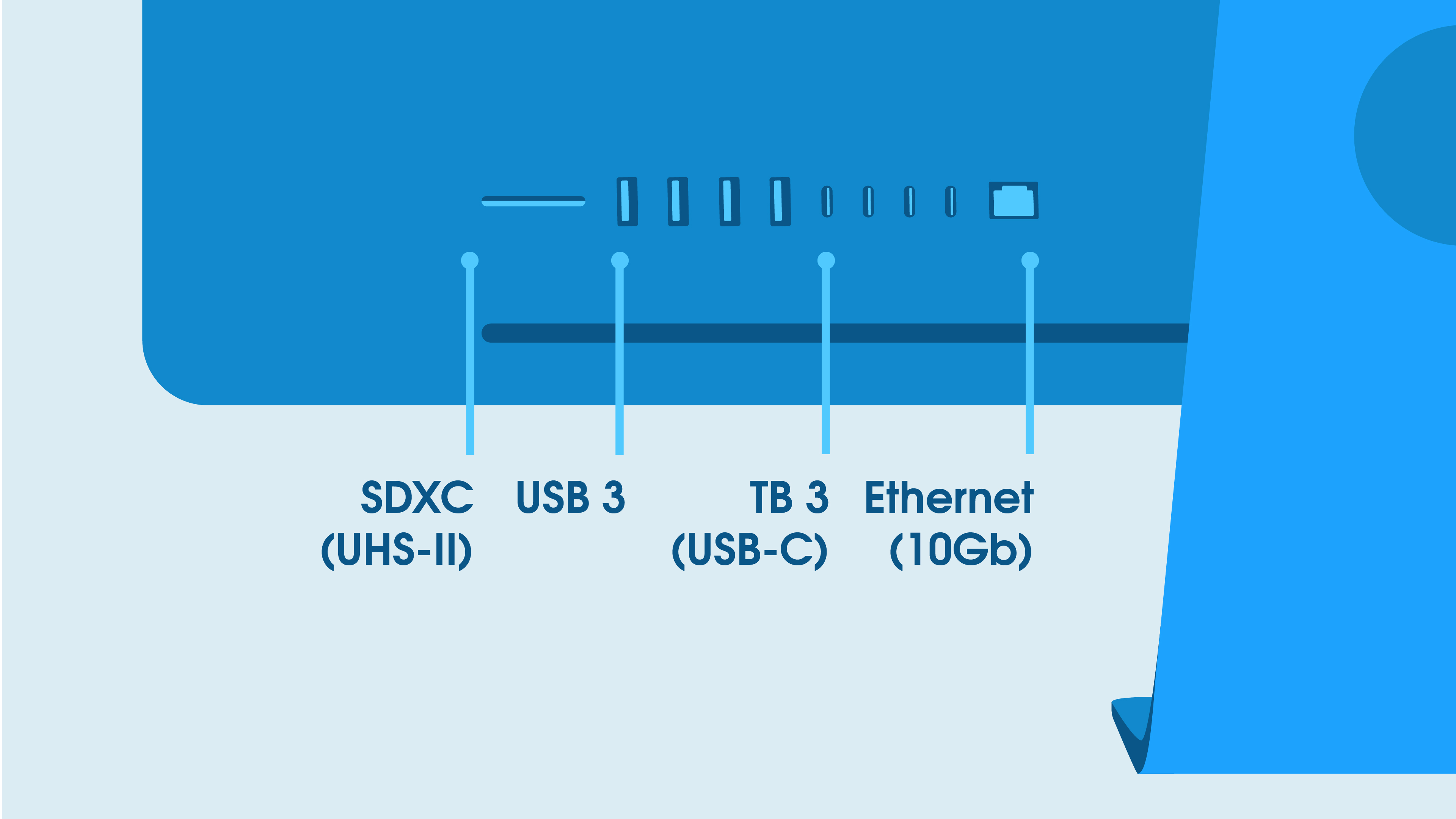 Our own Michael Steeber mocked up what the back panel could look like on Apple’s 6K display, but obviously such bandwidth requirements might be out of scope depending on how Apple goes about putting everything together.

There’s still a lot to be learned about Apple’s 6K display, but we now have a slightly better picture of what we should expect to see before the end of 2019. We know the probable size, resolution, and we know it will feature a display panel that’s significantly better than what we currently have today.

Yet, things like I/O, price, compatibility, and overall performance are still unknown at this time. And what about Face ID? Will such technology be included in the Apple 6K display?

Stay tuned, because 2019 is just getting started, and the rumors are already beginning to heat up.

What are your thoughts on Apple’s 6K display? Sound off in the comments with your observations and opinions, and be sure to subscribe to 9to5Mac on YouTube for future episodes of Back to the Mac.

Special thanks to 9to5Mac’s Benjamin Mayo for contributing to this report.