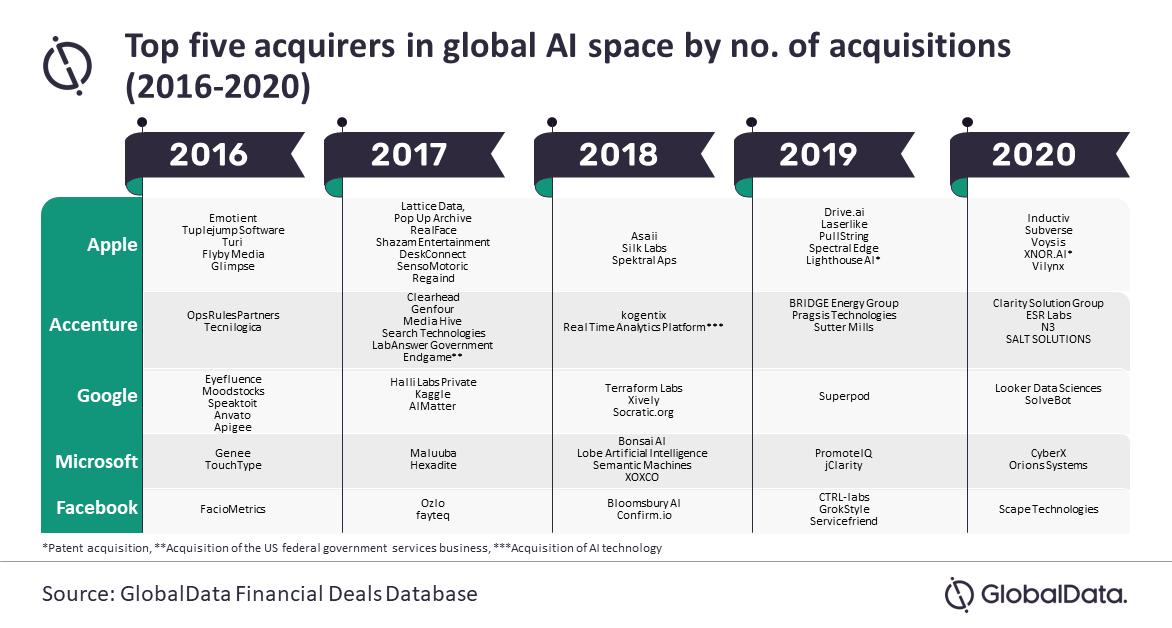 Once in a while, Apple announces the acquisition of another company or startup, but now, new research from GlobalData shows that Apple is in fact investing heavily in artificial intelligence. The research reveals that Apple has acquired more AI companies than anyone else between 2016 and 2020.

Apple comes ahead of companies like Accenture, Google, Microsoft, and Facebook when it comes to the acquisition of companies and startups that specialize in AI. In five years, Apple has bought 25 AI companies, while Google has bought 14.

When considering the data from Apple, Google, Microsoft, and Facebook combined, more than 60 of AI companies were acquired between 2016 and 2020. “AI has remained a key focus area for tech giants and growing competition to dominate the space has resulted in an acquisition spree among these companies,” said GlobalData.

With the advances in technologies that rely on artificial intelligence, ranging from virtual assistants to neural engines, it’s expected that these big tech companies would invest in such category. As for Apple, most of the acquisitions seem to be related to improving Siri, as noted by Nicklas Nilsson, Senior Analyst on the Thematic Research Team at GlobalData.

Apple has gone on a shopping spree in efforts to catch up with Google (Google Assistant) and Amazon (Alexa). Siri was first on the market, but it consistently ranks below the two in terms of “smartness”, which is partly why Apple is far behind in smart speaker sales. Apple also want to make sure to keep its strong position within wearables. It is the dominant player in smartwatches. The acquisition of Xnor.ai last year was made to improve its on-edge processing capabilities, which has become important as it eliminates the need for data to be sent to the cloud, thereby improving data privacy.

Of course, there are investments in other areas as well. Lighthouse AI, a home security camera startup, was acquired by Apple in 2019, while Drive.ai, also acquired in 2019, had multiple technologies related to autonomous vehicles. As always, Apple doesn’t detail the purpose of each acquisition.