Apple began publicly selling its Pride Edition Woven Nylon band for Apple Watch during WWDC week earlier in June, one year after it handed out a similar band to its employees at Pride events in San Francisco.

During its first few weeks up on Apple.com, the company made no mention as to whether any portion of the profits made off of the band would go towards LGBTQ organizations, but a new change made to the band’s webpage has confirmed that Apple will be helping out such advocacy groups with profits made from the rainbow-emblazoned Pride band.

As spotted by Redditor N-Code, the new Product Information section of the Pride Woven Nylon band confirms that a portion of proceeds from its sales in the United States will help benefit LGBTQ groups including GLSEN, The Trevor Project, the Human Rights Campaign, and PFLAG. Internationally, ILGA will see the same donations. A new banner referencing the donation support was also added to the main Apple Watch page on Apple.com.

The changes were made yesterday, with the Wayback Machine internet archive providing a point of comparison dating back to this past Saturday, June 17. 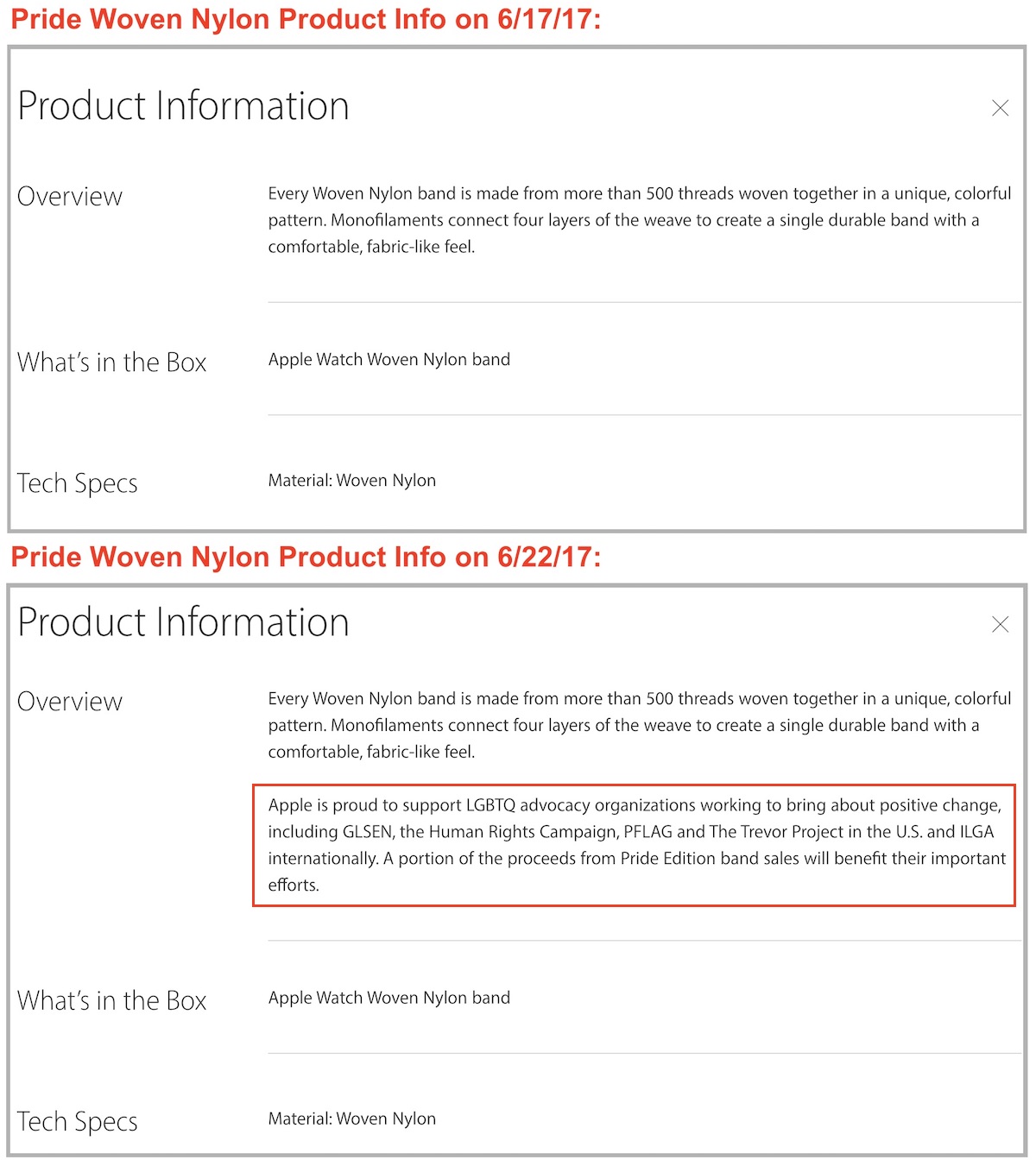 Apple is proud to support LGBTQ advocacy organizations working to bring about positive change, including GLSEN, the Human Rights Campaign, PFLAG and The Trevor Project in the U.S. and ILGA internationally. A portion of the proceeds from Pride Edition band sales will benefit their important efforts.

Apple runs similar donation initiatives with many of its product lines, most popularly being (PRODUCT)RED. Apple devices sold with that banner have a portion of their proceeds donated to the Global Fund to help raise awareness and fight HIV/AIDS. Last year marked Apple’s tenth year anniversary in supporting (PRODUCT)RED’S causes.

At the time, Apple CEO Tim Cook commented on the company’s support of causes such as (PRODUCT)RED and pro-LGBTQ organizations, addressing critics who believe his and Apple’s public stances are made to endear millennial customers into buying products in the Apple ecosystem, among other criticisms. In response Cook said, “We haven’t shied away from being visible on a number of topics, and if it’s something in our wheelhouse, we’ll always be visible and stand up to protect as well as advance people’s rights.”