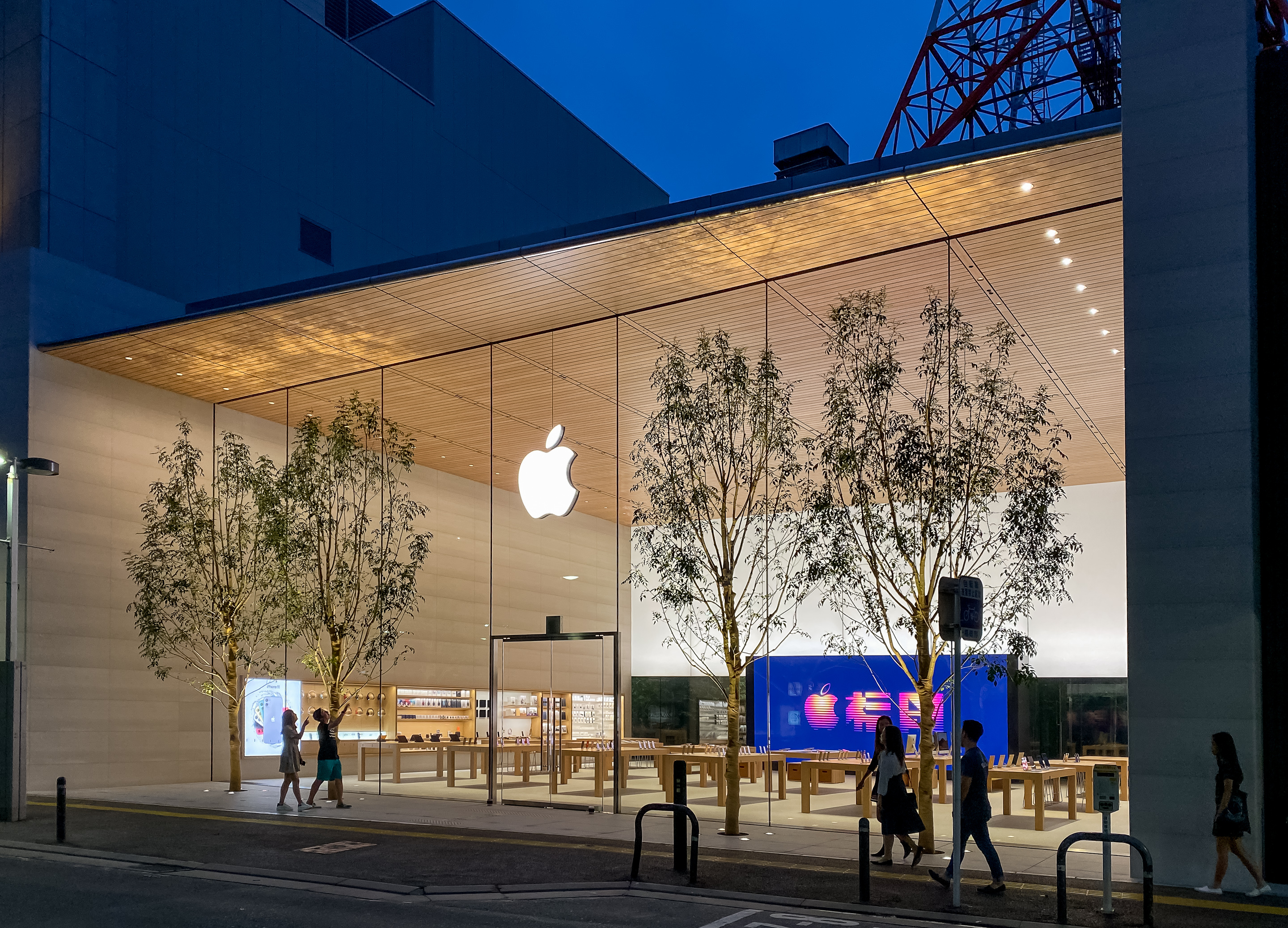 Japan has been treated to six new and remodeled stores since April 2018 as part of Apple’s significant investment in the country. The latest is Apple Fukuoka, which moved from its original classic location in the Tenjin district to a completely unique new space just 150 meters away. The old store was the last in the world with a vintage feature Apple called The Studio.

Drawing design inspiration from stores like Apple Garosugil, the company’s first in South Korea, Apple Fukuoka’s facade has a dynamic stance with two stepped stone walls bridged by an angled canopy. Four trees are shaded by the roofline and front the store’s glass curtain window. The facade is 50% wider and three times taller than the old store. Instead of terrazzo, square stone tiles line the floor, sculpted with integrated air conditioning vents.

Like other recent stores in Kyoto and Marunouchi, Apple has considered local tastes and culture when building the new Apple Fukuoka. The store is the first in the world with a new type of shoji screen designed to bring soft, natural light in during the day. Shoji is a customary Japanese interior design element consisting of translucent paper stretched over a timber frame. 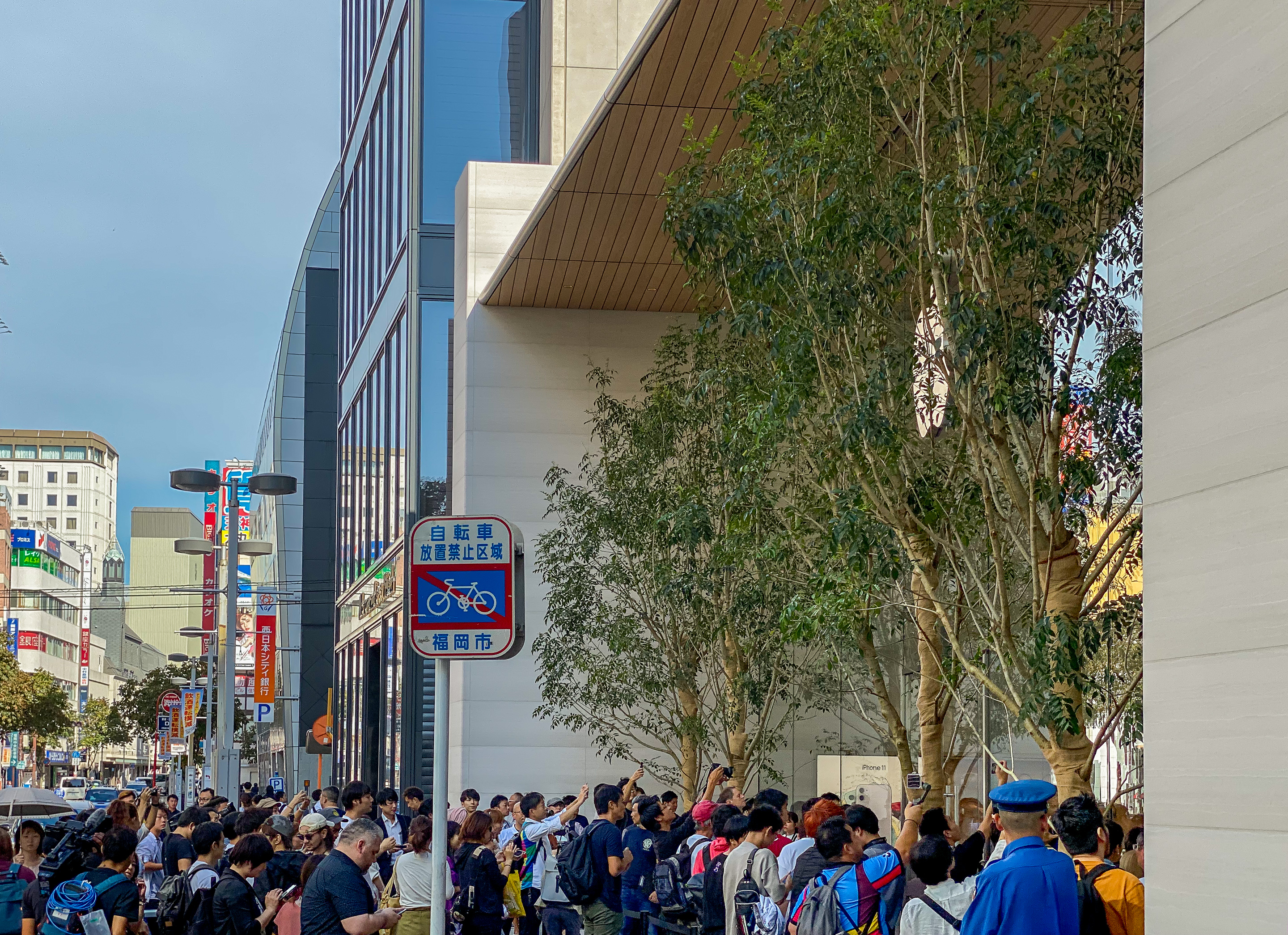 More traditional Shoji screens were used on the upper level of Apple Kyoto to create a calming atmosphere, but Apple Fukuoka’s design is entirely different. The top three-quarters of the store’s back wall are entirely opaque glass, glowing with a gentle warmth. Just below the top of the video wall, the store steps back, carving out a mesmerizing passageway lined with mirrored stainless steel panels. 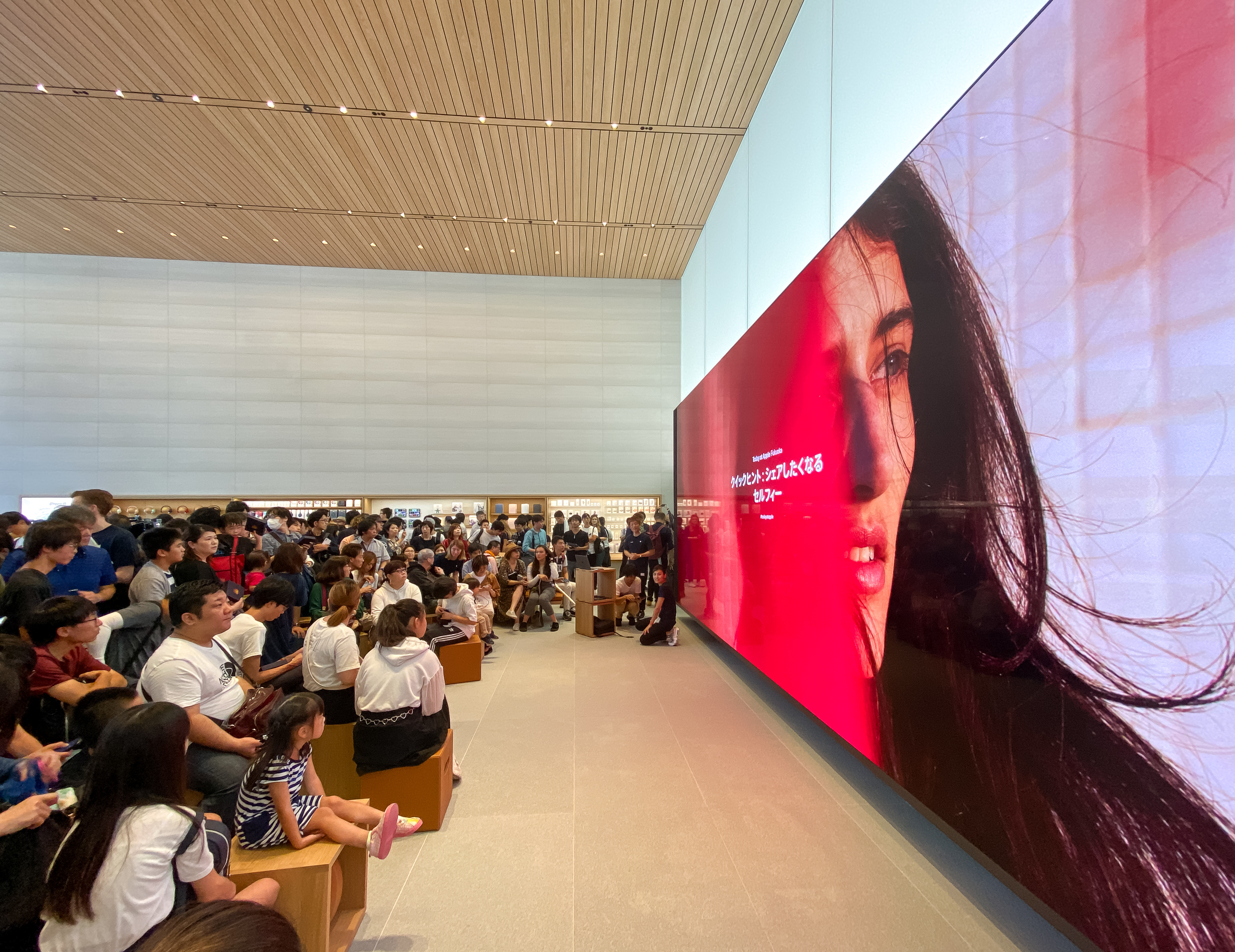 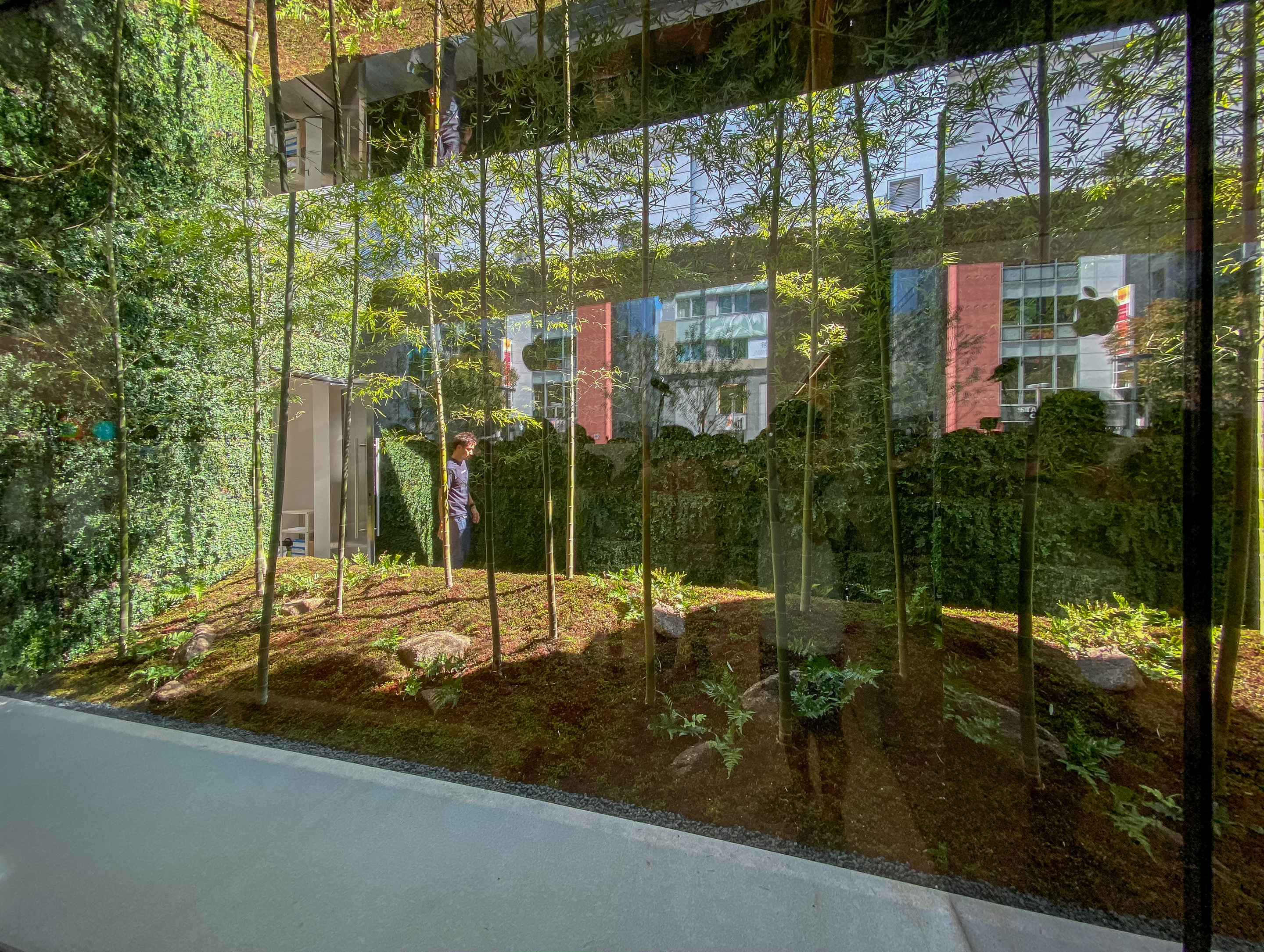 In the passageway, panes of clear glass overlook a Japanese garden planted with bamboo and backed by a green wall. Leather benches are placed in front of the wall to sit and reflect. The garden view carries into the store’s private Boardroom, where ferns and rocks are scattered between the bamboo. The foliage allows the entire store to radiate with a natural aura and distance itself from the busy street outside. 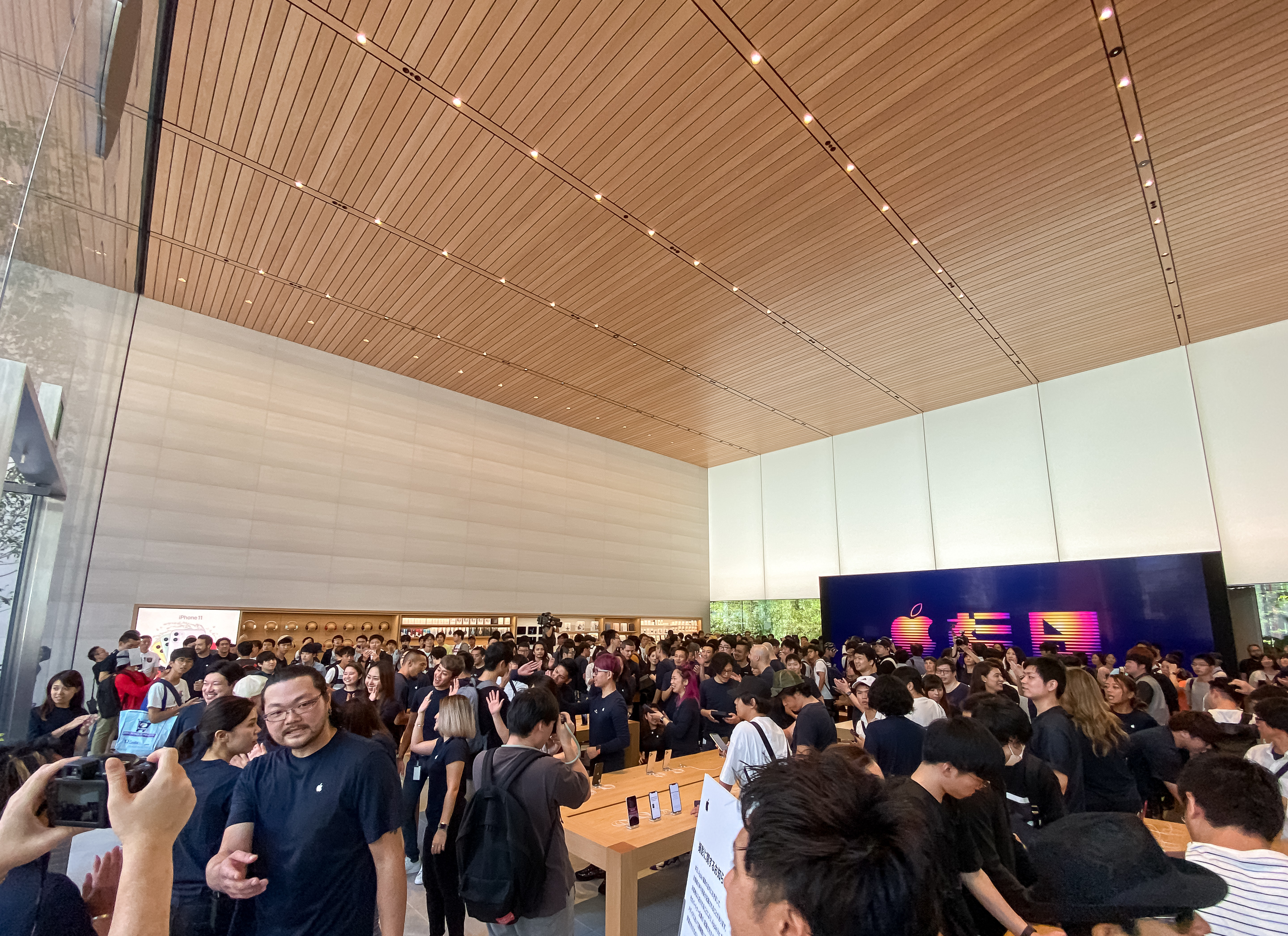 If you can’t pay a visit, Apple has curated an Apple Music playlist and Apple Books collection for the store opening. Three more Apple Stores are celebrating new locations and remodeled spaces on September 28: Old Orchard, Columbia, and Shanghai iapm.