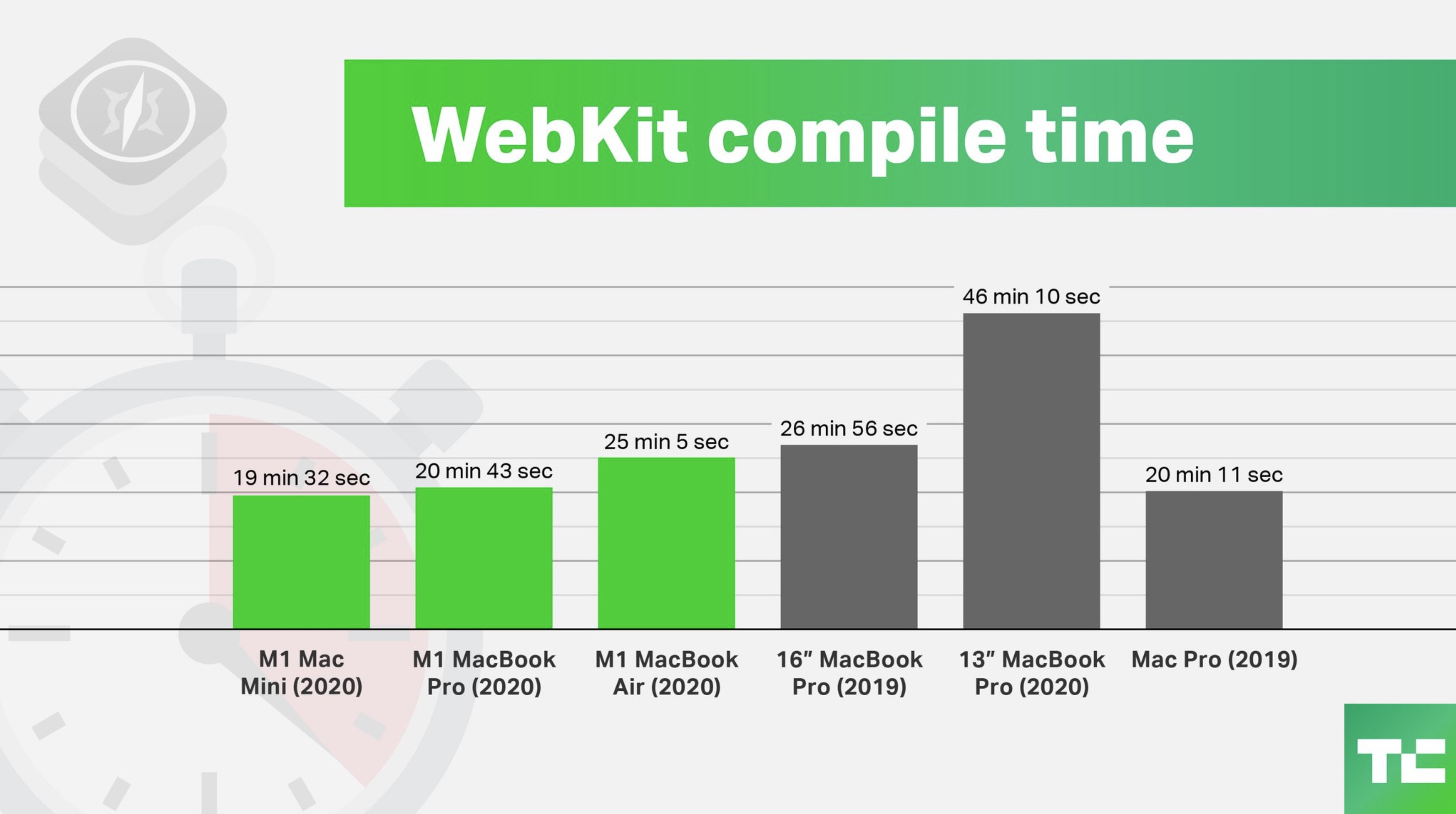 A wave of Apple M1 benchmarks has landed today with reviews of the new Macs as well as the computers now arriving to early customers. We’ve now got some great examples of what the impressive new M1 Mac capabilities mean for real-world performance.

Last week saw the first Apple M1 benchmarks land with the new MacBook Air outperforming the 16-inch MacBook Pro in both single and multi-core scores. Then yesterday we saw the whole Apple M1 Mac lineup beat every Intel Mac in single-core scores and some wild results for Cinebench.

Today with reviews launching and the first M1 Macs landing in customers’ hands, we got lots of validation of those impressive early results from pretty much every benchmark available but beyond that, some powerful examples of just how much a difference the Apple Silicon chips make in real-world workflows.

Developer Paul Hudson shared this example of his M1 MacBook Pro with 16GB RAM rip through an Xcode unzip in just 5 minutes, meanwhile his 8-Core Intel i9 16-inch MacBook Pro with 64GB RAM took over 13 minutes to do the same.

TechCrunch’s Matthew Panzarino found the same 5-minute speed for unzipping the Xcode beta (on all three M1 Macs) although a faster 7-minute time for his 16-inch Intel MacBook Pro than what Hudson saw.

Another neat real-world example of the M1 Mac power is the GIF below showing the machine open all the apps in the dock instantly without any lag. Panzarino highlights “It’s hard to get it to trip up launching anything and the fan almost never goes on.”

While it looks like most accounts show battery life at less than the 15+ hours Apple claims for its new MacBook Air and Pro, they do note much-improved power efficiency and battery life over Intel MacBooks.

Here’s a look at Apple M1 benchmarks for WebKit compiles, putting them faster than Intel MacBooks while using just a fraction of the battery life, like 9 percent battery used compared to 39 or 76 percent! (via Panzarino’s review):

Regarding performance, the M1 Mac mini even beat the 2019 Mac Pro here.

Another interesting observation from Panzarino is that “even when swap did appear, it was not noticeable at all.” He thinks you’ll have to be asking a lot your Mac to need more than 16GB RAM on these M1 Macs.

Finally, an example of real-world gaming from The Verge’s Dieter Bohn playing Shadow of the Tomb Raider on the M1 MacBook Air. The raw performance isn’t huge, but his point is that this is Apple’s base notebook, a fanless machine with an integrated GPU and is able to run the game at 38 FPS.

Bohn also mentions in his review that the M1 MacBook Air “has exceeded almost every expectation.”

As we noted at the time, the new M1 MacBooks still sadly have 720p webcams. Apple says they’ve been improved with a new image signal processor for a better picture, but Bohn and others say it’s still “awful.”

But on the whole, the new M1 Macs are looking phenomenal. What are you most impressed about with the Apple M1 benchmarks and real-world performance we’re seeing? Let us know down below in the comments!