Apple Maps has had a Transit tab since iOS 9, enabling iPhone users to navigate using buses, trains, and other forms of public transportation. 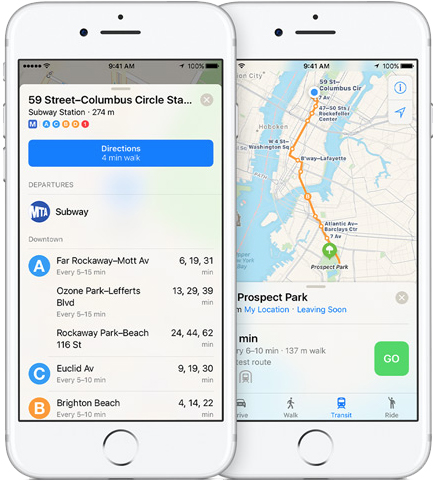 At launch, the feature was limited to Baltimore, Berlin, Boston, Chicago, London, Los Angeles, Mexico City, New York, Philadelphia, San Francisco, Sydney, Toronto, and over 300 cities in China. Since then, Apple has been working to expand support for public transportation to other cities around the world.

Now, there is evidence to suggest that Apple Maps will soon support transit directions in several other cities around the world.

MacRumors reader Bernd Keuning, who keeps close tabs on Apple Maps and has been a reliable tipster, believes that we might soon see transit directions enabled in the following cities and countries, as station outlines visible on the map in each area have increased significantly in the past few weeks:

Keuning also expects Apple Maps to eventually support transit directions in the following cities in the United States and Canada, but it might take longer for the feature to expand to these areas, as only a single or handful of red station outlines have been added over the past few weeks in most of these locations:

Apple Maps typically adds station outlines to a city shortly before expanding support for transit directions to the area. MacRumors has verified that each city listed above does have at least one station outline in Apple Maps.

Keuning believes that the first areas to support Transit in Apple Maps next could include Adelaide, including at least all services from Adelaide Metro and Great Southern Rail intercity service to Melbourne, and the Netherlands, including international trains to Brussel, Berlin, Frankfurt, and possibly Paris.

A complete list of cities that support Transit in Apple Maps is available on the iOS Feature Availability page of Apple’s website.