Apple has not shared details on how its chat extension will work, but Spotify published a blog post detailing the Spotify chat extension, which will undoubtedly share similarities with Apple Music. 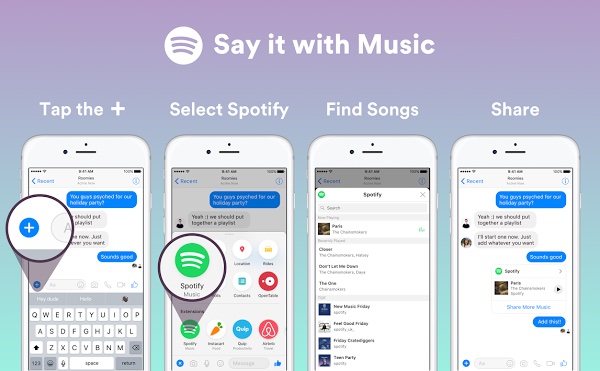 Using the Spotify chat extension, users can search and share Spotify songs, albums, and playlists. Song links will play 30 second clips, with users able to tap on a link to open the Spotify app to listen to a full song.

The Spotify bot, in addition to allowing songs to be shared, will offer up playlist recommendations to users based on mood, activity, and genre. It’s not clear if Apple will introduce a similar feature.

Apple has made an effort to make Apple Music widely available on multiple platforms and services. It already integrates with the main Facebook app, and there’s also an Android app and an iMessage extension.

Spotify is available in Facebook Messenger first, with Apple Music integration coming at a later date.