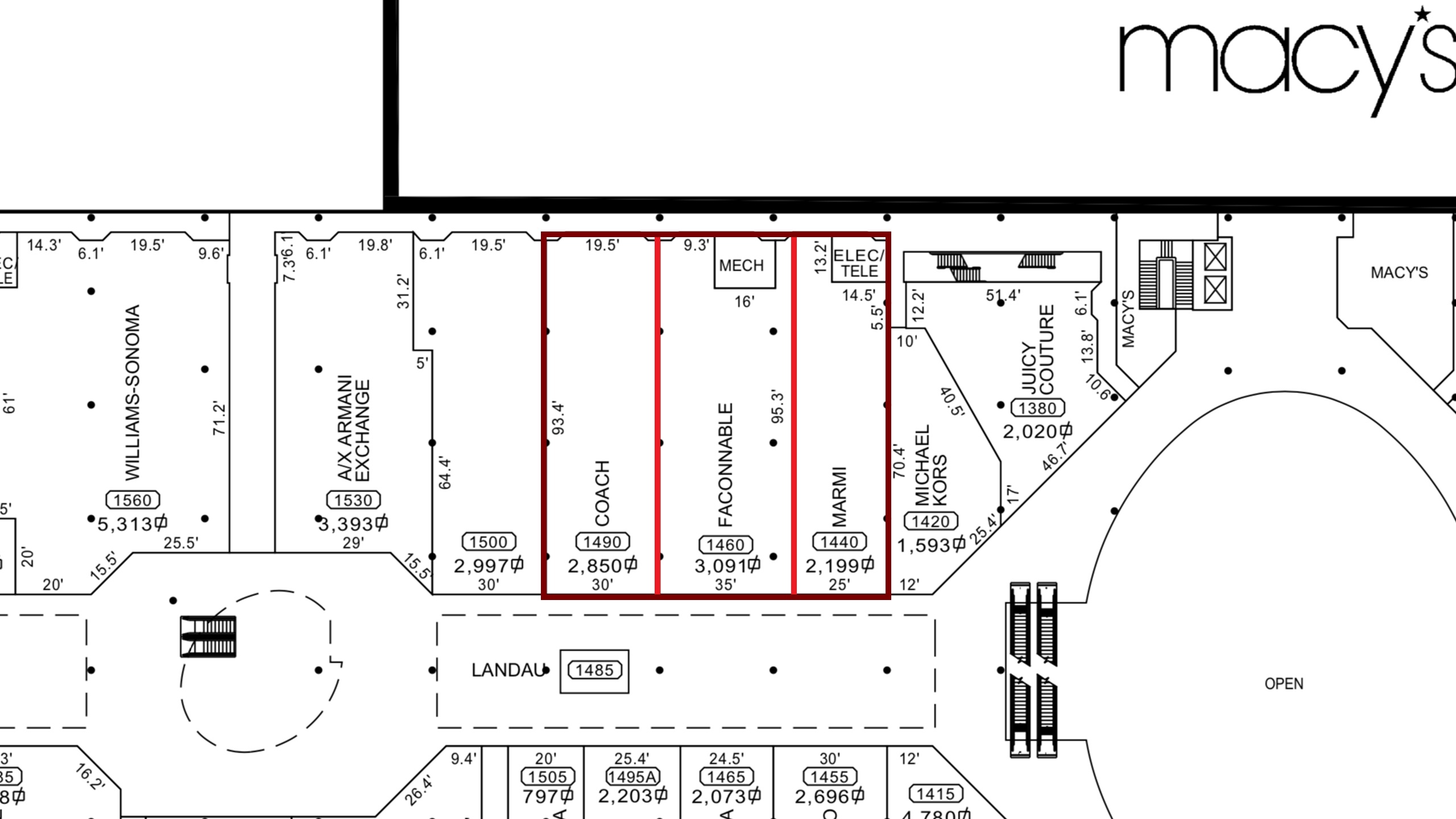 An unusual Apple retail plan is taking shape in Texas. According to public permits filed with the City of Dallas, Apple has secured a tenant location in the Galleria Dallas, a large shopping center less than 10 miles from Dallas Love Field airport. The mall is located midway between four existing Apple Store locations currently serving central Dallas and surrounding communities to the north.

Plans for Apple’s space in the Galleria Dallas indicate that an 8,155 sq. ft. storefront on the mall’s first shopping level is currently being remodeled. Montreal-based firm Sajo, Inc. is listed on the plans, a contractor Apple has worked with in the past on a retail store in Florida. Sajo is also named on building permits for an upcoming Apple Store in Louisville, Kentucky.

Indoor mall construction projects are common for Apple, but the circumstances surrounding this store make it unique. Unlike each of the nine entirely new store sites Apple opened in 2018, the Galleria Dallas is primarily an enclosed suburban mall with a fairly traditional layout.

Apple will occupy a space next to Michael Kors in a hallway adjacent to the mall’s central atrium and ice rink. Smaller stores of this stature are typically limited to remodeling projects that upgrade existing aging storefronts. Apple’s closest store to the south, NorthPark Center, received a Video Wall last year and is not believed to be moving to the Galleria.

Permits show that Apple is renovating suite 1460 for its store. A 2013 mall floor plan reveals that the space is significantly smaller than the 8,155 sq. ft. area applied for. It’s likely that spaces 1490 and 1440 have been merged to create one wider storefront.

In an interview last month with Vogue Business, outgoing retail SVP Angela Ahrendts noted, “We are now opening fewer, larger stores so that you can get the full experience of everything that’s Apple.” Apple filed a Certificate of Occupancy application with the City of Dallas in September 2018 and was granted permission later in October. The decision to open at the Galleria Dallas predates the appointment of Deirdre O’Brien as Apple’s SVP of Retail+People.

Prior to opening new store locations, Apple often embarks on a lengthy hiring process to attract top retail and creative talent. The absence of extensive public recruitment in Dallas could be due to larger forces at work. Multiple sources have indicated that Apple plans to shutter its stores in Plano and Frisco, Texas. These plans could materialize as soon as mid-April. The closure of two stores would allow Apple to redistribute current employees to a new location. No public store opening or closure plans in Texas have been announced by Apple.

Apple typically picks store locations based on foot traffic, proximity to civic centers, and the presence of other premium retailers. In Texas, Apple’s predicted move could be inspired by patent law. The Eastern District of Texas, home to both the Plano and Frisco stores, is a notorious hotbed of patent trolls and exorbitant lawsuits.

Legal woes in Texas have been an ongoing nuisance to Apple for years. In April 2018 alone, the company was ordered to pay $502.6 million in one case after it was ruled to infringe on four VirnetX patents. A lawsuit in July 2018 hinged on a patent related to Apple’s “Do Not Disturb While Driving” feature in iOS. Another in December 2018 claimed that Apple Pay infringes on a patent owned by Texas company Fintiv. Patent troll cases are routinely appealed, but Apple hasn’t been so lucky in every case. In January, a $439.8 million verdict was affirmed.

A 2017 ruling limited patent infringement cases to districts where the defendant operates a “regular and established place of business.” In one Motion to Dismiss for Improper Venue, Apple argued that its two stores in the Eastern District of Texas represent a small part of its business and “if Apple closed those stores, its established business… would not be appreciably or substantially affected.” In a similar case in Delaware, the district ruled that the presence of even one retail store was enough to constitute an established business. 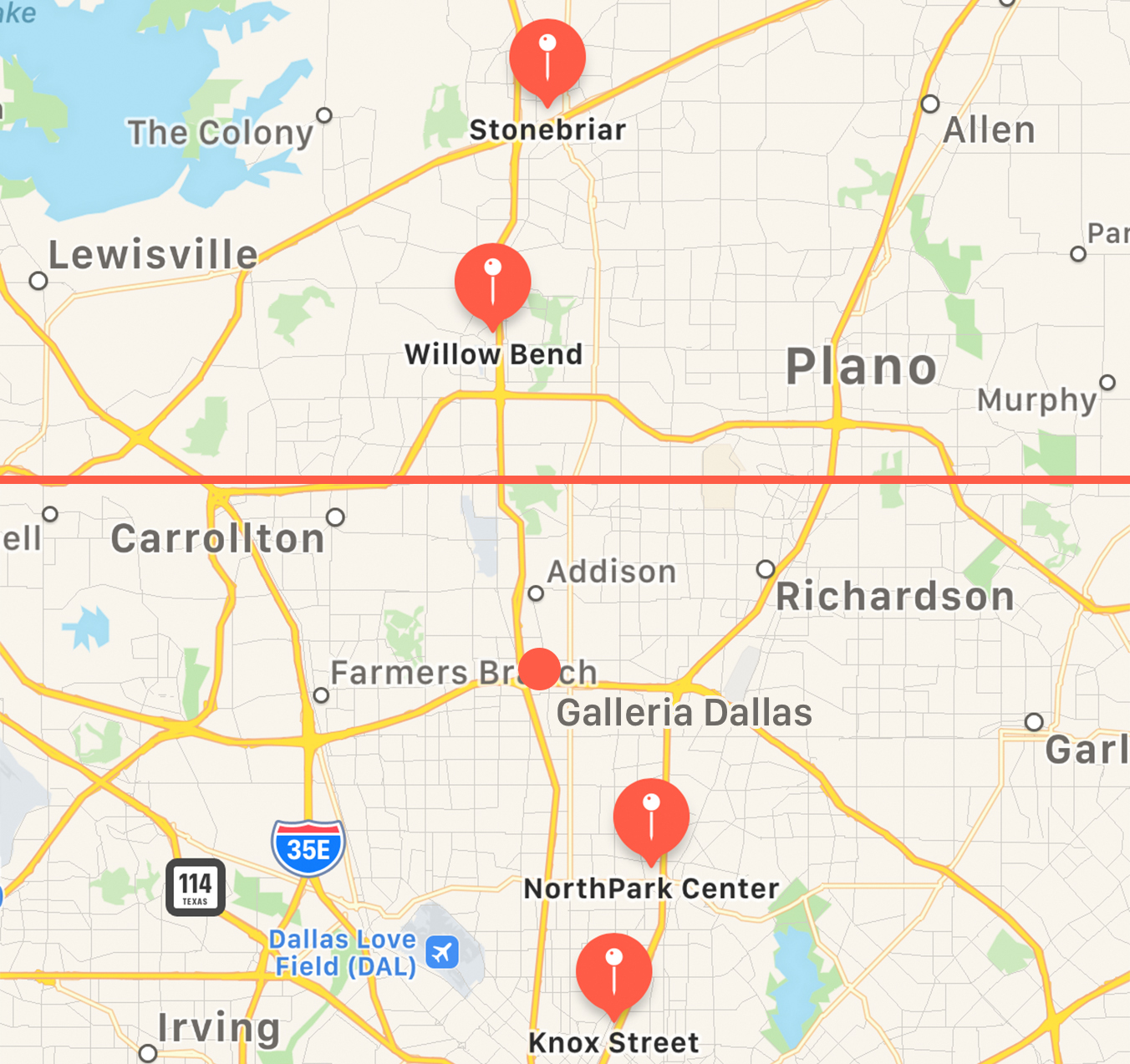 With no easy end to lawsuits in sight, Apple may have decided that removing itself from the Eastern District altogether is more financially sound than continuing to offer a retail presence. By outright closing rather moving its stores just south of the Collin County line to the Galleria Dallas, Apple would create a clean legal break and skirt district boundaries.

Beyond being a curious exception to Apple’s modern retail philosophy, the permanent closure of Apple Stonebriar and Willow Bend would be relatively unprecedented and further strain the capacity of existing stores around Dallas. Apple Stonebriar is less than 10 years old and first opened in August 2009. Apple Willow Bend is the company’s third oldest store and opened less than three months after the historic Tysons Corner and Glendale Galleria locations. Apple Willow Bend was entirely rebuilt in 2016 and reopened just ahead of the launch of the iPhone 7. It would be Apple’s first store with modern fixtures, a Forum, and a Video Wall to ever close.