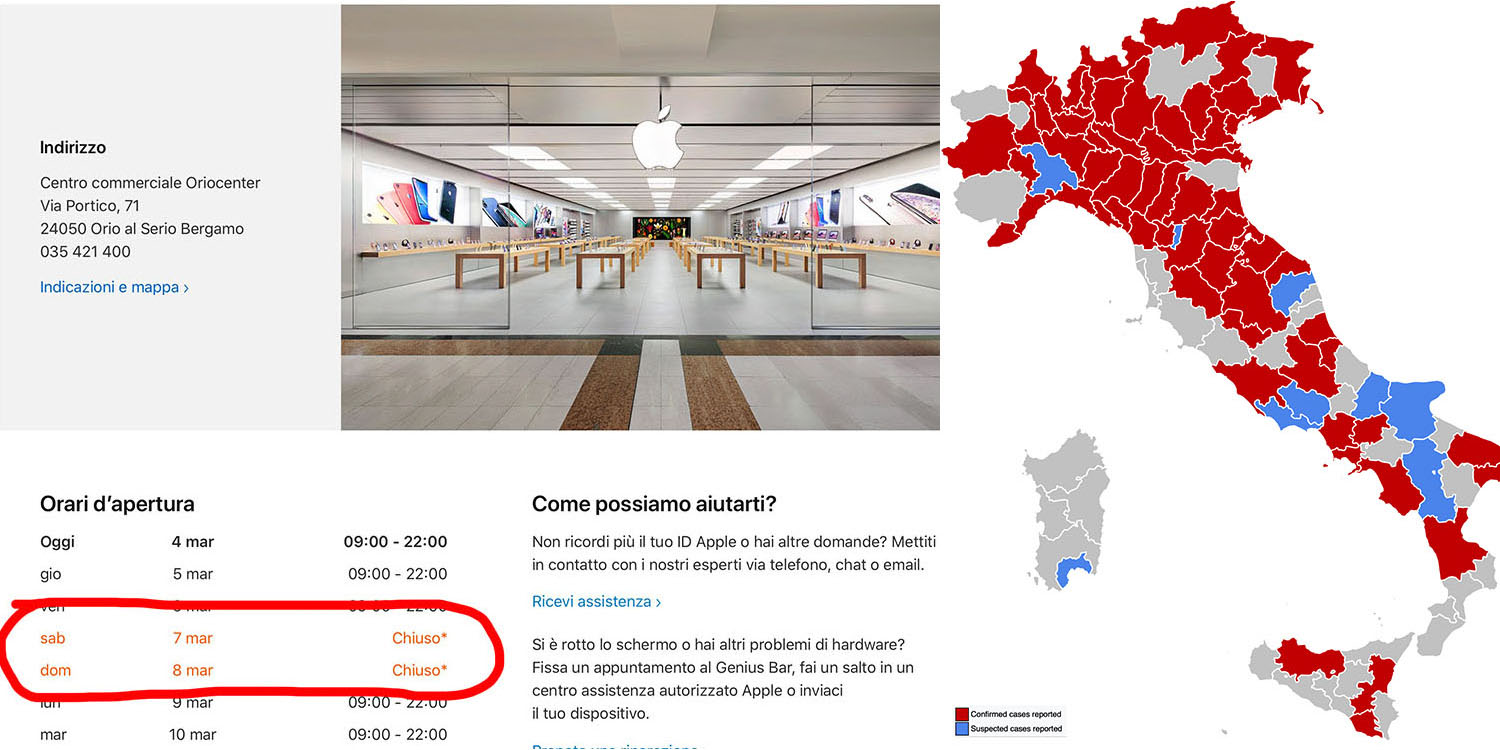 A series of weekend Apple Store closures in Italy are being implemented as the country struggles to contain the spread of the coronavirus COVID-19. Italy has suffered the second-highest number of deaths after China.

Three Italian Apple Stores were closed last weekend, and another one has been announced for the upcoming weekend after a government decree …

Apple is set to shutter [another] mall location, Apple Oriocenter, on March 7 and 8 on orders from the Italian government.

As demanded by a decree of the President of the Council of Ministers issued last week, all medium and large retail stores, as well as commercial establishments within shopping centers, in the provinces of Bergamo, Lodi, Piacenza and Cremona are to close on Saturday and Sunday to prevent spread of the new coronavirus. Similar measures were established for other provinces and territories.

We learned yesterday that Apple has been installing hand sanitizers at store entrances, as well as heavily restricting staff travel.

Apple […] says that “deep cleaning protocols” are its top priority right now. This covers stores, offices, and employee shuttles, Apple says, and hand sanitizer stations have also been placed at the front of stores as well.

Ordering weekend-only Apple Store store closures seems a little odd, but it’s likely that the government is trying to balance containment of the virus against the economic damage that would be done to the country by more drastic measures. With lower footfall on weekdays, it’s more likely stores can enforce use of the hand sanitisers, as well as sanitise demo products after they have been handled. Weekend crowds would make such measures less practical.

Additionally, Apple is cancelling Today at Apple workshops at other stores, likely to avoid putting customers into close proximity for extended periods of time.

The spread in China appears to be slowing, with the latest WHO report showing 130 new cases in the past 24 hours – significantly lower than the hundreds of new cases seen previously. However, there is some concern about possible under-reporting in China, and there were 1,792 new cases outside the country.

Coronavirus infections have now been confirmed in a total of 72 countries, eight of them in the preceding 24 hours. There have been over 3,000 deaths.

However, WHO stresses that the risk to individuals remains low outside of hotspots.

If you are not in an area where COVID-19 is spreading, or have not travelled from an area where COVID-19 is spreading, or have not been in contact with an infected patient, your risk of infection is low. It is understandable that you may feel anxious about the outbreak. Get the facts from reliable sources to help you accurately determine your risks so that you can take reasonable precautions (See Frequently Asked Questions). Seek guidance from WHO, your healthcare provider, your national public health authority or your employer for accurate information on COVID-19 and whether COVID-19 is circulating where you live. It is important to be informed of the situation and take appropriate measures to protect yourself and your family (see Protection measures for everyone).

See the very short video below for key facts.