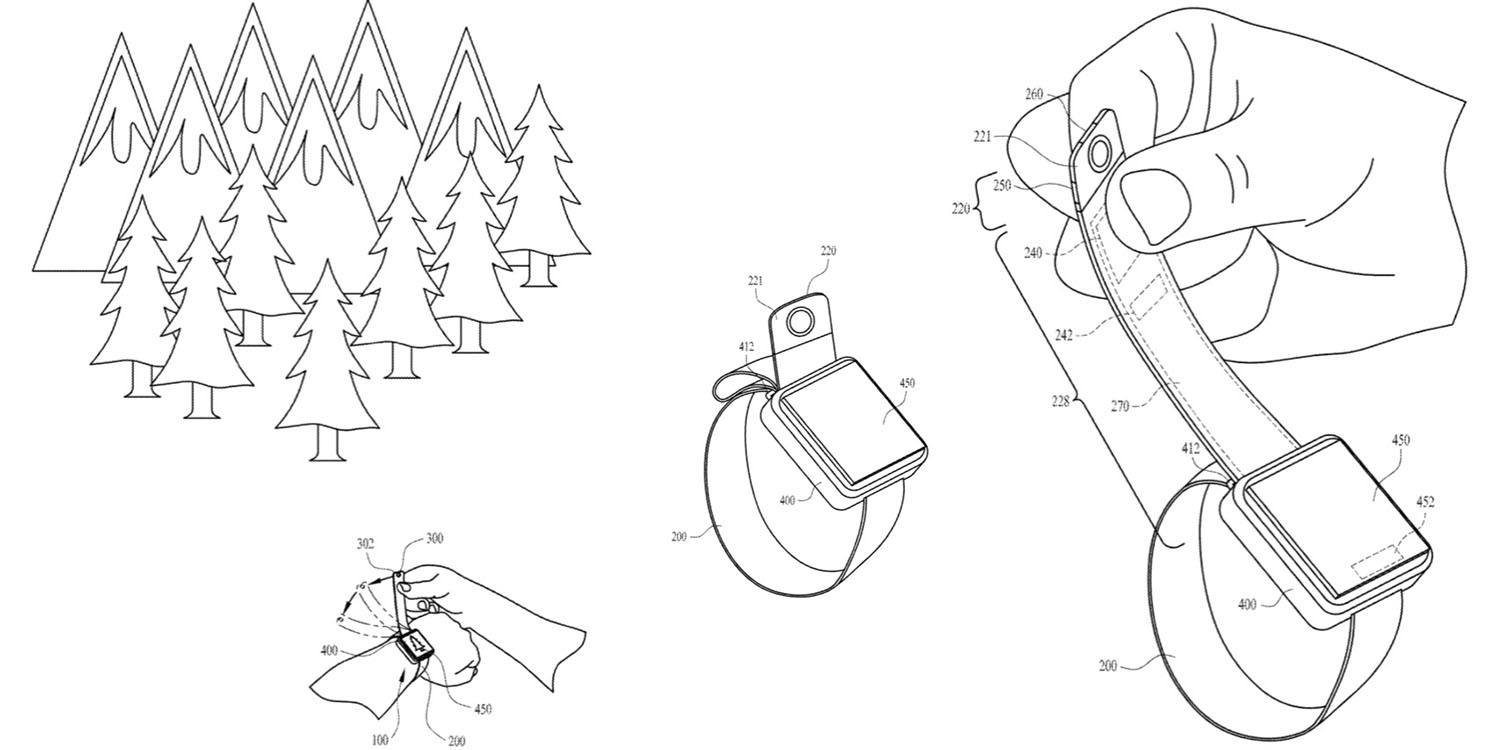 An Apple Watch camera is one of the things that could make it more practical for the wearable device to eventually replace an iPhone.

But even if Apple included a camera in a future watch, there’s an obvious problem …

How do you give people the freedom to frame the photo as they wish, while still allowing them to see the image on the display of the Watch?

That’s a problem Apple tackles in a patent granted today.

Apple’s proposed solution is to integrate the camera into part of the band, rather than the Watch itself. You’d be able to pull out a section of the band, which would be flexible so you can angle it as desired. The lens itself would rotate on the end of the band for complete flexibility.

A potential barrier to smartwatch adoption is their minimal image-capturing ability. Some embodiments described herein include a smartwatch with the functionality of a camera that is independently positionable relative to a watch body. This can allow the smartwatch to capture images and video at angles and orientations that do not depend directly on the angle and orientation of the rest of the smartwatch, including the watch body. Such functionality can replace or at least meaningfully augment a user’s existing camera or camera-enabled device (e.g., smartphone, tablet). Such a wearable device that captures images and video may do so via an optical lens integrated into a distal end portion of a watch band that retains the device on a user’s wrist.

But what about FaceTime? It would be awkward to have to hold the Apple Watch camera in place. The patent has a solution to that too.

Just as iPhones have cameras on both sides, so too could a Watch band – and they could include the ability to shoot 360-degree video.

There could also be several different ways to actually take the photo.

The optical sensor may capture images or video when the user takes an affirmative action such as pinching the camera watch band, giving a verbal command, pressing a button on the distal end portion of the camera watch band, or pressing a button on the case (e.g., on the screen of the display, which may include a graphical input on a touchscreen of the display).

Apple says the invention would free us from the need to carry an iPhone, at least some of the time.

A smartwatch that has the capability of capturing images and video may provide an opportunity for users to be more reliant on their smartwatch and less reliant on other devices (e.g., smartphones, tablets, digital cameras) to capture images or videos. Thus, a smartwatch with the capability of capturing images or videos may enable a user to forego carrying a smartphone when doing some activities, especially activities or environments where it would be difficult to take a smartphone (e.g., hiking, running, swimming, surfing, snowboarding, and any number of other situations).

In our poll, a third of you said there was a better-than-even chance that an Apple Watch could replace your iPhone within a few years.

We of course add our usual patent disclaimer: Apple patents all kinds of things that never make it into production. Is this one that should? Let us know your thoughts in the comments.