Last week we reported that Apple had emailed all iTunes Affiliate Program members to inform them that its commission rate for all apps and in-app content would be reduced to 2.5 percent on May 1, down from 7 percent, globally.

The news came as a blow to app review and discovery websites like AppShopper and TouchArcade that depend on the commissions to generate revenue.

However, this morning MacGamerHQ posted an email communication from iTunes Affiliate Support that casts doubt on Apple’s original announcement. 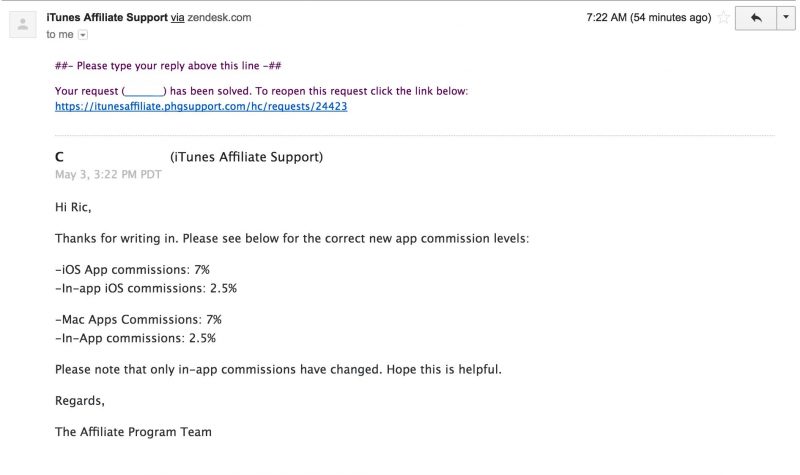 The message above was received in response to a query about whether Mac apps would be impacted by the commission changes. As shown, the email states that iOS and Mac app commissions remain at 7 percent, while only in-app commissions will fall to 2.5 percent.

If the affiliate team’s information is accurate, then the change in commissions does not apply to individual app purchases, as Apple originally stated.

MacGamerHQ notes that several affected site owners and bloggers are still seeing 7 percent commissions come through for iTunes affiliate links, despite the fact that the changes were meant to come into effect on Monday. We’ll make sure to update this post if/when Apple clarifies the situation.