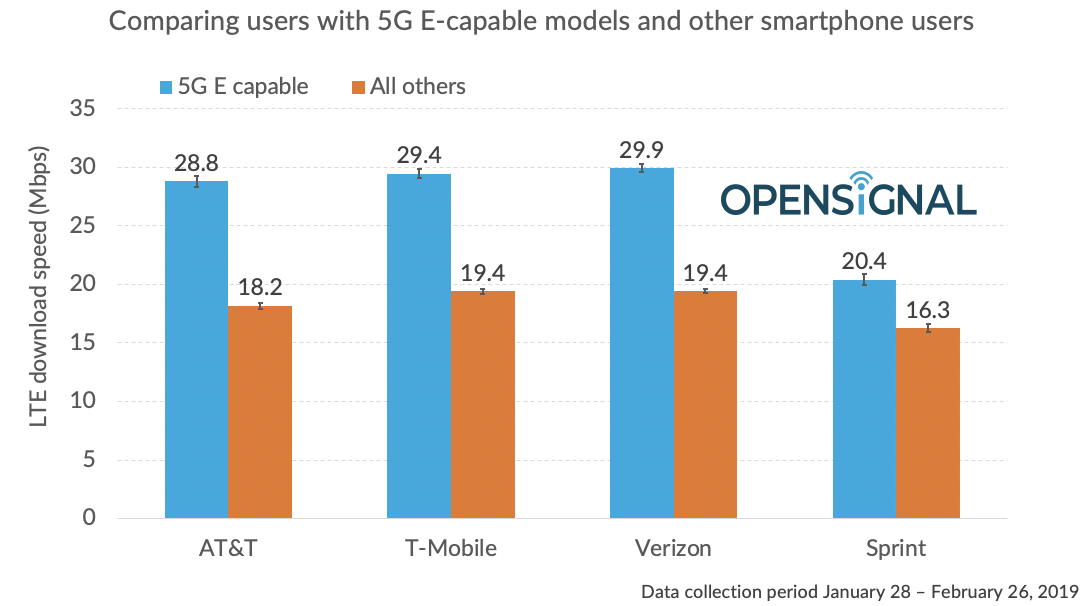 AT&T’s push of ‘5G E’ networking has been nothing but controversial, and now a new study casts even more doubt on the technology. Opensignal today published the results of a study that compared the speeds of AT&T’s 5G E network to Sprint, T-Mobile, and Verizon 4G LTE.

The results from the test show that the performance of AT&T’s 5G E network is comparable, if not worse than, the performance of traditional 4G LTE networks of AT&T and Verizon. In the graph below, Opensignal shows that “5G E capable” devices, which include the latest iPhones, performed better on T-Mobile and Verizon than they did on AT&T.

Opensignal also compared AT&T’s 5G E network to its 4G LTE network speeds. That test showed that AT&T’s 5G E is in fact better than its LTE network, but does not deliver on the improvements that 5G is supposed to bring for consumers.

AT&T users with a 5G E-capable smartphone receive similar speeds to users on other carriers with the same smartphone models that AT&T calls 5G E. The 5G E speeds which AT&T users experience are very much typical 4G speeds and not the step-change improvement which 5G promises.

“If one service is offering a meaningful boost over another, it’s not unreasonable for it to be labeled differently, just not with a name that confuses customers,” Opensignal CEO Brenden Gill said in a statement.

AT&T, of course, is refuting the results of this study. The carrier said in a statement to CNET that Opensignal’s test was flawed in its procedure:

“Speed test data purporting to show the ‘real-world experience of 5G Evolution’ without verifying the capable devices were tested in a 5G Evolution coverage area as shown by the indicator does not accurately represent the 5G Evolution user experience,” the company said in a statement.

AT&T’s 5G E network has drawn industry-wide criticism. Earlier this month, Sprint slammed AT&T in a full-page New York Times ad, criticizing its “false and deceptive marketing campaign” surrounding 5G E. AT&T, however, has defended the controversial branding by saying it serves as a way to inform consumers that they are in an area of enhanced service.

Apple has played into AT&T’s 5G E branding. iOS 12.2, which is currently in beta testing and expected to be released later this month, replaces the AT&T LTE logo with ‘5G E’ in certain markets.