Recently Apple provided long-awaited updates to its iMac lineup, and although there are no cosmetic changes to be found in the 2019 iMac, these machines feature noteworthy CPU and GPU improvements under the hood. In fact, CPU options now start at 6-core processors for the base 27-inch model, a notable boost over the strict 4-core configurations from the previous refresh. If you desire more processing power, then the new iMacs, with their updated Intel CPUs and AMD GPUs provide a substantial performance upgrade.

Given the new upgraded processor options, it’s no wonder why people are quick to compare the 8-core model to the entry-level iMac Pro. But as you’ll see in this video, there’s more than just processor performance that makes the iMac Pro the beast that it is. On this latest episode of the Back to the Mac, we discuss five takeaways from Apple’s 2019 iMac refresh.

The 2019 iMac refresh is everything you’d expect from an iMac. It features the same familiar design, with the same beautiful 5K display. The 5120×2880 5K display, and the all-in-one form-factor are still some of the best things about the iMac — it’s a compelling package that still serves users well after all of these years.

The base-model 27-inch iMac starts at $1799, and is still a fairly good value considering you’re getting one of the best high-quality 5K displays on the market. It’s just a shame that you still can’t use these 5K machines as standalone displays like you could with iMacs back in the day.

2. Fusion drives are way past their prime

The $1799 model includes, for the most part, respectable specs: a 3.0GHz 6‑core Intel Core i5 that turbos to 4.1GHz, Radeon Pro 570X with 4GB of GDDR5 memory, and 8GB of 2666MHz DDR4 memory. Unfortunately, these entry-level machines still ship with Fusion Drives, which means there remains a mechanical spinning hard disk inside your computer.

The 5K iMac loaner unit that I’ve been testing has the upgraded 8-core CPU, but I intentionally requested that everything else be left the same, because I wanted to test out the least expensive configuration with an 8-core CPU. This configuration, which forces you to go with a slight GPU speed bump (Radeon Pro 575X), costs $2499 — half the cost of the iMac Pro.

Fusion Drives, while not quite as bad as the slow 5400 RPM drives that Apple still (!) includes inside its base-model 21.5-inch iMacs, are nowhere near as speedy as the pure solid state media found in the base model iMac Pro. Of course, Apple allows you to upgrade to an SSD (up to 2TB on the top-end 27-inch model) but you’ll pay handsomely for the privilege.

The fact there is a spinning disk inside the iMac Pro means that there’s a huge bottleneck in the chain that severely dampens the performance of the machine. For example, I wanted to copy a 500 GB Final Cut Pro X Library to an external SSD, and it took nearly an hour to do so. The performance, in this case, was hindered by the Fusion drive.

But it doesn’t stop with basic file transfers. Nearly everything is affected by the slowness of the Fusion drive, from exporting videos with Final Cut Pro X, to transferring files via a 10GbE Thunderbolt 3 dongle.

Any file of substantial size that needs to be read from or written to the machine’s internal Fusion Drive is subject to severe slowdown, which is disappointing given the otherwise speedy components inside of the 2019 iMac. If you want performance that’s closer to that of an iMac Pro, opt for a build-to-order 5K iMac with an SSD, and avoid the Fusion Drive at all costs.

In order to understand the real world performance of the 5K iMac, I compared it with the iMac Pro in a Final Cut Pro export test. This simple test involved exporting a roughly 10 minute 4K project to an H.264 video with a 45,000 kbps bitrate. The 8-core 2019 iMac with Fusion drive performed close to a real-time export of 11 minutes and 5 seconds. Testing the same export on my base model iMac Pro yielded a much better time of 6 minutes and 23 seconds. In this case, the long export time for the 2019 iMac was heavily influenced by the Fusion Drive.

When I moved my Library to a much faster OWC Express 4M2 external SSD, the results were much more in line with what you would expect from such a powerful machine. Export times for the same project dropped to just 5 minutes and 27 seconds, which is even faster than the iMac Pro. This illustrates how the Fusion Drive impedes the performance of the machine, acting as a critical bottleneck. 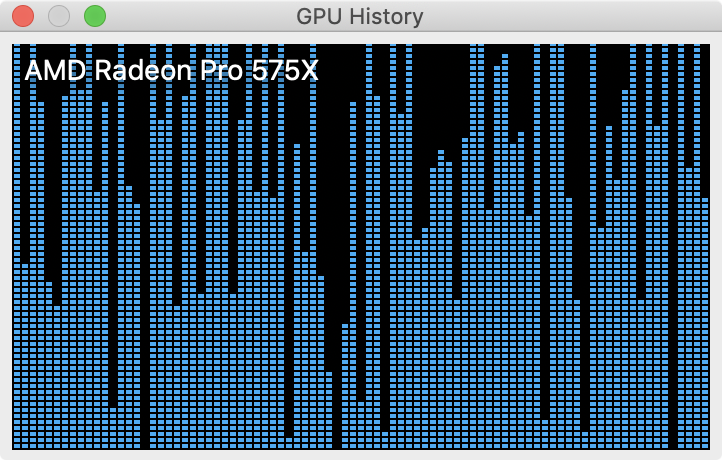 The slow Fusion Drive results in overall system inefficiency, as the machine is not able to access the data fast enough to process it as quickly as it is capable of. This is well illustrated by comparing the GPU history of the AMD Radeon Pro 575X when exporting video from the Fusion Drive versus the aforementioned Thunderbolt 3 SSD. 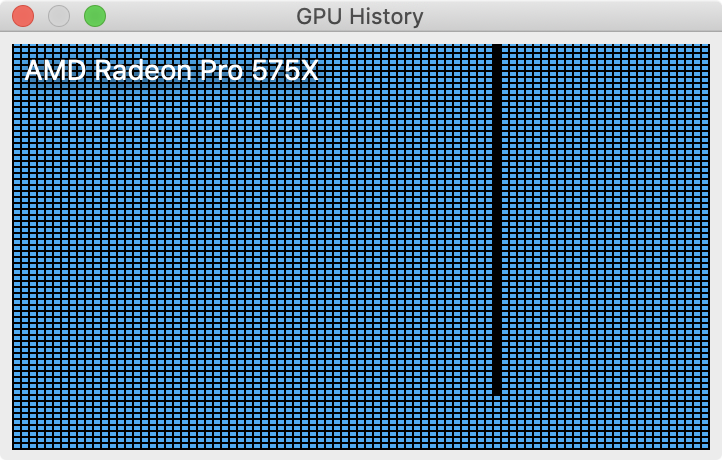 One of the most impressive things about the 2019 iMac is that, for half the price of a $5000 base model iMac Pro, you get CPU performance that goes toe to toe and even bests the iMac Pro in some respects, especially in single-core performance. When comparing sheer CPU performance, indeed the 27-inch 8-core 5K iMac puts out impressive numbers. 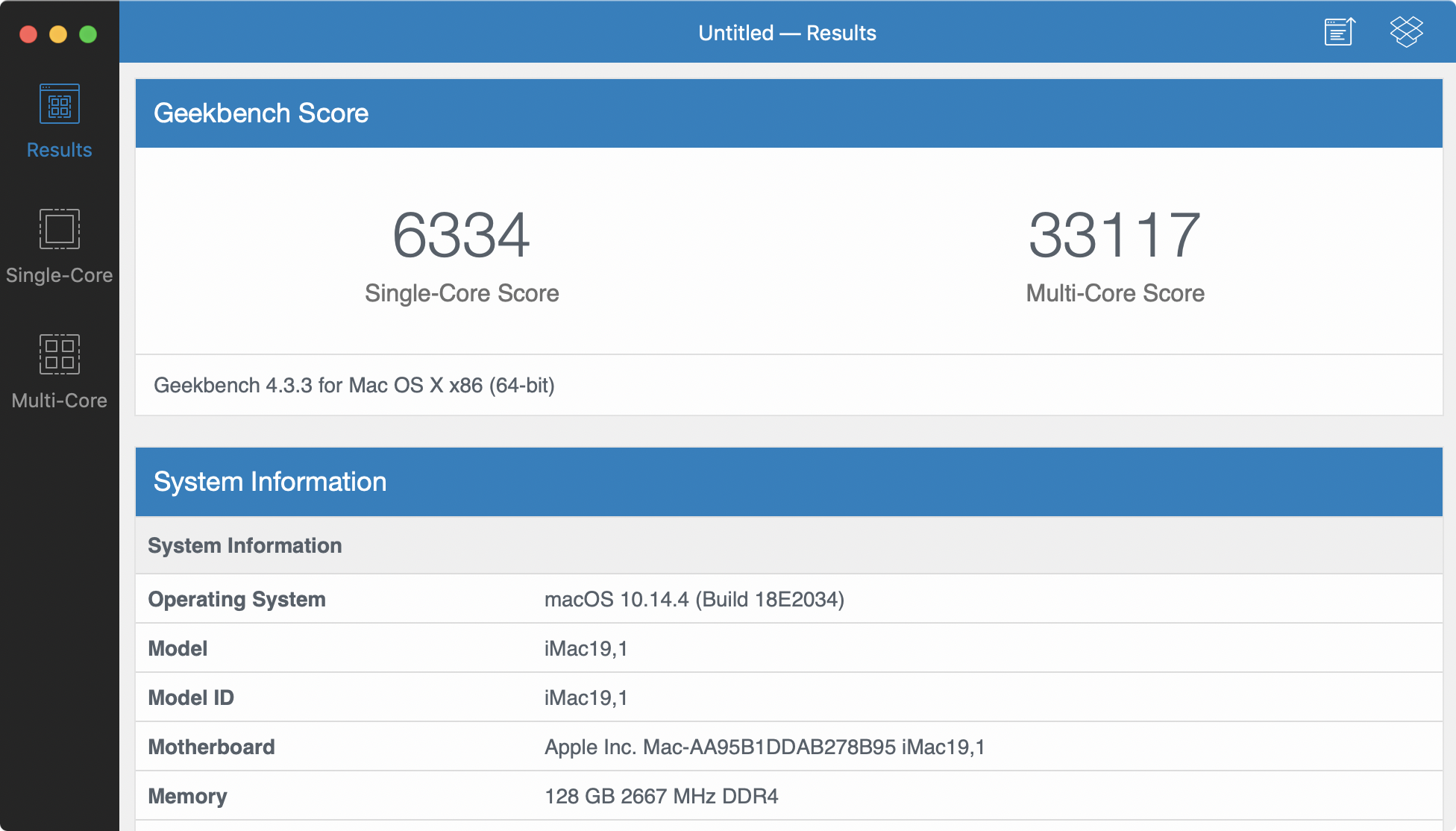 The GPU options on the new iMac, while an improvement over its predecessors, still trail behind the powerful Radeon Pro Vega 56 inside the base model iMac Pro. And Apple recently updated the iMac Pro build to order options with a Radeon Pro Vega 64X, which provides even more compute power. 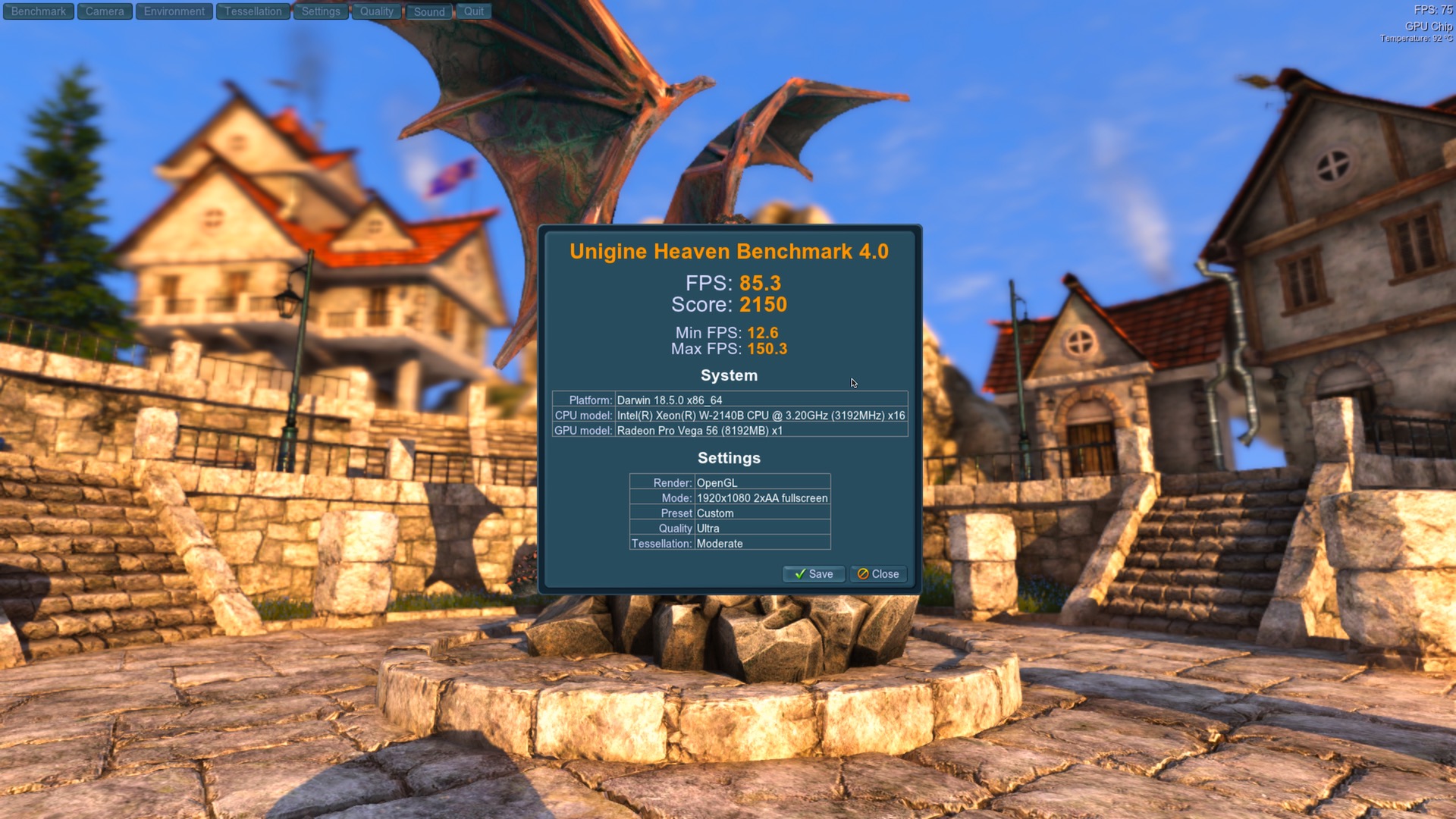 As you can see, the Radeon Pro 575X on my $2499 iMac is no match for the Radeon Pro Vega 56 GPU in the base model iMac Pro, which is to be expected given the price difference. That’s not to say that the 575X is bad, because it isn’t, but if you regularly engage in activity that’s particularly GPU-intensive, it might be worthwhile to consider upgrading during the build to order process. 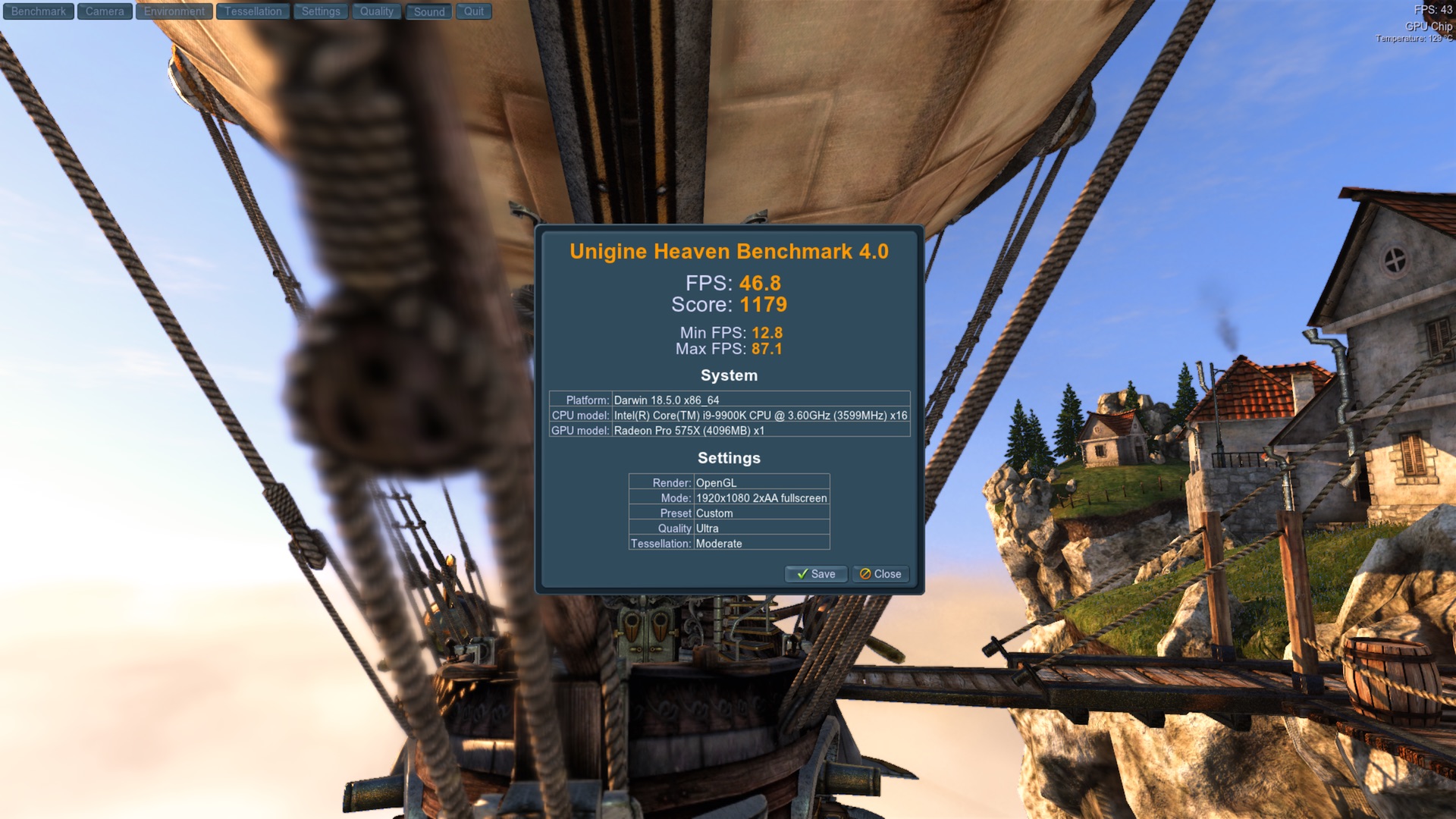 As an iMac Pro user going on two years, I tend to forget how nice this machine is when it comes to its limited fan noise. I can edit videos in Final Cut Pro X and record voiceovers without the fans spinning up to be loud enough for my microphone to pick it up.

With the 5K iMac, almost as soon as I start recording a voiceover in Final Cut Pro X, the fans spin up. The fans are much more likely to make themselves known on the 2019 iMac than the iMac Pro.

Although the iMac Pro RAM can be upgraded by an Apple-certified repair shop, RAM upgrades on the 2019 iMac can be performed easily by the end user. The new iMac is capable of addressing up to 128GB of RAM, as we demonstrated in our recent iMac RAM upgrade tutorial.

As impressive as the raw performance numbers of the 8-core 5K iMac may be, it remains inferior to the iMac Pro in a few key ways. Outside of the aforementioned storage differences, the biggest differentiator is the amount of Thunderbolt 3 I/O found on the iMac Pro. 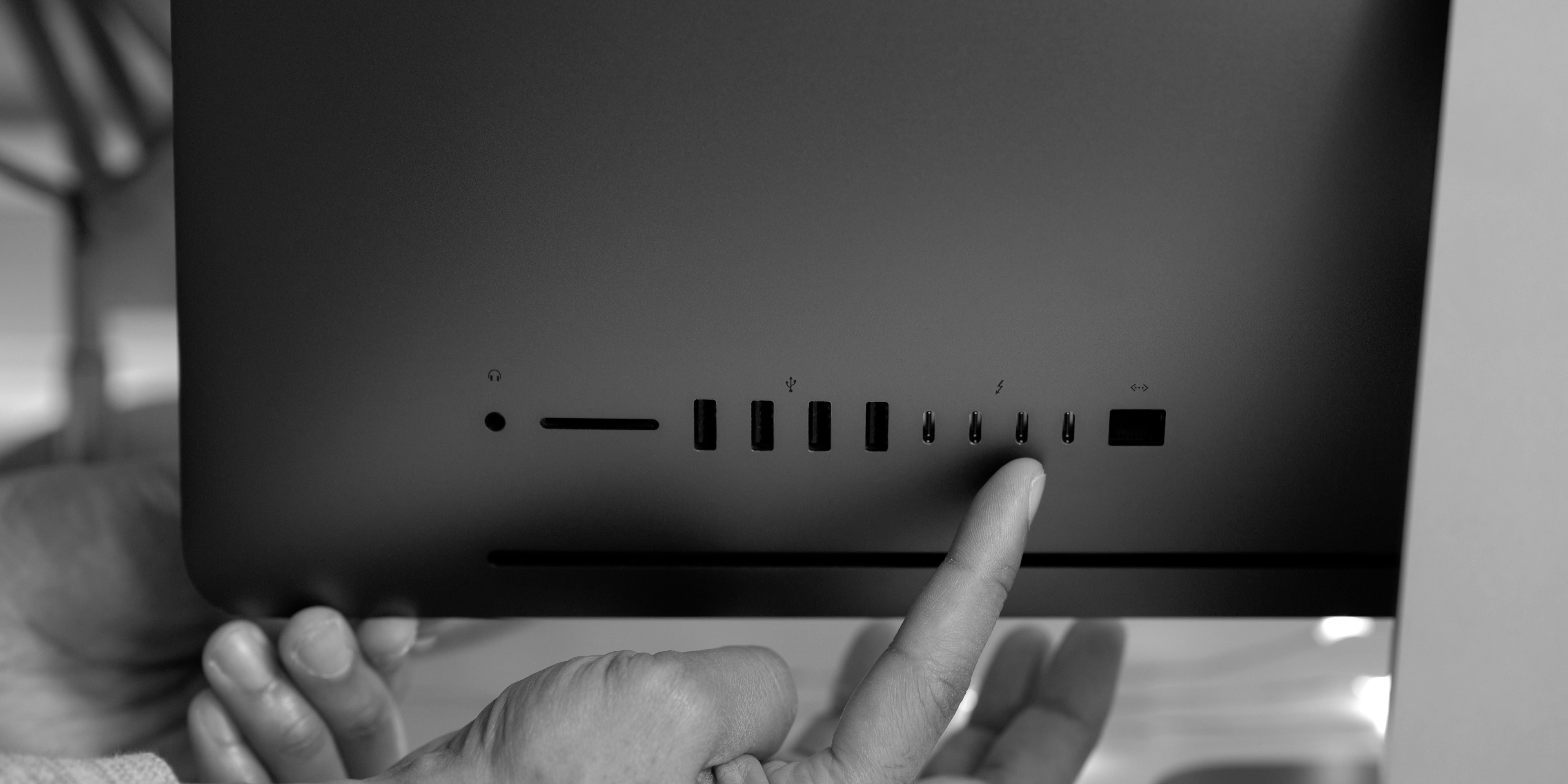 In addition to the differences with Thunderbolt 3, discerning users will also find a slower SD Card reader. The iMac Pro supports UHS-II SD Cards, while the 5K iMac does not. The speed difference between UHS-II cards and standard cards is definitely noticeable when importing large batches of RAW photos or 4K videos.

The last big I/O differentiator has to do with Ethernet connectivity. The regular iMac features a standard Gigabit Ethernet port, while the iMac Pro features a much faster 10GbE port. I personally use 10GbE to connect to a Synology NAS on my network that acts as a go-between and media storage backup device for my editing workflow. The lack of 10GbE on the 2019 iMac means that I have to connect a 10GbE Thunderbolt 3 adapter, like this one we reviewed from Akitio, which uses up a free Thunderbolt 3 port.

The 5K iMac provides great processing power, and for regular, day-to-day usage, it has more than enough power under the hood. That’s assuming, however, that you opt for the SSD upgrade, and stay away from the Fusion drive.

I acknowledge that the Fusion Drive is passable for those who do nothing more than web browsing and email, but having a mechanical disk drive inside the iMac, when literally every other product that Apple sells comes with flash storage, feels wrong and outdated.

But at least users have the option of upgrading to flash storage. When it comes to I/O, even the maxed out version of the 5K iMac can’t compete with the iMac Pro. The lack of a UHS-II SD Card reader, the lack of 10Gb Ethernet, and most importantly, the limited Thunderbolt 3 I/O, can prove to be a real hinderance for certain creative workflows. 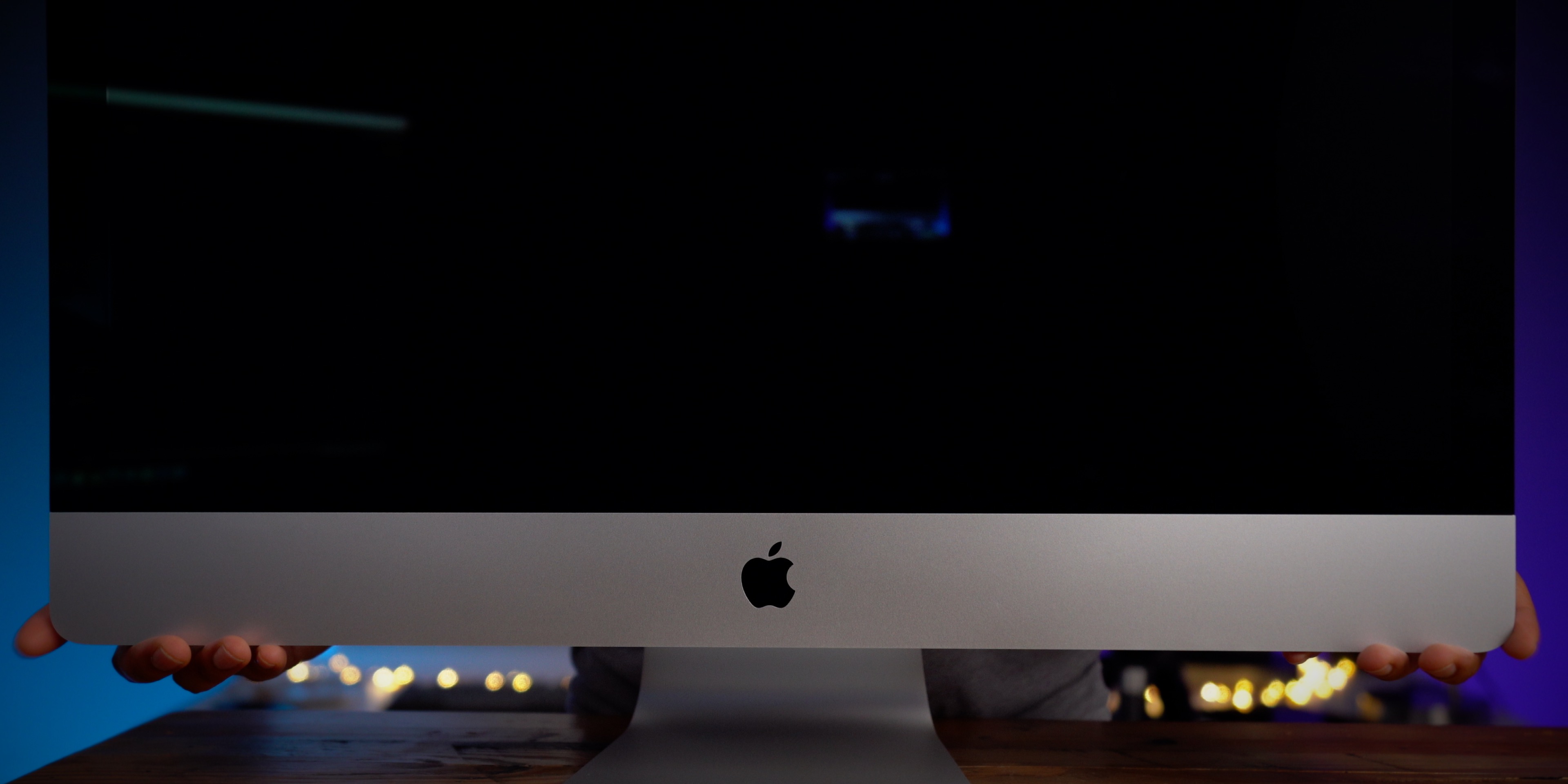 All of that said, the 2019 27-inch iMac provides a good value if you make sure to avoid the Fusion Drive If your workload demands that you do so. Even if that means just booting from an external USB SSD, you’d still be better off than you would when using the Fusion Drive.

What do you think about the 2019 5K iMac? Sound off in the comments below with your thoughts.