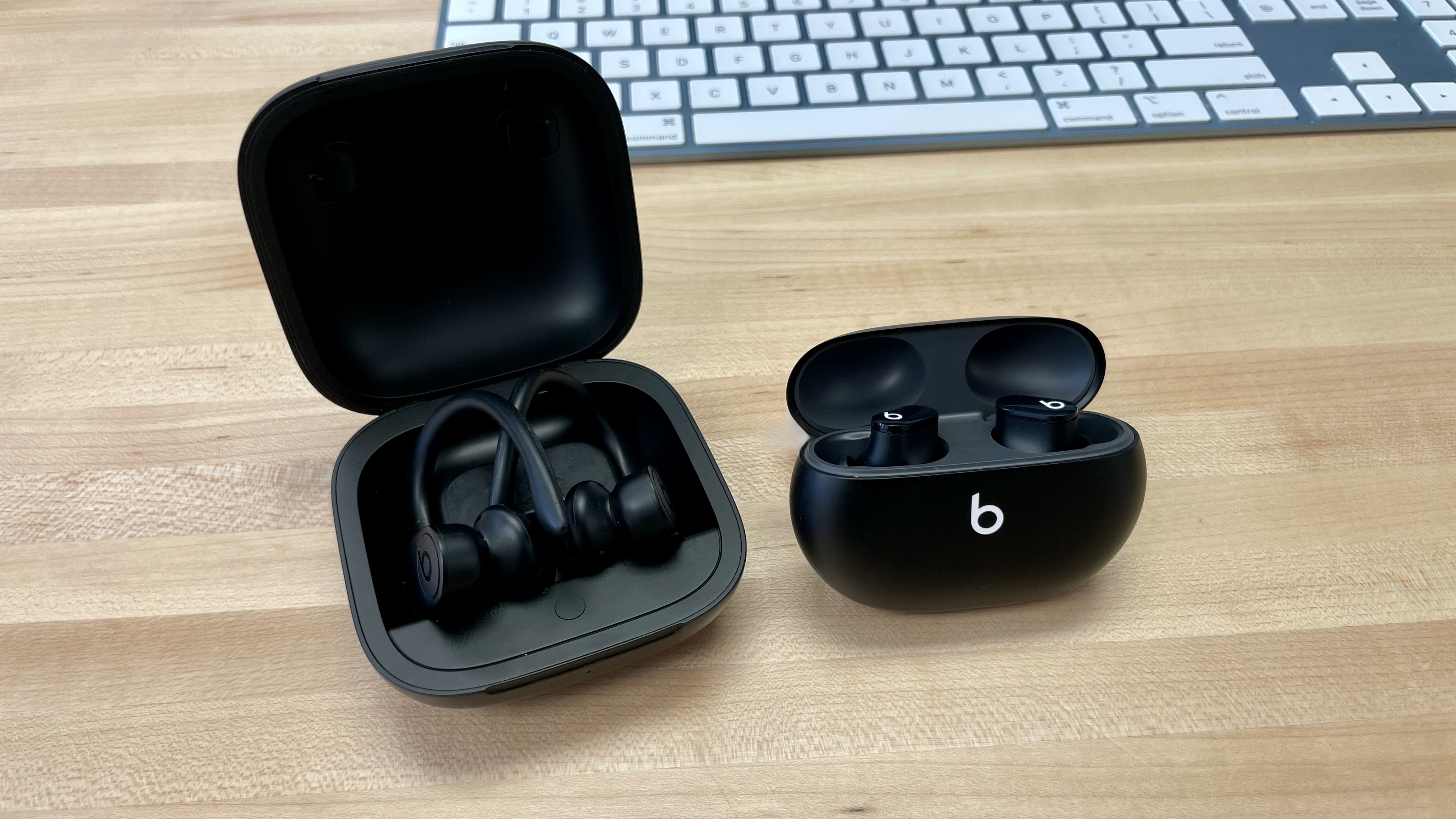 As announced this morning, Apple’s lineup of truly wireless headphones is expanding today. Beats Studio Buds are available today for $149.99, and with features like Active Noise Cancellation and Transparency mode, they could just be the best option for buyers today looking for a more affordable option than AirPods Pro and Powerbeats Pro.

I’ve been using Beats Studio Buds for the past two weeks, and there are some interesting compromises here, including a mysterious custom Beats chipset instead of Apple’s own W1 or H1 chip. Head below for my thoughts.

If it were me, I’d choose the compact and in-ear design of Beats Studio Buds over the larger and ear hook design of Powerbeats Pro. The more apt comparison here are AirPods Pro, which come in at $100 more expensive.

As far as fit is concerned, the Beats Studio Buds feature an in-ear design, again similar to AirPods Pro. You get three different ear tip sizes to choose from in the box, so there’s quite a bit of versatility when it comes to finding the perfect fit.

I’ve been testing Beats Studio Buds in many different environments: casual wear around the house, in the gym, for phone calls, and at my desk. In practice, I’ve found Beats Studio Buds to be both comfortable and versatile. Just as importantly they also remain in my ears even when working out and being active.

This is a notable difference compared to AirPods, which use a one-size-fits-all “universal” design without customizable ear tips. AirPods simply rest right inside your ears, which some people find more comfortable. In my experience, however, the universal design of AirPods means the earbuds aren’t as secure in my ears.

Finally, Beats Studio Buds are available in three different colors: red, black, and white. It’s nice that Beats is here to serve the market of people who want truly wireless earbuds in colors other than white, unlike AirPods and AirPods Pro.

The issue with a stem-less design could be the lack of physical controls, but that’s not the case with the Studio Buds. Beats has found a clever way to turn the tops of each bud into a physical buttons for playback control. Here are the details on how this works:

A nice perk is that you can customize the control for the “press and hold” trigger to activate Siri as well. For instance, pressing and holding on the right earbud could cycle between ANC and Transparency mode, while pressing and holding on the left earbud could activate Siri. But again, there is also support for “Hey Siri,” so physical controls to access the voice assistant isn’t necessarily required.

If there’s one downside to this design, it’s that it’s pretty easy to accidentally trigger one of the controls when you adjust an earbud’s fit in your ear. For example, if one of the buds is sliding out of your ear, there’s a good chance you’ll accidentally activate the pause/play control when adjusting the fit.

Beats could have chosen a capacitive design for Beats Studio Buds, or gone without physical controls of any sort. This would have been understandable, albeit disappointing, given the stem-less design. Thankfully, there are tactile controls instead.

Beats Studio Buds feature 5 hours of battery life with ANC or Transparency mode enabled, or eight hours without either enabled. Combined with the charging case, you get 24 hours of playback. Notably, the charging case itself features a USB-C port, which is a nice touch compared to Lightning ports that Apple uses on AirPods, AirPods Pro, and Powerbeats Pro.

The downside here, however, is that Beats Studio Buds case doesn’t feature any sort of wireless charging. You can just drop AirPods or AirPods Pro onto a wireless charger for quick power, but that’s not the case with Beats Studio Buds. They do, however, feature Fast Charge technology to add an hour of playback in just five minutes when the battery is low.

In my testing, Beats Studio Buds seem to live up to the claims when it comes to battery life. Using them for phone calls will drain the battery quicker than just listening to music, but that’s to be expected since you’re actively using the microphone. If battery life is a concern while on the phone, I recommend using one bud at a time and leaving the other one in the charging case.

One quirk is that it’s pretty tricky to figure out how to place the buds themselves back into the charging case. The secret here is that the Beats Studio Buds actually go in upside down, but even after two weeks, it still takes me a few tries to get this right.

Deep integration with iOS… sort of

Like all Beats products nowadays, the Beats Studio Buds feature deep integration with iPhone, iPad, Apple Watch, and Mac. They pair with your devices via the same card-style interface as AirPods or via the Settings app, but they’re using some secret sauce here that is very interesting.

The Beats Studio Buds are powered not by Apple’s proprietary W1 or H1 chip, but rather by a proprietary Beats chip. This means you miss out some of the more useful features of AirPods and AirPods Pro, as well as Powerbeats Pro, but it allows Beats Studio Buds to work across the Android and iOS ecosystems.

Other than those missing features, I haven’t had any issues with the performance or pairing of Beats Studio Buds. The Bluetooth 5.0 connection is stable and consistent, and pairing is fast and reliable across all devices. There is also support for Spatial Audio in Apple Music.

Beats Studio Buds also feature integration with Apple’s Find My application. When paired via Bluetooth, this allows you to locate the your lost Beats Studio Buds using their last known location or by playing a sound. Unfortunately, this is similar to AirPods and is pretty rudimentary Find My support. Eventually, I’d really like to see both Apple and Beats incorporate the U1 chip for improved Find My integration independent of Bluetooth.

But the Beats Studio Buds also extend beyond the Apple ecosystem. For Android users, there is support for fast pairing and the Find My Device application.

Sound quality is hard to judge and I won’t pretend to be an expert here. Here’s what Beats says about the sound quality:

Studio Buds were designed and engineered to prioritize high-quality audio playback and overall comfort — no matter if you’re listening to music, streaming a movie or chatting with a friend. The ergonomically tilted acoustic nozzle features a laser cut micro-vent to ensure pressure relief on the eardrum.

Its powerful, balanced sound is driven by the proprietary 8.2mm, dual-element diaphragm driver, which features a central rigid piston with a flexible outer surround. Coupled with a two-chamber acoustic design, Studio Buds achieves outstanding stereo separation and low harmonic distortion across the frequency curve so you hear every note.

In practice, Beats Studio Buds sound quite nice, particularly for the modest $150 price point. In my testing, the Beats Studio Buds sound is not quite as rich and full as Powerbeats Pro or AirPods Pro. This isn’t necessarily surprising given the $100 price difference and the more compact design, but it’s something worth noting. The sound quality is similar, if not identical to, the entry-level AirPods.

Who should buy Beats Studio Buds?

If you’re shopping for truly wireless earbuds that feature deep integration with Apple devices, you have a wide array of options nowadays.

After spending the past two weeks with Beats Studio Buds and comparing them to AirPods, AirPods Pro, and Powerbeats Pro, I struggle to find a reason to recommend AirPods now. As long as you find the in-ear design comfortable — and not everyone does — Beats Studio Buds are the real deal despite the lack of an H1/W1 chip.

With Beats Beats Studio Buds, you get ANC support, Transparency mode, fast pairing with Apple devices, stellar sound quality, and a versatile in-ear design, all packed into an incredibly compact form factor. There are limitations, such as the lack of in-ear detection and wireless charging, and no H1 or W1 chip, but the value is there with a $150 price point.

Ultimately, the Studio Buds are proof the Beats brand is alive and stronger than ever, and certainly not going anywhere anytime soon. There are compromises to hit the $149.99 price point, but the pros more than outweigh the cons if you don’t already have AirPods Pro or Powerbeats Pro.

Beats Studio Buds are available to order today for $149.99 on Amazon.