Skateboarding graphics, linocut prints, and the Apple Pencil inspire designer Neil Vilppu. His distinctive illustration style is the product of merging traditional and contemporary ideas. It’s this willingness to experiment that has led Neil to success in a workflow that combines the creative freedom of the iPad Pro with the powerful familiarity of the Mac.

As a full-time Marketing and Branding Designer, Neil knows that inspiration can strike at any time. Ideas for client illustrations and personal projects outside of his day job can begin as sketches on the edge of meeting papers or sticky notes. These idea seeds are photographed and brought into Procreate on the iPad for refinement.

“I grew up in a house where both parents were traditional illustrators and painters,” Neil says. “Being exposed to traditional art mediums has played a big role in how I approach creating digital work.” With a concept in mind, sketching begins in Procreate. This critical stage forms the soul of the image and can set up an idea to succeed or fail. Blue pencil lines form the illustration’s general composition. A second layer in red adds detail and roughs in light and shadow.

In traditional graphic design, this tool was known as a non-photo blue. Art scanners were unable to detect the blue lines, rendering them invisible in a finished composition. Neil witnessed his father practice the technique building animations and has now adopted a similar workflow. He notes that drawing over the initial sketch in red helps visually separate the stages of his illustration’s development.

From Procreate, Neil moves his concepts to Affinity Designer on the iPad to begin the final illustration. He uses his favorite tools carried over from Adobe Illustrator — the pen, pencil, and pathfinder operations — to complete the majority of the vector work. Intricate shapes and negative space reference the century-old technique of linocut printmaking. 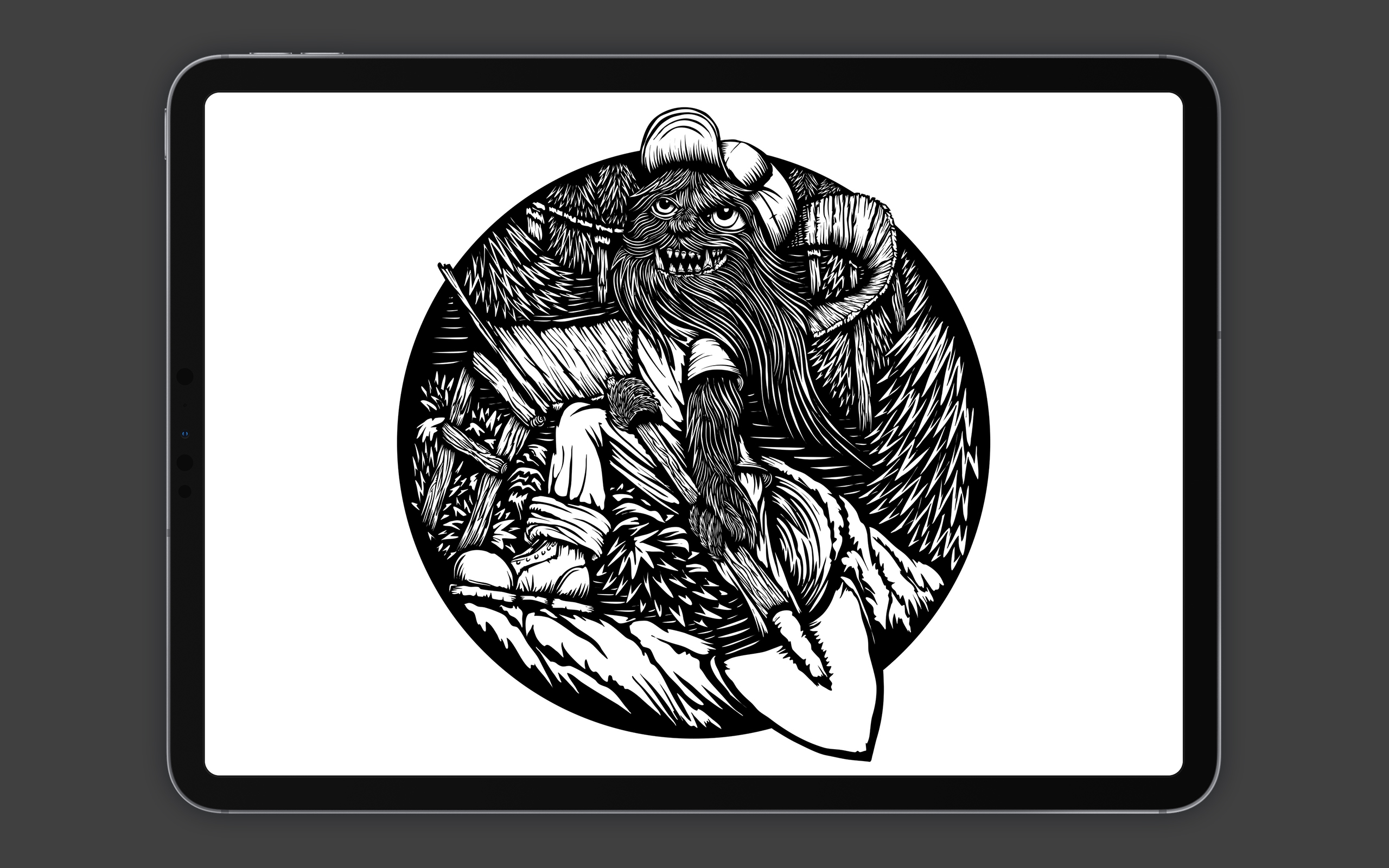 “Traditionally, this work was made by starting with a wood block or a linoleum tile,” Neil explains. “The artwork is cut into the block and then ink is applied to the surface. Any area that was cut into on the block won’t transfer ink to the surface of the paper.”

Neil simulates the effect digitally by beginning with a black layer over his artboard and “carving” it away with vector tools.

Many illustrators have chosen the iPad because iOS and the Apple Pencil provide unmatched fluidity and responsiveness for drawing. But when it comes to putting the finishing touches on a new piece of artwork, Neil has found the Mac to be a longstanding familiar friend. The flexibility and precision offered by macOS enables an extremely efficient workflow.

“Once the black and white vector illustration is complete, I will export an EPS file from Affinity Designer to Dropbox where I then open it up in Adobe Illustrator on my desktop,“ Neil describes. He finds the handoff between both applications relatively smooth. “Once the EPS is opened in Illustrator, you’ll see one layer containing all of the vector shapes. In Affinity, I group elements and portions in their own respective layers. But that’s strictly for the ease of isolating different portions of the illustration in that stage.”

Neil uses Illustrator for colorization and typesetting before publishing a piece. Easy shape manipulation with a mouse and keyboard, global colors, and artwork recoloring flexibility make Illustrator and the Mac more efficient for finish work that doesn’t require the Apple Pencil. The same reason Neil prefers the iPad for conceptual illustration also informs his decision to embrace the traditional interface found on the Mac. “It’s a tool that gets out of the way and lets me create without having to give the mechanics of it much thought.” 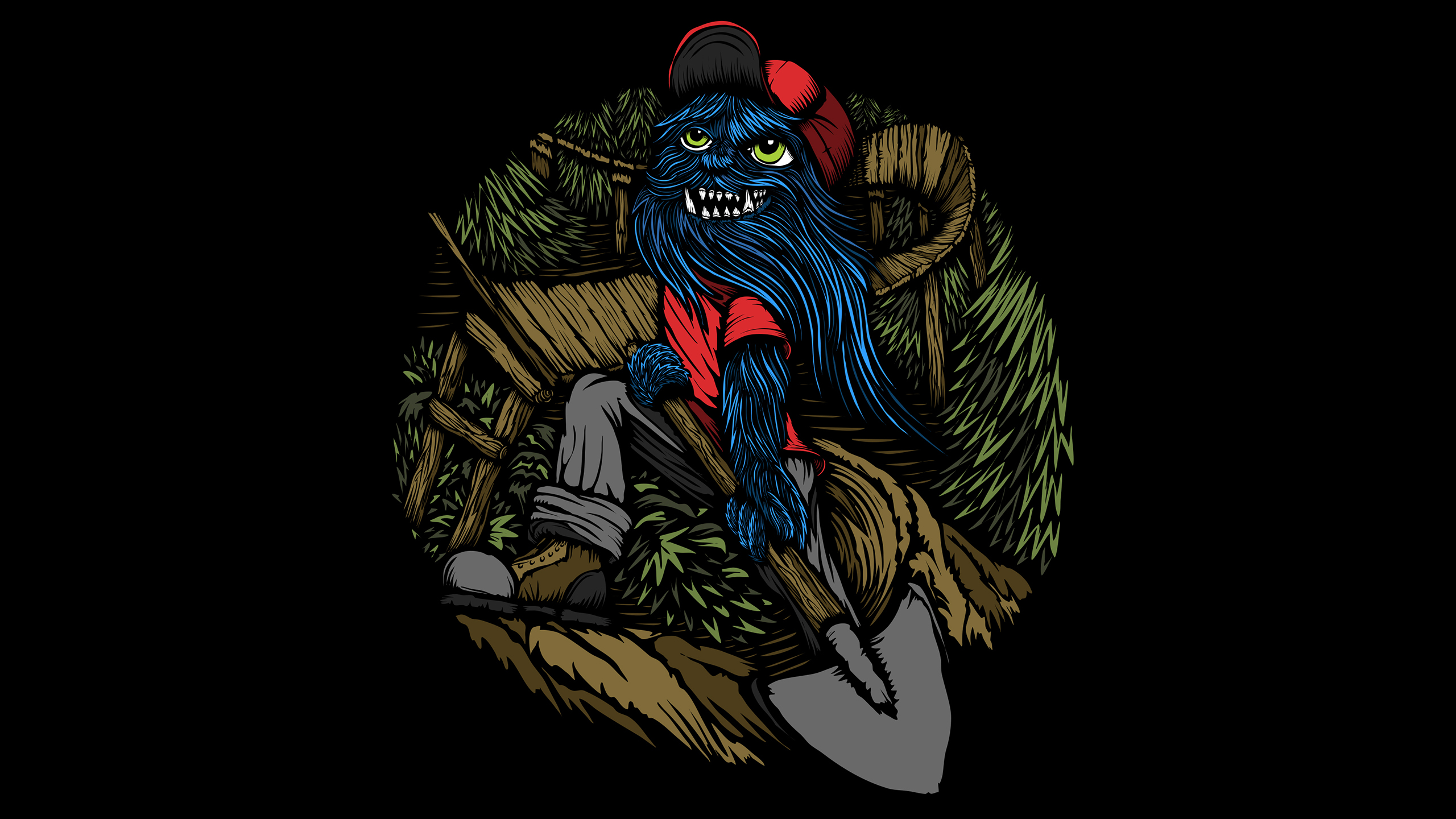 You can learn more about Neil Vilppu’s work on his website.