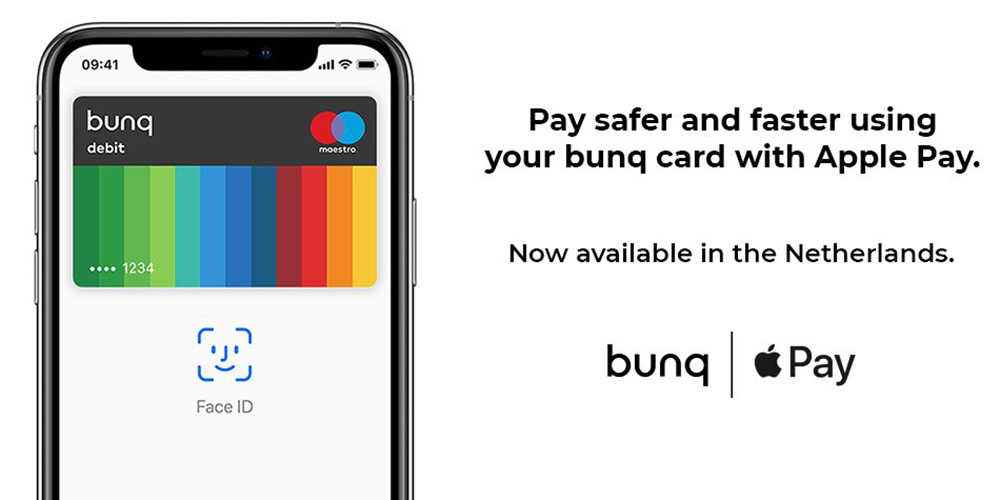 Bunq made the announcement today …


We are excited to announce that Apple Pay is available in the Netherlands.

Now you can pay safer and faster using your bunq card with Apple Pay!

Bunq also noted that Apple Pay is available to its customers in France, Belgium and Ireland.

The bank says that you’ll need one of the following accounts to qualify:

This suggests that it is not available with the free account.

A tweet says ‘other exciting things’ will be announced tonight.

Starting today, all our users in the Netherlands can set up and start using Apple Pay in just 5 minutes! Learn more on how to get #ApplePay in the Netherlands here https://t.co/CCNxS1oDxs and be sure to see what other exciting things will be announced tonight in #bunqUpdate12 🚀 pic.twitter.com/4zuylSCWU6

Bunq became a bank in 2015 after initially launching as a Fintech firm handling payments. Its main USP is that it offers much easier setup and management of multiple accounts, including sub-accounts for specific purposes which it says can be ‘opened in seconds.’ For physical cards, the bank offers two PINs, the choice of which determines which account will be debited.

Monese also tweeted that it too now offers Apple Pay support in the Netherlands.

Pay safer and faster using your Monese cards with #ApplePay. Now available for our customers in 🇳🇱 the Netherlands! pic.twitter.com/6f0cb8Y4zI

Monese also launched in 2015, and was created after its founder moved to the UK and was refused a bank account as he had no financial history in the country. The bank primarily targeted immigrants, with a promise that there were no residency or credit score requirements.

Store listed by Apple as accepting Apple Pay in the Netherlands include Adidas, Aldi, Amac, Arket, BP, Burger King, H&M, Lidl, McDonalds, MediaMarkt, Starbucks and T-Mobile. However, contactless payments are very widely accepted in the country, so Apple Pay should work for at least lower-value transactions in many retailers.