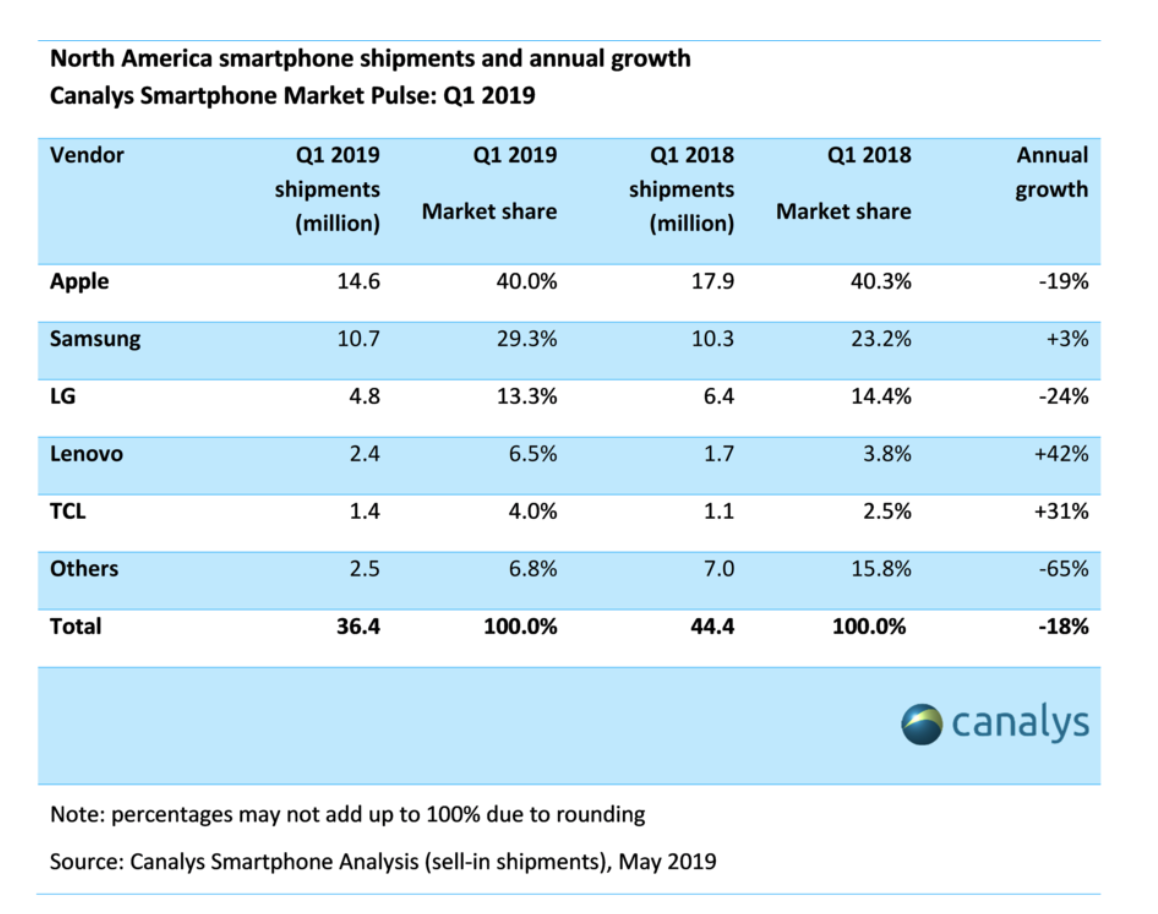 Analyst company Canalys is out today with a new report looking at the smartphone market in North America during the first quarter of 2019. According to Canalys, smartphone shipments fell 18 percent year-over-year during the quarter, hitting a five-year low of 36.4 million units.

The data from Canalys suggests that Apple shipped 14.6 million iPhones in North America during the quarter, down 19 percent year-over-year. Of that number, 4.5 million were iPhone XR units, Canalys estimates. For comparison’s sake, Samsung saw a 3 percent increase in shipments year-over-year, while LG was down by 24 percent.

Despite the year-over-year decline for Apple, it was still able to secure 40 percent marketshare in North America. Samsung secure 29.3 percent, while LG came in at 14.4 percent.

Canalys explains that entering March, Apple experienced an uptick in iPhone XR sales due to its growing trade-in push. Furthermore, the firm says that carrier and retail discounts on older iPhones such as the iPhone 6s and iPhone 7 also helped sales:

“Apple shipped 14.6 million iPhones in Q1 2019, down 19%, but maintained a 40% share of the North American market. It was helped by carrier and retail discounts on older models such as the iPhone 6s and iPhone 7, as well as the growing use of trade-din promotions, but this was not enough to offset the shortfall of iPhone shipments in Q1.”

“Apple’s fall in Q1 followed particularly high shipments of flagship iPhones in the previous quarter, but there was a disconnect between channel orders and consumer demand, which then caused early shipments in Q1 to be challenging for Apple. Moving into March, we did see an uptick in iPhone XR shipments, an early sign that these challenges may be starting to ease at home. Apple has shown how vital trade-ins have become by moving the mechanism to the front and center of its ordering process, and it now frequently uses the net price in its flagship iPhone marketing.”

You can read the full report from Canalys here.