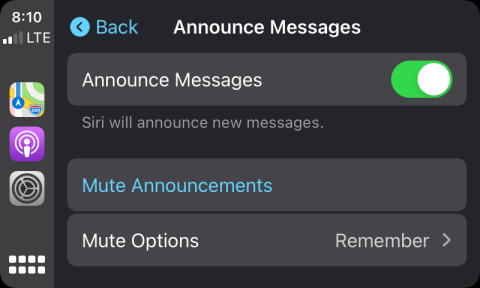 Apple is upgrading the CarPlay experience with an update coming to the iPhone this fall. iOS 15 introduces new features for drivers, including Announce Messages with Siri, Driving Focus for handling notifications, new wallpapers for personalizing appearance, and even more.

Apple has slowly been rolling out a feature called Announce Messages with Siri to more devices recently. Announce Messages first appeared on AirPods, where Siri can read text messages through earphones without looking at your iPhone or iPad.

Starting with iOS 15, CarPlay now works with Announce Messages for the first time.

CarPlay has always been able to read text messages aloud when tapping a notification on your car’s built-in screen. This lets you stay in touch with important messages when driving without taking your eyes off the road to look at your iPhone.

When enabled, Announce Messages will automatically read your new messages aloud as they are received. This behavior is way more convenient when driving because you never have to glance at the screen to see notification badges or banners, and listening to the message is completely hands-free.

Having every message you receive read aloud could be distracting or less than ideal depending on your passengers, of course. Apple designed granular controls for Announce Messages in CarPlay, including a global toggle for muting announcements, when to start or mute announcements, and a toggle to mute announcements from a specific conversation.

Do Not Disturb gets a major upgrade in iOS 15 under an umbrella feature called Focus. This lets you set statuses and modes for how alerts are handled during activities like sleeping, driving, working, and more.

Driving Focus in iOS 15 replaces Do Not Disturb While Driving in CarPlay to fit this new approach. Driving Focus can be enabled manually or automatically when driving is detected, car Bluetooth is connected, or CarPlay is engaged.

What’s new with the upgraded experience is the ability to share your Driving Focus status with others without a pre-written text response when messages are received. For instance, a friend can see that you’re in Driving Focus before sending a message in Messages on iOS 15.

Driving Focus lets you configure specific contacts and apps that are allowed to notify you during this mode. You can also toggle on the ability to receive a new type of alert called Time Sensitive Notifications in iOS 15.

A major perk of this level of granularity for alert control is that you can set different rules for which contacts and apps can alert you for each mode, including work, personal time, sleep, and driving.

Here are the source images, courtesy of Filipe:

iOS 15 is taking Maps to the next level with incredibly detailed city data:

Apple says CarPlay will gain access to this experience in a future update coming later:

CarPlay support coming in a software update later this year.

You don’t have to wait until winter or be in a specific city to notice a new look for Maps, though. iOS 15 has a new map presentation that especially makes dark mode more legible in all environments:

Stay tuned to 9to5Mac throughout the summer as we continue tracking changes in iOS 15 and CarPlay ahead of its release later this fall!