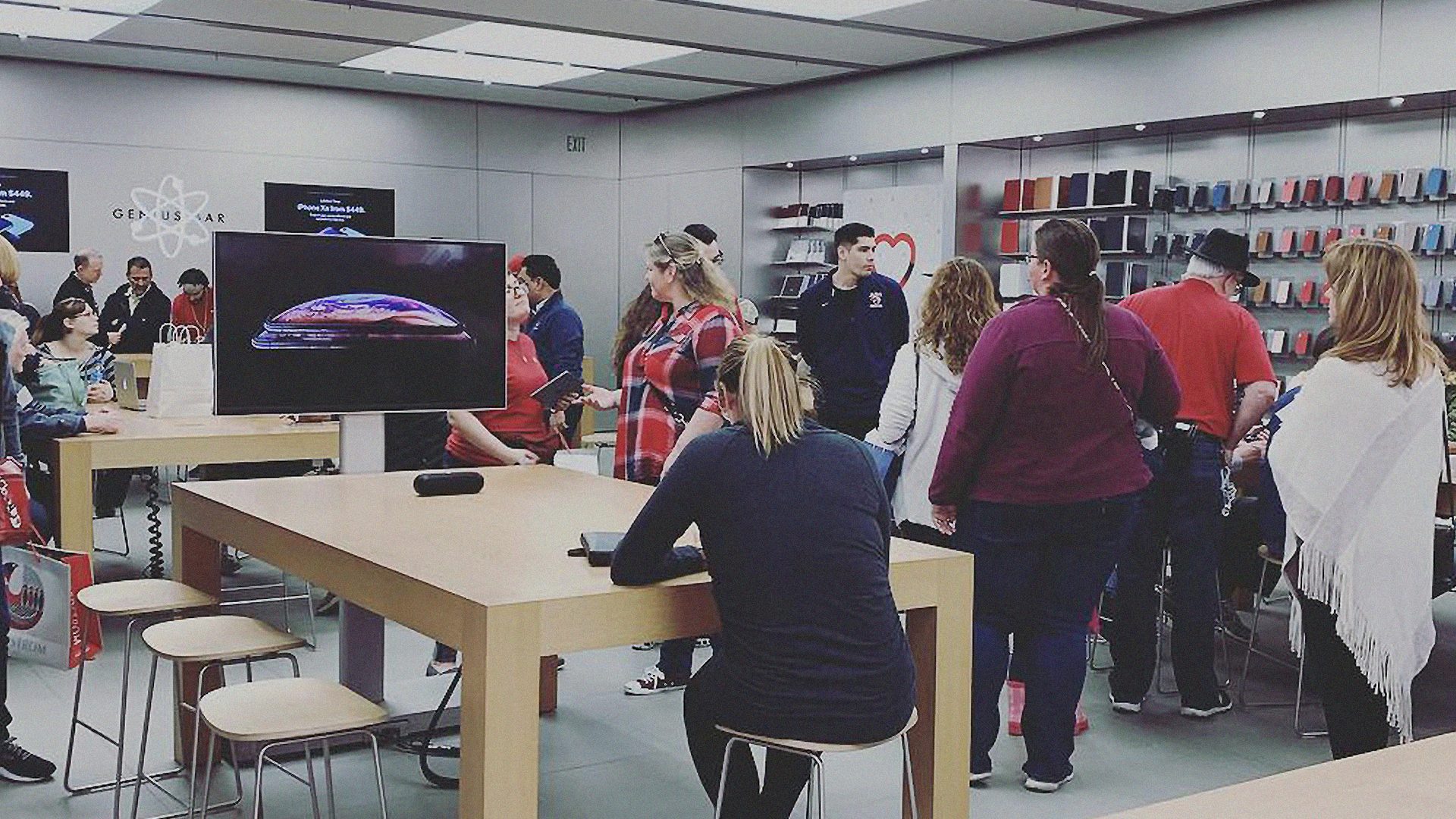 It’s no secret that Apple has been pushing iPhone upgrades like never before over the last several months. Yesterday, however, I visited an Apple store to have my iPhone XS Max serviced, and I realized just have far Apple has taken its iPhone upgrade pitch.

As anyone who visits an Apple store knows, you’re first greeted by a friendly person with an iPad at the store’s entrance. I told the greeter that I had a Genius Bar appointment for my iPhone XS Max, and she asked for a brief description of my problem.

I explained that my device was randomly shutting down and wouldn’t come back on for several hours. As soon as I finished the explanation, the greeter said, “Have you considered upgrading to a new iPhone recently?”

I was holding my iPhone XS Max in my hand, but the Apple store employee clearly must have thought it was an iPhone X. I responded by saying, “There’s an iPhone newer than the iPhone XS Max?” and she quickly laughed and tried to play it off.

A source tells 9to5Mac that this is a new policy at all Apple retail locations. Employees are being instructed to push for an upgrade instead of repairing an existing device. In some stores, the source says, an employee is tasked with pitching iPhone upgrades to Genius Bar customers as they wait for appointments. Other stores have the Geniuses themselves to pitch an upgrade. There are also now demo units on support tables at many stores.

Apple asked retail employees to promote the new iPhones using methods not seen before. Technicians were told to push iPhone upgrades to consumers with out-of-warranty devices. Senior sales staff had to make sure other retail workers were suggesting upgrades, and easels offering generous trade-in deals for the iPhone XR were erected in stores.

Retail store employees “selling” a product is nothing new. However, Apple stores in general have been free of such pushes. Employees are friendly but not overbearing, and you can usually do whatever you want without being harassed. Suggesting an iPhone upgrade instead of a repair is a stark change from this.

If Apple wants to turn its retail stores into selling machines akin to car dealerships, that’s its prerogative. In my opinion, however, there’s a certain line that shouldn’t be crossed.

First and foremost, pitching users of the iPhone X to upgrade comes across as a desperate move. The device is barely over a year old, and many iPhone X users haven’t even had it for more than a year. Trying to get someone who spent $1,000+ on their iPhone less than a year ago to spend another $1,000+ is a bold move.

Further, many people dread the task of going to Apple stores and many have to drive several hours to do so. The last thing those people want is for an employee to immediately up-sell instead of helping them repair their existing phone.

Lastly, at the iPhone XS event last September, Apple’s environmental VP Lisa Jackson took the stage to tout that iPhones are lasting longer than ever, promoting sustainability and preventing unnecessary e-waste. Pushing iPhone users to upgrade instead of repair their existing iPhone goes completely against Jackson’s pitch and makes you question what she said.

The only instance in which pitching an upgrade might be ok is if it’s an out-of-warranty repair where it makes some financial sense to upgrade instead. For instance, I’ve had Geniuses suggest this in the past for Mac repairs. If someone has AppleCare+ or is using a relatively new iPhone, however, they shouldn’t be pitched at all.

Michael Steeber wrote in December that Apple’s in-store iPhone marketing “clouds Apple’s retail message.” Its newfound push for upgrades instead of repairs continues to cloud what once made Apple retail such a pleasant experience.

What do you think? Should Apple pitch iPhone upgrades instead of repairs? Let us know your thoughts down in the comments.

After I explained, she said “have you considered upgrading to a new iPhone recently?”

I guess she thought the phone in my hand was an iPhone X, not an XS.

But since when is it Apple Store policy to pitch an upgrade to someone there to get an existing iPhone repaired?