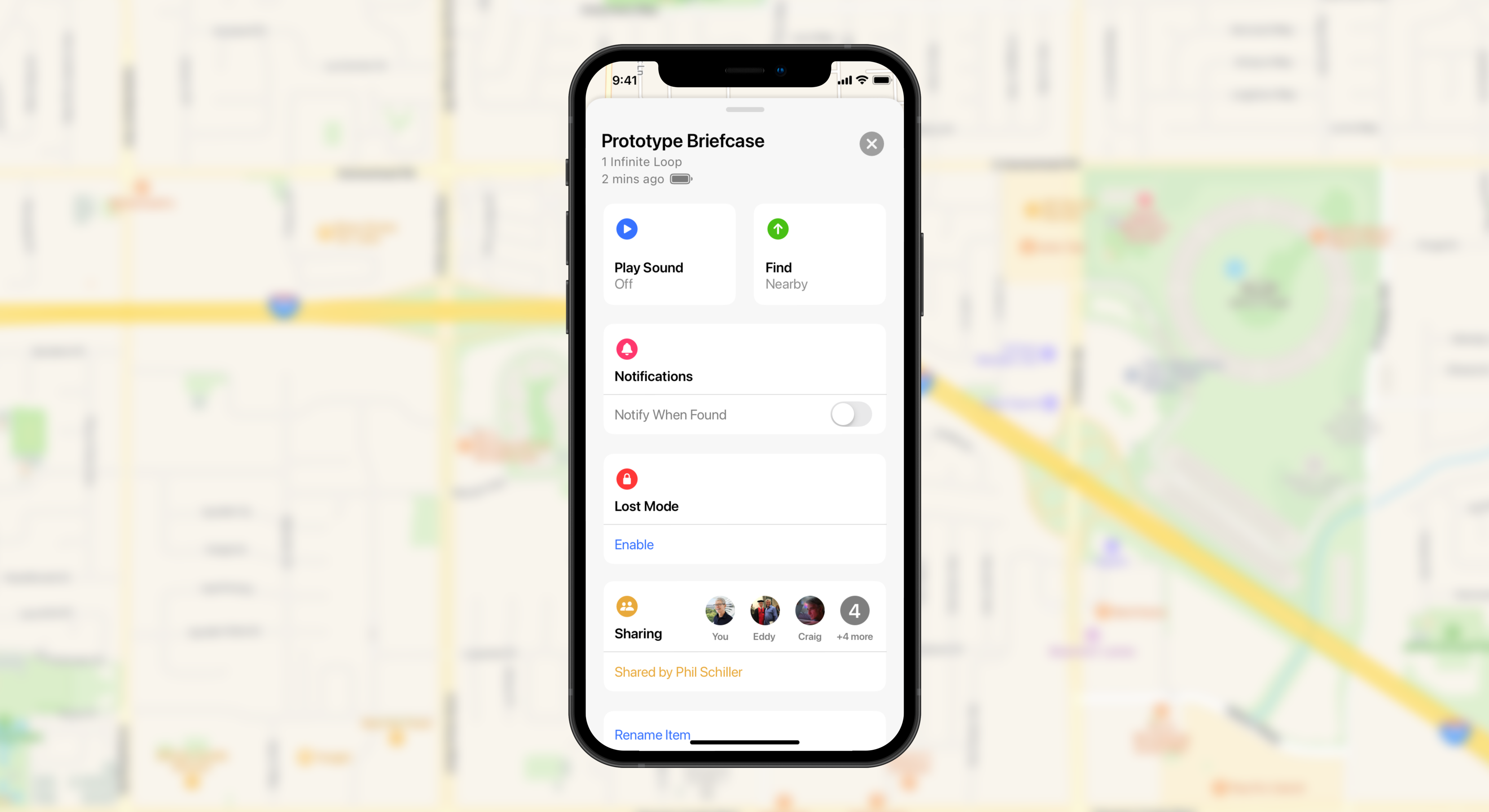 Now that we’ve all spent time with AirTag, it’s time to start thinking about ways to make the product even better. There are several obvious ways to do this that many have noted over the past couple of days. AirTag is an incredibly powerful tool for tracking items, but lots of us would like to allow our friends and family to track important items or ask for their help in finding lost ones. Family sharing is just the tip of the iceberg.

Family sharing is something that would instantly level up AirTag. It would be so useful to be able to share an AirTag’s location with someone else when an item is lost or if an item is important enough that multiple eyes should be kept on it.

In this first example, I imagined what it would look like to share a single AirTag kept in a briefcase with seven people. Aside from sharing items with your family, businesses could get a ton of use out of AirTag this way.

When an AirTag is shared with you, it can be done so temporarily or permanently, much in the same way you can share your iPhone’s location in Find My or Messages. Shared AirTags could show up right in your items list with a clear indicator that they’re either being shared with you or if you are sharing them with other people.

Sharing AirTag is really the biggest thing I’d like to see in the first update to AirTag. If family members can see each other’s devices, why can’t they also see each other’s AirTags? I’d imagine this is something Apple is working on.

A less important but still very useful request I have is for a Find My widget that lets me see my AirTags right from the Home Screen or today view. I can see a different widget for each size class, with the smallest one including additional utility that wouldn’t fit into the larger widgets.

You could use a small widget to see the status of a single item or use the medium-sized widget to see multiple items. Of course, you would be able to choose which four items were shown on the widget, and if you wanted to use multiple medium-sized widgets to show 12 on a single Home Screen, you could. The largest widget could expand on the medium one by adding a map that shows the actual locations of each of the selected items.

While widgets can’t really be interacted with on the Home Screen, they can include buttons that launch into specific parts of its corresponding app. The small widget that displays the status of a single item could have deep links that directly play a sound on the AirTag or start the precision finding process.

I’m absolutely positive there are people out there who will put AirTag on important items that they will always want to know the status of. Widgets are an obvious way to help those customers out.

One thing that seems like an oversight is the lack of Apple Watch compatibility with AirTag. The Find My app on Apple Watch is exclusively for finding people who share their location with you. Instead of cluttering that app with items, they could add a secondary “Find Items” watch app.

You’d be able to do basic things like see an AirTag’s location on a map, play a sound or start the finding process. Precisions finding should work on Apple Watch now that Series 6 includes a U1 chip, which is required for the new finding process. Like family sharing, this is something I imagine Apple is working on already. Precision finding with Apple Watch would be a killer feature. We’ve actually already seen designers mock up what it would look like on the watch.

Did you pick up any AirTags? Are there any changes you’d like to see Apple make? Let us know in the comments below!