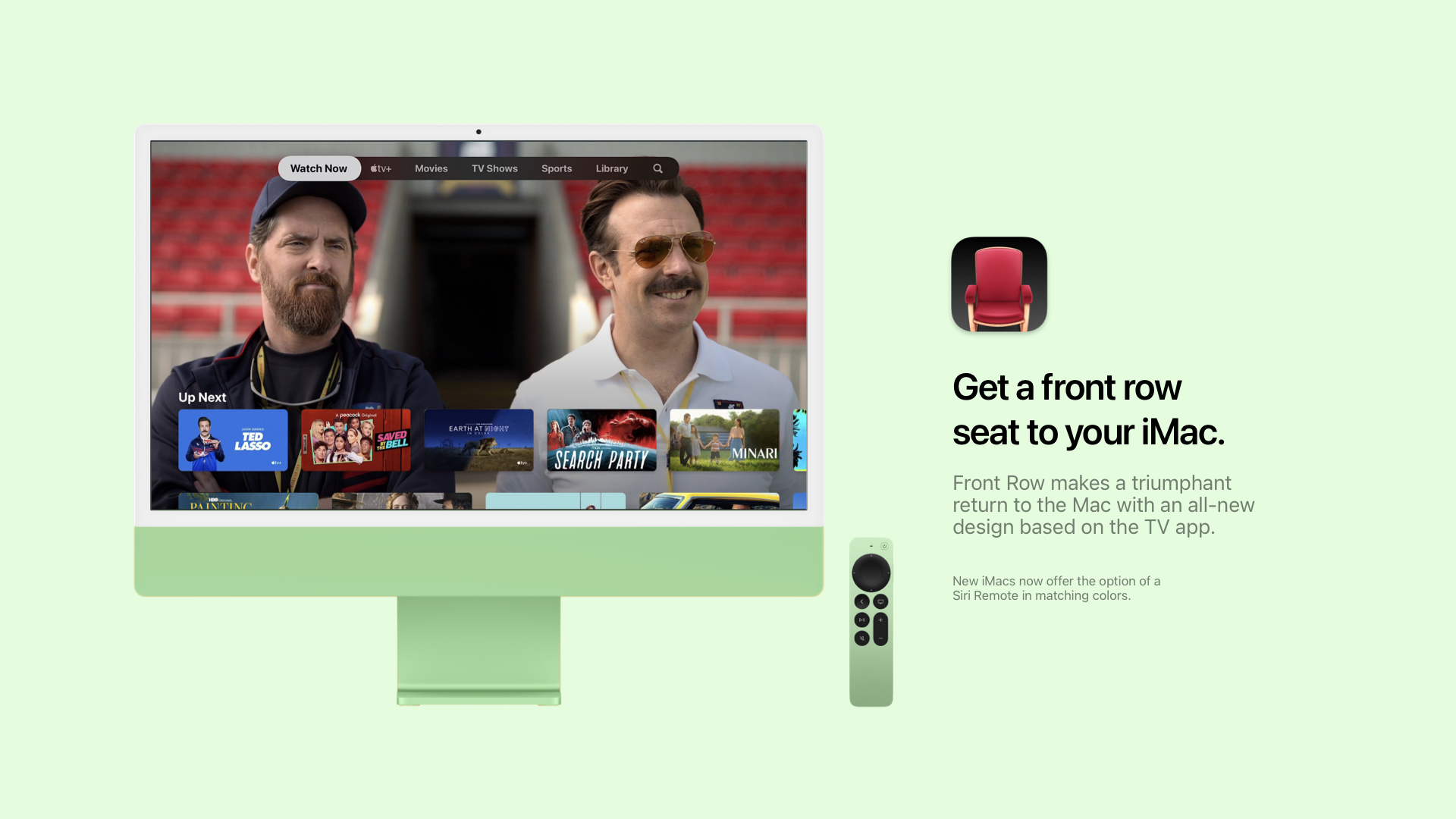 In the first part of our macOS Mammoth concept, we shared a look at ideas for improving the system and redesigning core elements of the desktop. Now, we want to share some ideas for new apps that we’d love to see Apple add in the next version of macOS. There were plenty of different things that we tried out during the design phase, but ultimately we landed on four distinct apps. Let’s take a look.

First off, something fun. Front Row was an app included in macOS starting in Mac OS X Leopard. It had been available on select models with Tiger, but didn’t make it onto every system until Apple shipped Leopard. Front Row was supposed to turn your Mac into an entertainment hub. It pulled content from iTunes and iPhoto and displayed them in a user interface reminiscent of the Apple TV.

Front Row was short-lived, though, and sadly saw its demise with the release of OS X Lion in 2011. A year earlier, Apple started to really put its weight behind the Apple TV, which had an entirely different user interface compared to the final version of Front Row. They wanted people to buy a $99 second-generation Apple TV instead of turning their existing Mac into an old-school Apple TV. But now, a decade later, it feels like it’s time for Apple to revive Front Row.

Front Row based on tvOS

Today we have Apple TVs that run a variant of macOS/iOS called tvOS. Naturally, apps made for tvOS should be able to run on Apple silicon Macs much in the same way you can now run iOS apps. Obviously, Apple wouldn’t want to bring the entirety of tvOS to Front Row, but they could strip the TV app out and add it to the Mac.

The Apple Clips app has become a wonderful little tool for making videos with special effects on the iPhone and iPad. We think Clips would make a great addition to the Mac to help introduce amateur video editing to new younger users of macOS. It has a simpler user interface, easily recognizable fun effects, and it works with iMessage sticker packs.

Clips could also give Memoji and Animoji a new home on the Mac. While no Macs have a TrueDepth module or LiDAR, the new camera on the iMac is absolutely fantastic, and I’d imagine some software tricks could be done to make this work reasonably well. But this is forward thinking, and by the time we get macOS 13, it’s very possible we’ll have Face ID Macs.

Give Weather a new platform

The new Weather app in iOS 15 is absolutely fantastic. It’s a perfect natural evolution of the previous design introduced in iOS 7 with all-new animations, refined controls, and plenty of new features. We’d love to see those new animations on larger displays like the expansive iMac screen. Weather fanatics could see multiple locations at once by opening them in multiple windows.

Opening a location full screen could show stunning animations. Apple could even add a new screensaver to macOS that shows weather animations for your current location in real time while your Mac is asleep. I’d like to point out that the new Weather app icon introduced yesterday in iOS 15 beta 5 has more depth and vitality than other stock iOS app icons. It would fit right in on the Mac.

Apple’s admitted it themselves, the Mac isn’t safe from viruses and vulnerabilities. It’s just the nature of the world we live in now. Macs are everywhere, and they are very much a target on a scale that they weren’t before the iPhone. Enter the Maintenance app. You might be familiar with apps like Clean My Mac that help you remove junk from your Mac, as well as apps like Malware Bytes that help you find out if your Mac is infected with malware. They’re both excellent tools that I highly recommend, but I’d still like for Apple to make their own first-party solution.

The Maintenance app would offer three core features. The first would be “Deep Clean.” Apple would search your Mac for duplicate files, really old files that it knows were backed up, old installers, and more so that it could save space on your drive. “Safety Check” could download a database of known malware and search your Mac for any matching files. If it finds something dangerous, it could remove it or automatically help schedule a Genius Bar appointment. Lastly, “Tune Up” could run scripts that free up RAM and end unnecessary system processes. You can also see that there could be widgets to keep you updated as well as links to download the Apple Support app.

I am sure some of you will sound off in the comments, but hear me out. I think that the next version of macOS could end up dropping support for a bunch of Macs as Apple continues to innovate on their own custom silicon. I made up the list below, but I think it does a good job of summing up what I am thinking.

I’d expect Apple to only support Retina Macs at some point and even limit it to machines made over the past five to six years with modern specs and designs. In this particular concept, lots of the interface elements would use animations and need to be zippy. To ensure that it runs consistently and smoothly, I think it would behoove them to step up the system requirements a bit.

macOS Mammoth or macOS 13 is far away. Heck, macOS 12 hasn’t even been released to the public yet. But we’re sharing these ideas early in the hopes that they may be considered by the team at Apple. Concepts are kind of useless if they’re dropped right before a new OS releases. There’s simply no time for development teams to even remotely consider ideas, in that case.

So that’s macOS Mammoth and our ideas for redefining the Mac experience with a redesigned desktop and a handful of new apps. If you missed part 1, make sure to check it out. Let us know what you think about our ideas in the comments below and what you might want to see next year.