At its “#SeizeTheMoment” event in New York City today, drone maker DJI announced its newest device, called the DJI Spark. The company said that the new drone is its “smallest, smartest, and simplest” drone to date, and was built to capture moments on the go that bulkier drones might miss out on.

The drone lifts from the palm of the user’s hands and can be controlled through hand gestures, without the need of a smartphone. Following an initial launch, Spark enters Gesture Mode which lets users move the drone in any direction by guiding it with their hand, while waving will push it back ten feet, and creating a square with your fingers will capture a photo. To call it back, users just have to wave their arms over their head, then place their palm out so it can rest. 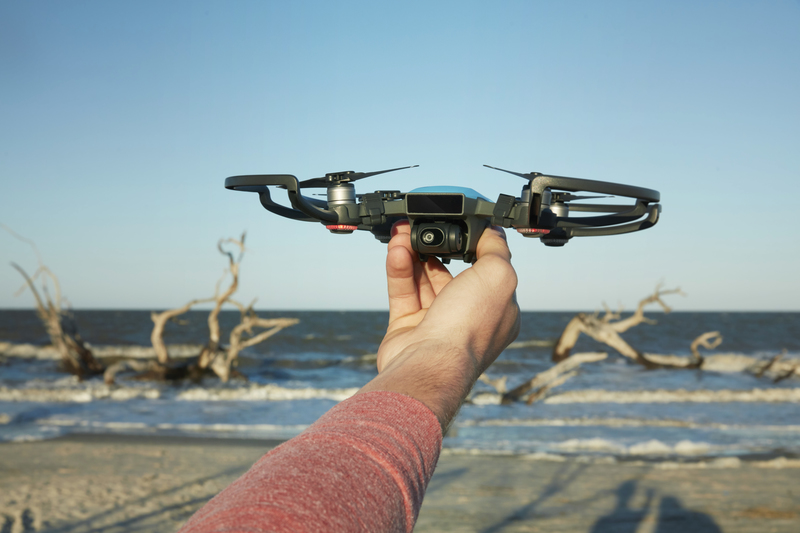 The company designed the drone to be light, weighing about 10.6 ounces, so it can be carried around easily on a daily basis, with a total flight time of 16 minutes. Interchangeable batteries and a micro-USB port allow easy recharging in the field, as well. Additionally, the company aimed to make Spark more personalized than its previous products, with color options coming in Alpine White, Sky Blue, Meadow Green, Lava Red, and Sunrise Yellow.

“Controlling a camera drone with hand movements alone is a major step towards making aerial technology an intuitive part of everyone’s daily life, from work and adventure to moments with friends and family,” said Paul Pan, Senior Product Manager at DJI. “Spark’s revolutionary new interface lets you effortlessly extend your point of view to the air, making it easier than ever to capture and share the world from new perspectives.”

When users want to get a little more control, Spark can connect to an iPhone app and be flown as far as 109 yards away from the user. An optional remote control accessory allows the drone to be flown as far as 1.24 miles away. In the app, users can enable the QuickShot Intelligent Flight feature, which follows a subject for around one minute and then automatically edits the footage down to ten seconds so it can be easily shared on social media.

Spark houses a camera with a 1/2.3″ CMOS sensor that captures 12 megapixel photos and records stabilized 1080p videos at 30fps. Some technology found in previous DJI drones has also been added in Spark, including intelligent flight modes like TapFly and ActiveTrack. The company has also introduced entirely new shooting modes, including a horizontal and vertical panoramic mode, and a depth of field “ShallowFocus” mode.

To ensure flight safety, Spark has dual GPS and GLONASS sensors, a 3D sensing system to detect obstacles up to 16 feet away, and a vision positioning system with a range of up to 98 feet. With a sufficient GPS signal, Spark will return to the point that it launched if its battery begins running low or if the pilot taps the Return to Home button. Integration with the company’s geofencing warning system also gives pilots a heads up when a potential flight area might be an anti-drone zone.

DJI is opening up pre-orders for Spark today at $499, which includes the drone, a battery, a USB charger, and three pairs of propellers. The company is also selling a Spark Fly More Combo, which includes a drone, two batteries, four pairs of propellers, a remote controller, propeller guards, a charging hub, a shoulder bag, and all necessary cables, for $699. The drone is expected to begin shipping in June.