A new report by The Wall Street Journal this week has taken a look into entrepreneurial teenagers and the lucrative business of summertime iPhone repairs. One 16-year-old in Nantucket, Massachusetts interviewed for the article cited a nearly $24,000 income for iPhone repairs made in the summer of 2016, off of fixes he performed for devices like the iPhone 7 Plus at $189.99 per cracked screen.

Shaw has been repairing iPhones since he was 12, and this summer plans to set up his small business at a table outside of a local ice cream parlor. His repairs include fixing broken screens, microphones, and various other parts of both iPhones and iPads. During last summer’s busy season, Shaw said he was repairing as many as nine iPhones every day. 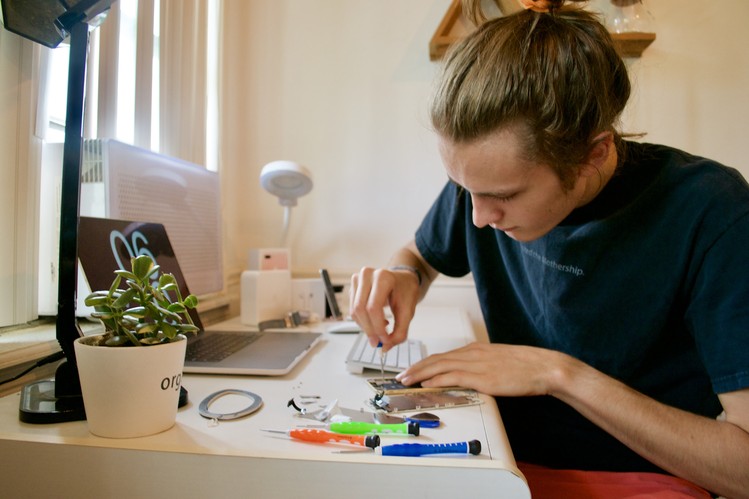 Image of Joseph Kokenge taken by Sarah Desforges via WSJ

On Nantucket, Mr. Shaw is the “go-to guy,” says Peter Bordes, executive chairman of a software company, oneQube, who got his phone fixed by Mr. Shaw last summer after a tip from a friend’s teenage daughter.

“She said go to this place, and you’ll find him in this store,” Mr. Bordes says. “It’s like a mafia; they know who to go to.” The repair, he says, was “flawless.”

In Lafayette, Louisiana 18-year-old Joseph Kokenge quit his job at a local bowling alley, which his father manages, after discovering how much money he could make fixing broken iPhones. He began learning how to repair Apple’s smartphones watching his father repair a cracked iPhone 3GS, and then browsed YouTube how-to videos for more information.

On average, Kokenge has charged $50 to fix the screens of iPhone 5 devices, and $200 for an iPhone 7 Plus, and he works on his repairs at a local coffee shop.

When a friend asked if his father could fix an iPhone 5, the teen watched YouTube how-to videos and repaired it himself. He soon earned a reputation at school, he says: “If a phone was broken, they knew to go to me.”

Word spread and parents, too, approached him. By senior year, he had quit his job at the bowling alley his father manages. “I told him that my time was worth more than $7.50 an hour,” he says. “He was proud that I was making more money on my own.”

Although AppleCare+ significantly reduces the cost of repairs, out-of-warranty repairs for screen damage made directly from Apple currently cost between $129 (iPhone 5 family) and $149 (iPhone 7 Plus). If any other damage is made to the device, the price jumps to between $269 and $349 for the same devices.