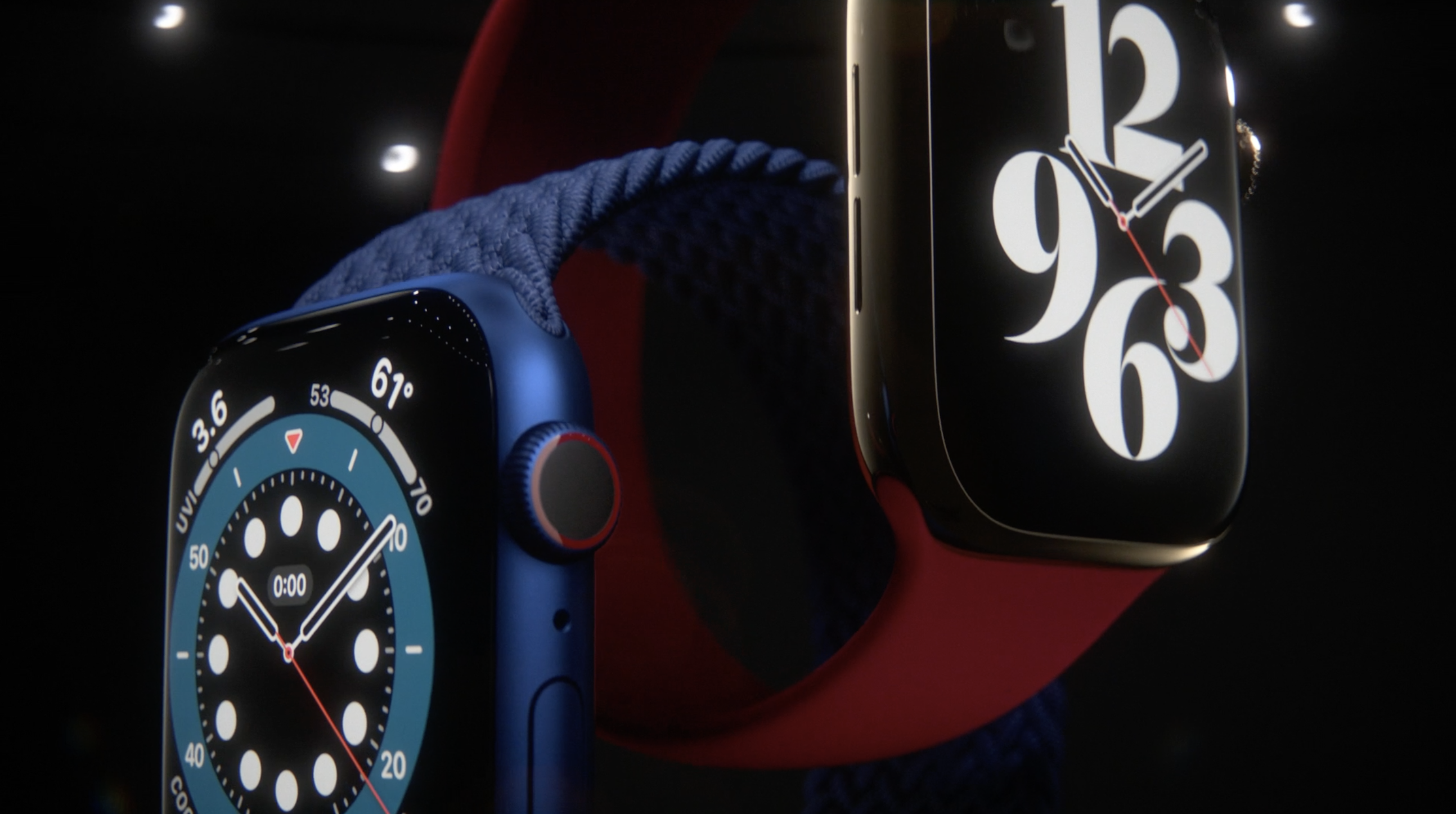 In just over 60 minutes, Apple today announced two new Apple Watch models, two new iPads, and the details on its latest software and services releases. Read on for a full recap of everything Apple announced at its September event today.

Apple explains that Oxygen saturation represents the percentage of oxygen being carried by red blood cells from the lungs to the rest of the body and indicates how well this oxygenated blood is being delivered throughout the body. Through the Blood Oxygen app, you can get a reading in just 15 seconds with the Apple Watch Series 6.

In terms of performance, the Apple Watch Series 6 is powered by Apple’s newest S6 processor, which is up to 20% faster than the Series 5. Apple says that the Apple Watch Series 6 features the same 18-hour battery life as before. It also includes the U1 chip and Ultra Wideband antennas for features such as CarKeys. And while battery life is the same, Apple says that the Series 6 charges 20% faster than the Series 5 and that workout tracking is less intensive for things like indoor and outdoor runs.

The new Apple Watch Series 6 is available to order today starting at $399. The first orders will arrive as early as Friday, but some models are already delayed until October and November.

Next up is the new Apple Watch SE. This serves as a lower-cost option for Apple Watch buyers, coming in at $279.

The Apple Watch SE features the same physical design as the Series 4, Series 5, and Series 6. It’s powered by Apple’s S5 processor, which Apple says is up to two times faster than Apple Watch Series 3.

The Apple Watch SE does not feature an always-on display, nor does it support ECG or blood oxygen features, but there is support for fall detection and Emergency SOS. Other features include an always-on altimeter, a built-in compass, the latest speaker and microphone, which are optimized for better sound quality for phone calls, Siri, and Walkie-Talkie,1 along with Bluetooth 5.0.

Users can watch fitness classes hosted by Apple, with health workout metrics shown over the top of the video, synced from Apple Watch. The data can then be automatically saved to the Health app.

In terms of programming, Apple Fitness+ will include workouts for cycling, treadmills, HIIT, rowing, strength, yoga, dance, core, and cool downs. Each class will be set to music that you can easily locate through Apple Music on your device. Apple says new workouts will be released on a weekly basis.

Apple Fitness+ classes can be viewed on iPhone through the Fitness app or through an all-new fitness app on iPad and Apple TV. Fitness+ will debut before the end of the year. Apple will include three months free of Apple Fitness+ with new Apple Watch purchases.

Alongside the introduction of Apple Fitness+, Apple also introduced its long-awaited bundle of Services, branded as Apple One.

Apple One starts at $15 per month for Apple Music, Apple TV+, Apple Arcade, and 50 GB of iCloud storage for individuals. The Family version of the plan will run $20 per month with 200GB of storage.

For $30 per month, you can upgrade to the Premiere Apple One bundle, which includes Apple Music, Apple TV+, Apple Arcade, 2TB of iCloud storage, Apple News+, and Apple Fitness+.

Based on what Apple announced today, Apple One seems like a solid value for the money. Apple says individuals can save $6 per month, whereas families save $8 a month. Moreover, the Premier plan is $25 cheaper than buying all of Apple’s services individually.

We’ll have more details on Apple One over the coming weeks, with Apple saying the bundle will be available sometime this fall.

Read more about Apple One:

Finally, Apple concluded today’s event with a pair of announcements for the iPad lineup. First off, Apple detailed an all-new $329 iPad powered by the A12 Bionic processor, which is an upgrade from the previous generation’s A10 processor.

Much everything else about the new 8th generation iPad is the same, including Apple Pencil support, Smart Keyboard Support, a 10.2-inch Retina display, and Smart Connector support.

The 8th-generation iPad keeps the same price as the 7th-gen: that’s $329 for general sale and $299 for education. It’s available to order from today, with the first shipments arriving on Friday.

The next announcement for the iPad today was an all-new iPad Air. As rumors had indicated, the new iPad Air is a massive update compared to its predecessor. Leading the way here is a complete redesign that heavily resembles the iPad Pro.

The new iPad Air features a 10.9-inch Liquid Retina display with P3 wide color, True Tone, and a laminate coating. Touch ID is located in the power button, so instead of Face ID, the biometric authentication is built directly into the power button — this marks the first time Apple has expanded Touch ID outside of the Home button.

The 10.9-inch display of the iPad Air features a resolution of 2360×1640 with full lamination. In terms of performance, the device is powered by Apple’s newest A14 Bionic processor — making the iPad Air the first Apple product t

Read more about the new iPad and iPad Air:

Finally, concluded today’s event with an incredibly surprising announcement for the future of its software platforms. Apple revealed that iOS 14, iPadOS 14, watchOS 7, and tvOS 14 will all be released to everyone tomorrow, September 16. This was a surprising announcement, with many people having assumed Apple would give developers at least a week’s notice.

Read more about the software announcements:

What was your favorite announcement during Apple’s event today? Did your order a new Apple Watch? Do you plan on ordering a new iPad? Let us know down in the comments.