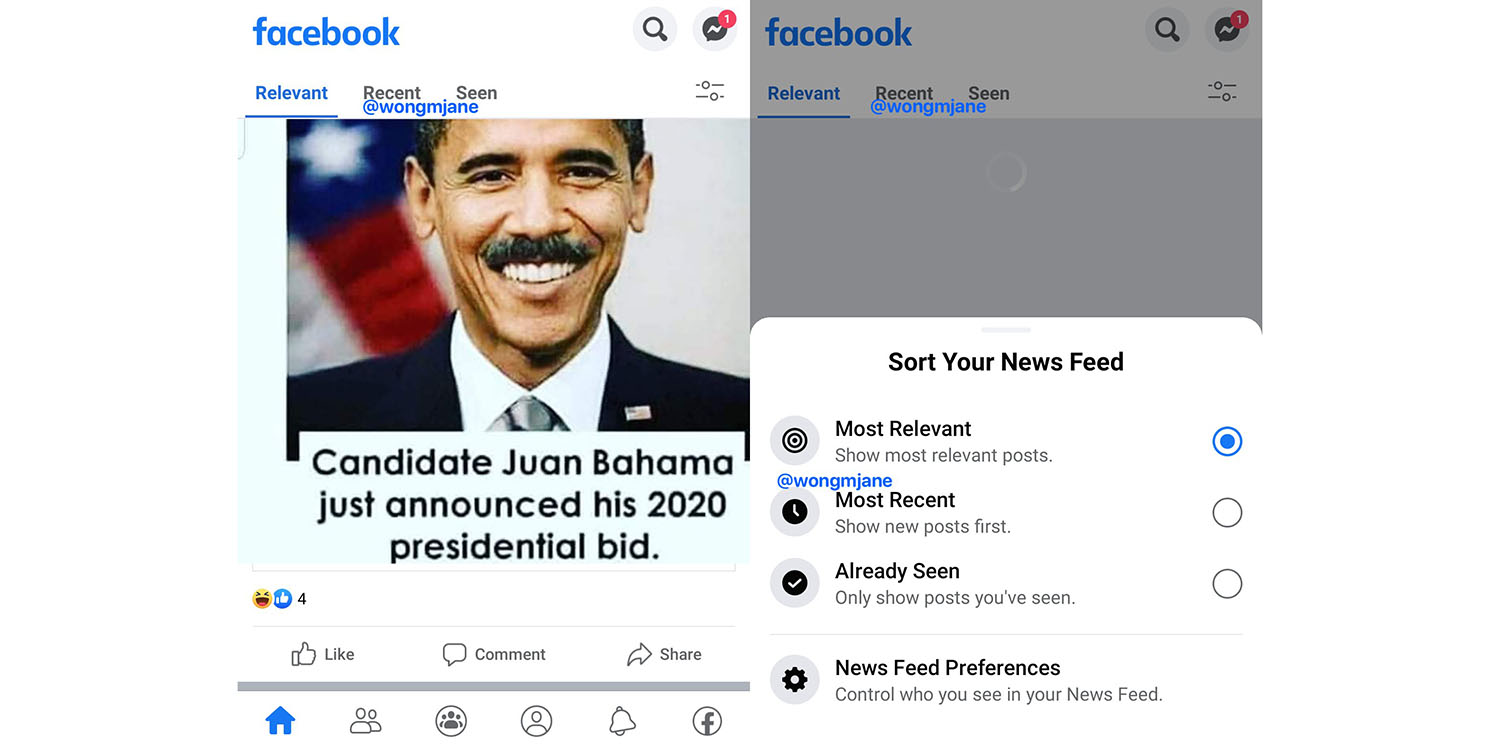 Getting a true Facebook sequential feed has been variously easy or difficult ever since the company first introduced algorithmic sequencing. But an internal prototype shows the company is at least thinking about how to make it much easier…

Facebook long since moved from a strictly sequential feed — where we saw the most recent post first, and the rest in reverse time order — to various algorithmically determined ones. The current version is known as “Most Relevant.”

Facebook uses a variety of markers to determine which posts may be of greatest interest to us, including our Liking and commenting on posts. Interacting with a post is interpreted as greater interest in posts by that person.

The company hasn’t always made it easy to switch to a sequential feed, but a prototype app spotted by reverse engineering guru Jane Manchun Wong offers a simple tabbed interface. This would also allow you to see a feed of posts you’ve already viewed.

Facebook is working on tabbed newsfeed for easier access to “Most Recent” and “Already Seen” feeds pic.twitter.com/8Z9KLG9nc8

The company confirmed the test to TechCrunch.

When asked by TechCrunch, a Facebook spokesperson confirmed this is something it’s considering testing externally, but it’s just internally available for now. It’s exploring whether the tabbed interface would make Most Recent and Seen easier to access. “You can already view your Facebook News Feed chronologically. We’re testing ways to make it easier to find, as well as sort by posts you’ve already seen,” the spokesperson tells TechCrunch, and the company also tweeted.

Offering quicker ways to sort the feed could keep users scrolling longer. If they encounter a few boring posts chosen by the algorithm, want to see what friends are doing right now or want to enjoy posts they already interacted with, a tabbed interface would give them an instant alternative beyond closing the app. While likely not the motive for this experiment, increasing time spent across these feeds could boost Facebook’s ad views at a time when it has been hammered by Wall Street for slowing profit growth.

To many, Facebook’s algorithm can feel like an inscrutable black box that decides their content destiny. Feed it the wrong signals with pity Likes or guilty-pleasure video views and it can get confused about what you want. Facebook may finally deem us mature enough to have readily available controls over what we see.