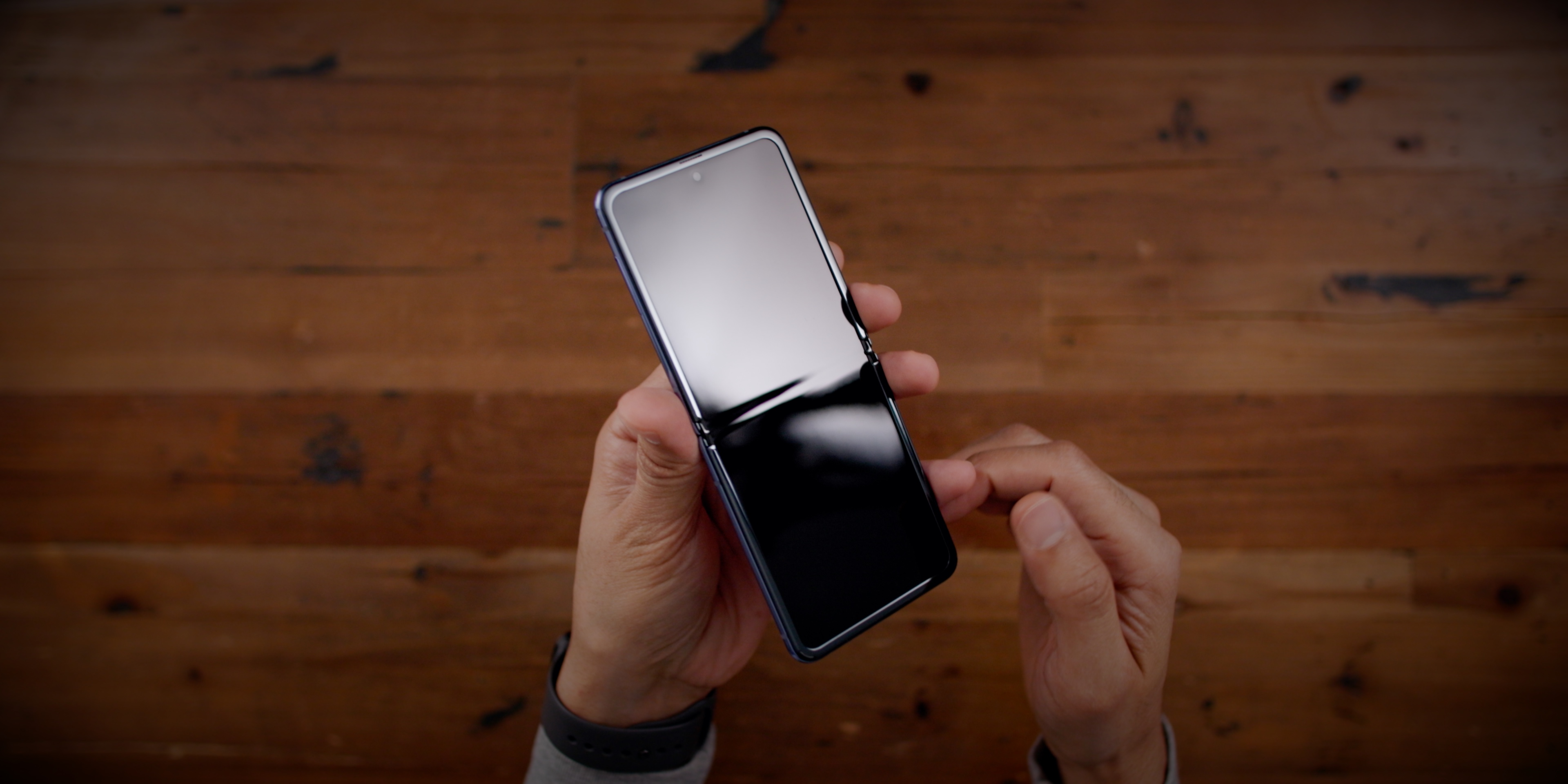 Over the weekend I got my hands on Samsung’s Galaxy Z Flip smartphone. It doesn’t possess the type of flagship specs found on the recently revealed Samsung Galaxy S20 Ultra, but to me, it’s by far the more interesting phone, thanks to its ability to fold a 6.7-inch AMOLED display into a clamshell form factor that’s much more portable.

The Samsung Galaxy Z Flip is not the first foldable smartphone, but it’s easily the most impressive foldable phone that the industry has seen thus far. While far from perfect, it makes me think that there is definitely a market for such a product, and I think it goes without saying that Apple has been experimenting with similar form factors behind closed doors.

Although we may or may not ever see an Apple “iPhone Flip,” I’m really hoping that we will. The Samsung Galaxy Z Flip breathes some much-needed excitement into the typical stale smartphone “slab of glass and metal” form factor.

First and foremost, I want to acknowledge that I’m far from a Samsung fan. Their software, while improved a lot over the TouchWiz days, still doesn’t do it for me. I’ve used plenty of Android phones over the years, and tend to use a flagship Android as a secondary phone from time to time, but there is nothing like the polish and confidence that I get from first-party Apple software and apps.

Samsung is known for throwing a bunch of software gimmicks in their phones just to add another bullet point to their marketing materials, and I’ve never been a fan of that strategy. This is me acknowledging that Samsung makes a lot of substandard things, especially in the area of software.

But this, my friends, broadly speaking, is not one of those things, at least from a conceptual standpoint. There is something to the hardware form factor of the Samsung Galaxy Z Flip. What makes it so interesting is that it’s a device with a 6.7-inch display  — a screen that’s diagonally larger than the iPhone 11 Pro Max — that folds down to a pocketable 2.9 x 3.4-inch form factor that’s 0.68 inches thick at the hinge.

In a nutshell, the folding function reduces the footprint of the Samsung Galaxy Z Flip in half, making for a much more portable device. In a smartphone industry dominated by unwieldy device sizes, this seems like a logical solution to the problem. Simply unfold the phone when you need to use it, but put it in clamshell mode when not in use. It’s similar to how a laptop gains a much bigger footprint while in use, but reduces in size when ready to travel. 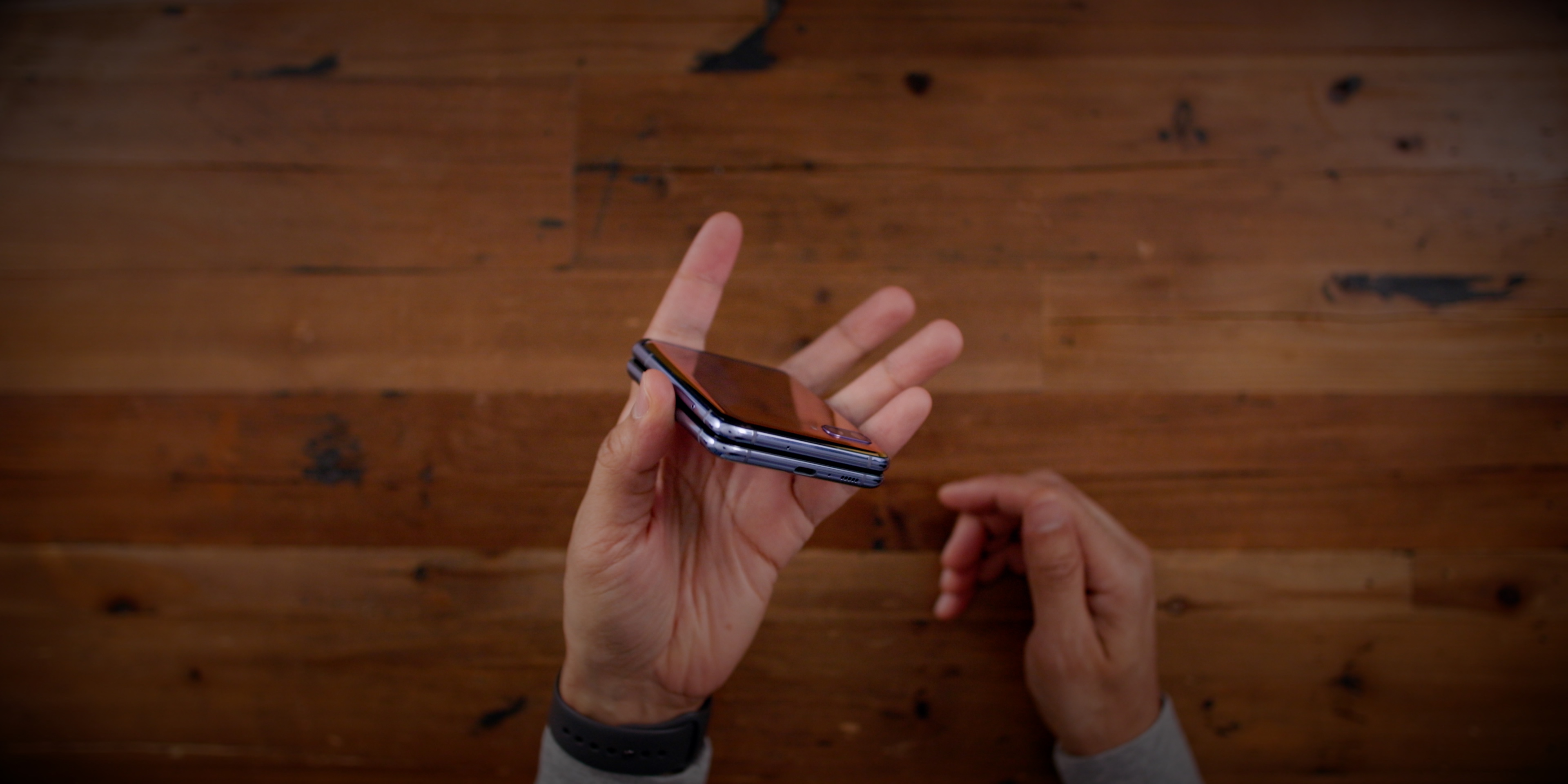 When completely folded into clamshell mode, the Galaxy Z Flip’s small external display is available for viewing the current time, notifications, and even for taking selfies.

A double-tap on the screen displays the current time, while a right swipe reveals any pending notifications. Users can tap the notifications to view more details, and a contextual continuity feature lets you transition to relevant apps as you unfold the device. 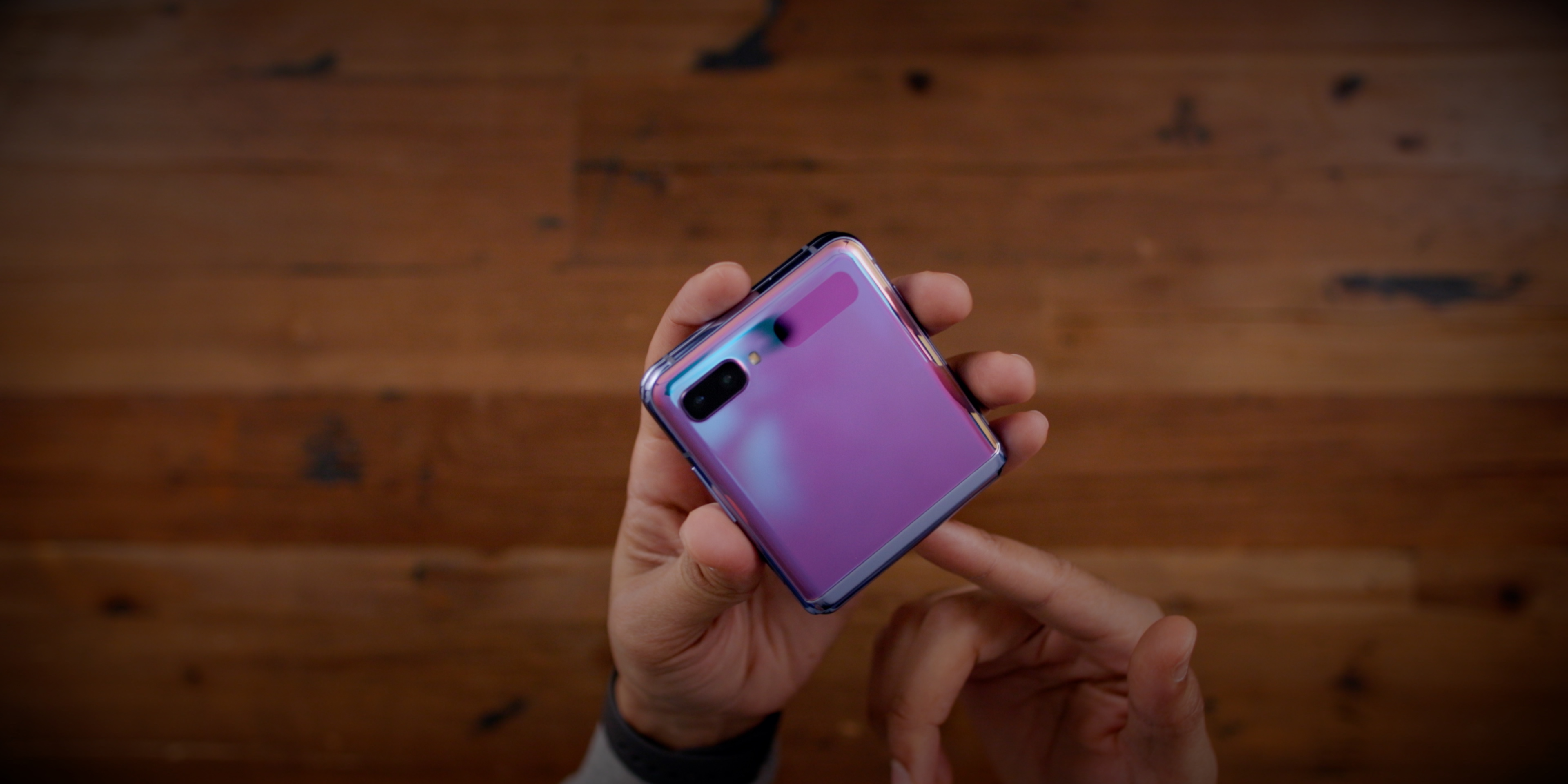 A double-press of the Side key, which also doubles as the device’s fingerprint sensor, will put the phone into selfie mode. This mode displays the current frame from the camera next to the display for taking photos. It’s a bit difficult to frame your shot on such a small display, but I can see it being useful when you’re not in a position to unfold the device. 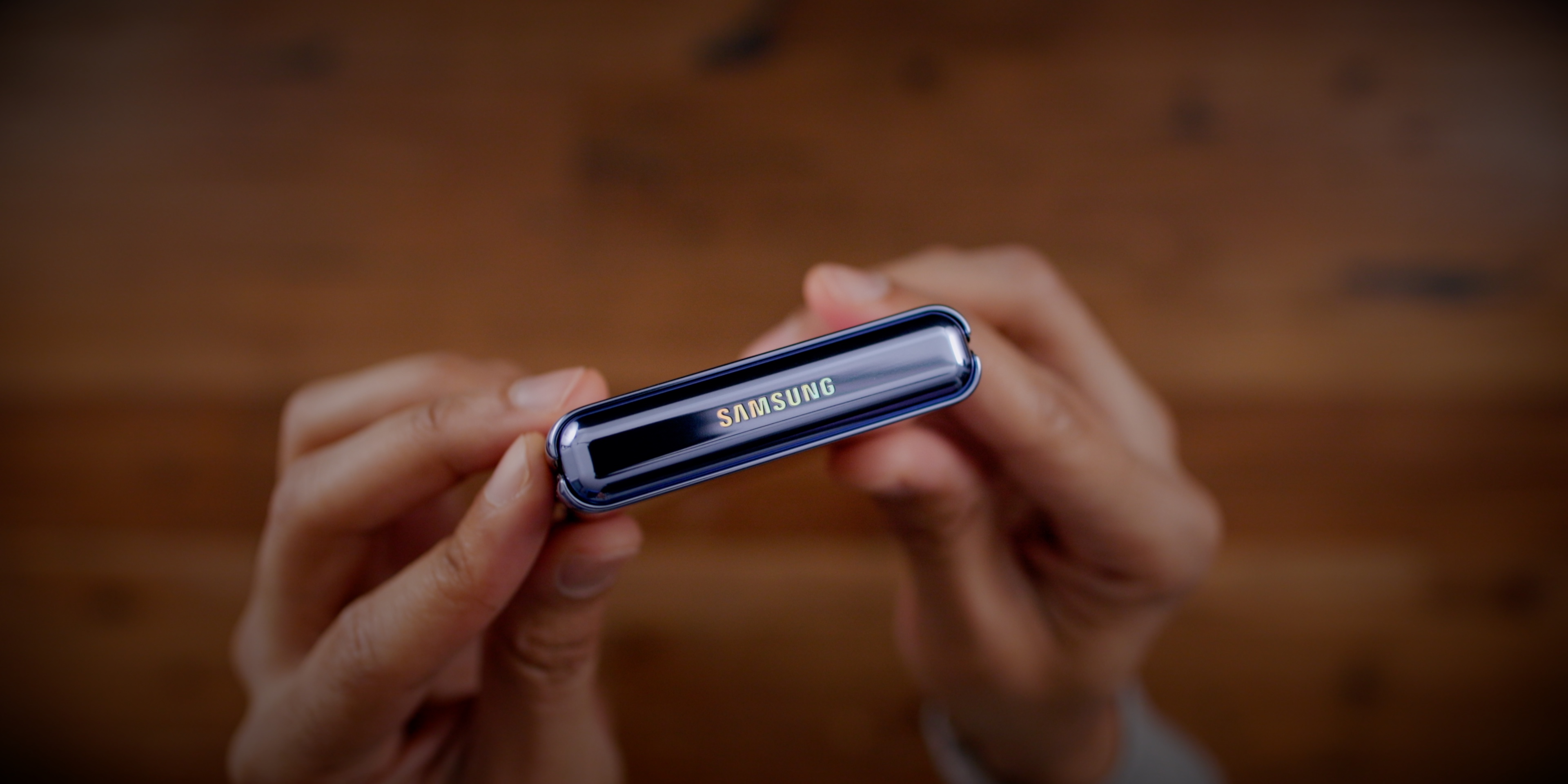 I think Apple could do some innovative things with an iPhone Flip in clamshell mode. Apple is already good at working with small displays, as is evident by the Apple Watch, so it would be interesting to see its take on a small external display that complements a larger primary display.

The Galaxy Z Flip isn’t just about being fully folded for portability or fully unfolded for usability. Users can take advantage of what Samsung is calling Freestop Fold, which leverages the stiff hinge to position the top portion of the screen and various angles.

When positioned this way, the Galaxy Z Flip reminds me of the Nintendo Game Boy Advance SP portable gaming console from back in the day. It allows you, for instance, to split apps like the camera app in half, turning the top half of the device into a viewing area, with the bottom half containing controls. 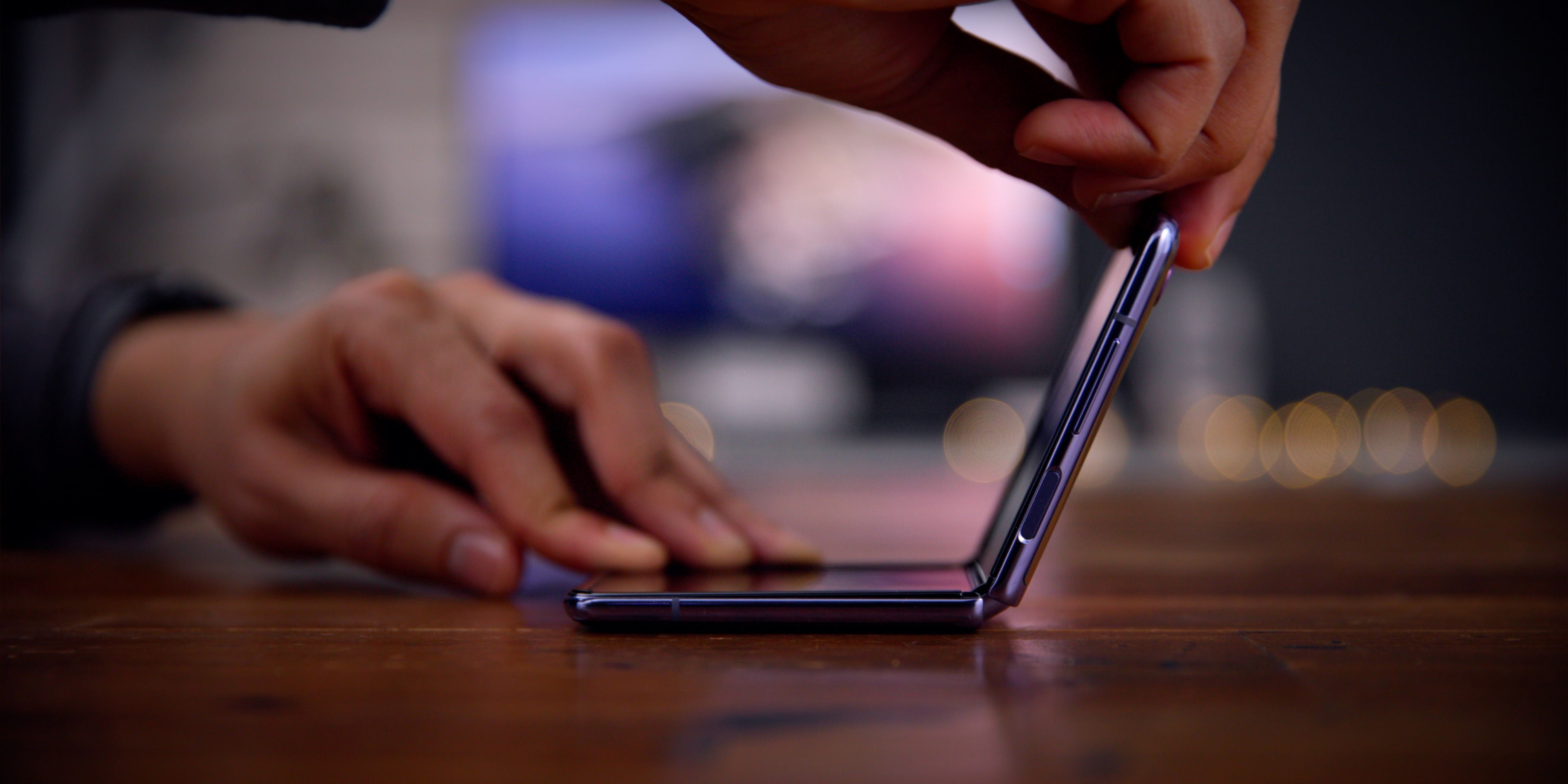 This flexible hinge allows users to capture low angle shots with the camera app, and to view video content at the most convenient angle. It basically works as a built-in stand for the device.

You can also use the Multi Active Window feature to have split screen mode between two apps with one each occupying the top and bottom portions of the screen. I’m still not totally sold on the way that Samsung takes advantage of the folded screen in software, but I think it has potential. 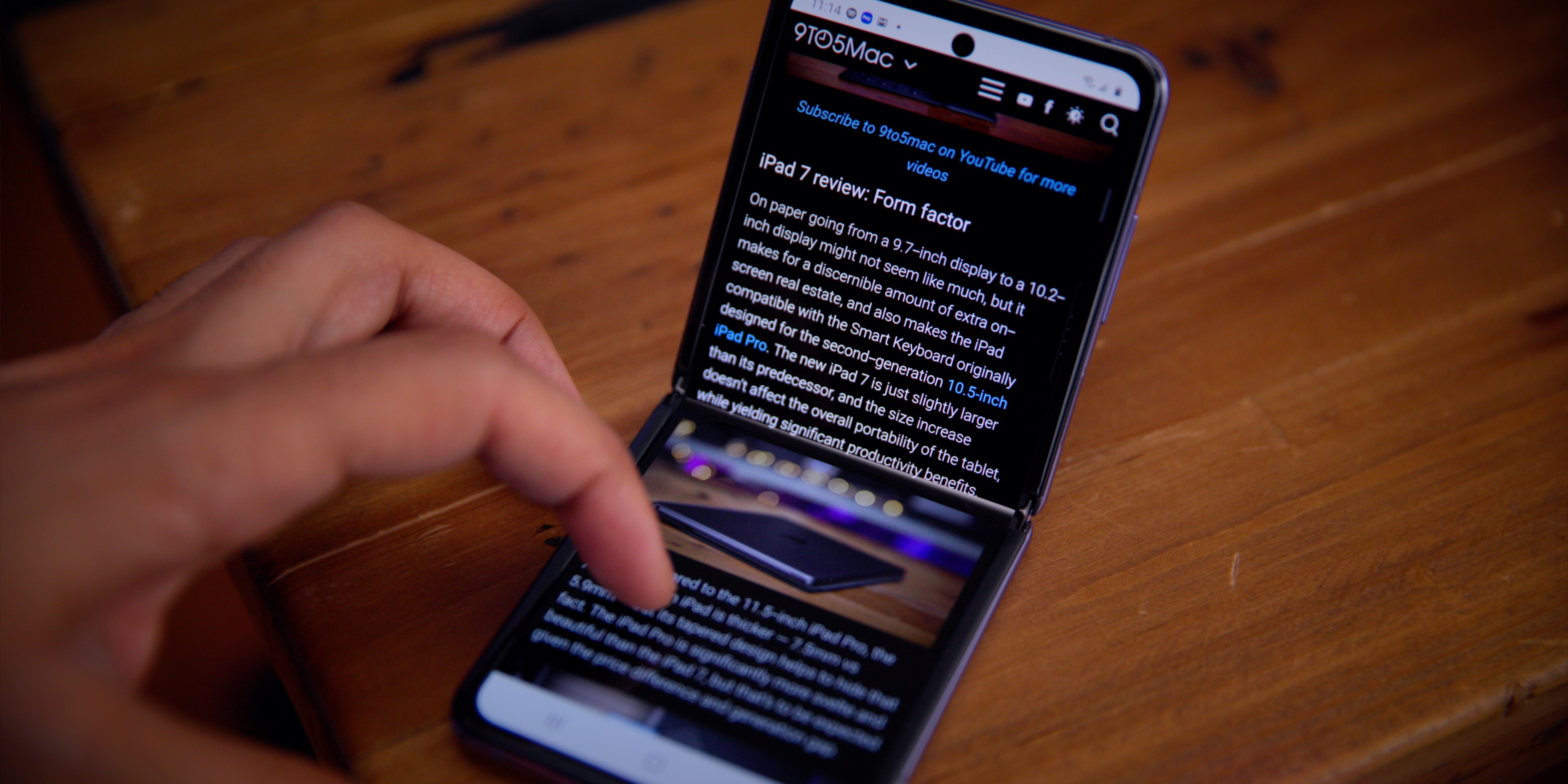 Imagine FaceTime calls at just the right angle without having to hold your phone. Or innovative Apple Arcade games that take advantage of both the top and bottom portion of the screen.

The build quality of the Samsung Galaxy Z Flip is a truly a mixed bag, and it’s the primary reason why I wouldn’t consider using such a device as a daily drivers. The screen, which Samsung says is made out of foldable “glass,” doesn’t feel terrible, but it’s obviously not the sort of rock-solid glass we’re used to having on a standard smartphone. The glass is very soft, and feels more like hard plastic to me. It can be deformed with a fingernail if not careful. 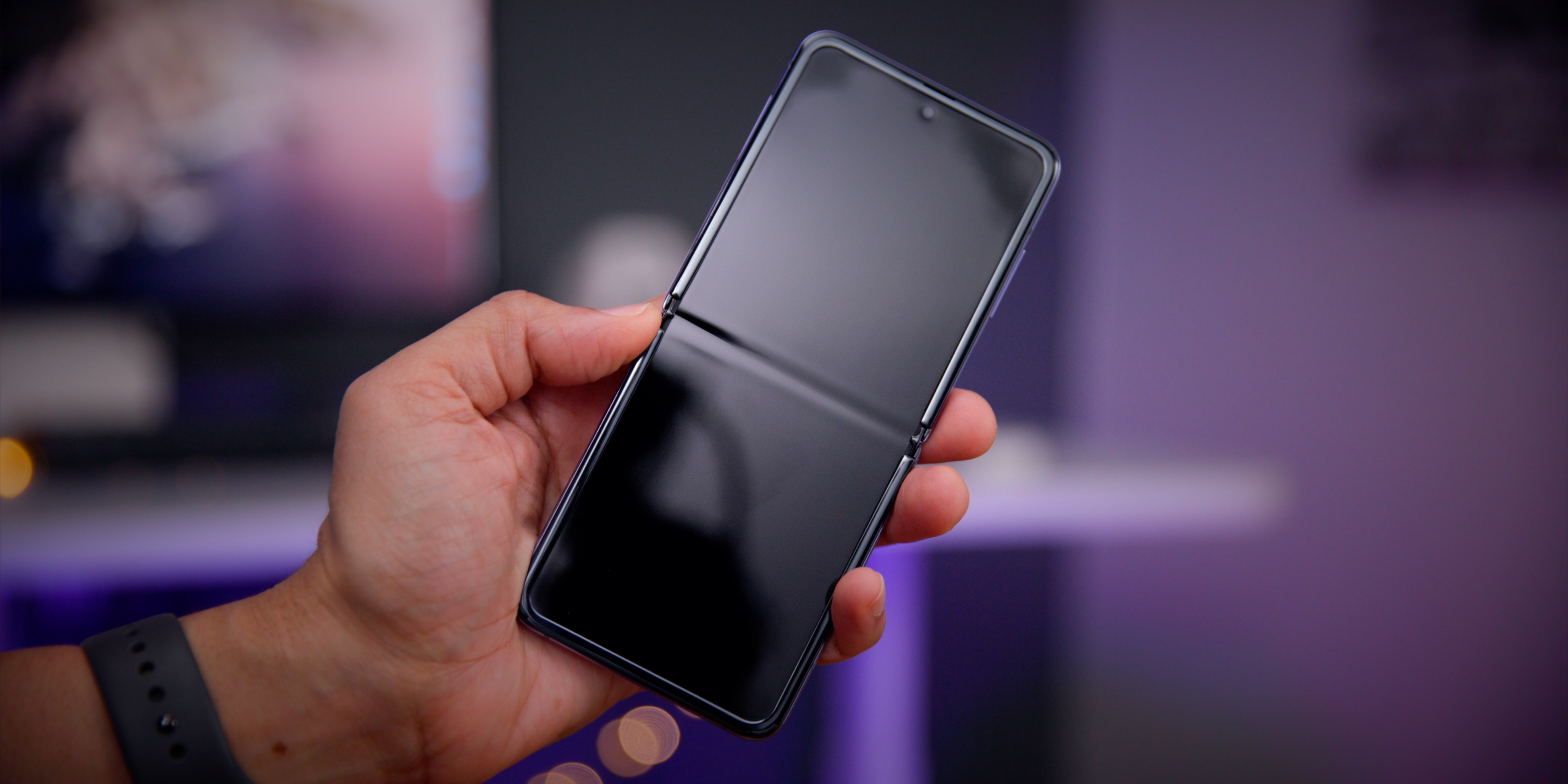 The portion of the screen where the glass folds in half features a noticeable crease, which is to be expected. You can feel the crease if you run your fingers over the middle of the display, but I honestly don’t think it’s a big deal. The crease sort of disappears when looking at the phone straight on with a white background, and even when it is noticeable, it didn’t bother me. 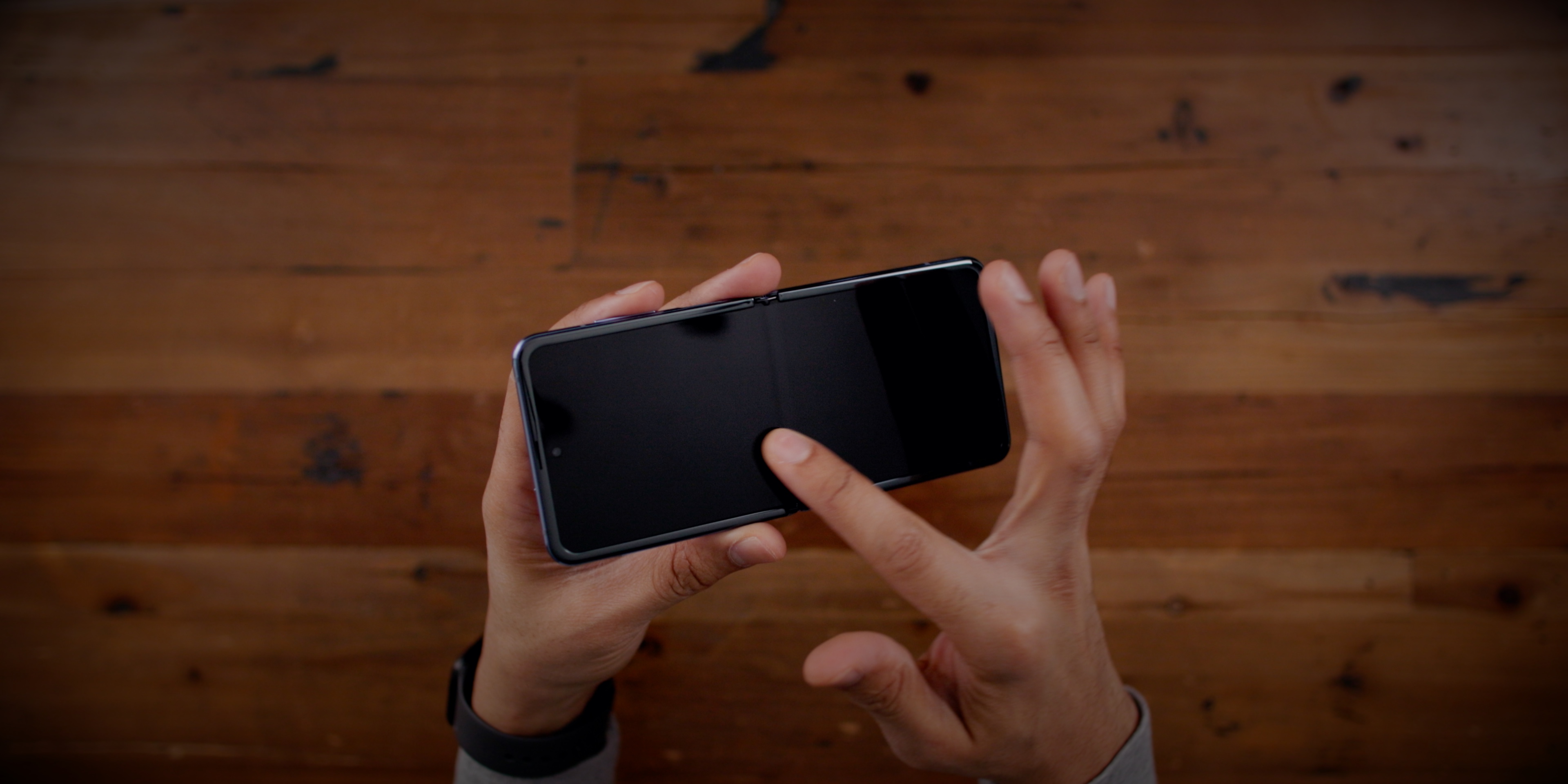 The hinge is stiff, but it feels very well built. Some users may find it difficult to open and close with one hand. After some practice, I learned how to open and close the phone with a single hand, but I can imagine that being difficult for most users.

What’s more concerning about the Samsung Galaxy Z Flip is its long-term durability. For a phone like this with major exterior moving parts, it’s much more susceptible to damage than your typical smartphone. For instance, we’ve come a long way in the area of dust and waterproof capabilities over the past few years, but the Galaxy Z Flip lacks both. 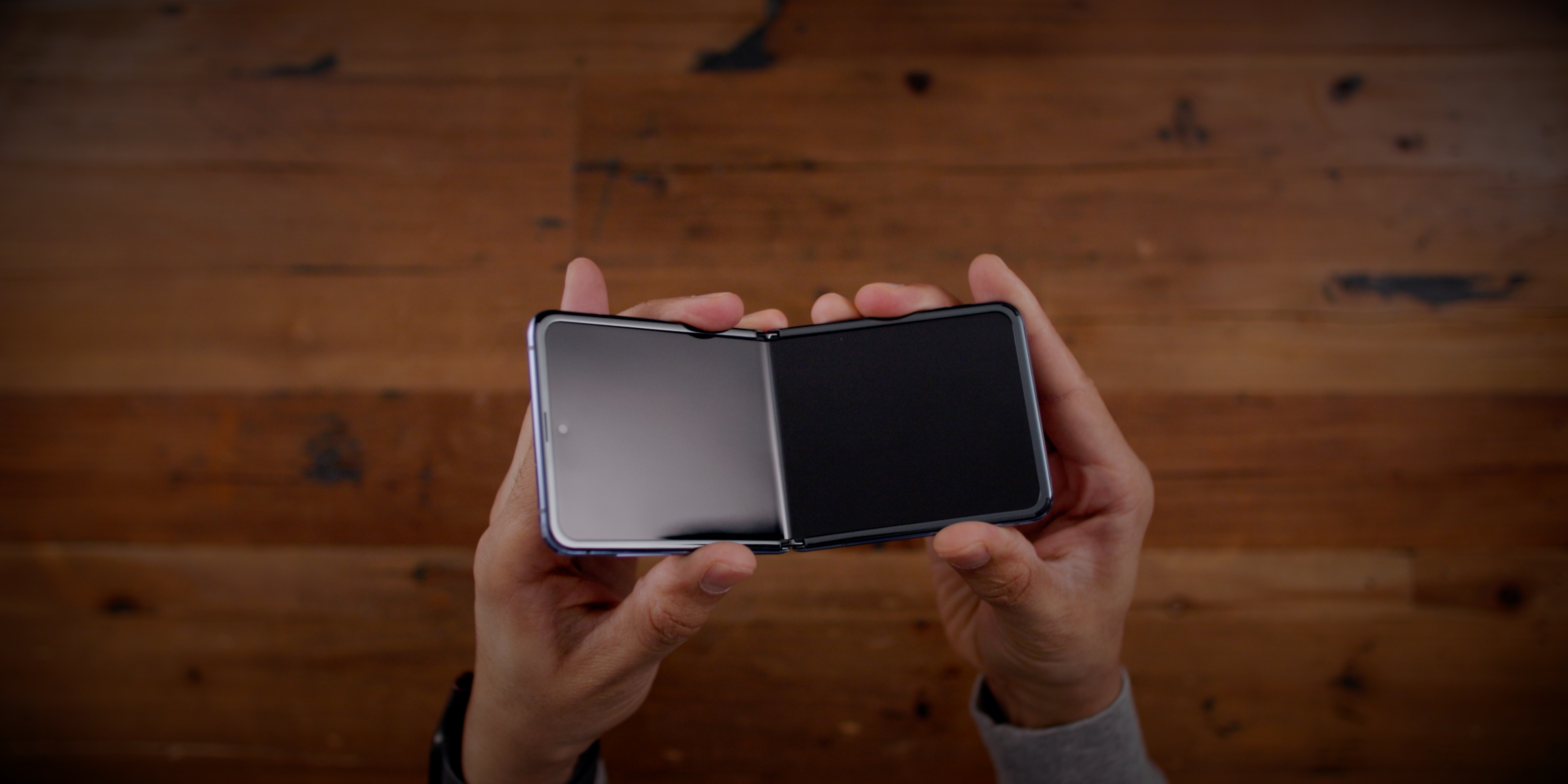 It’s a bit scary to think about accidentally closing debris inside the phone, which would risk harming the screen. You’ll need to think a lot more when using this phone to make sure you don’t accidentally damage it, which is something I almost never think about when lugging around my iPhone 11 Pro Max.

I want an iPhone Flip

Remember, though, that these are the very early days of foldable screen technology, and we’ll likely look back several years from now and realize how rudimentary these devices were. But even at this early stage, I’m fairly convinced that this is not just a fad, but it’s something that may be a benefit to users in the future. 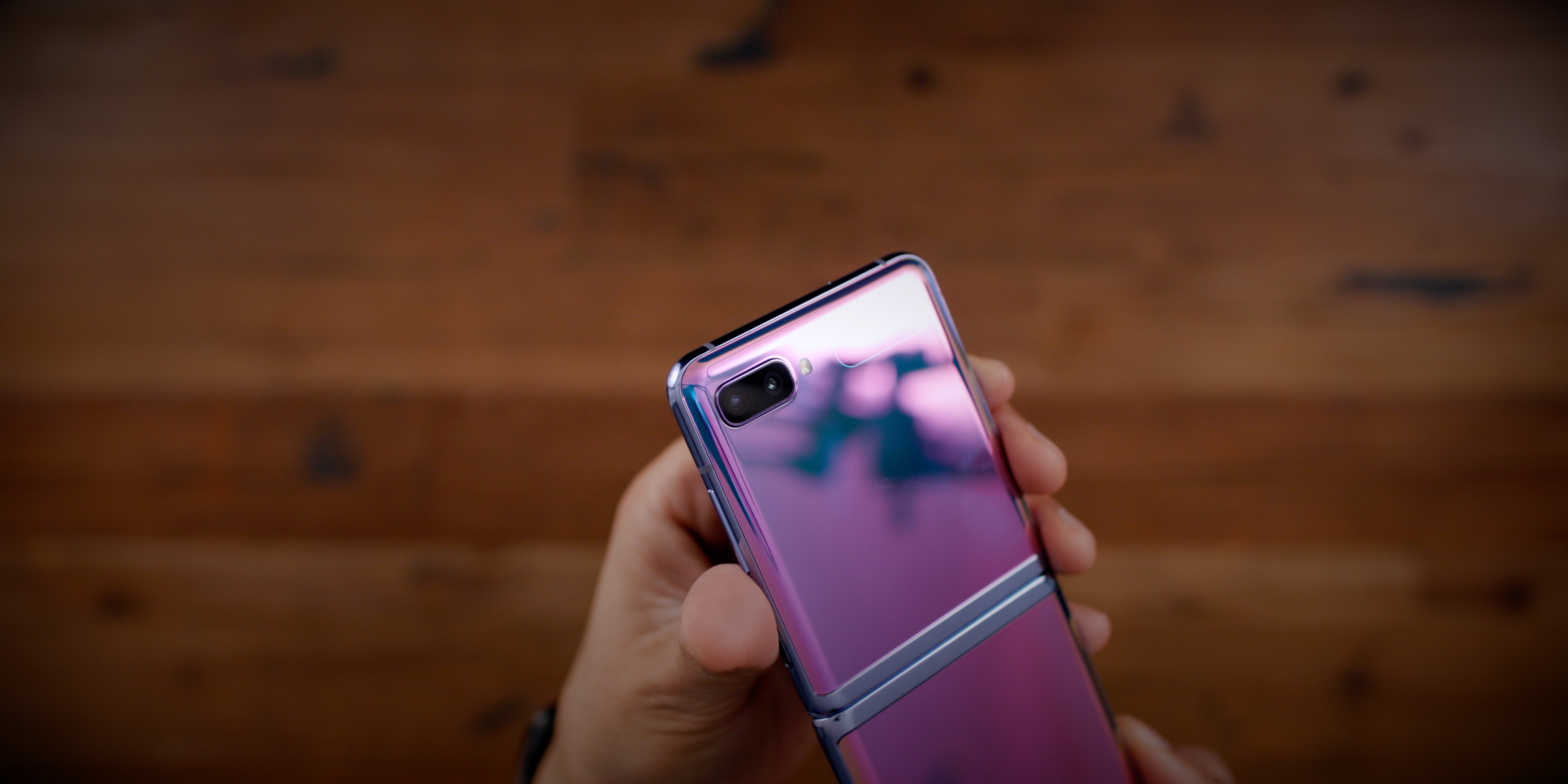 Imagine a phone that’s slightly thinner than the iPhone 11 Pro Max that could fold in half and reduce its footprint to one that’s significantly more pocketable. Imagine that phone being much more refined than the current crop of foldable phones, with the type of durability that we expect from a modern smartphone. 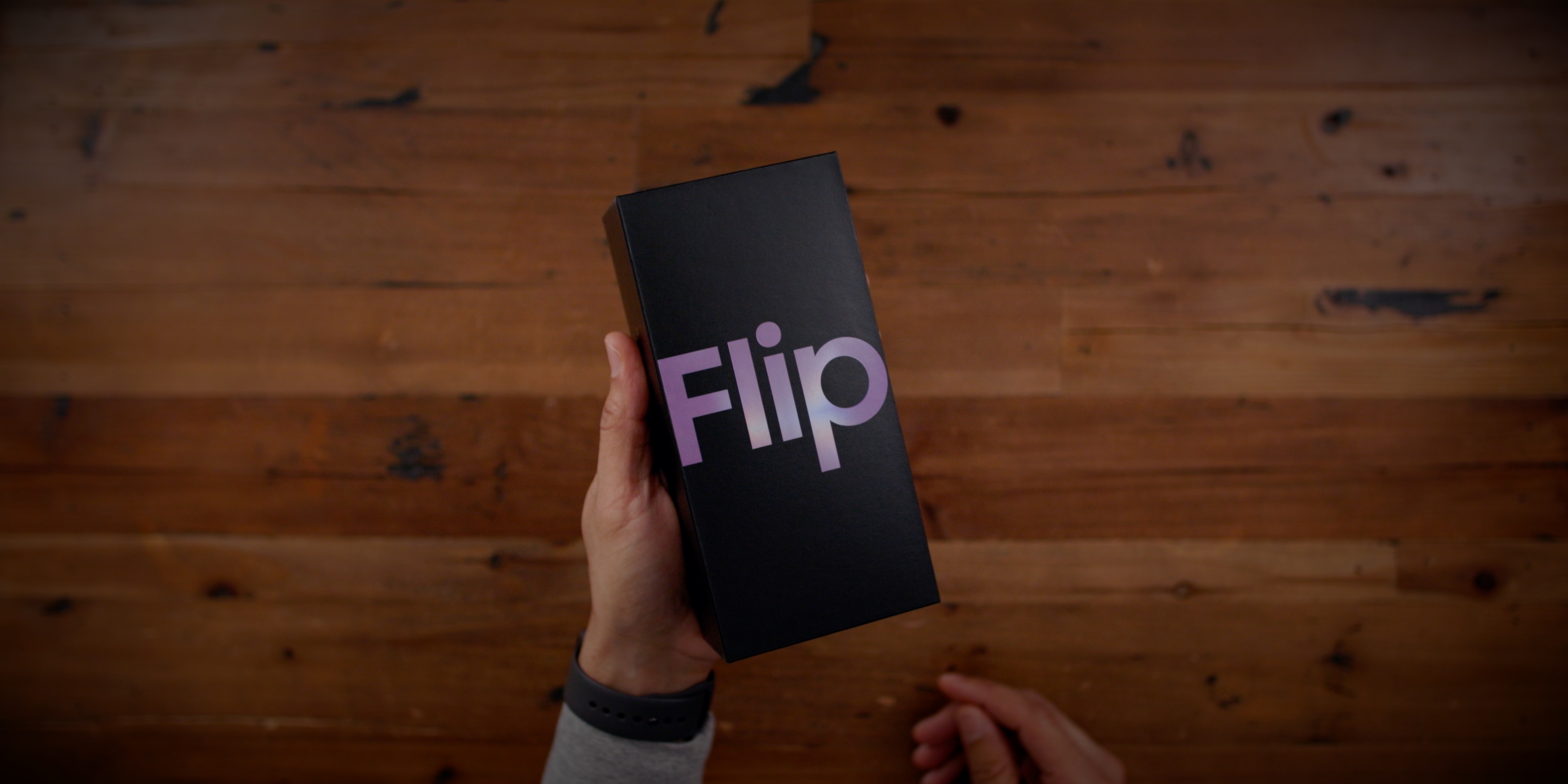 Apple generally isn’t the first to market with new technologies like this anyway, but when it finally does enter, it’s usually with a more refined product. The Galaxy Z Flip showcases potential, but it still feels like a concept to me, and in its current state it’s not the type of product that Apple would release to the public. 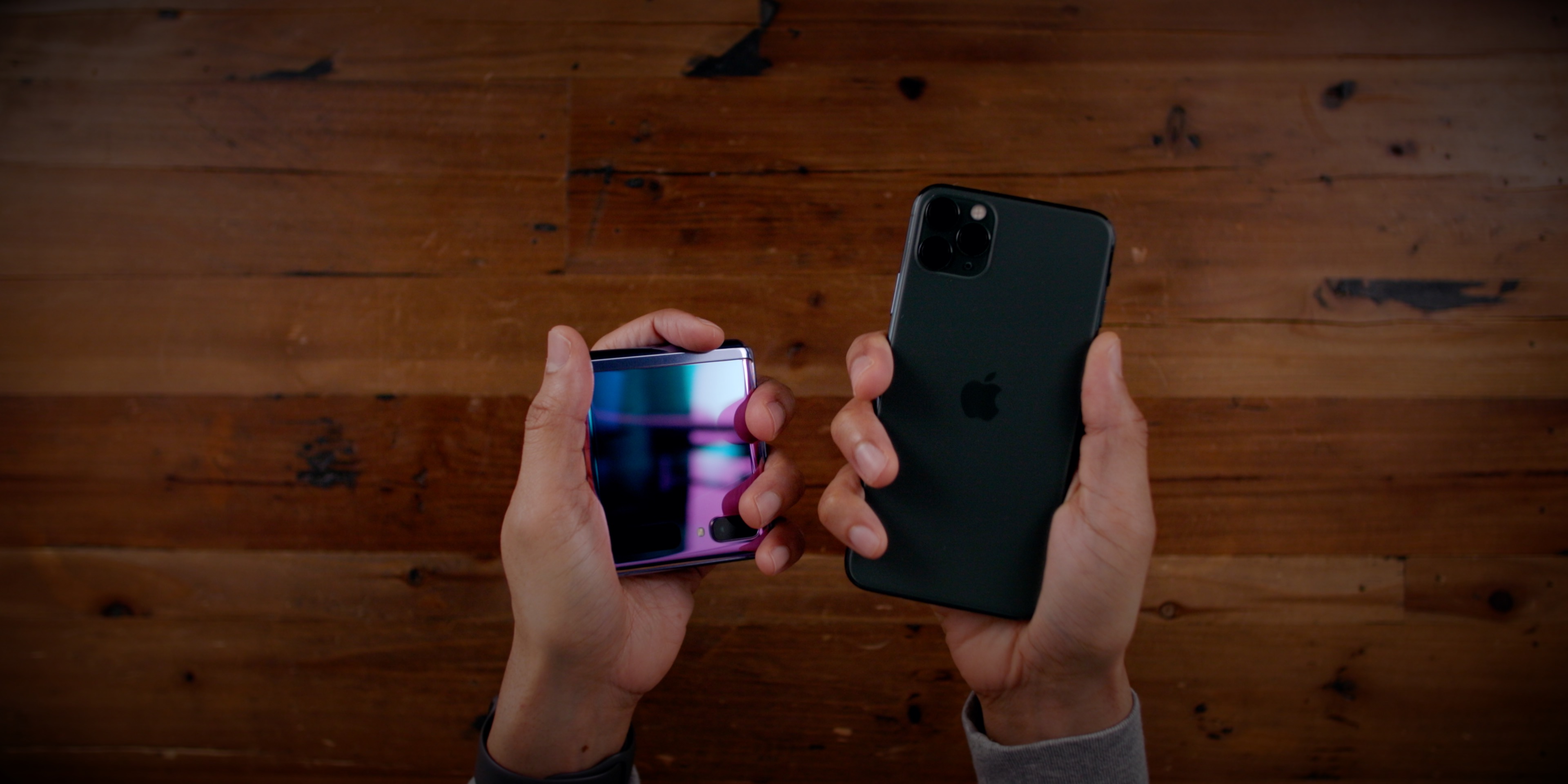