You do not have to be a massive Game of Thrones fan to know that the hit show returns with season 7 on July 16th, and as if excitement was not building quickly enough, HBO has now sought to ratchet it up a notch by releasing a new trailer to the public.

The trailer itself features a compilation of the show’s characters – or at least those who have not yet been killed off by the show’s makers – as they prepare for the great war ahead. The trailer, just as previous trailers and indeed the previous seasons, features the usual array of impressive costume design work. As much as Game of Thrones features plenty of CGI, the work involved in making characters look the part via costumes is impressive to say the least.

While Sansa features heavily in the trailer, it is Petyr Baelish who narrates the opening, telling viewers “don’t fight in the North. Or the South. Fight every battle everywhere. Always. In your mind.” Also included as part of the trailer is a visit from Cersei, Dany, Jon, Arya, and other well known members of the crew with a score featuring an ominous tune that we think hardcore fans will remember from one of last season’s biggest moments. We won’t spoil it for you though, so be sure to watch the trailer and see if you can spot it for yourselves.

Even after the trailer has finished, Sansa returns to say: “When the snows fall, and the white winds blow, the lone wolf dies, but the pack survives.”

While previous seasons of Game of Thrones have not been particularly long, this one is set to be the shortest yet with only seven episodes to air. However, while there will be less episodes to enjoy, it has already been confirmed that the final one will be the longest yet – running no fewer than 81 minutes. 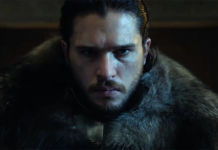