Home General Gift Guide: What do you buy for the person who already has...
13469
SHARES
ShareTweet 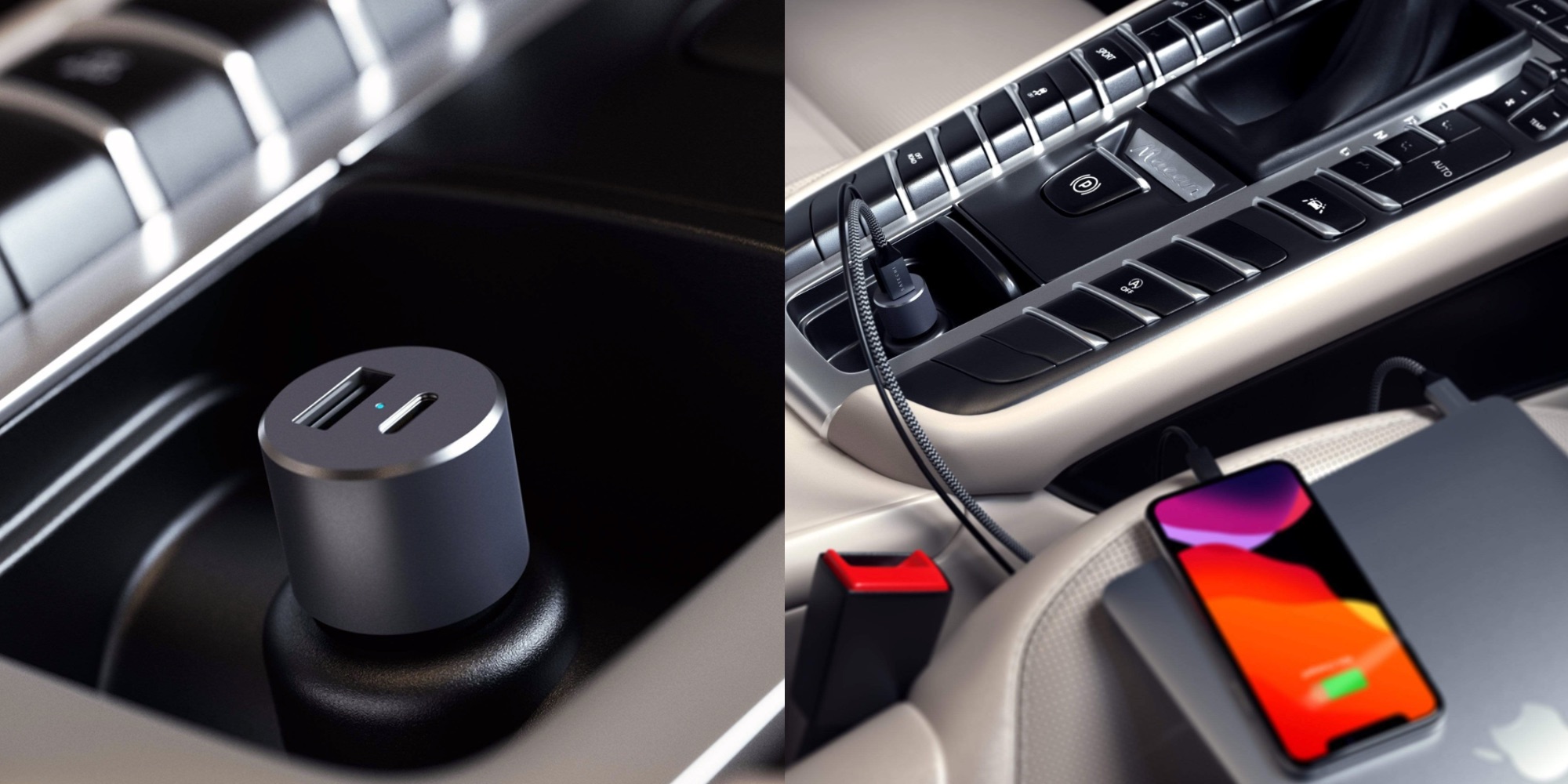 How do you shop for a tech-savvy person who buys the latest of everything before the holidays arrive? I am totally that person for my family when it comes to the iPhone, iPad, Apple Watch, and AirPods.

There are some Apple products that I can never have enough of like App Store gift cards and another HomePod, but stocking stuffers and expensive smart speakers aren’t always the right gift.

That’s why I’m approaching my gift recommendations this year a bit different. Last year I covered an area of great interest and expertise with smart home products, and most of those picks are still applicable.

But there’s also a lot of new technology out this year as well as gadgets I’ve received for testing — new technology that I’m super glad to see exist. Read on to see my favorite picks for new tech that I’m grateful for this year.

Apple first started replacing its proprietary MagSafe 2 connector with USB-C on MacBooks in 2015. In theory, this opened the door for charging Apple laptops with portable batteries and car chargers similar to iPhones and iPads.

The only catch was power delivery speeds: even the lightweight 12-inch MacBook would struggle to keep a charge during use on car chargers and battery packs. A better USB-C spec called PD for power delivery cranked up the peak wattage, and now it’s totally possible to push a MacBook Pro to the limit while charging in the car.

Satechi’s awesome $29 72W USB-C PD Car Charger is the first car charger I’ve tested with this capability, and mine is an absolute treasure to me. It features two ports: a 60W USB-C PD port and a 12W USB-A port. This lets you charge an iPhone or iPad simultaneously while charging a MacBook Pro — even during use.

It’s amazing for getting work done as a passenger on a long road trip. I’m still amazed at how I can arrive somewhere with 100% battery in my MacBook Pro when just a few years ago my 12-inch MacBook could barely keep its battery percentage while charging.

Anker also has USB-C car chargers, including one with a 30W USB-C PD port and another with dual 18W USB-C PD ports, but neither match the 60W output from Satechi.

It’s not just mobile USB-C chargers for Macs that have improved. MacBook Air and MacBook Pro wall chargers have also advanced this year — not in terms of power delivery but in miniaturization.

Thanks to new GaN (gallium nitride) charging bricks, you can find fast and reliable iPad Pro and MacBook Pro wall chargers that are more compact than what Apple includes in the box. 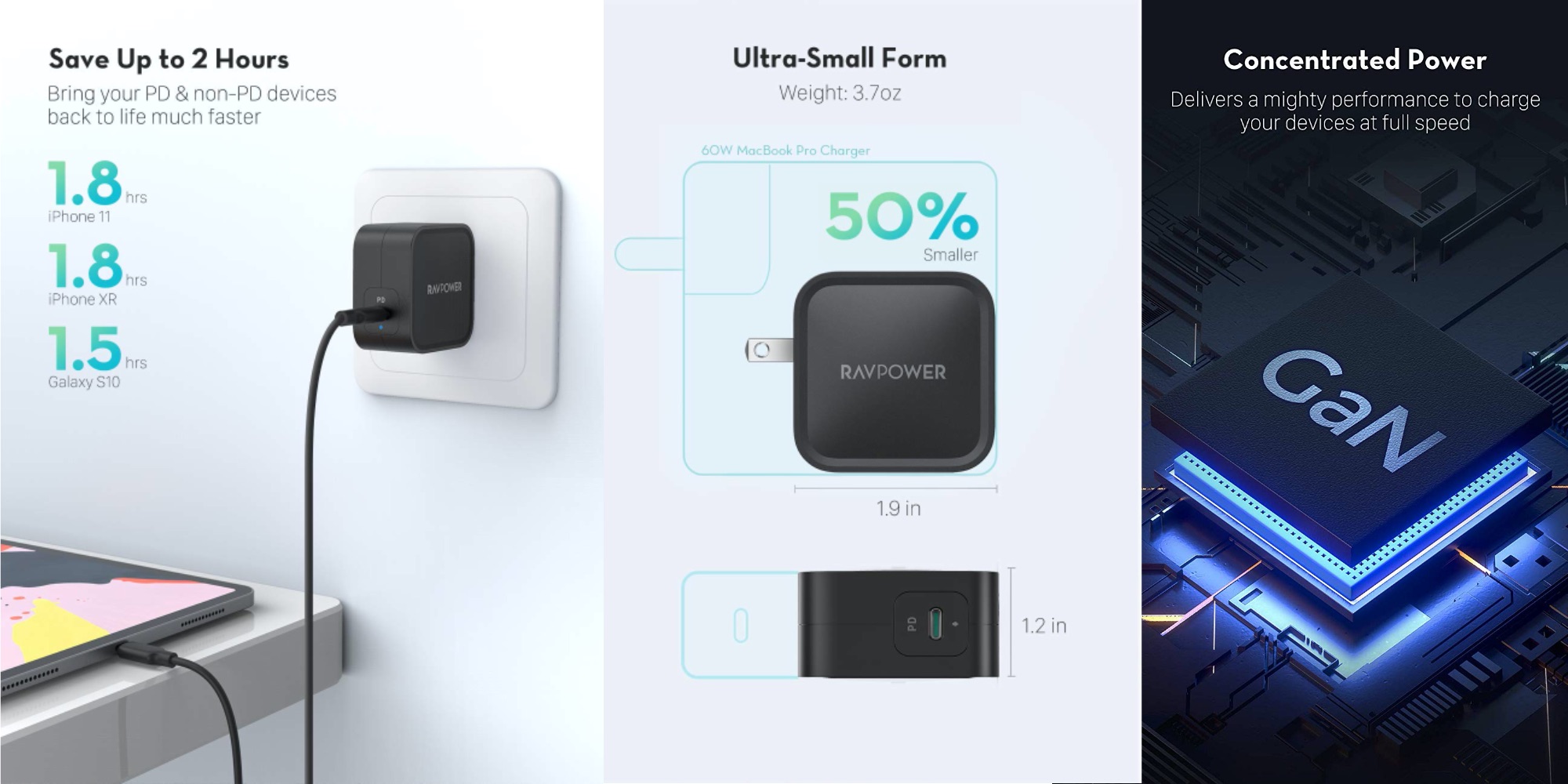 RAVPower’s 61W USB-C Power Delivery GaN Wall Charger is my go-to solution for iPad Pro and MacBook Pro. I’ve bought two so far and am just a few clicks away from owning a third.

The $49 charging brick regularly goes on sale for as low as $29, and the fact that it’s black like my MacBook keyboard and not white like Apple’s chargers pleases me to no end. It pairs perfectly with the black Monoprice Essentials USB-C charging cable, available in 0.5 to 4 meter lengths from $6 to $12.

The all-black compact wall charger and extra long charging cable is one of my top tech discoveries this year.

This is also the year that Apple cancelled its failed AirPower charging mat project first announced in 2017. Lots of AirPower alternatives have tried to feel the wireless charging pad void for simultaneously charging an iPhone, Apple Watch, and AirPods.

While no one has matched Apple’s vision of lay-it-anywhere-on-the-mat wireless charging (including Apple), there is one similar 3-in-1 charging solution that stands out. 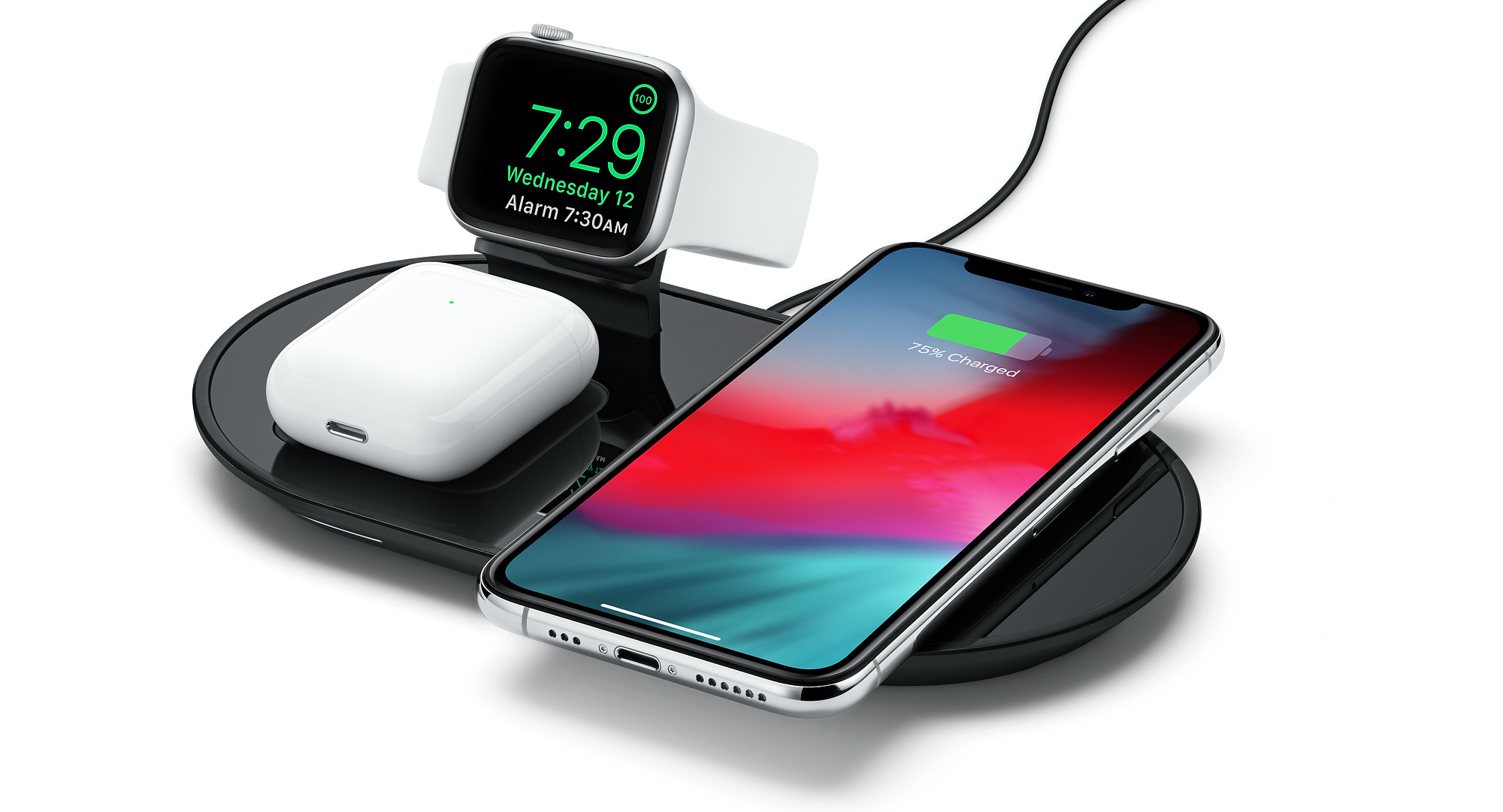 Mophie’s recently introduced 3-in-1 Wireless Charging Pad has a dedicated spot for charging any Apple Watch, AirPods Pro or AirPods with Wireless Charging Case, and iPhone 8 or later. It’s not cheap at $140, but it’s very nice to own and makes for a great gift.

This has been my bedside charger since the fabric-covered version debuted a couple months ago. It looks a lot better than three individual chargers on my night stand, and packing a single charger in my bag during travel is a dream. 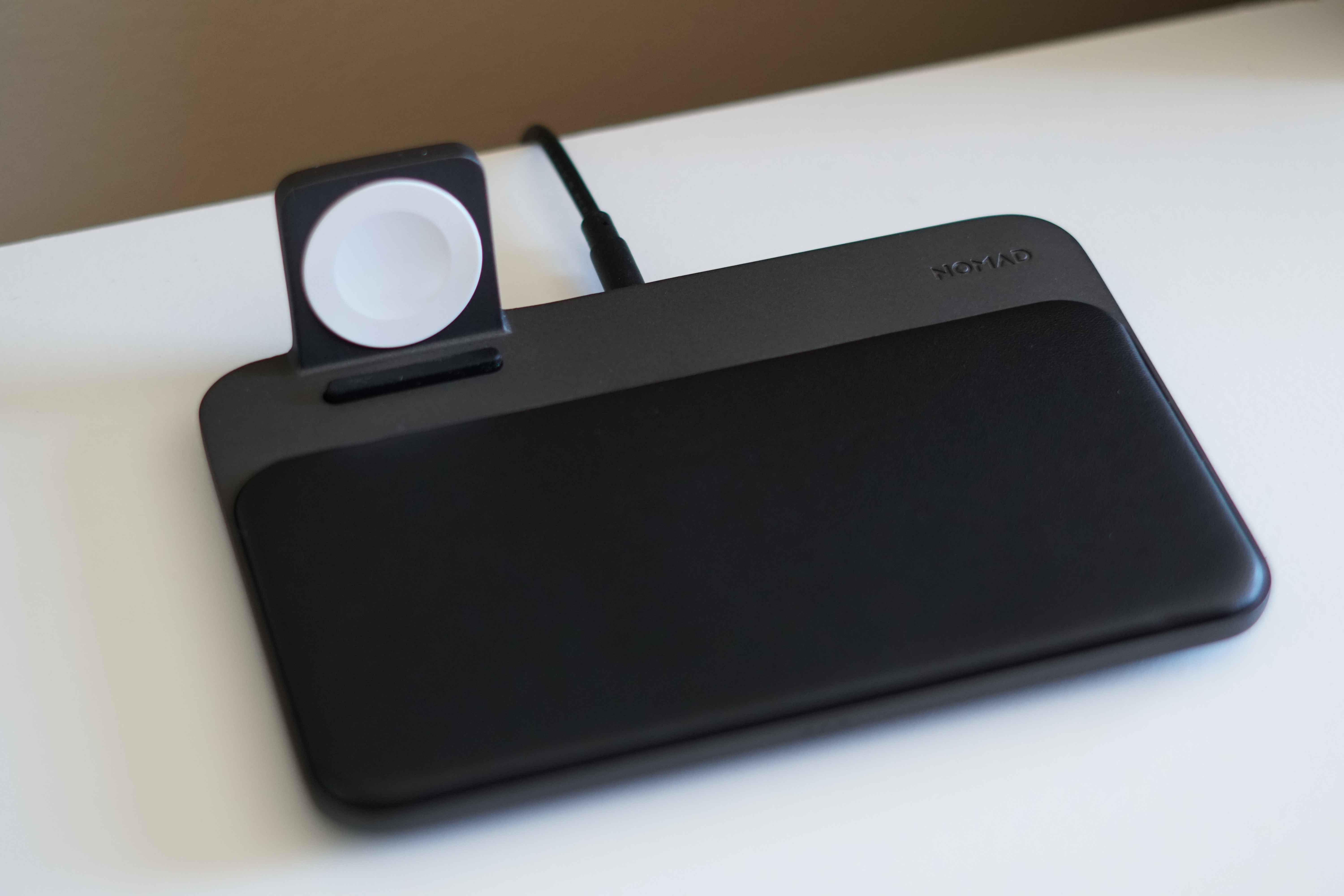 Prior to Mophie’s solution, I spent a few months testing Nomad’s version (pictured above) that launched first. Both offer a very similar experience, but I prefer the tighter design of Mophie’s personally. If you don’t need the Apple Watch charging piece, Mophie also sells a similar 2-in-1 wireless charging mat with a USB-A port for charging a third device over the wire for $60 less.

Speaking of one year ago, I definitely didn’t expect to ever include a Samsung TV on my Apple gift guide. That changed at the turn of the year when Apple introduced AirPlay 2 for smart TVs without an Apple TV box connected.

Samsung was the first to release AirPlay 2 support for wirelessly sending audio or video from an Apple device to a smart TV back in March. 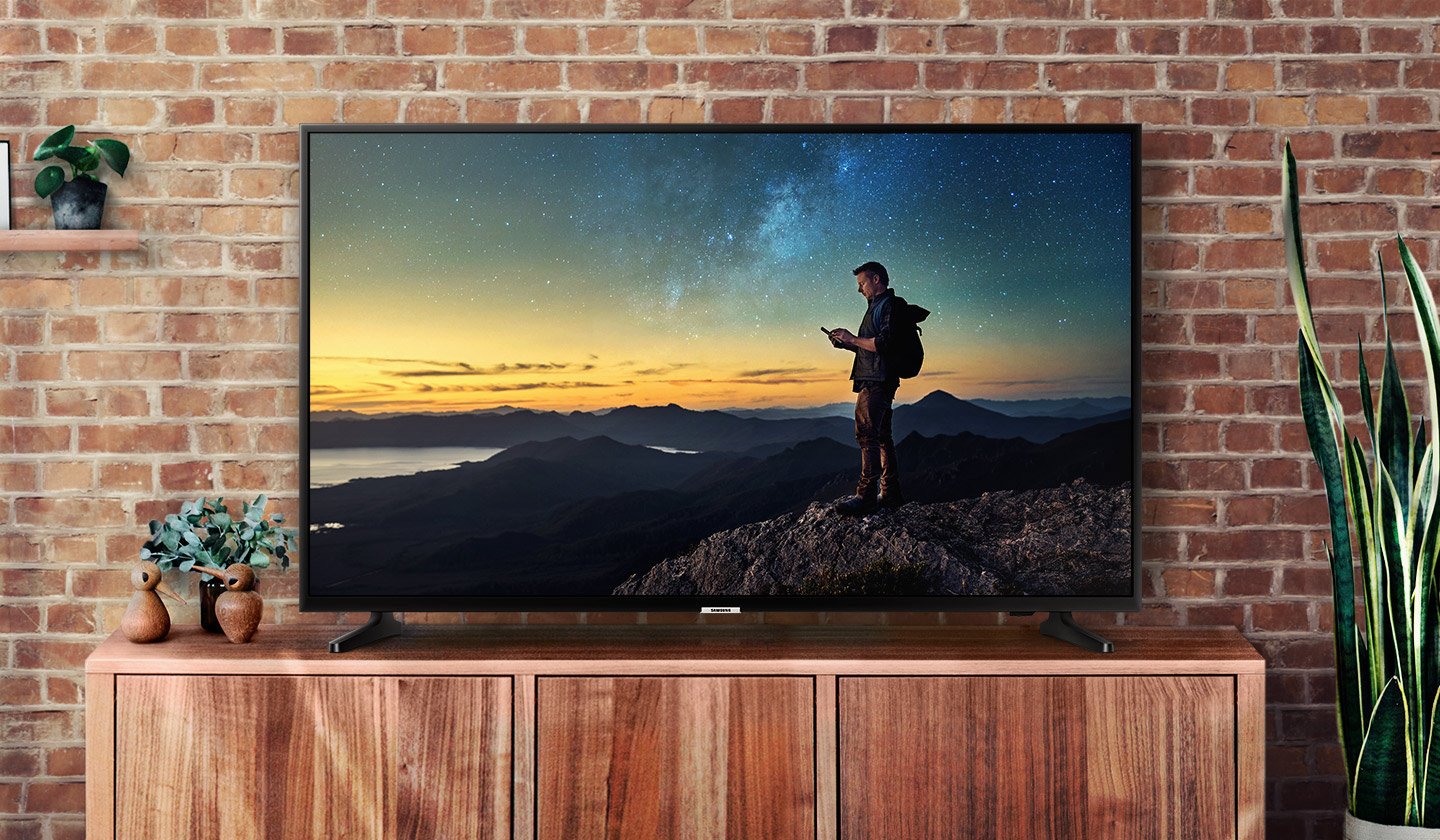 On the day that Samsung announced their Apple features were shipping, I rushed over to Best Buy to find the lowest priced compatible Samsung TV just to try. That turned out to be the UN43NU6900FXZA, a 43-inch 4K LED 2018 model TV for $278.

For context, the current Apple TV lineup ranges from $150 to $200 before you factor the cost of a new TV. 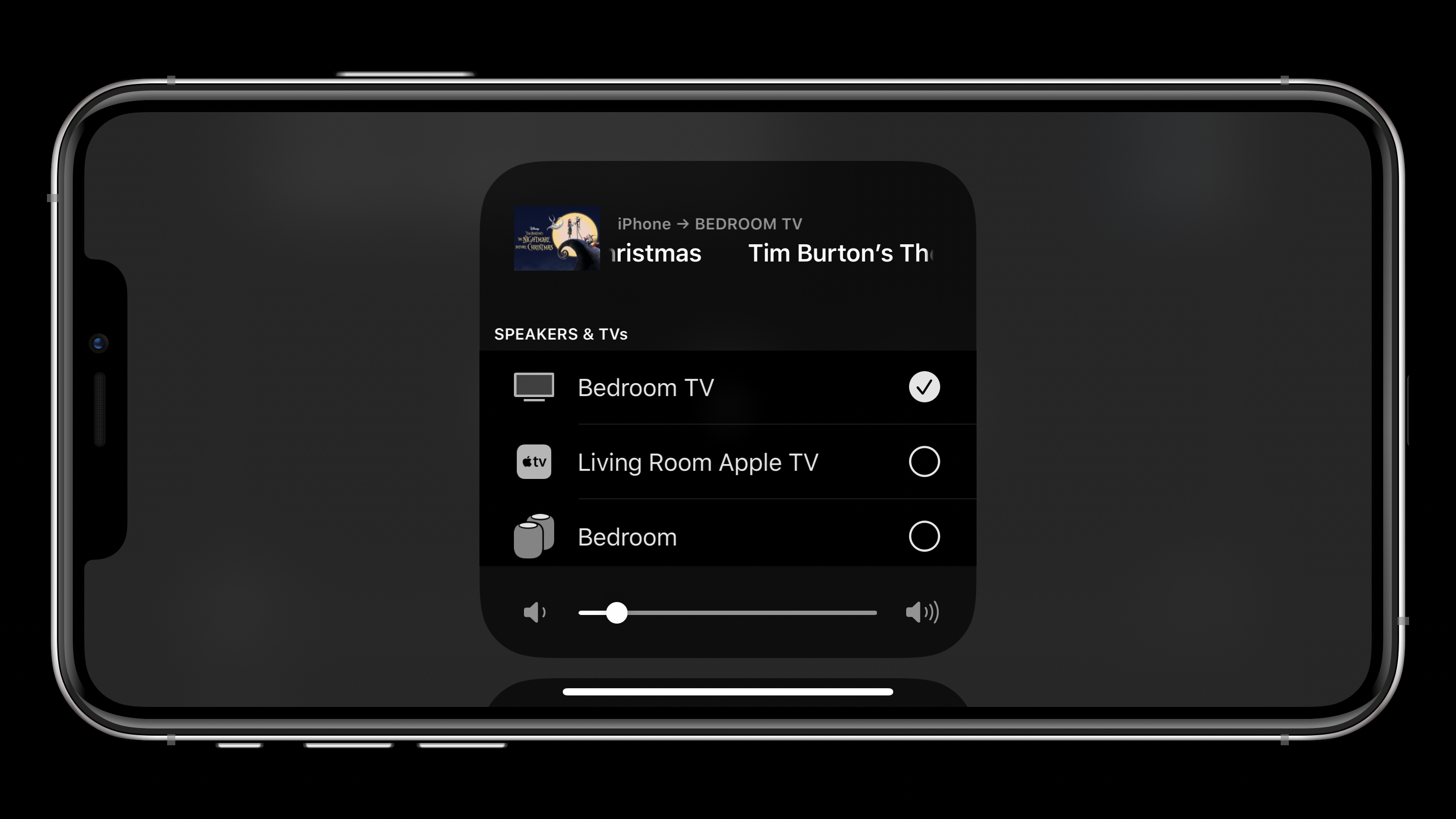 I’ve been using the Samsung smart TV with no Apple TV as my bedroom TV since AirPlay 2 and the Apple TV app appeared in a software update. Highly recommended as an affordable way to put both Apple features in a new room without spending a fortune. There’s no Disney+ app yet, but that’s no problem with AirPlay 2 sending movies over from my iPhone.

Prior to September, I would have said Wi-Fi 6 was too new to consider this year. Wireless routers that support Wi-Fi 6 are markedly more expensive than 802.11ac wireless access points, and you need Wi-Fi 6 devices to best take advantage of the new Wi-Fi standard (save for improvements in speed delivery between multiple mesh routers). 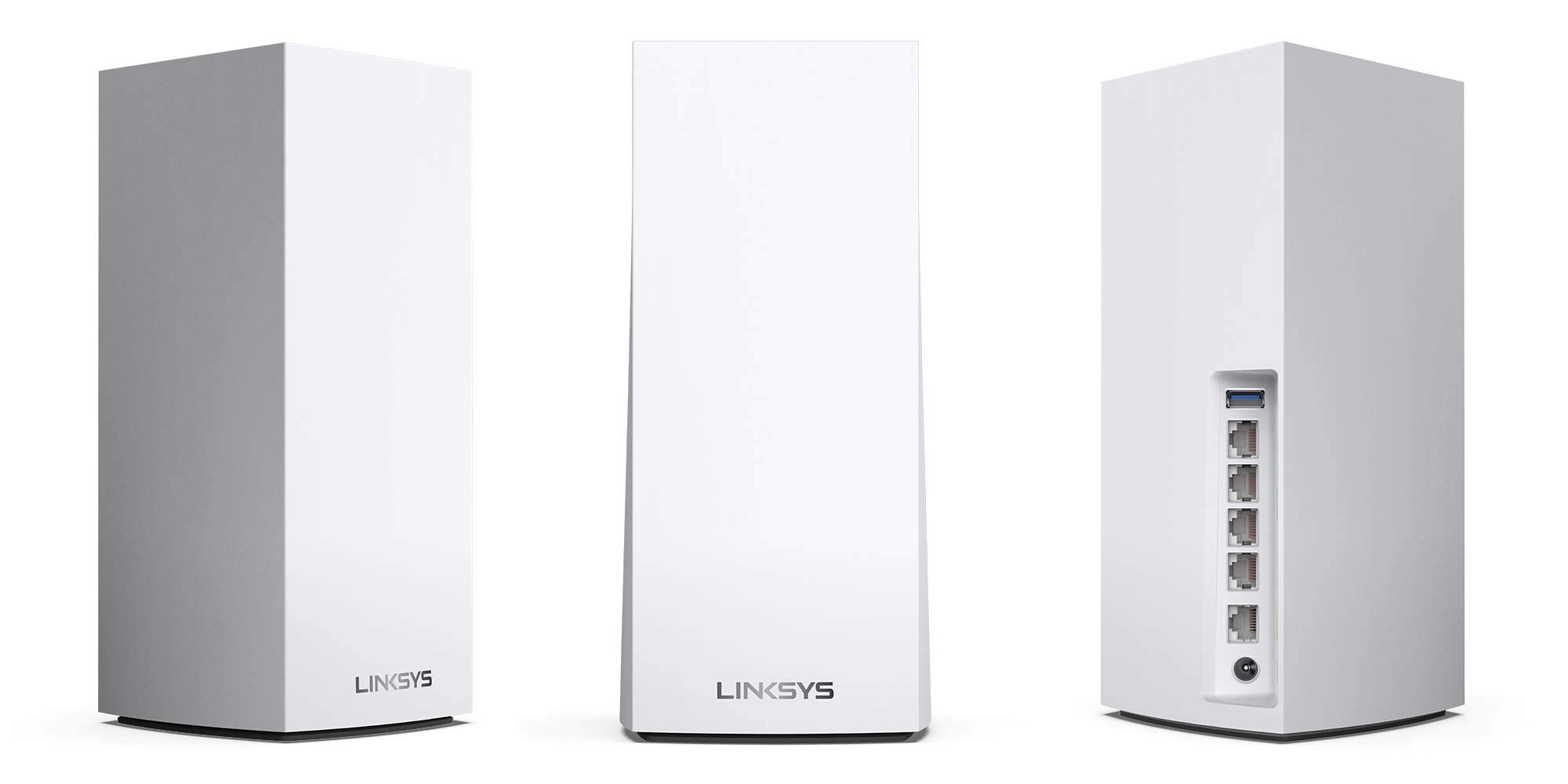 If you’re considering a Wi-Fi upgrade for your family or really trying to treat the tech-savvy person in your life, a Wi-Fi 6 mesh router feels like a future pick this year that you can buy now.

I’ve been testing the Linksys Velop Wi-Fi 6 Mesh Router (regular $400, currently on sale for $300) for a few weeks with my iPhone 11 Pro Max, and early results are promising. This is a gift that will continue to deliver as your tech family or friend upgrades their gadgets across 2020.

If Wi-Fi 6 adoption feels too far out in the future, you can get more mesh bang for your buck (in black) with a Linksys Velop Wi-Fi 5 mesh router two-pack.

My two-year-old son played a game of hide-and-seek with the black Magic Mouse that came with my iMac Pro over the summer, except he forgot the whole seek part.

I needed a new mouse for my desk but didn’t want to buy the same mouse again only to have it eventually turn up somewhere. I tried the Logitech MX Master 2S mouse instead. I liked the feel and control of the MX Master mouse so much that I kept using it even after my toddler revealed that my Magic Mouse was somehow tucked inside a crevice in my desk chair.

Then the well-reviewed MX Master 2S was replaced with an even better reviewed $99 Logitech MX Master 3 advanced mouse. I received one for testing alongside the $99 Logitech’s MX Keys keyboard, and I have to say the two are a great pair.

The MX Master 3 mouse also has an even better feel in the hand than the MX Master 2S, and more buttons for customizing actions with a click. The MX Keys wireless keyboard is backlit unlike Apple’s standalone Magic Keyboard.

Then there’s reliable fast switching between paired devices on both the mouse and keyboard. I have each paired to my iMac Pro and my iPad Pro, and switching between which device I’m using is as easy as a button press. Highly recommended as a great way to improve existing hardware or take the iPad Pro even further.

Apple released the 11-inch iPad Pro and redesigned 12.9-inch iPad Pro before the end of last year. Keyboard case maker Brydge had to go back to the drawing board with its special keyboard for making iPads feel like MacBooks.

Brydge proved it was up for the challenge when it launched a redesigned keyboard case for the all-new iPad Pro designs earlier this year. While it’s not the iPad keyboard solution for me (I prefer the on-screen keyboard or Smart Keyboard Folio), I did receive one for testing this year for someone in my house.

My wife was going back to school to advance her nursing degree, and her 12-inch MacBook from April 2015 was really starting to show its age — even after a keyboard repair.

Naturally, I took this opportunity to try the newest 12.9-inch iPad Pro for myself and let her inherit my 11-inch iPad Pro and Smart Keyboard Folio. iPadOS 13 made switching from the Mac to the iPad full time finally possible for her, but she soon let me know how cramped the 11-inch Smart Keyboard felt to her.

Brydge Pro for iPad Pro to the rescue. I suggested she try the Bluetooth, backlit keyboard case, and she immediately took to the MacBook-like keyboard case. I haven’t seen her use the iPad Pro without the Brydge Pro ($129, regular $149) since the day she got it.

It may not be for me, but it’s absolutely a highly regarded keyboard case among former Mac and PC users leveraging the power of the iPad now.