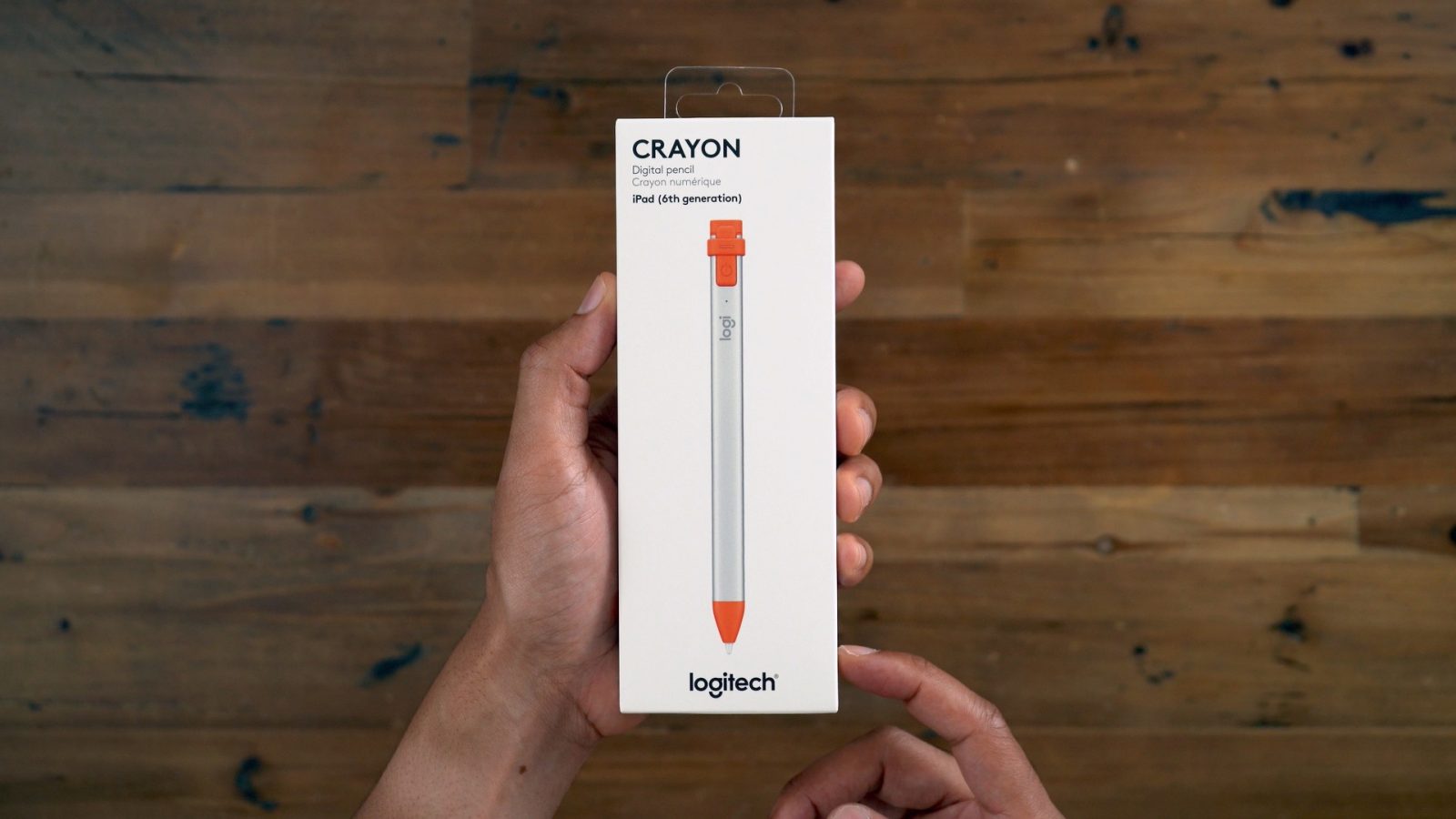 Earlier this year during its education-focused event at a Chicago high school, Apple revealed the 6th generation iPad with a base price of only $329. This was the first non-Pro iPad to support the Apple Pencil. Instead of creating a cheaper Apple Pencil or dropping the price of the existing version, Apple lent its technology to Logitech, and thus the $49 Crayon digital pencil was born.

How does the Logitech Crayon compare with the Apple Pencil for 6th-generation iPad users? Watch our video unboxing and review for the full scoop.

Although the Logitech Crayon uses Apple Pencil Technology for pixel perfect precision, palm rejection, and overall responsiveness, it’s quite a different experience when compare to Apple’s own stylus.

First and foremost, the Logitech Crayon only works with the 6th-generation iPad. It doesn’t work at all with any version of iPad Pro, so if you have an iPad Pro, you’ll want to stick with the traditional Apple Pencil.

Secondly, the Logitech Crayon is $30 cheaper, at $69.99. This fact alone will make it appealing to those on a tight budget. Just think, you can score an iPad 6 + Logitech Crayon, both brand new, for $399 before tax.

The next big difference is with overall design and build quality. The Logitech Crayon stands in stark contrast to the minimalistic look and feel of the Apple Pencil. The Apple Pencil is taller, cylindrical, and features a shiny white glossy surface. It’s also more prone to roll off a table than the Logitech Crayon, even though it’s been weighted in a way to help prevent that.

The Logitech Crayon sports a kid-friendly design, with a flat shape to help it resist rolling. It also comes with a bright orange cap, power button, and smart tip area. The cap, which covers the female Lighting port used for charging, is tethered to the Logitech Crayon to help prevent it from being lost.

Another difference between the Logitech Crayon and the Apple Pencil has to do with pairing and charging. With the Apple Pencil, Bluetooth pairing is accomplished by connecting the Apple Pencil’s Lightning connector directly to an eligible iPad. Such a thing has proven to be a little bit fiddly, so Logitech eliminated the idea of pairing in favor of an instant connection with the 6th-generation iPad. All you need to do is hold the power button near the top of the Logitech Crayon for a second, and the stylus is immediately available for use.

Charging the Logitech Crayon differs from the Apple Pencil in that it features a female Lightning connection. This means that you can easily charge your Logitech Crayon with a Lightning cable, just like you do with your iPad, iPad, AirPods, etc. It also means there’s no direct connection to the iPad for charging, a feature that’s always looked a little weird with the Apple Pencil, but proves to be handy when in need of a quick charge.

Because it doesn’t pair with the iPad like an Apple Pencil, there’s no battery widget available for the Logitech Crayon within iOS. Instead, Logitech provides an LED battery indicator on the device itself. A single press on the power button reveals the battery status via the LED. A green light results when battery is greater than 10%, a red light for less than 10%, and a flashing red light for less than 5%.

The Logitech Crayon works very much like the Apple Pencil when using it to draw with your favorite apps that support stylus input. For example, palm rejection is still in the equation, as is the type of responsive, precision input that the Apple Pencil offers.

Yet, the overall feel of the device while it’s in your hand, is quite different. To me, the Logitech Crayon actually feels more comfortable to use. I’ve always felt that the Apple Pencil was a little bit too thin for my hands to comfortably grip. The Logitech Crayon, on the other hand, with its squared-off design, allows more of you hand to come into contact with the surface of the device. This is likely more of a preference thing, but I enjoyed the feel of the Crayon over the Apple Pencil in both short bursts, and long usage marathons.

Unfortunately, Crayon users coming from an Apple Pencil will have to contend with the fact that pressure-sensitivity, a big selling point of the Apple Pencil for artists, is non-existent in Logitech’s stylus. It’s the main feature that separates these two devices as far as general functionality is concerned. It means that pressing down on the display with your Logitech Crayon has no bearing on stroke weight, which significantly affects the way you’ll use the stylus from an artistic perspective.

The Logitech Crayon is based on Apple Pencil Technology, but it’s not just a rebranded Apple Pencil — this is a different device, with a less advanced feature-set that’s primarily aimed at note-taking and markup situations.

That’s not to say that the Logitech Crayon can’t be used to make art, because it can. Before Apple Pencil pressure-sensitivity, styli existed for making art, and the Crayon can be used to do so as well; you’ll just have to work within this major limitation. The Crayon also supports tilt functionality, which allows for thicker or thinner lines based on the angle of that you rest the tip on the iPad’s screen. I find the Apple Pencil better for tilt functionality just in the way the stylus is physically designed.

If you need a reliable stylus for taking notes, marking up, and for limited artistic use, then the Logitech Crayon makes for a compelling, and cheaper, alternative. However, it is not a 1:1 Apple Pencil replacement, especially when it comes to artistry. The lack of pressure-sensitivity plays a major role in how drawing apps are used, because it affords much less flexibility and overall nuance when it comes to things like stroke weight.

But for those of you who don’t care about drawing, painting and the like; for those hard core note-takers and markup people, the Logitech Crayon may prove to be a cheaper, and for some users, a more comfortable Apple Pencil alternative.

What are your initial impressions about the Logitech Crayon? Sound off down below in the comments with your thoughts.