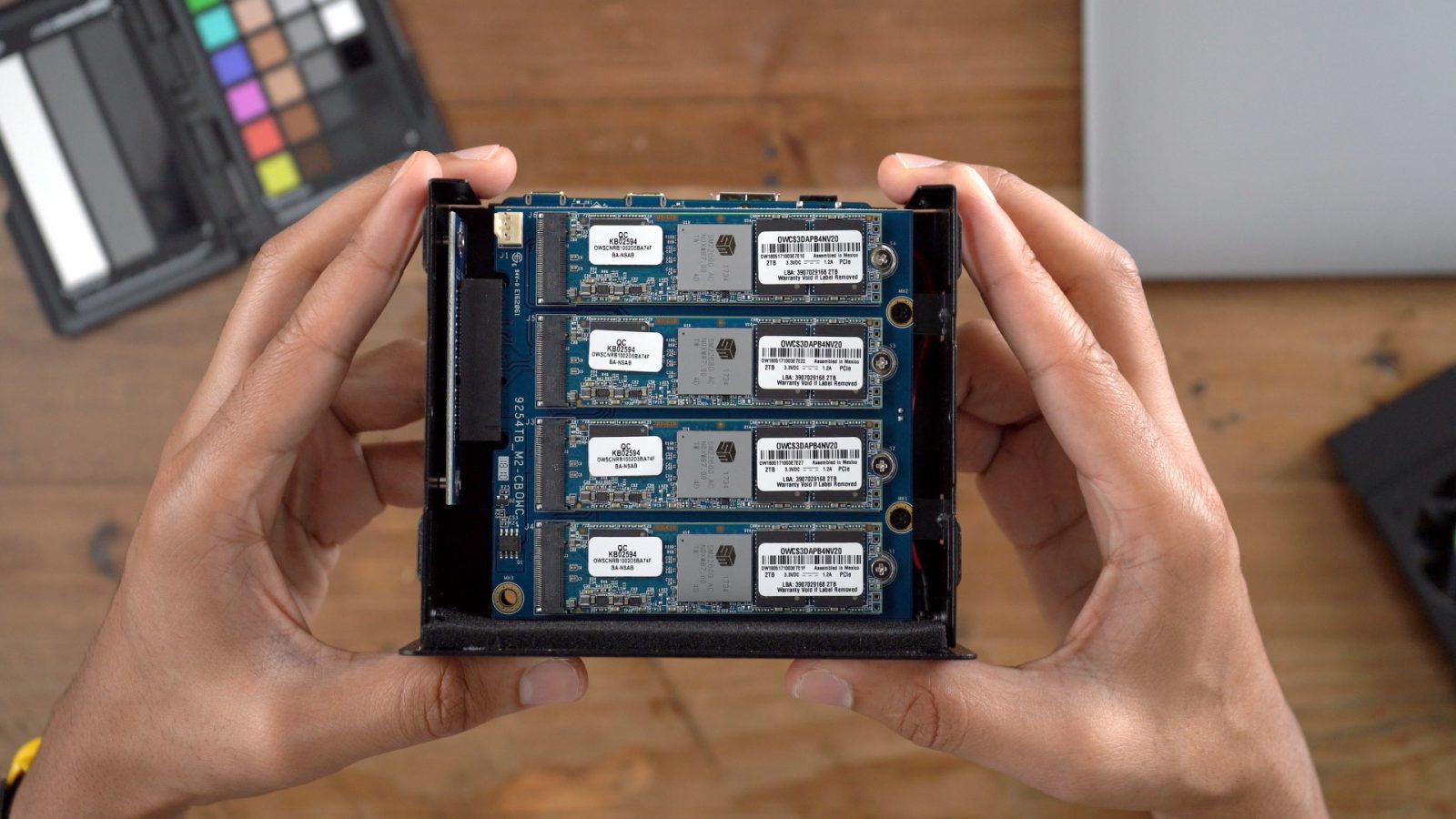 The OWC Express 4M2 is a Thunderbolt 3 enclosure that can accommodate up to four M.2 NVMe SSDs simultaneously for up to 8TB of storage. It features a compact design and dual Thunderbolt 3 ports for daisy chain setups along with DisplayPort for connecting to an external display.

OWC says that speeds for the 4M2 can reach up to 2800 MB/s read. To reach those speeds, you’ll need four fast drives configured with RAID 0 using the included SoftRAID software.

The 4M2, with its massive 8TB capacity and fast speeds is particularly apt for video editing workflows. But the enclosure, which costs $349 without any drives inside, requires a considerable investment to get the most out of it. Should you consider OWC’s chassis if you need the throughput speed and storage space? Watch our video walkthrough inside for the details.

My first impression of the OWC Express 4M2 is that it’s really small. After reviewing products with four 2.5- or 3.5-inch drive bays, I’m used to seeing larger storage enclosures like the CalDigit T4 or the Akitio Thunder3 Quad X. Like those enclosures, the OWC Express 4M2 comes equipped with four drive bays, but the difference is the drive “bays” are super-tiny M.2 slots.

The unit sports a black exterior with perforated holes on the front panel to help facilitate air flow. Feet on the side and on the bottom of the unit allow it to rest horizontally or vertically depending on your preference.

I recommend keeping the 4M2 resting in its horizontal position, because this causes the fan to face downward, helping to suppress some of its fan noise. It’s not that the fan is obnoxiously loud either way, but it’s definitely noticeable in a quiet room, and even more so when the enclosure is sitting in a vertical position.

M.2 drives generate a lot of heat, and thus fans are a requirement and can’t be disabled. OWC says its gone through a lot of testing to ensure that the fan is well matched with the enclosure to help manage heat, and doesn’t support replacing the fan with what some may deem as quieter third-party solutions.

Keep in mind that the OWC Express 4M2 is just an enclosure, and you’ll need to add one or more M.2 drives to the internal bays in order to use it. Installing M.2 drives inside the enclosure is a fairly straightforward process. Simply remove a couple of thumb screws, remove the cover, disconnect the fan, and install the modules. Once the M.2 drives are installed, just reconfigure everything in reverse.

If you’re looking to get the best performance out of the 4M2, then you’ll need to invest in four fast M.2 NVMe drive modules, and be willing to configure all four modules in a RAID 0 configuration using the included SoftRAID software.

OWC would be happy to sell you its own M.2 drives, but there are also other options from companies like Samsung. While they’re slowly coming down in price, high-end M.2 SSDs are still very expensive. A single 2TB module can easily be found north of $1000, so you can probably do the math on how utterly expensive it would be to equip the OWC Express 4M2 with high-end drives to meet the maximum 8TB capacity.

To aid my testing, OWC included four of its own 2TB OWC Mercury M.2 drives. These drives cost about $900 a piece, which means that four of them plus the $349 enclosure will run you just south of $4000 before tax.

Obviously such a setup will be price prohibitive for many users, but the investment can be worth it if you’re in the line of work that not only requires speed, but a large amount of fast storage as well. You’re not going to find a standalone 8TB external SSD on the market just yet, so if you’re working with extremely large 4K, 6K, or 8K uncompressed media, the OWC Express 4M2 coupled with four M.2 SSDs may prove to be an ideal setup for something like an iMac Pro or MacBook Pro.

Also, consider for a second that a RAID enclosure like the Promise Pegasus R4 with four 2TB SATA III SSDs costs about $4,699.00, and you start to see that an 8TB OWC Express 4M2 configuration isn’t so crazy after all. That’s not to say that you shouldn’t consider the Promise Pegasus if you need access to big pools of local storage. I’ll have a follow-up analysis of the Promise Pegasus R6 to detail the benefits of that product in the near future.

When setting up the 4M2, OWC recommends using its SoftRAID utility for the best overall performance. SoftRAID is a software-based RAID solution specifically developed for OWC hardware like the 4M2. The company notes that unlike hardware-only solutions, SoftRAID allows for better performance, multi-enclosure capability, advanced drive monitoring, e-notifications and downloadable updates.

Configuring the enclosure with SoftRAID is a simple exercise that requires just a few clicks to get started. Once configured, you can use the SoftRAID monitoring tools to keep an eye on the performance of the array. Even when using SoftRAID to configure the array on one computer, you can easily connect to a second computer and begin using the drive without installing the SoftRAID application.

Below you’ll find a chart outlining the read and write results from several speed tests using my iMac Pro. As I normally do, I used Blackmagic Disk Speed Test, AJA, and QuickBench for testing.

The results showcase a drive that’s extremely fast for both read and write, and will have plenty of headroom to handle uncompressed high resolution video workflows with ease. It’s not the fastest drive array that I’ve ever tested, but the speed, amount of storage, and form factor are all qualities that make the 4M2 stand out.

Above is another test using iostat on the Mac terminal. This command allows you to monitor TPS and MB/s for a specific drive. This measures how often a selected drive can perform I/O tasks, and the speed at which they do. I used this command in conjunction with a simple 54GB file transfer between my Mac and the OWC Express 4M2. I then performed the same test with the recently-reviewed Samsung X5 Portable SSD.

The Samsung X5 is extremely fast, but the above test results show how the OWC Express 4M2 excels at maintaining a consistently fast speed over a long file transfer period. As you can see from the data points above, this particularly applies when writing data to the drive. The Samsung X5 throttles down when writing after about 13 seconds, and stays there for the remainder of the transfer, while the OWC Express 4M2 keeps trucking along. Depending on your workflow, this could have a significant impact on performance.

We live in a world where very fast external storage is not uncommon. Samsung’s recently-launched X5 SSD, for instance, puts up better numbers in some situations, but worse performance in others. If you’re looking for a drive that’s consistently fast, and you need tons of storage to boot, you might consider decking out an enclosure like the OWC Express 4M2 with fast M.2 media. However, most users engaging in 1080p and 4K workflows won’t require this type of throughput or storage amount for their working drive. Those users would be served just as well by less expensive options.

In other words, the OWC Express 4M2 is the type of enclosure built to meet the specific needs of someone working with lots of heavy data. If that describes your workflow, then it may prove to be a worthwhile investment.

What are your thoughts? Please share you comments down below.