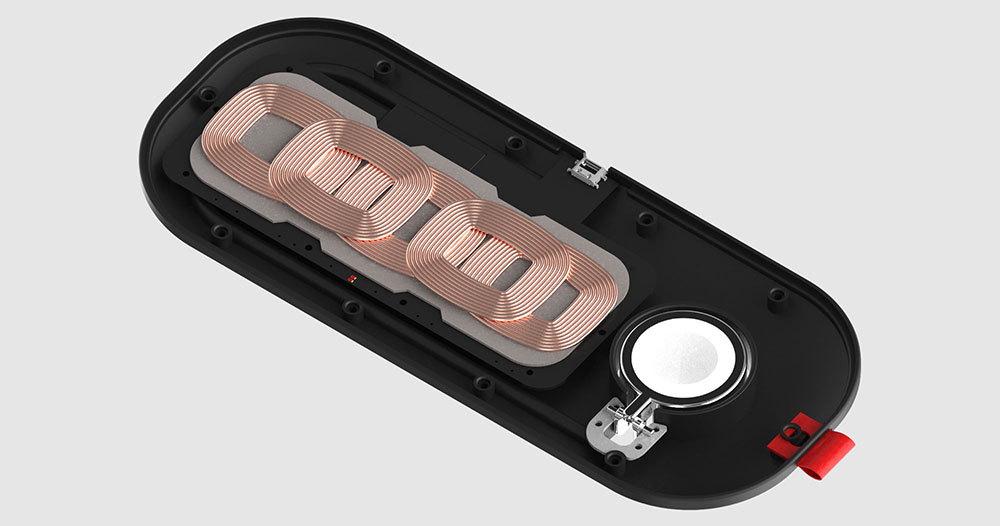 It’s now almost a year-and-a-half since Apple first teased AirPower, a multi-coil charger that lets you place your iPhone, Apple Watch or (as yet also fictitious) wireless AirPods case anywhere on the charging mat. We’re still no closer to knowing when it will actually be available.

Hard Cider Labs created a kind of poor man’s version last year, in the form of SliceCharge. That one didn’t have AirPower’s USP – overlapping coils that let you put your phone anywhere on the mat – but the new version does …

I got a chance to try a prototype version which is very close to the production model.

The overall appearance of the SliceCharge Pro is very similar to that of the previous model. It’s a flat, fabric-covered oval shape with more flattened ends than last time.

One immediately visible difference is the Apple Watch charger. The company picked up on a criticism I made last time – that you can’t use it to charge Watches with some types of band, as it’s impossible to lay them flat.

So this time, there’s a flip-up charging puck for the Watch. This is a third-party one, but is MFi certified.

As before, the fabric top and non-slip plastic bottom hide an aluminum chassis. You get a power brick and USB-C cable.

It measures a little over 9 inches by 3 inches by half an inch thick.

SliceCharge Pro has six coils – one in the Apple Watch charging puck, and five overlapping ones in the main section of the mat.

The charger can provide up to 30W total power, with a maximum of 10W to any one device (though Apple limits iPhones to 7.5W).

It’s still not quite AirPower

AirPower promises you can put any device down anywhere on the mat. You can’t quite do that here: the Watch has to be on the right-hand side, and your iPhone(s) go anywhere else.

The issue, and likely the difficulty Apple has with AirPower, is that standard wireless charging coils are too large to charge the Watch – while Watch coils are too small to charge an iPhone. The only way around that is to have overlapping coils of both standard and Watch size, which creates interference issues. Hard Cider Labs hasn’t attempted this, likely figuring that if even Apple hasn’t done it yet, it’s best left alone.

But it’s still better than other options out there right now. There are multi-coil chargers, which won’t charge the Watch. And there are dual-chargers that charge an iPhone and a Watch, but with both in fixed positions. The SliceCharge Pro combines dual-device charging with flexible positioning of the phone. 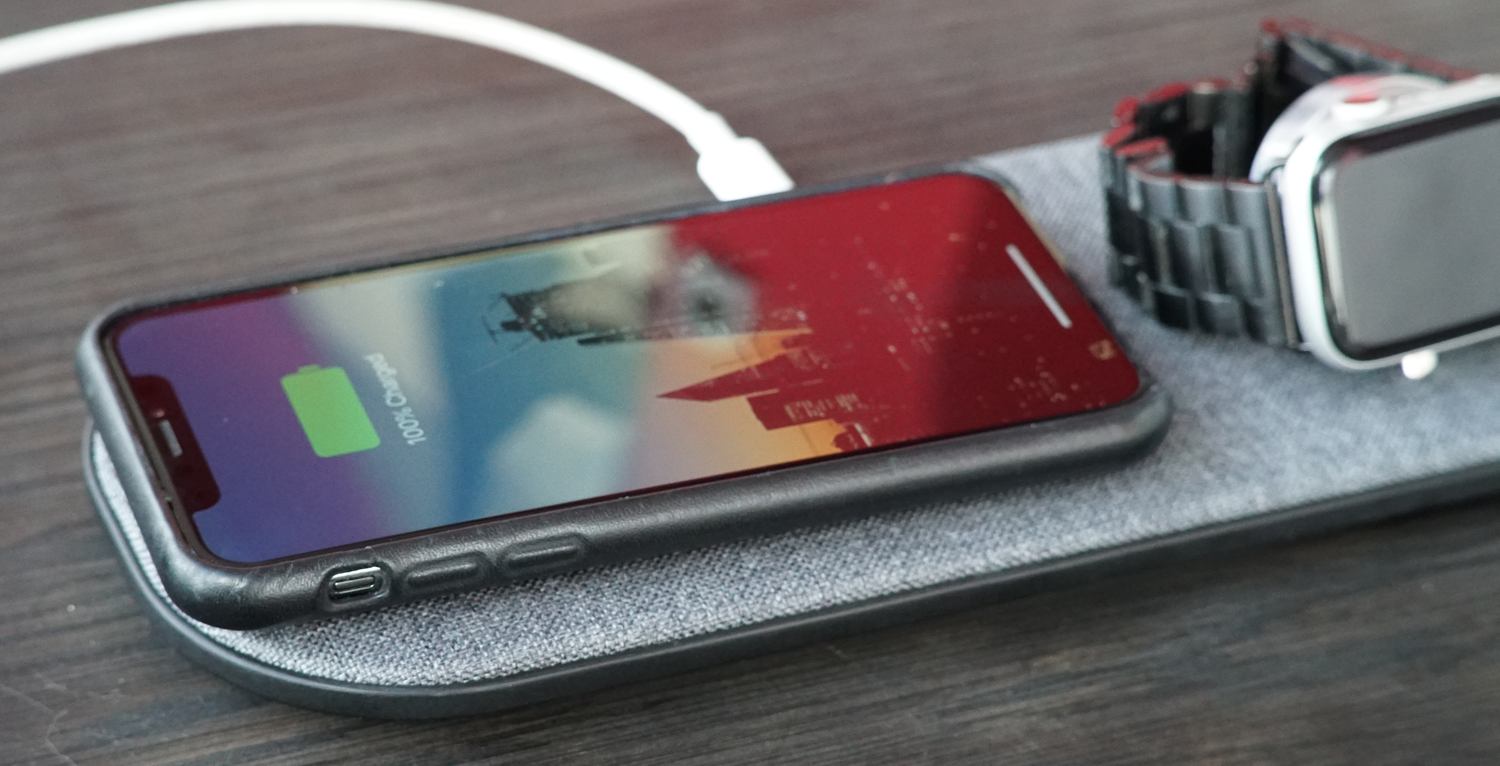 I’ve been using the charger for a few days, and it has worked flawlessly. I’ve positioned my iPhone X in as many different positions and angles as I can come up with, and so long as it’s mostly on the mat, it charges perfectly.

I mean, there are positions where it won’t charge – like half on and half off – but I had to actively try for these. Anywhere you are likely to casually place your phone, it charges. 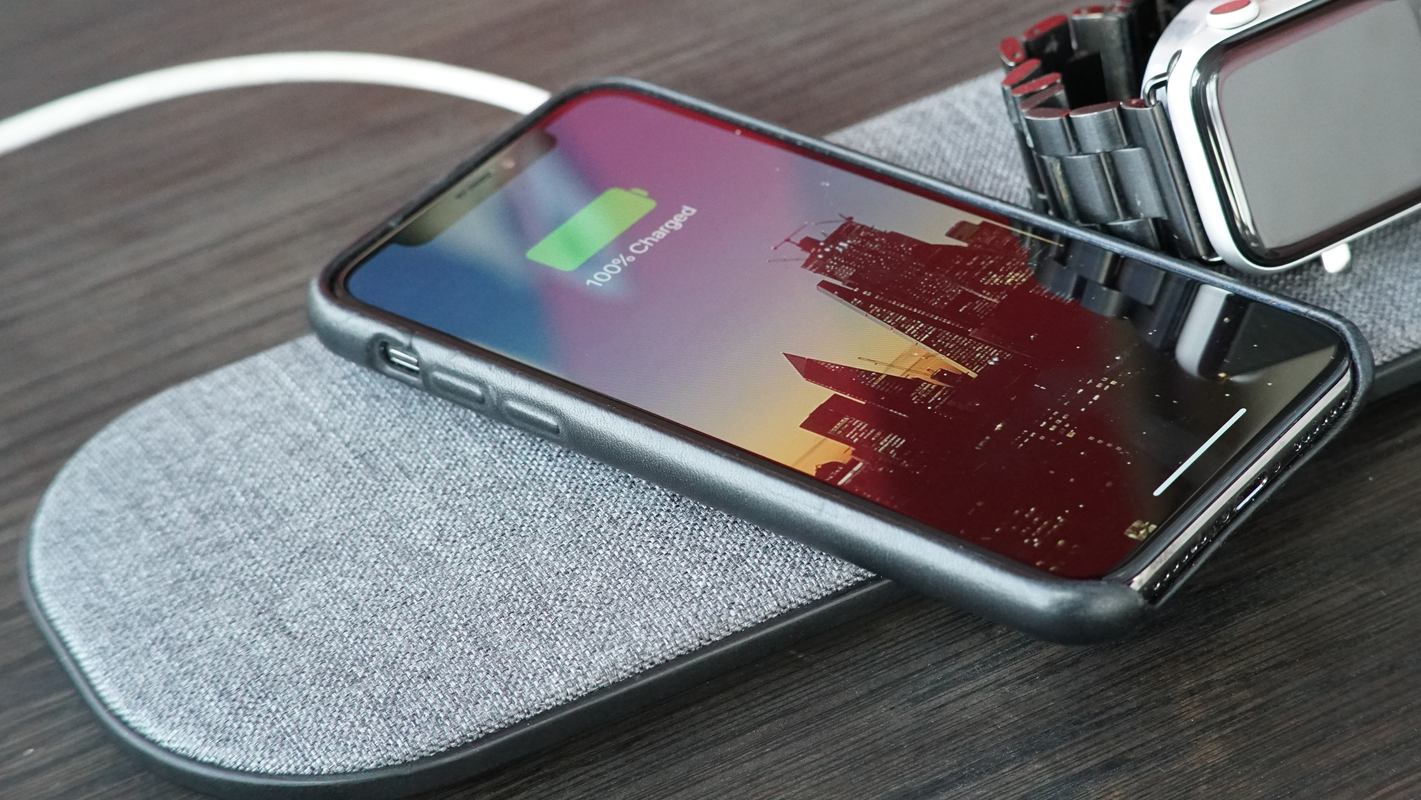 The observation Zac made last year – that no-one has yet produced an AirPower clone – remains true. But this is certainly very close.

I mentioned in a MacBook Pro Diary piece that I use my Mac as my charging hub when travelling. It has enough power to charge all my devices.

I decided to test this with the SliceCharge Pro. Does the mat get enough power from the MBP to charge both my iPhone and Watch simultaneously? The good news is the answer is yes. So this, to me, makes a really nice travel option. I can just slip the mat itself, minus the power brick, into my carry-on bag.

One really nice touch: if you bought the original SliceCharge, the company will send you the Pro model free of charge – you just pay $10 for shipping.

Hard Cider Labs plans to retail the SliceCharge Pro for $129, but the Kickstarter Early Bird price is $69. Delivery is scheduled for May.

The problem, of course, is you’re being invited to make a double gamble here. First, the usual Kickstarter one: will the company deliver, and will it deliver on time? I’d say that’s a fairly good bet. The company has its track-record from the previous model, and I’ve actually tried the new one and it works. This is not some vaporware promise.

But the second gamble is around the timing of AirPower itself. You could back the SliceCharge now only to have Apple beat it to market.

However, even if that does happen, you’re not going to be able to buy AirPower for $69 – and probably not for $129 either. Is the Apple premium, whatever it turns out to be, going to be worth it for the sole benefit of full flexibility in positioning over ‘put your Watch on the puck and slap your iPhone down anywhere else’? Only you can answer that.

SliceCharge Pro can be backed on Kickstarter, with Early Bird pricing at around $69.