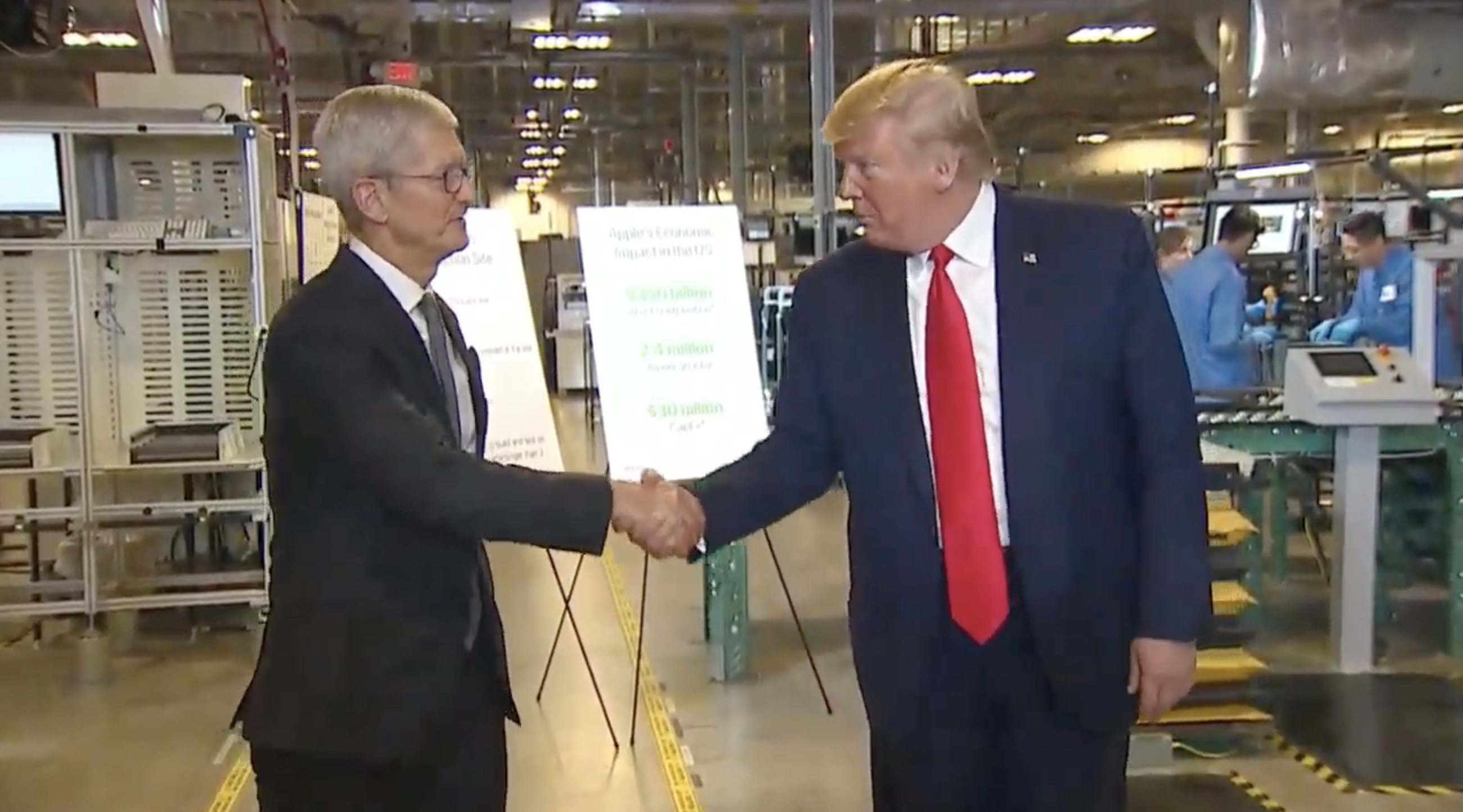 As expected, Apple CEO Tim Cook traveled to Austin, Texas, today to visit Apple’s facilities where it has been assembling the Mac Pro since 2013. Cook was joined on the visit by President Donald Trump, Ivanka Trump, and other members of the Trump Administration.


Prior to his visit to the Mac Pro facilities, Cook took the time to visit Apple’s retail store at the Domain NORTHSIDE outdoor mall in Austin. Cook then headed to Apple’s Flextronics plant, where the Mac Pro has been assembled since 2013. Cook and Trump toured the facilities together, and Trump was presented with a Mac Pro plate to thank him for visiting.

After the tour, Cook and Trump held a small press conference, and Cook thanked the president and his administration for their work in “getting us this far” and said it “would not be possible without them.” The Apple CEO said:

I’d like to thank everybody for coming and joining us. I’d particularly like to thank President Trump, Secretary Mnuchin, and Ivanka and the other members of the administration. I’m grateful for their support in pulling today off and getting us this far. It would not be possible without them. What you’re seeing here, the Mac Pro, is 15,000 times more powerful than the original Mac, and it can perform 56 trillion tasks per second. It’s absolutely blow away. We could not be more proud of the product. It’s an example of American design, American manufacturing, and American engineering.

Apple announced this morning that it has also broken ground on its new $1 billion campus in Austin. The campus will be 3 million square feet in size and initially home 5,000 employees with the capacity to grow to 15,000 employees. This new campus is expected to open in 2022.

Cook commented on that new campus during his visit with Trump today:

This morning, we also announced a $1 billion investment groundbreaking. We view Austin as a very key place for the future of our company. It’s the second largest site in the world for us next to our home base in Cupertino. I’m hoping for more investments to come.

Finally, with a little nudge from Trump, Cook said that he believes the American economy is “the strongest in the world right now.”

Trump: Tim was saying that he’s starting this massive new development also in Texas. But he also said something to me about the American economy, because he’s all over the world. I would say there’s nobody that’s more over the world than Apple. What would you say about our economy compared to everyone else?

Cook: I think we have the strongest economy in the world right now.

After remarks from Cook, Trump took questions from members of the press. With Cook standing just a few feet away, Trump proceeded to criticize the ongoing impeachment proceedings, refer to publications including the Washington Post, the New York Times, and ABC as “phony” and “fake press,” and more.

Trump also said that he is “looking at” exempting Apple from next month’s round of China tariffs. “We have to treat Apple on a somewhat similar basis as we treat Samsung,” the president said.

Prior to and during the visit this afternoon, there were protests near Apple’s Austin headquarters — including people protesting Apple as well as Trump. Alex Jones was there to protest Apple and Cook specifically. Jones has been a vocal critic of Apple since the company removed Infowars shows from Apple Podcasts and permanently banned the Infowars app from the App Store.

Alex Jones, riding in an armored vehicle, is protesting Apple in front of the factory here in Austin where President Trump will soon arrive. pic.twitter.com/o8ud5LoqiF

What’s important to note is that the facilities toured by Cook and Trump today have been used for Mac production since 2013. The announcement made today simply coincided with the visit, and there is nothing new about the facilities that the two toured.

To watch the Q&A session that occurred at Apple’s Austin plant today, skip to the 2 hour and 4 minute mark in the below video.

Google Has Already Discontinued The Pixel 4 and Pixel 4 XL...

This Polk Audio Command Soundbar Is $100 Off, Making It Just...

Microsoft ends tests with xCloud gaming platform on iOS due to...