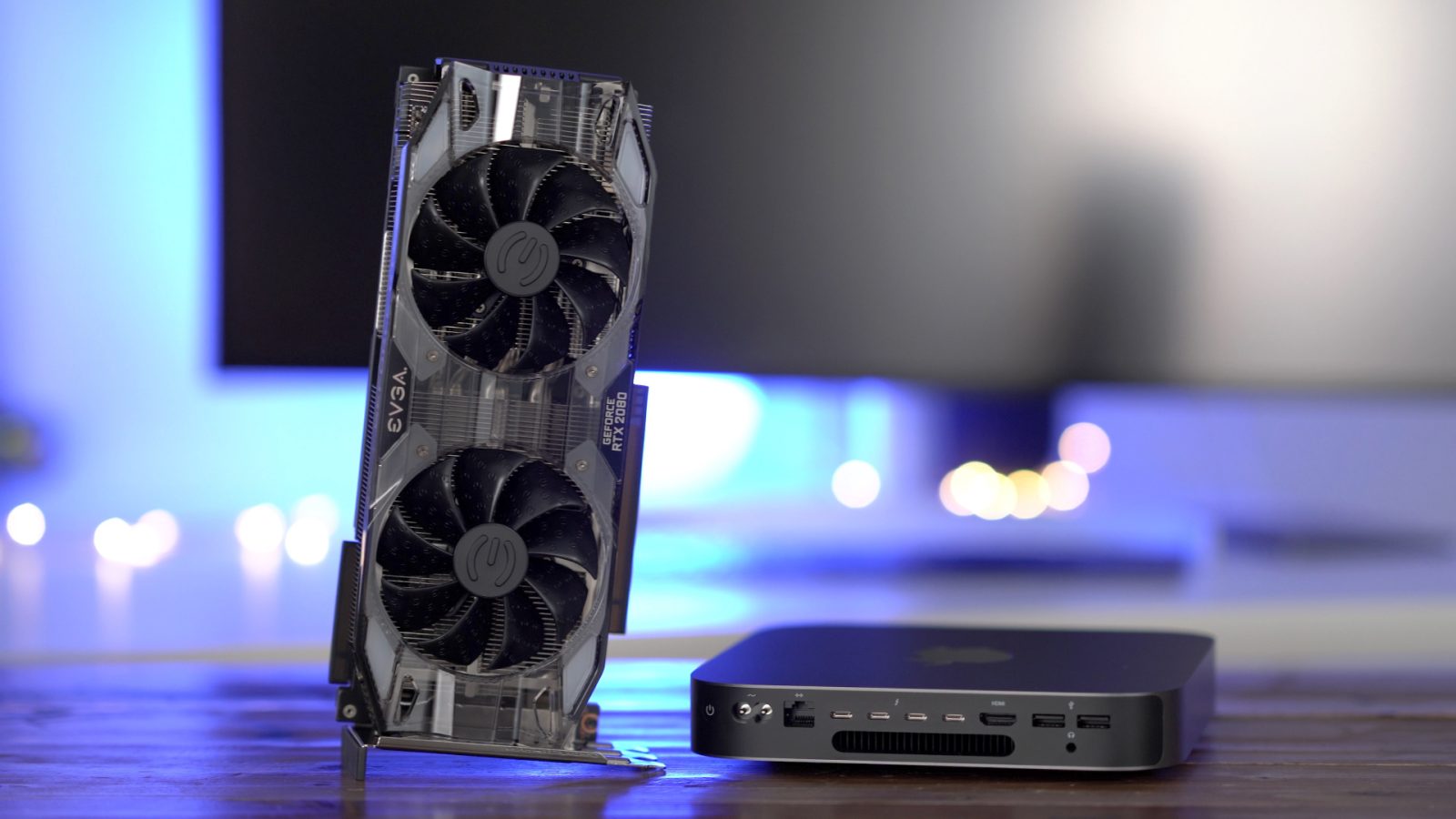 In a previous video, I showcased a 2018 Mac mini gaming setup using an AMD RX Vega 64 eGPU running Windows 10 via Boot Camp. Would a similar setup work for an Nvidia GeForce RTX 2080 GPU from EVGA? Watch our hands-on video walkthrough for the answer.

I’ll preface this post by saying that Apple doesn’t officially support eGPUs in Windows via Boot Camp. While that’s definitely the case for Apple’s laptops, I’ve found that the AMD RX Vega 64 GPU works quite well in Windows running on the 2018 Mac mini. With this in mind, I saw no reason why a modern Nvidia card, like the RTX 2080, shouldn’t work in Windows on Apple’s latest Mac mini.

Keep in mind that there are no Nvidia Web Drivers for macOS Mojave 10.14, and as such, you cannot run Nvidia-based eGPUs on Macs running Mojave.

There are five main pieces of hardware that I utilized for this setup:

As you may have concluded, this is quite the expensive setup, but it’s more of a proof of concept than anything else. You can, of course, use cheaper components if you wish to do so.

I’d like to thank the fine folks over at EVGA for loaning me a GeForce RTX 2080 for using in this test.

Install the RTX 2080 GPU inside the Razer Core X

The first step is to install the RTX 2080 GPU inside of the graphics chassis. I selected the Razer Core X, because it’s the only eGPU chassis I own that’s wide enough to fit the three-slot-wide EVGA RTX 2080.

Neither the Sonnet eGFX Breakaway Box 650 nor the Akitio Node Pro allow the RTX 2080 to fit inside. Even the Razer Core X makes for a snug and somewhat uncomfortable fit, as it’s clearly designed for two-slot-wide cards, but it is forgiving enough to accommodate EVGA’s card.

Since macOS Mojave is not compatible with Nvidia GPUs, and no version of macOS works with the RTX 2080, you’ll need to bypass the Nvidia eGPU setup whenever running macOS.

Windows should detect the eGPU, and begin installing drivers. Check Windows Update and Device Manager for the status of the driver install. Once the installation is complete, you’ll be prompted to restart your Mac mini. Instead of restarting, shut down your Mac mini.

Boot the Mac mini, and if you see the Windows desktop, you’re in business. If you have issues reaching the desktop, verify your display’s input setting, the DisplayPort cable, etc. Remember, macOS is not compatible with Nvidia GPUs, so if your machine boots into macOS, you’ll be unable to see your Mac login screen until you direct connect via HDMI.

Visit Nvidia’s website, and download the needed GeForce drivers for your RTX 2080. Navigate through the driver software and ensure that the drivers install successfully.

Once the driver installer is finished, you’ll be prompted to reboot your machine.

If you’d like to verify that everything is installed correctly, you can visit Device Manager and check under Display Adapters. You should see the Nvidia RTX 2080 GPU listed there devoid of any exclamation points or question marks.

The install process is easy enough, but is the performance improved enough to move current Mac mini owners to consider such a setup? The Unigine Heaven and Valley benchmarks paint an encouraging picture.

Even when running these benchmarks at Ultra settings at 3440×1440, performance was good. Remember, this is a 2018 Mac mini, which contains a severely anemic and underwhelming integrated GPU. The RTX 2080 turns the Mac mini into a different class of machine with a single Thunderbolt 3 cable.

Although Rocket League is not known as a title that pushes hardware, I was nonetheless impressed by being able to run it smoothly at the LG UltraWide 5K2K’s native 5120×2160 resolution at the highest settings. The result was an immersive widescreen gameplay experience devoid of slowdown, even with lots of action occurring on screen.

Other games I played included more demanding titles like Forza Horizon 4. With that title, I was able to run it using Ultra settings at 3440×1440 resolution. Frame rate averaged around a very playable 54 FPS.

Project Cars 2, a much more demanding title, began to show the limitations of such a setup when running at higher resolutions. At 3440×1440 I averaged around 50 fps at high settings. Introducing weather effects like rain further dampened the experience, so it’s probably beneficial to drop the resolution to help stabilize performance.

Unsurprisingly, I had the most trouble while playing Ark. It’s playable, but it wasn’t a great experience. This probably had a lot to do with my impatience and lack of testing various quality configurations, though I’ve heard that Ark can be hard on dedicated gaming machines as well.

If you’re serious about Windows gaming on your Mac mini, I recommend investing in an Xbox Wireless Controller. Connecting the controller is an effortless affair, and it’s a great way to garner that console-like experience.

My 2018 Mac mini features a paltry amount of on-board storage, so I connected the G-Drive 1TB Thunderbolt 3 SSD for game installations. This provides me with external storage that’s even faster than the built-in SSD found inside my 2018 Mac mini.

Although I definitely wouldn’t recommend buying a Mac mini solely as a gaming computer, I think it makes for a very capable machine should you wish to go that route. If you already own a Mac mini to run macOS, it’s good to know that you have hardware that is capable of so much more if needed.

You don’t have to opt for the latest and greatest eGPU setup, either. You can go with a less expensive chassis + GPU combination and still create a capable Windows gaming machine. Or, if macOS compatibility is a must, you can always go the AMD eGPU route, which lets you use enhanced graphics on both macOS and Windows.

Setups like this continue to emphasize how versatile of a machine the 2018 Mac mini is. The introduction of Thunderbolt 3 I/O totally changes the makeup and overall capabilities of Apple’s smallest and most affordable Mac computer.

What do you think?