The wearable market is continually growing each year with new smartwatches, headphones, and fitness trackers. Today, IDC has posted an update on wearable market share, detailing huge growth from the likes of Samsung and Huawei thanks to products such as the Watch GT and Galaxy Buds that still sit behind Apple on the whole.

Today’s report mirrors some numbers that have been released recently on the smartwatch market specifically, as Huawei continues to grow in huge ways. Thanks to the company’s affordable Huawei Watch GT, the company saw a year-over-year increase of 213% in wrist-worn wearable market share specifically, and 282% on wearables overall.

IDC attributes that gain in market share to the fact that Huawei bundles the Watch GT with its smartphones in many cases, helping to achieve the 5 million shipments in Q1 of 2019 alone. Of course, this presents the obvious question of what lies in store for the company’s future. With a US blacklist having huge effects on Huawei’s smartphones, it’s unclear what will happen going forward.

Samsung, on the other hand, isn’t in that situation. In the overall wearable market share, IDC reports that Samsung saw growth of 151% since Q1 of 2018. The 4.3 million units shipped leave it well behind Apple and Xiaomi, but bundles for the Galaxy Buds and Galaxy Watch models are undoubtedly helping boost these numbers. In terms of wrist-worn wearable market share alone, Samsung saw 92% growth.

Meanwhile, Apple and Xiaomi remain the kings of the wearable market. Despite Apple only seeing roughly 15% growth in wrist-worn wearables, it saw a 49.5% jump in the category overall undoubtedly thanks to the ongoing success of AirPods.

IDC notes that thanks to AirPods with Wireless Charging, the average selling price ASP has jumped too. People are also spending more on the Apple Watch with the ASP going from $426 to $455. At the same time, Xiaomi’s affordable Mi Band continues to see huge success as it expands in markets.

Wear OS is somewhere in that number, but clearly, it’s not making much of an impact. A previous report showed Fossil, the biggest Wear OS maker, losing market share in this time period. 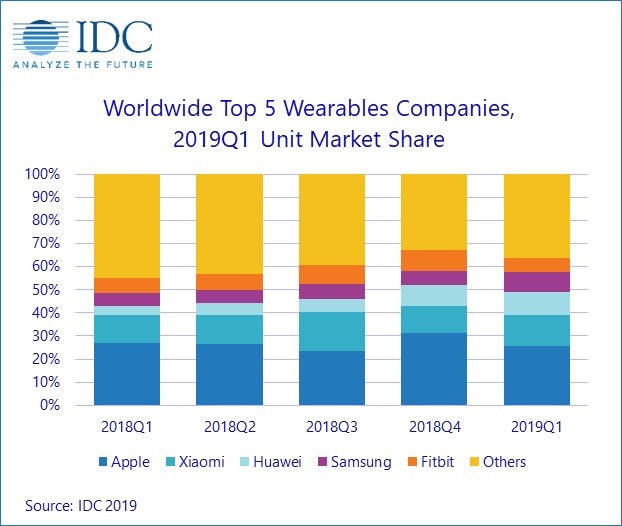