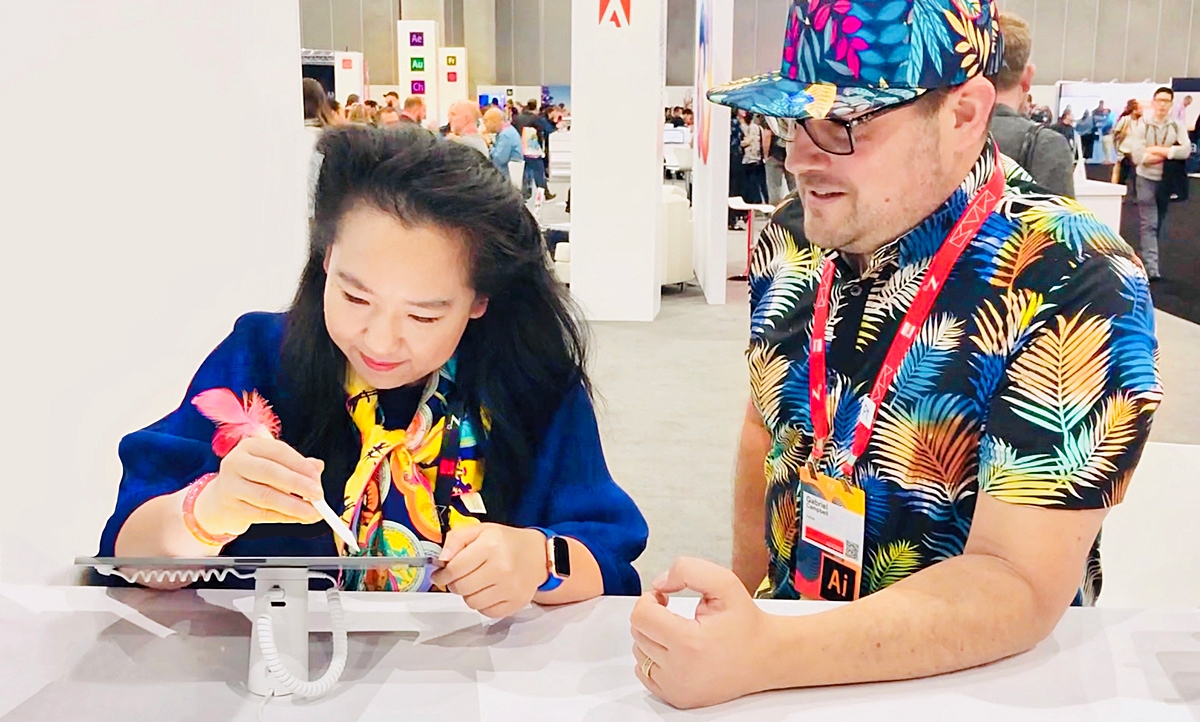 Adobe Illustrator on iPad is now available to pre-order on the App Store. The teams at Adobe and a select group of artists have been busy refining the app’s tools and user experience since it was previewed in November 2019 at Adobe MAX. I asked one of those artists, Yiying Lu, about her experience with Illustrator on iPad so far and how it will shape the future of creativity.

Last year, Yiying Lu presented a Today at Apple Design Lab at Apple Union Square in San Francisco, where she inspired audiences to bridge art and technology through cross-cultural creativity. As designer of the famous Twitter “Fail Whale” and emojis like dumpling 🥟, chopsticks 🥢, fortune cookie 🥠, takeout box 🥡, and the upcoming boba, Yiying carries the same message of unifying design through all her work. That’s why she’s excited to see what artists will make with Illustrator on iPad.

“Art and illustration have always been my favorite means to experience the world,” Yiying says. “Drawing is an activity to rediscover the essence and reflect the meanings of the subject that we are portraying. Often, creating art and illustration allows me to be completely present, without a sense of time, place, or even self.”

Yiying’s journey has taken her from Shanghai to Sydney to San Francisco, joining venture capital fund and accelerator 500 Startups as a creative director in 2015. Nearly 20 years ago, she added Photoshop and Illustrator to her traveling toolkit. The opportunity to beta test Illustrator on iPad came in August 2019.

“What surprised me most is how intuitive it is, as well as how much precision control it allows with the Apple Pencil,” Yiying says.  “It was kind of a dream come true, because I have been waiting for something like that for almost 20 years since I started using the desktop version. I have always wanted to draw directly on the screen as if it’s paper!”

Before Illustrator on iPad, Yiying’s digital illustration process was complex: sketch a design on paper, scan the drawing into a computer, import the digital file into Illustrator on the desktop, and finally trace the artwork using a mouse or Wacom tablet. Now, the workflow is as simple as picking up an Apple Pencil or importing a sketch using the iPad’s camera.

Yiying has already created several public designs using a pre-release version of Illustrator on iPad, including the logo for the United Nations’ Convention on Biological Diversity, a children’s book titled The Very Hungry Red Panda, and branding for “Wear To Care,” an initiative that promotes public health through co-creating and wearing face masks.

The intuitive design of Illustrator on iPad helped Yiying focus on the bigger picture of each campaign rather than getting bogged down by the details. She thinks the app will foster a new generation of creatives thanks to five key strengths:

While the creative community has experienced unprecedented challenges over the past year, Yiying believes that times like these are crucial for artists and designers to guide humanity’s storytelling efforts and solve grand problems. As new tools like Illustrator on iPad become available, Yiying is calling on creatives to use their talents to better our society.

“I would like to encourage artists, designers, creative professionals to focus their energy on creative responsibility: great design isn’t just about making things pretty. It is about our intention and the message we send out to the world and being part of a bigger picture for the larger ecosystem.”

You can pre-order Illustrator on iPad in the App Store here.