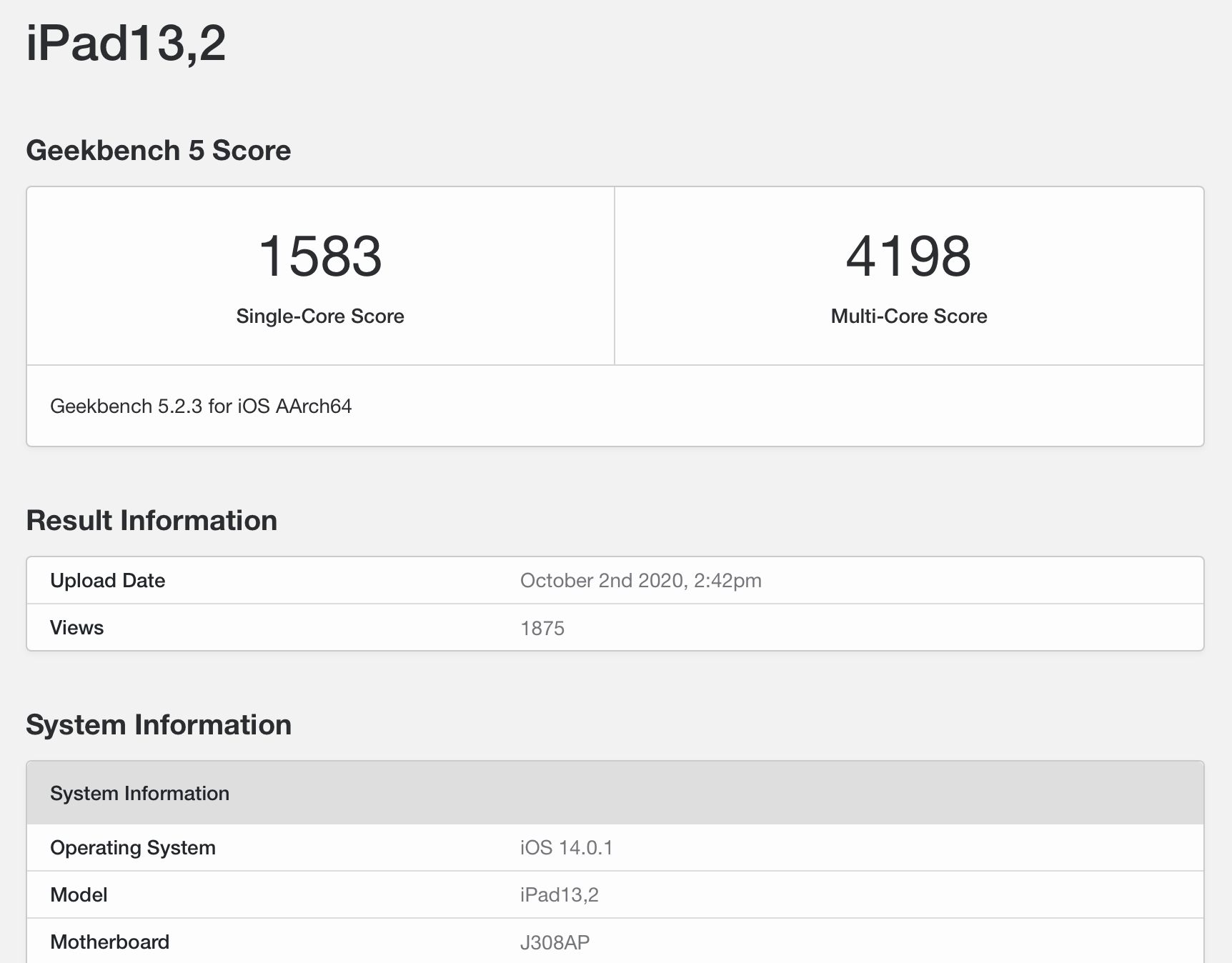 The recently announced iPad Air 4 is the first Apple device to come with the new A14 Bionic chip, which is also expected to be part of iPhone 12 and a new Apple TV. While these devices are not yet available, someone shared this week a Geekbench benchmark result for the iPad Air 4, which gives us a closer look at the performance of the A14 chip.

These numbers give us a better overview of iPhone 12’s performance compared to iPhone 11, which doesn’t seem to be a huge improvement but it keeps the iPhone as the most powerful smartphone on the market. It’s also worth mentioning that Apple might offer the iPhone 12 with a slightly different variation of the A14 chip more powerful than the one used on the iPad Air 4, as the Geekbench result shows 4GB RAM and some rumors point out that iPhone 12 will have 6GB RAM.

There’s a new iPad Air 4 benchmark available on Geekbench, this time with Metal score. The A14 chip scored 12571 in Metal score, which is related to its graphical power. This puts the new iPad Air 4 at the top of the Metal ranking, as the A12Z Bionic chip of the 2020 iPad Pro scored 11665.

Here are some comparisons:

The A14 Bionic chip has an 8% faster GPU than the one included with the A12Z Bionic chip — which was previously the most powerful available in an Apple device. When compared to the A13 chip, the A14 GPU is 72% faster, which definitely sounds promising for the next generation iPhone and even future Macs with Apple Silicon.

In a related note, the Apple leaker known as Fudge shared today on Twitter some details about Apple’s strategy to boost the Apple Arcade. According to Fudge, the company is working with developers to bring more games that compete with console level games. The leaker also mentioned that Apple has been working on new, more powerful Apple TV models with the A12Z chip and A14X chip, as well as a new game controller.

Earlier this year, 9to5Mac heard from a source that Apple is working on a new Apple TV with the A14 chip (or one of its variations) with at least 6GB RAM. Our source also told us that Apple was aiming to offer more graphics performance to compete with consoles, which has now been corroborated by Fudge. Unfortunately, a Bloomberg report claims that we might not see this new Apple TV until 2021.