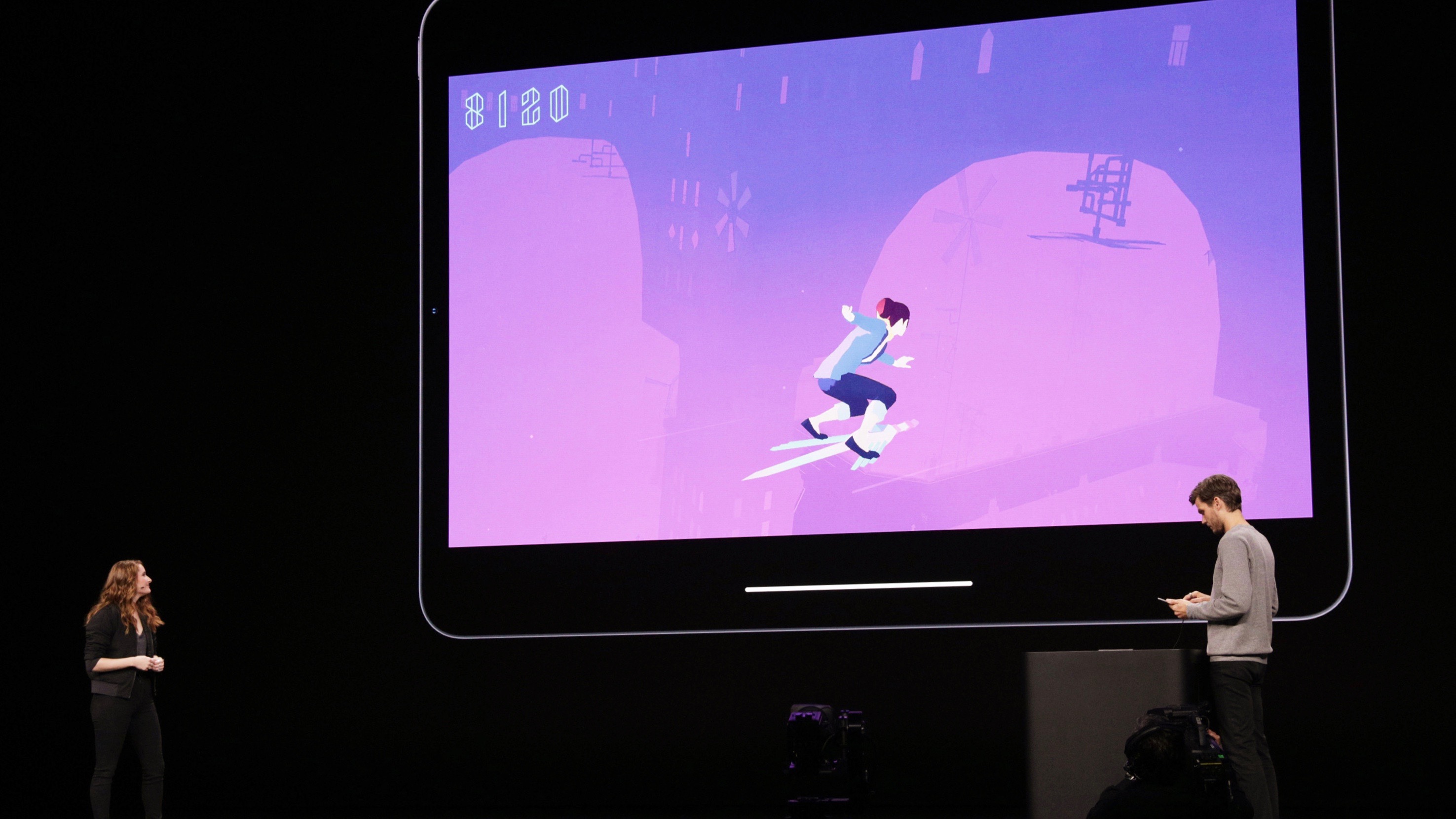 After months of speculation, Apple today officially held its “By innovation only” iPhone 11 and Apple Watch Series 5 event at Steve Jobs Theater. The event included new iPhone announcements, details on future Services, and much more.

Read on as we recap everything Apple announced today.

Apple kicked things off today by offering an update on two of its upcoming Services: Apple Arcade and Apple TV+. First off, Apple Arcade is Apple’s upcoming game subscription service offered on iOS, macOS, and tvOS.

Apple confirmed today that is launching Apple Arcade on September 19, and that the service will be priced at $4.99 per month. This includes Family Sharing access with up to six members in your family. You can try Apple Arcade with a one-month free trial.

Apple Arcade is available in the Arcade tab of the App Store on iOS 13. Apple is adding new games every month, and says it is launching with more games than any other service before it.

Meanwhile, Apple TV+ is Apple’s upcoming video streaming subscription service. Apple confirmed today that Apple TV+ will launch on November 1st for $4.99 per month. That also includes Family Sharing access, though you only get a 1-week free trial.

However, if you buy any Mac, iPhone, iPad, or Apple TV starting now – you’ll get one year free of Apple TV+. As for what content you can expect, Apple TV+ will launch with 5 original TV shows, with more being added each month. 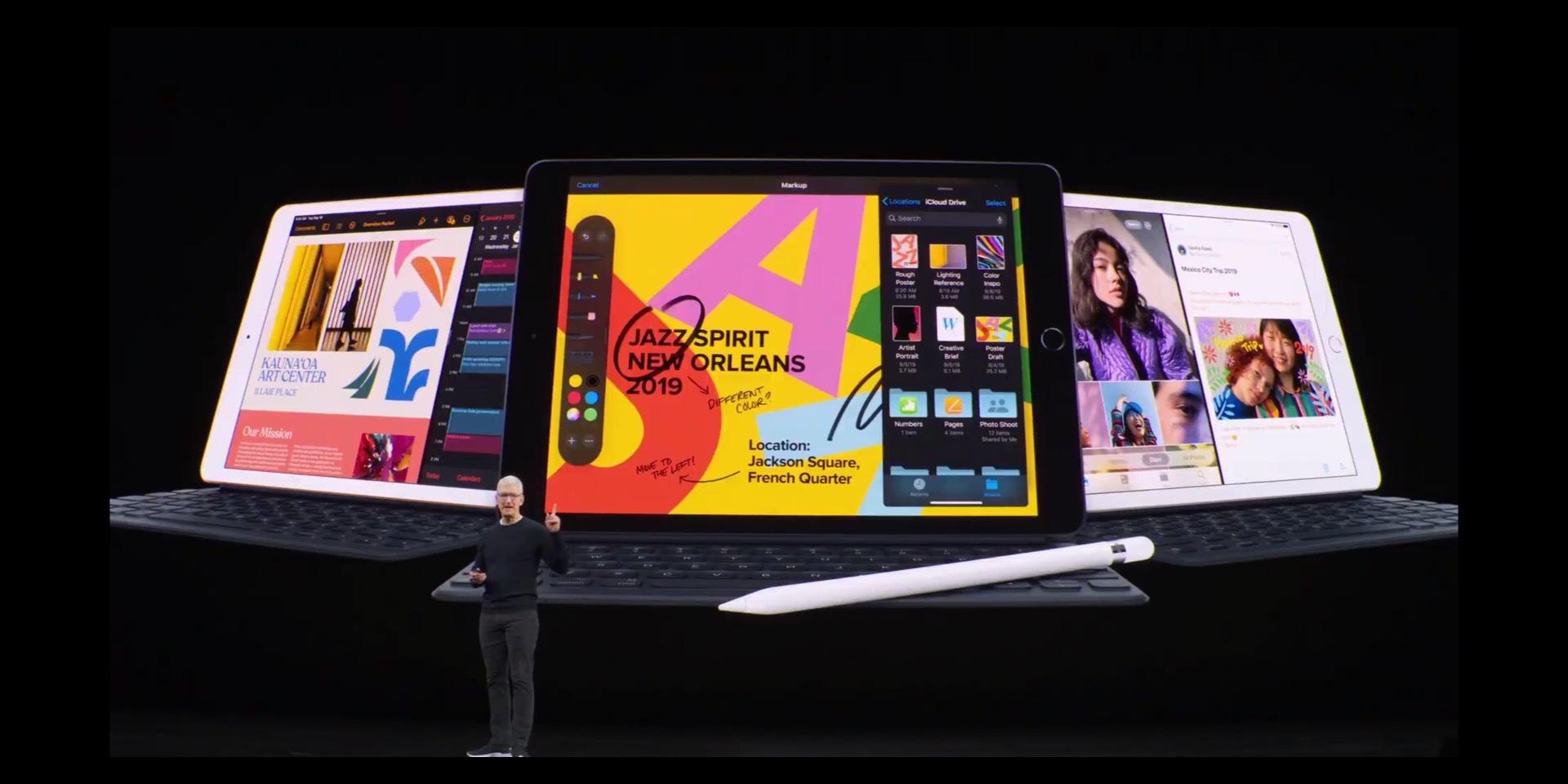 Next up during the event was the surprise announcement of a new entry-level iPad. Apple announced the successor to its 2018 9.7-inch iPad, with all-new 10.2-inch iPad.

The new entry-level iPad arrives roughly a year and a half after Apple launched the 9.7-inch iPad back in March of last year. The new iPad includes a larger display coming in at 10.2 inches. That’s just shy of the 10.5-inch screen that Apple included in the iPad Air 3 that landed six months ago.

The seventh generation iPad with 10.2-inch screen is available for preorder now starting at $329 with orders shipping out by September 30th. Education pricing starts at $299. 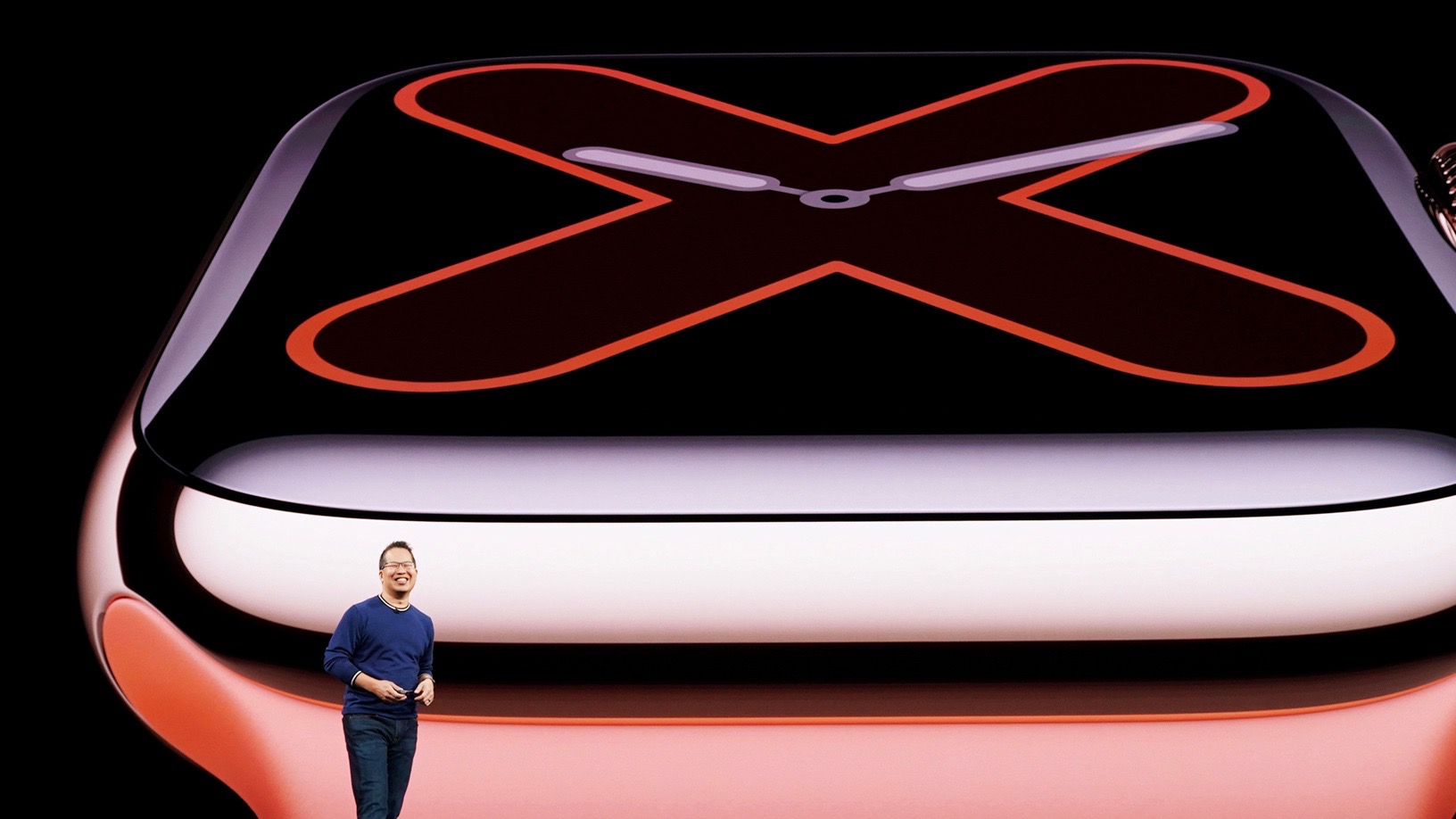 When the display is dimmed, you can see the time, as well as certain complications. Apple is accomplishing this always-on technology with a combination of new display hardware, including an ambient light sensor and deep integration with watchOS software.

Apple is also doubling down on the emergency services features of the Apple Watch. With the Series 5, users with cellular models of Apple Watch Series 5 can now complete international calls to emergency services, regardless of where the device was originally purchased or if the cellular plan has been activated.

The Apple Watch Series 5 is available in a wider range of materials, including aluminum, stainless steel, ceramic and an all-new titanium.

The Apple Watch Series 5 is available for pre-order today, with the first orders arrive on September 20th. Pricing starts at $399 for the aluminum model, and goes all the way up to $1400 for the ceramic Apple Watch Edition. 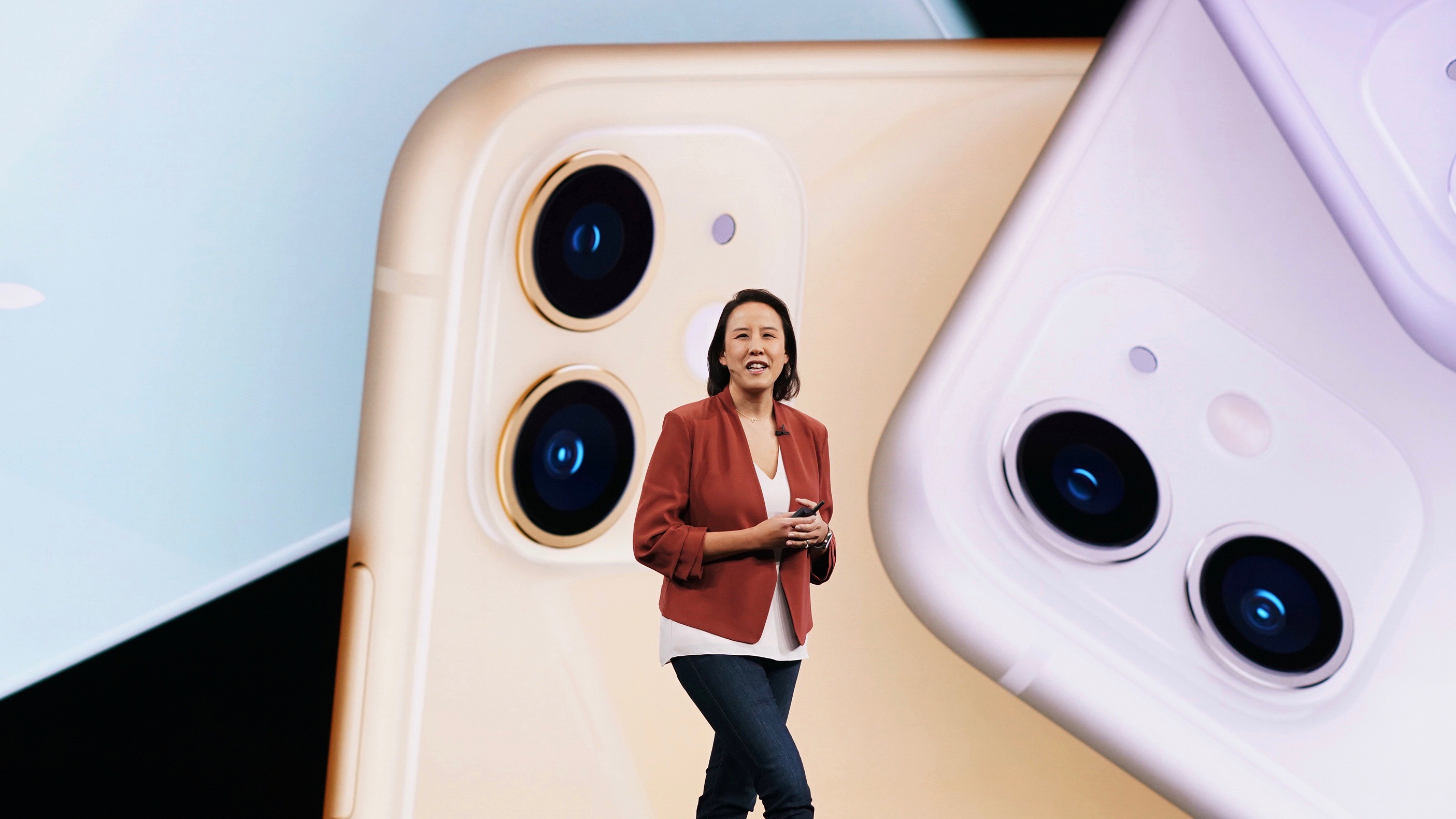 Apple then shifted its focus to the iPhone lineup, officially unveiling the iPhone 11 as the followup to the iPhone XR. As expected, the focus is primarily on the camera.

The iPhone 11 camera setup includes wide and ultra-wide lenses, rather than wide and telephoto like many people had assumed. This gives users the ability to adjust cropping and zooming in post production. There’s also a new night mode that comes on automatically, brightens photos, and reduces noise in low-light situations, as well as a next-generation Smart HDR.

QuickTake is a new video recording feature that makes it easier to take videos by long-pressing on the camera shutter button. Video is 4K quality at 60 fps, as well as slo-mo, time-lapse, and expanded dynamic range.

The front-facing iPhone 11 camera has been updated to 12 MP with wide-angle selfie support in landscape. You can also take 4K video at 60 fps, as well as slow-mo videos. 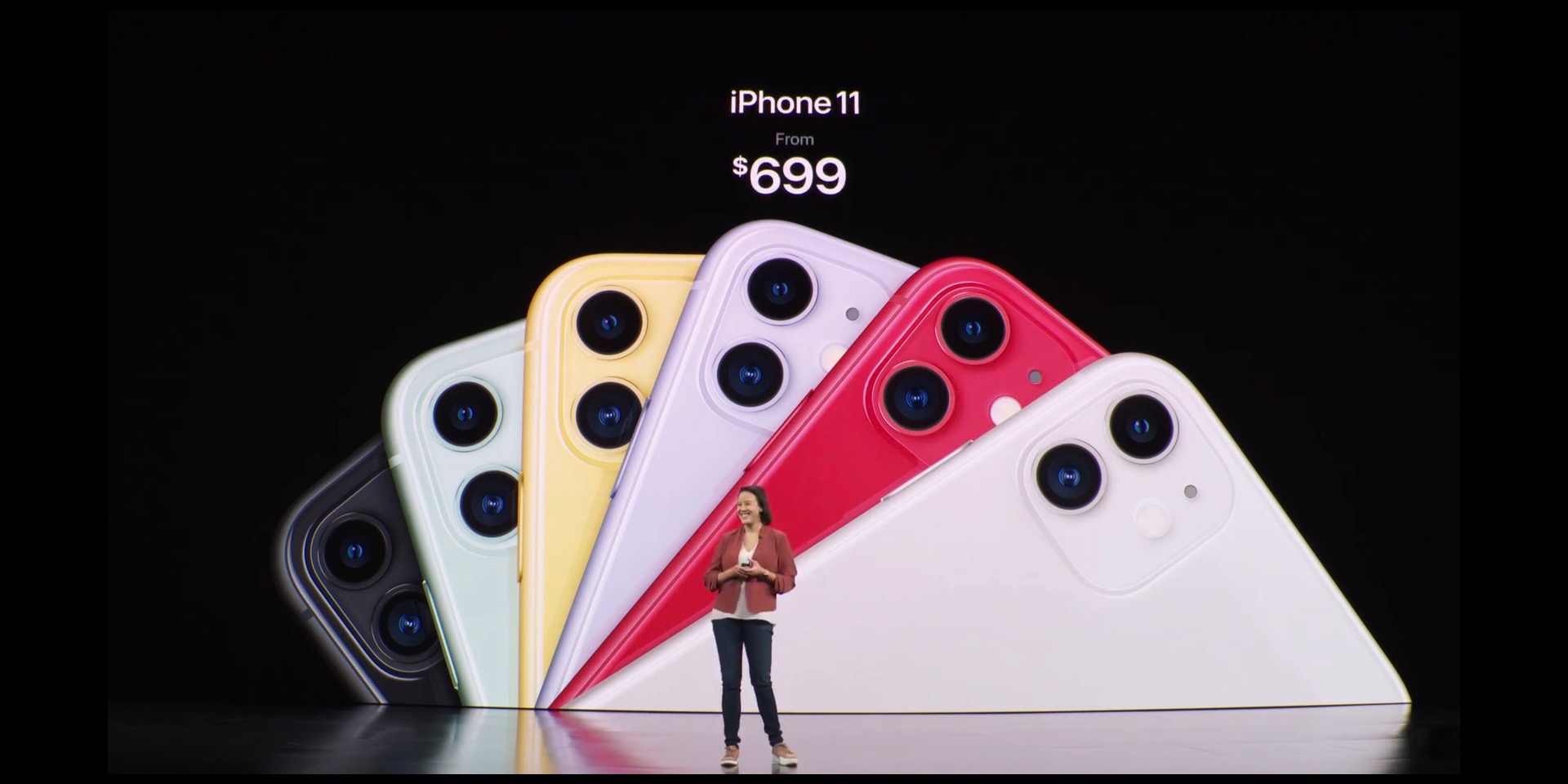 As far as colors, the iPhone 11 is available in six colors: black, white, red, purple, green, and yellow. The iPhone 11 also features a new anodized aluminum finish, which Apple says is more durable.

The iPhone 11 starts $699 for 64GB of storage, which is $50 lower than the iPhone XR. It will be available for pre-order on Friday, September 13th and released on September 20th.

As expected, the new iPhone 11 Pro line features a triple-camera setup on the back, which includes a telephoto lens, a wide angle lens, and a super wide angle lens. The new super wide angle lens is shown in the Camera app as a 0.5x button. Just zoom out to see more and take wider shots, from 0.5x to 2x. The ultra-wide has an f/2.4 aperture with a 120-degree field of view 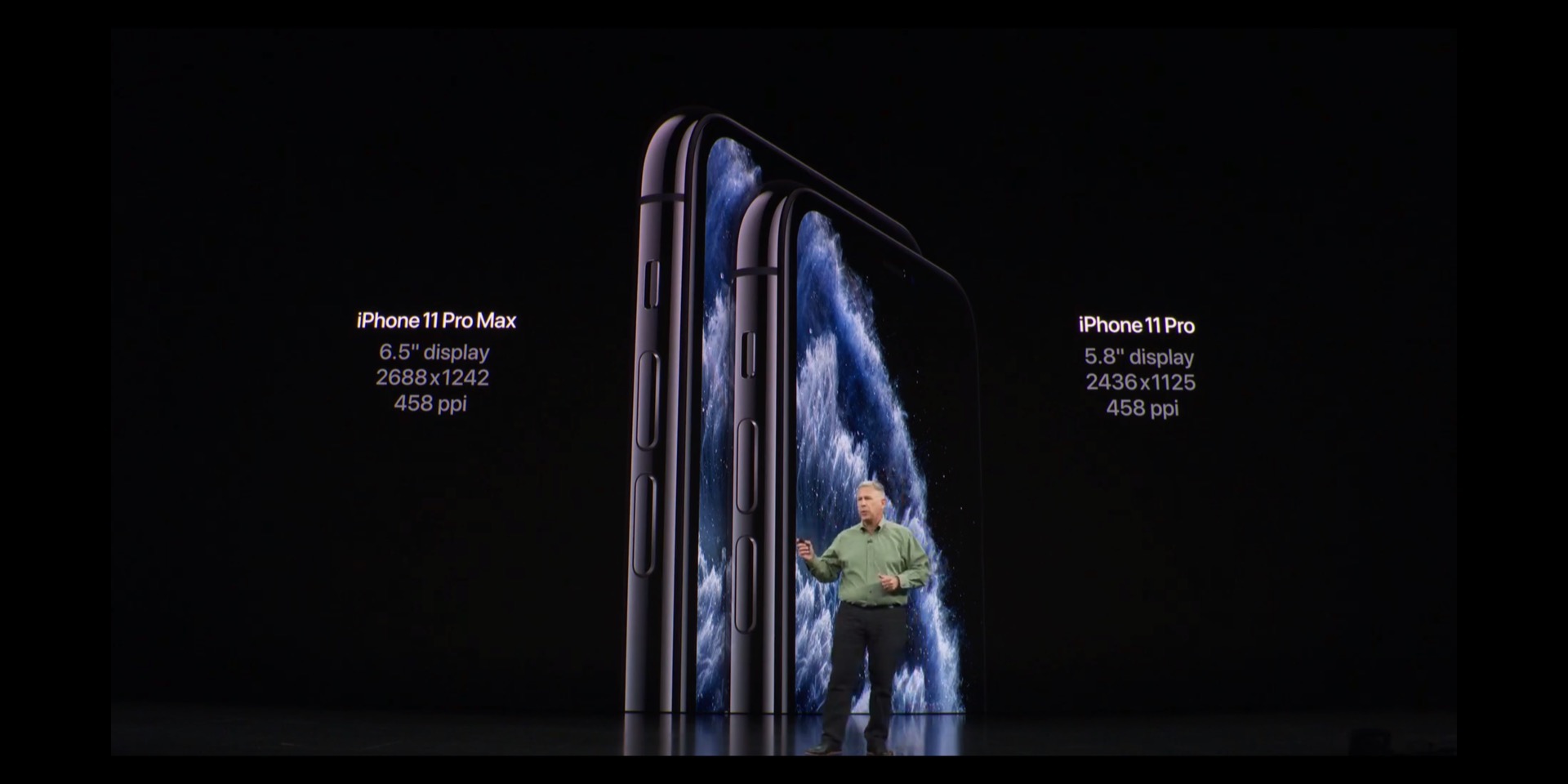 Apple is also touting the iPhone 11 Pro’s video capabilities. Apple pairs the three cameras at the factory to improve color and exposure. You can now record 4K with extended dynamic range at 60 frames per second.

The iPhone 11 Pro and iPhone 11 Pro Max are available in four colors: space gray, silver, midnight green, and gold. The new iPhones also feature a matte finish, as opposed to the glossy glass finish of the iPhone XS.

Preorders will begin on September 13 with the new iPhones arriving to customers and Apple Stores on September 20. 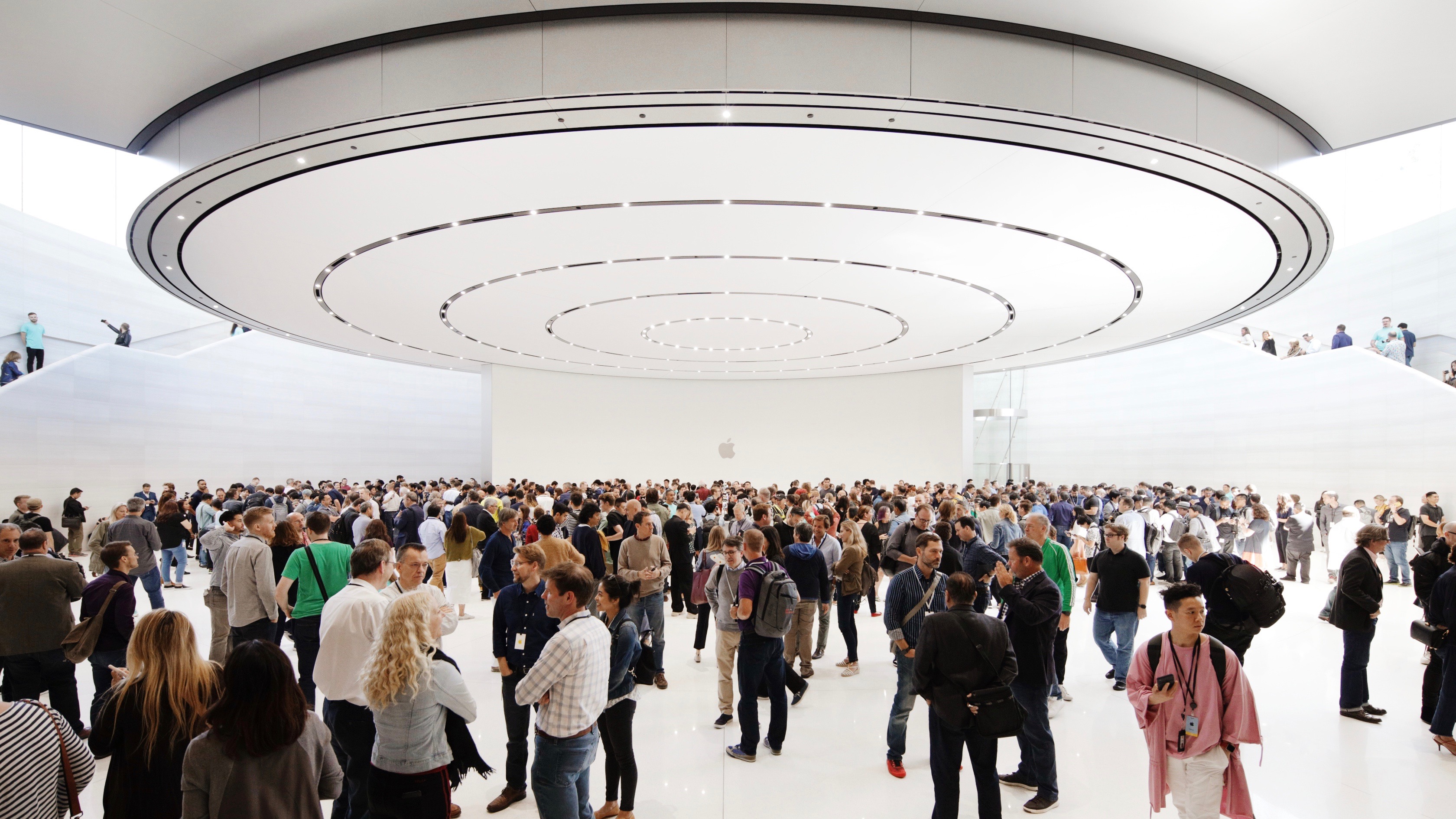 Apple packed quite a bit into its keynote today – with announcements ranging from Apple Watch to new research studies and more.

What was your favorite announcement at today’s event? What do you plan on purchasing? Let us know down in the comments!

US presidential candidates on tech giants: break up or not?

Apple TV+ subscribers: More than Hulu and (for now) Disney+