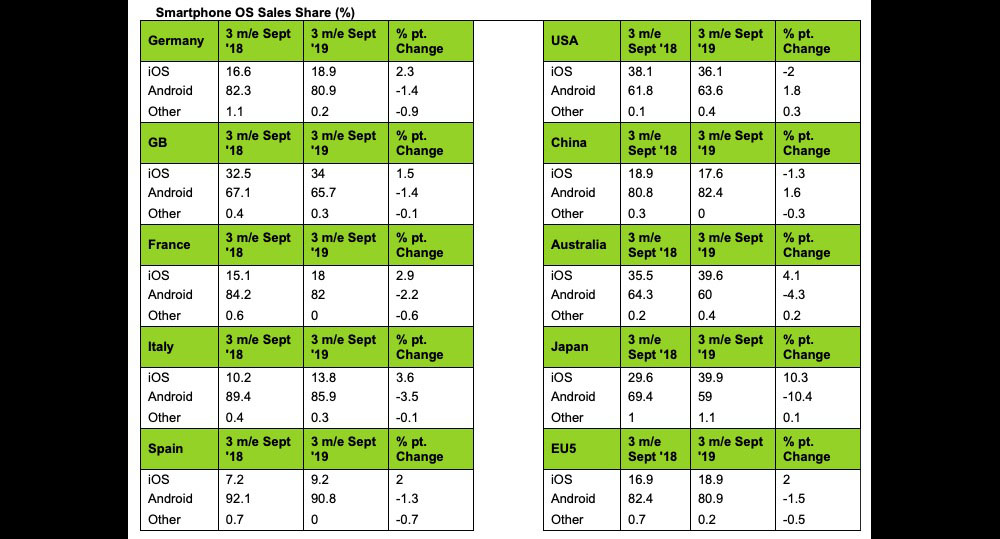 The iPhone 11 launch saw iOS make market share gains in Europe, Australia and Japan, but it suffered a fall in share in its home market of the USA, according to Kantar.

Kantar’s data for Q3 2019 includes only one week’s sales of the new iPhones, but this is enough to move the needles across the markets covered …

iPhone market share made gains in all five of the biggest European markets – France, Germany, Italy, Spain and the UK – with an average increase of two points, from 16.9% to 18.9%.

However, iOS market share fell two points in the US, and by 1.3 points in China.

Kantar said that the iPhone 11 launch was a success for Apple.

Dominic Sunnebo, global director for Kantar said: “Q3 2019 saw Apple launch its new iPhone 11 family and with just over a week of sales available, the new models contributed to 7.4% of Apple’s overall iPhone unit sales in Q3 2019, up from 6.6% from the launch of the iPhone XS family in Q3 2018.

The new models are all selling well, with the more competitively priced iPhone 11 leading in absolute terms, but the Pro models are not far behind. Combined sales of the new models are up vs. the iPhone XS launch a year ago.

In the US the model split of sales for the new iPhones is similar to the EU, though the overall contribution to Apple’s total iPhone sales in the quarter is notably larger at 10.2%.”

Kantar said the fall in China was mostly due to the impact of the trade war with the US, promoting greater loyalty toward home-grown phones.

Apple share fell slightly in China, the world’s largest Smartphone market, down -1.3%pts. The pendulum continues to swing towards home grown Chinese brands, who accounted for 79.3% of sales in the Chinese market in Q3 2019. Huawei and Honor combined made up 46.8% sales share, maintaining its dominant position from the previous quarter, helping to cushion the impact from the US – China trade spat.

The picture was different for Samsung. Although the flagship Note 10 helped, it is the company’s low- to mid-range phones that accounted the the bulk of Samsung’s European sales.

Whilst the flagship Note 10 series launch provided a boost to Samsung in Q3 2019, it is the very competitive new A series which has launched Samsung to its highest sales share in Europe since Q3 2015. New A Series models account for five of the top ten best-selling models in Europe and account for the entire top 3; #1 A50, #2 A40, #3 A20e. For years Samsung has been searching for an answer to Huawei and Xiaomi in Europe and the new A series has finally hit the mark, proving hugely popular with consumers across multiple price brackets.

Having previously chosen to overlook the majority of the A series portfolio in the US, Samsung has used its new revitalised A series range to address a gap in its mid-tier offering, with the A10 and A20 performing well. With Google looking for white space with its Pixel 3a and 3a XL models and LG having little competition in the low and mid-tier, Samsung has immediately confronted these threats.

The report adds to a consistent story of a successful iPhone 11 launch, with multiple reports of Apple boosting production in order to meet strong demand for the new models.