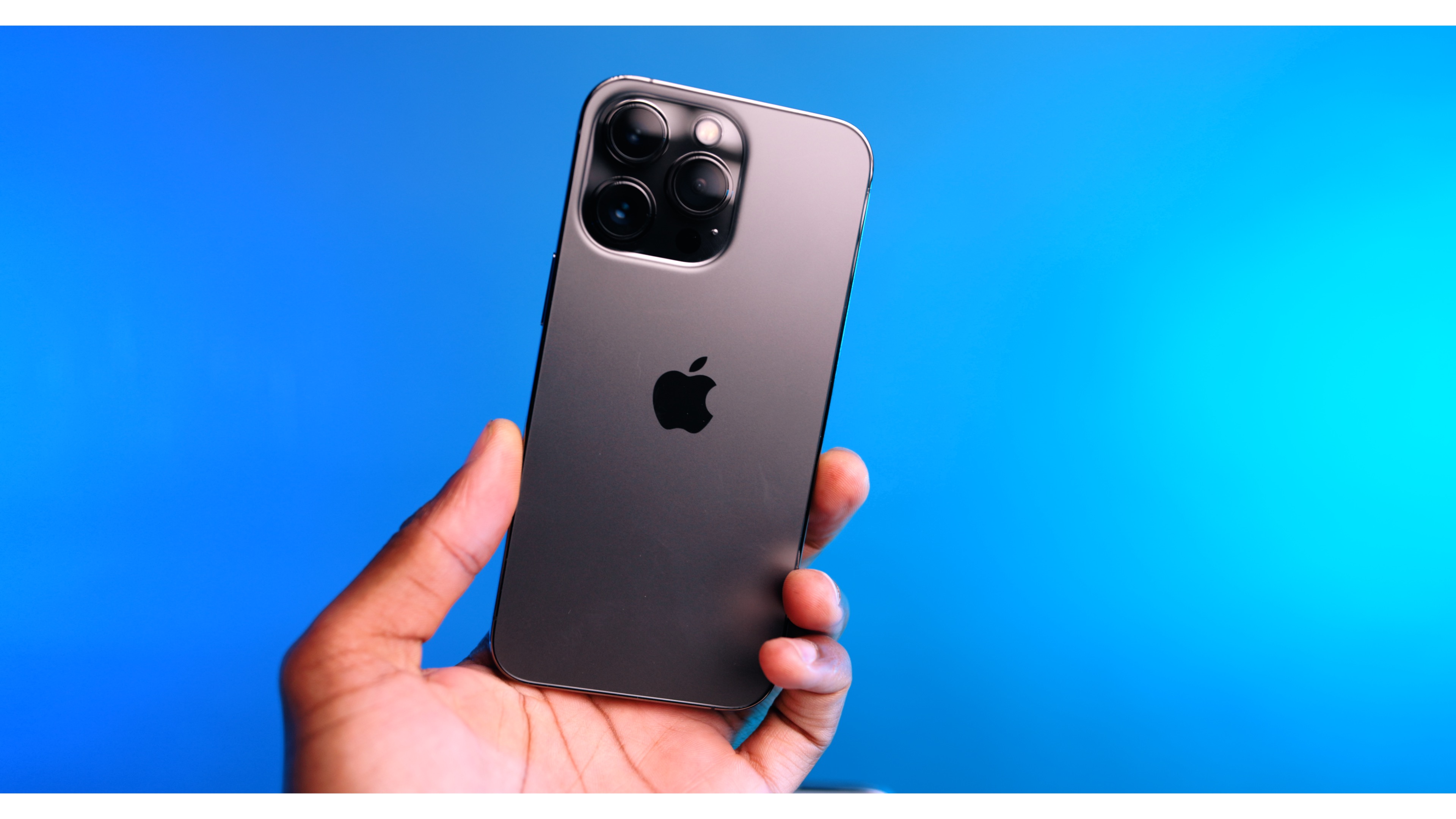 Every year we look forward to the new flagship iPhone. We expect it to bring something new to the table that revolutionizes the smartphone industry. But like it or not, iPhone 13 Pro & Pro Max are here to do something different. This year’s updates are far from revolutionary, and many users believe that the iPhone 13 Pro is what the 12 Pro should have been. But with everything Apple’s brought to the table this year, I think these are easily the best overall flagship smartphones you can buy right now.

iPhone 13 Pro leaves very little to be desired as far as the design is concerned. The 13 Pro represents the second iteration of the stainless steel flat-edge design with a frosted matte glass back, and one year later, I’m still a big fan of the design language. The feel in the hand and usability is generally better for me with some sort of case, as a result of the hard edges, but other than that I have no complaints.

The larger iPhone 13 Pro Max is my daily driver, and I personally have no problems with the size. While it doesn’t bother me, I think Apple should consider tweaking the proportions for next year’s Pro Max iPhone, as I’ve heard from many users that the Max is just too wide for their hands – and compared to flagships like the Galaxy S21 Ultra or OnePlus 9 Pro; the iPhone 13 Pro Max is definitely a wide phone. Making the iPhone Pro Max more universally useable would only be celebrated.

The notch housing the earpiece speaker, camera, and FaceID sensors is now 20% smaller in size. There’s nothing Apple’s done from a software standpoint to take advantage of this small increase in space on the display, but the smaller size of the notch is pretty noticeable if you’ve got a 12 series model to compare. With that being said, I believe the selling appeal of this update to the average consumer is likely going to be trivial. More people will pay attention once the notch is actually eliminated.

The camera lenses have also gotten noticeably larger in size, and I think this was more of a symbolic move than a technical one on Apple’s part. Apple has consistently put an emphasis on the Pro models’ camera system, so I believe that Apple increased the physical size of all the lenses to visually emphasize the performance of the cameras even further.

Apple introduced ProMotion for the iPad Pro more than five years ago. Now we finally have ProMotion on the iPhone. The display is capable of a 120Hz refresh rate, but it won’t necessarily be running at 120Hz all day. ProMotion utilizes an adaptive refresh rate, so depending on the task, the display could be at 10Hz, 30Hz, 120Hz, or somewhere in between.

The primary benefit of an adaptive refresh rate is to preserve battery life. If the display is running at 120Hz nonstop, you’re not exactly going to have an all-day battery. Thankfully, ProMotion is doing its job, because Apple hasn’t compromised battery performance in a noticeable way on either of the Pro models.

The only other change to the display outside of ProMotion is an increased maximum brightness. The new max for standard content is 1000 nits, which is 200 more than last year’s model. As far as daily usability is concerned, this is something I’ve struggled to find any value in coming from the iPhone 12 Pro Max. The difference in brightness is more noticeable on camera than in person.

While to some, these updates may seem somewhat mundane, you have to keep in mind that these are merely additions to an already fantastic screen. Colors, sharpness, brightness, and view-ability on the iPhone 12 Pros were already fantastic. Adding these new features to what they already have has made the experience even closer to perfect for everyday use.

Modern iPhones in general are incredibly fast and smooth the majority of the time. It’s never an issue to endlessly game, browse the web, or capture photos and videos without a hiccup. So the 10% increase in overall power that the A15 provides is pretty negligible for day-to-day performance compared to last year. There’s a new 6-core CPU with a 5-Core GPU and 16-core neural engine. While the A15 is a very capable processor, the performance isn’t going to necessarily wow you unless you’re coming from a X or earlier.

However, there’s always more to the story with a new processor than pure performance figures. Any improved efficiency or software optimization that the chip provides must always be factored in, and I believe that’s how the A15 stands out compared to the A14. This processor is probably doing more on the backend for efficiency than on performance. All of the new software and hardware features (such as ProRes video recording) need a processor capable of running it.

You’re going to be hard-pressed to find any major differences in overall image quality between the 13 Pro and last year’s model, but that’s nothing to be upset about because the 12 Pro has a great camera system.

My personal favorite camera feature is the addition of a macro mode for the ultra-wide-angle camera. I haven’t tried every smartphone with a macro lens, but the iPhone 13 Pro has the best macro lens I’ve seen by far. The detail coming out of photos in macro mode is pretty astonishing, and I think that’s ironic given the fact that the Ultra Wide angle lens is generally the lowest quality lens of the three.

I found myself electing to take a bunch of macro photos in the heat of my testing. It’s a lot of fun and something that I think will catch on in a huge way in the future, especially with macro functionality working for video as well.

Photographic styles is the biggest software feature for the 13 Pro’s photosystem. The feature is essentially live customizable photo filters. There are five different presets to choose from, and within those presets, you can tweak the tone and warmth. I think this is a pretty useful feature for preplanned photography. It gives you a basic sense of what photos could look like with an edit before you fully commit to it. I’m probably not going to use it much personally, but I can definitely see the value.

Apple’s big video feature being pushed for the 13 series is cinematic video. This is effectively portrait-mode video with new focus locking features. Because it’s an entirely software-driven process you can actually edit what the camera “focuses” on after the fact. I don’t think this feature is as innovative as Dolby Vision HDR video recording, which was last year’s major video feature, but you can definitely bet on other companies trying to emulate this effect for their future smartphones.

Cinematic video features face-detection and active tracking works pretty well. The camera consistently held on the selected focus points while moving, and if the subject is blocked from view temporarily, it usually has no problem finding it again and locking on. Cinematic video also lets you adjust the “aperture” of the lens, but this is basically an intensity adjuster for the digital blur being applied to the video.

One thing that reviewers have pointed out, is that cinematic video is locked to 1080p at 30fps in HDR. It’s easy to understand why Apple would want to limit this feature to 1080p, as I’m sure this mode could consume a substantial amount of free space if used extensively, but the frame rate choice is interesting because the standard for “cinema” is 23.98 fps. What is Apple trying to insinuate? Is Apple’s definition of cinema 1080p at 30fps?

ProRes Video recording was announced for the 13 Pros, but hasn’t been fully released yet. With iOS 15.1 developer beta 3 the feature was just added to the default Camera app, so I haven’t had time to properly try it out. I am looking forward to seeing how well it works.

These are simply additional features being added to an already great camera system. The iPhone 12 Pros already had DolbyVision HDR video recording at 4K/60fps, great low light capability, portrait mode and portrait lighting, and built-in RAW for photos. There simply aren’t any other smartphones that provide this experience for photos and videos in one package, and that’s what makes the iPhone 13 Pro’s camera system the best on any smartphone

Arguably my biggest complaint with the standard iPhone 12 Pro was battery life, and that’s why I’ve stuck with the Pro Max as my daily driver. The battery on the Max phones has always been great and this year is no different. Even with the 120Hz panel, battery performance seems even better than last year. The iPhone 13 Pro Max is a truly all-day battery smartphone. I can easily get seven hours of screen-on-time with light to moderate usage throughout the day.

Unless you’re coming from a 12 Pro or Pro Max, these devices are a pretty huge update. If coming from an 11 Pro or earlier, you’re going to get the new design, loads of new camera features, better performance, ProMotion, and the best battery life the iPhone has ever had.

There are always aspects of a smartphone that can be improved, but everything on these phones just works so well that there’s very little to be desired from a hardware standpoint. They have an industrial design that feels premium and durable, a display that’s bright, vibrant, and super smooth, best-in-class performance, and the best camera system on a smartphone. That’s why (if you’re impartial to operating systems) the iPhone 13 Pro and Pro Max are the best overall flagship phones you can buy right now.

What are your thoughts on 13 Pro and Pro Max? Sound off in the comments below!