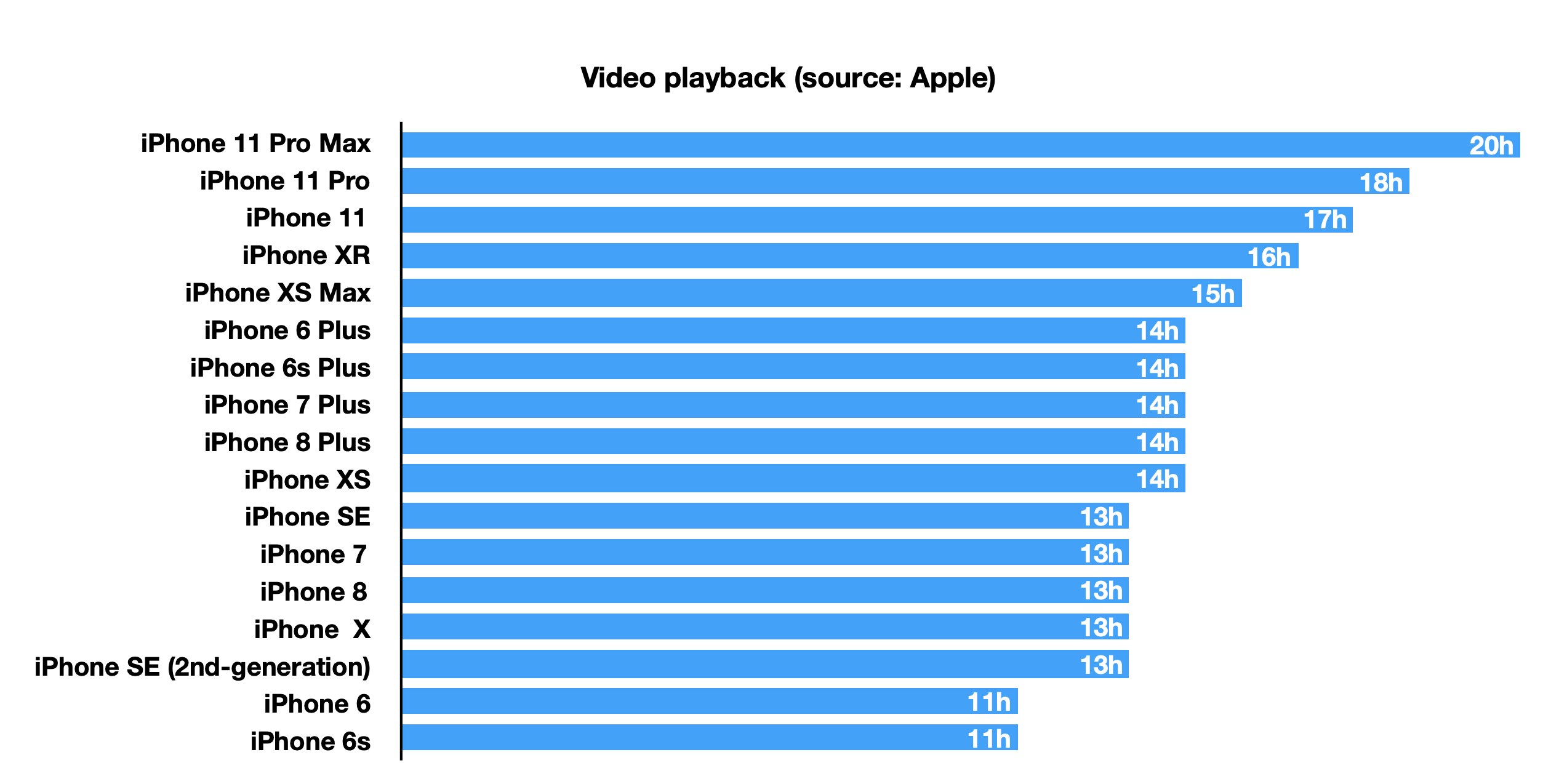 Battery life is one of the most important factors on smartphones these days. Apple doesn’t make it particularly easy to compare the lifetimes between iPhone models. We’ve collated all the specs so you can break it down, and help with your buying decision.

The latest entrant to this arena is the just-announced iPhone SE 2nd-generation. But how does the new iPhone SE battery life compare to the rest of Apple’s iPhone lineup?

Battery life is the result of a combination of physical battery life, chip efficiency and operating system behavior. It’s also hard to get accurate numbers for each individual as battery life can vary dramatically based on the current features being used, like GPS or gaming, and even geographic location. If you have a weak phone signal, your iPhone battery life will be less as the phone works harder to maintain a cellular connection.

On the whole, Apple has substantially improved overall battery life of the iPhone in recent years, through a combination of software optimizations and by putting ever-bigger capacity batteries inside the devices. They have also changed up how they report battery life over time.

The one meaningful statistic Apple reports for every iPhone model is called “video playback”. This test is basically how long can the phone continuously play video content that is stored on the device’s internal storage. Higher is better.

The battery life king in the world of the iPhone is the iPhone 11 Pro Max, which is to be expect as it is Apple’s biggest and most expensive model. The phone has an almost 4000 mAH internal battery, and rivals the leading Android phones for longevity.

The battery life for the new iPhone SE does not compete with Apple’s latest flagships. Presumably for cost reasons, the internal battery of the iPhone SE currently appears to be identical to the iPhone 8’s internal battery. As a result, it benchmarks 13 hours for video playback.

That means its battery life is about the same as the original iPhone SE. However, that should still be enough to last the day with moderate usage. You won’t be able to play games and not notice the battery hit, but for general web-browsing/social media/messaging, the new SE battery should be just fine.

For iPhone 11 and later, Apple has also started reporting the battery life for streaming video playback, that is watching video being downloaded over the internet. These numbers are about 40% smaller than the offline video test, which shows how much extra power running the phone’s radios requires. The $699 iPhone 11 can stream for 10 hours, whereas the $399 iPhone SE scores 8 hours.

Another factor to bear in mind with battery life is how easy it is to top-up the battery with some extra juice.

Since the iPhone 8, you can use a higher-wattage fast charger like the 18W Apple charger to speed up charge times. iPhone 8, iPhone X, iPhone 11 and the new iPhone SE can reach 50% charge in about half an hour of fast charging. Only the iPhone 11 Pro comes with a fast charger bundled in the box though. All other models — including the new SE — come with the slower 5W iPhone charger.

You can also fast charge wirelessly using a 10 watt Qi charger, like the Belkin BoostUP, on newer iPhones. However, the fast charger wired adapters are still the fastest method.