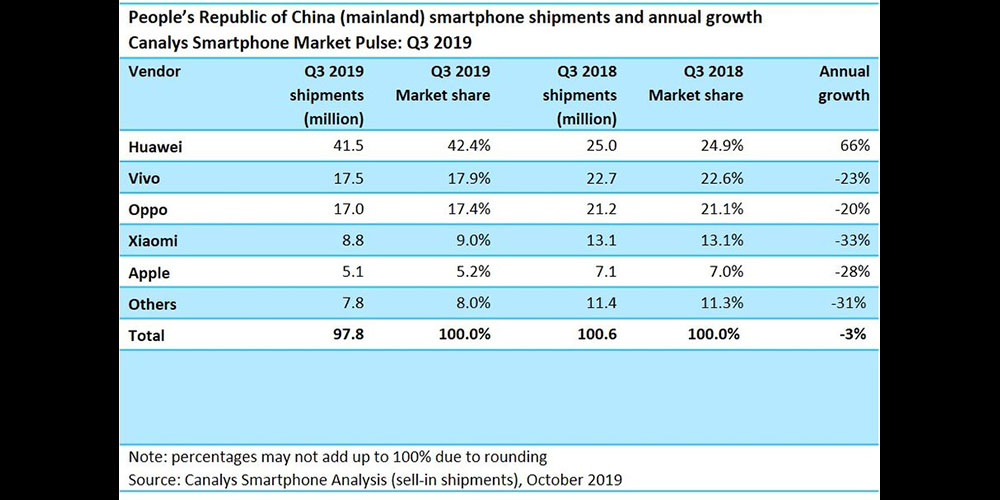 iPhone shipments in China fell by 28% in Q3 thanks to fallout from the US trade war, according to the latest Canalys data. The slump would have been even more dramatic but for the popularity of the iPhone 11, says the company.

There could, though, be tougher times ahead for Apple …

The main reason for the fall is believed to be anti-American sentiment among Chinese consumers in response to the trade war started by the White House, alongside the ban on Huawei importing components from the US.

There has been a growing consumer boycott of Apple products in China, with signs first spotted as far back as the beginning of the year. Indeed, falling sales in China was cited by Apple as a key reason for its rare revision to its first guidance fiscal quarter of the year.

“We believe the economic environment in China has been further impacted by rising trade tensions with the United States. As the climate of mounting uncertainty weighed on financial markets, the effects appeared to reach consumers as well, with traffic to our retail stores and our channel partners in China declining as the quarter progressed.”

One analyst predicted back in May that iPhone shipments in China could fall by as much as 50%. While that turned out to be pessimistic, a 28% slide is still huge, especially when set aside the launch of a popular new model.

Canalys says that it was the base-model iPhone 11 which prevented an even bigger fall.

Apple maintained the number five position, thanks to the immediate boost of iPhone 11 launches in September, which accounted for nearly 40% of its Q3 shipments.

“Apple is more prepared than previous years to face strong headwinds in China.” Commented Liu. “Its iPhone 11 models focused on camera improvements, which proved desirable to Chinese consumers. More importantly, a lower launch price of iPhone 11 and a more flexible channel margin structure for local distribution on the new devices, were critical market stimuli for Apple.

But Apple’s relatively late entry into 5G, expected next September, could prove problematic.

it faces a looming challenge, as Chinese vendors and operators are set to drive heavy marketing and promotions around 5G in the next two quarters. This could steal its thunder.

Huawei was the big winner in the quarter, with 66% growth year-on-year.

Huawei extended its market lead by shipping 41.5 million smartphones, to reach a record market share of 42%, an annual growth of 66%. This is Huawei’s sixth consecutive quarter of double-digit growth amid a gloomy China market. Shadowed by Huawei’s strong performance, the remaining top five vendors, Oppo, Vivo, Xiaomi and Apple, shrank further. Their combined share only accounted for 50% of the market, down from 54% in Q2 2019, and 64% in Q3 2018.

“Huawei opened a huge gap between itself and other vendors. It has 25% more share than this quarter’s runner-up, Vivo,” commented Nicole Peng, Canalys VP of mobility.

The base-model iPhone 11 appears to have been more popular than Apple expected, not just in China but around the world.