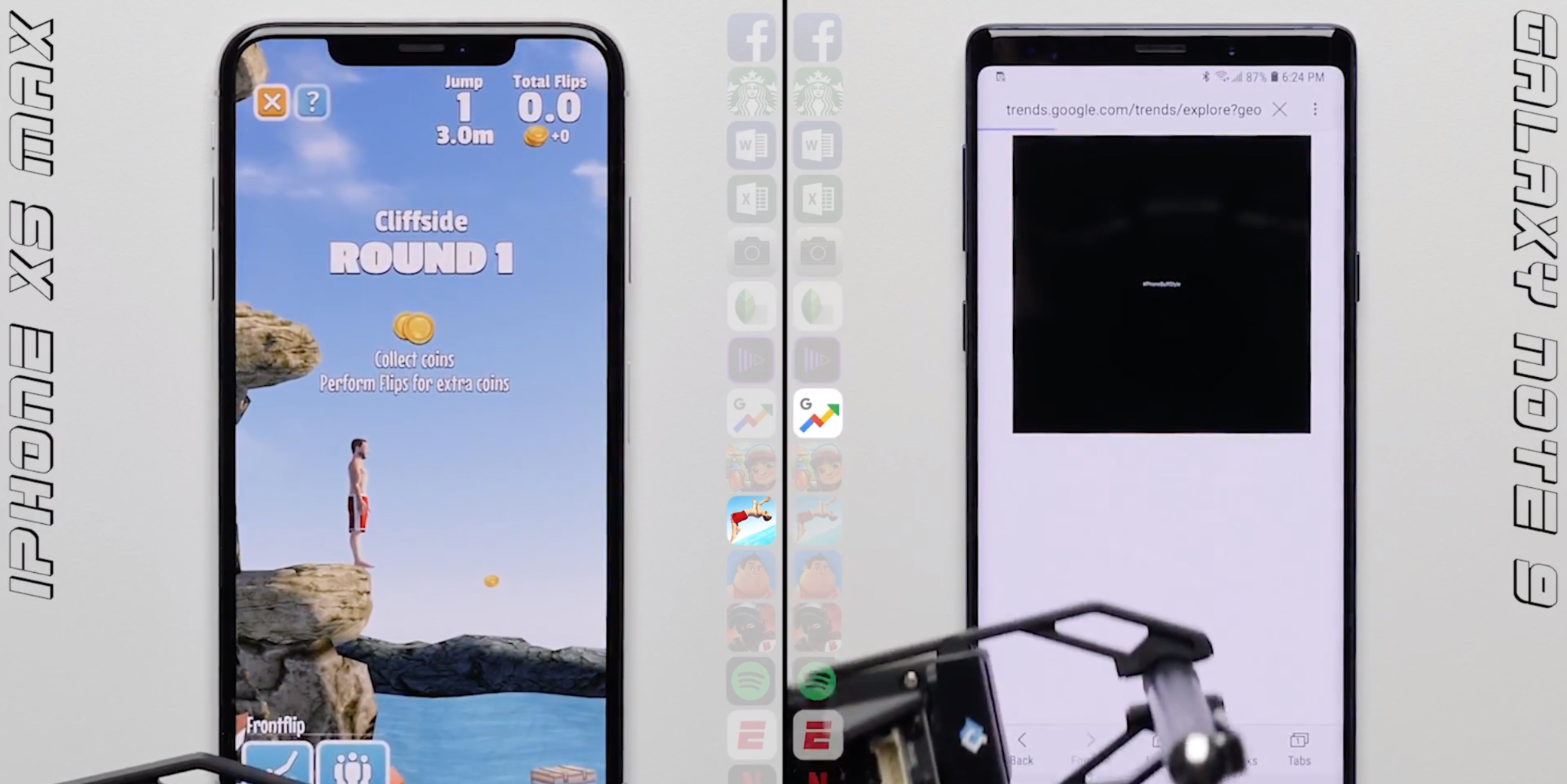 In a synthetic test of real world app launch times, the iPhone XS Max beats out the Samsung Galaxy Note 9 by a decent margin. PhoneBuff uses robot arms to reliably open and switch apps as each app completes its loading tasks, so it is more scientific than most of these phone speed tests — at least the human error is eliminated.

These ‘relay race’ tests involve launching the equivalent apps on the iPhone and the Android phone in sequence, and then opening each again in reverse order.

In a comparable test last year, the Galaxy Note 8 won over the iPhone 8 Plus.

In that case, the iPhone 8 (and iPhone X) was mainly held back by its lower RAM specifications which meant it had to reload apps on the second time around, whilst the Note was be able to unfreeze them from memory instantly and skip almost all loading times on the second lap.

This generation, Apple upped the RAM on the iPhone XS to 4 GB. The Note 9 has a whopping 8 GB. However, the little extra given to the iPhone is enough for it to take the top spot once again. It finishes about 15 seconds faster than the Note 9, about a ten percent difference.

The 4 GB RAM was enough for the iPhone XS to keep all 16 apps in memory on the second lap, apart from Starbucks. The Galaxy Note 9 retained all apps in memory but it just took longer to load each the first time.

Here’s a chart comparing the launch times (iPhone XS Max in black, Note 9 in blue). The iPhone is faster at loading each app apart from Facebook and Spotify. This is a combination of the powerful XS A12 chip in the iPhone XS and the app launch time improvements introduced with iOS 12.

How much does this matter? It’s hard to say. Ultimately, ‘app launch battles’ don’t really relate to how normal people use their devices but it is a decent proxy of real-world performance for the average person who switches between messaging and media apps, as well as dabbling in some games throughout the day.

It’s nice to be able to see how well phones can keep their apps in memory, as that’s really where you see the most time savings over time, meaning you can skip the loading screens of the graphics intensive game you were playing only a few hours ago, more often than not.

It’s certainly a better comparison than the ‘up to 20% faster’ lines that phone manufacturers use to compare their devices year over year.