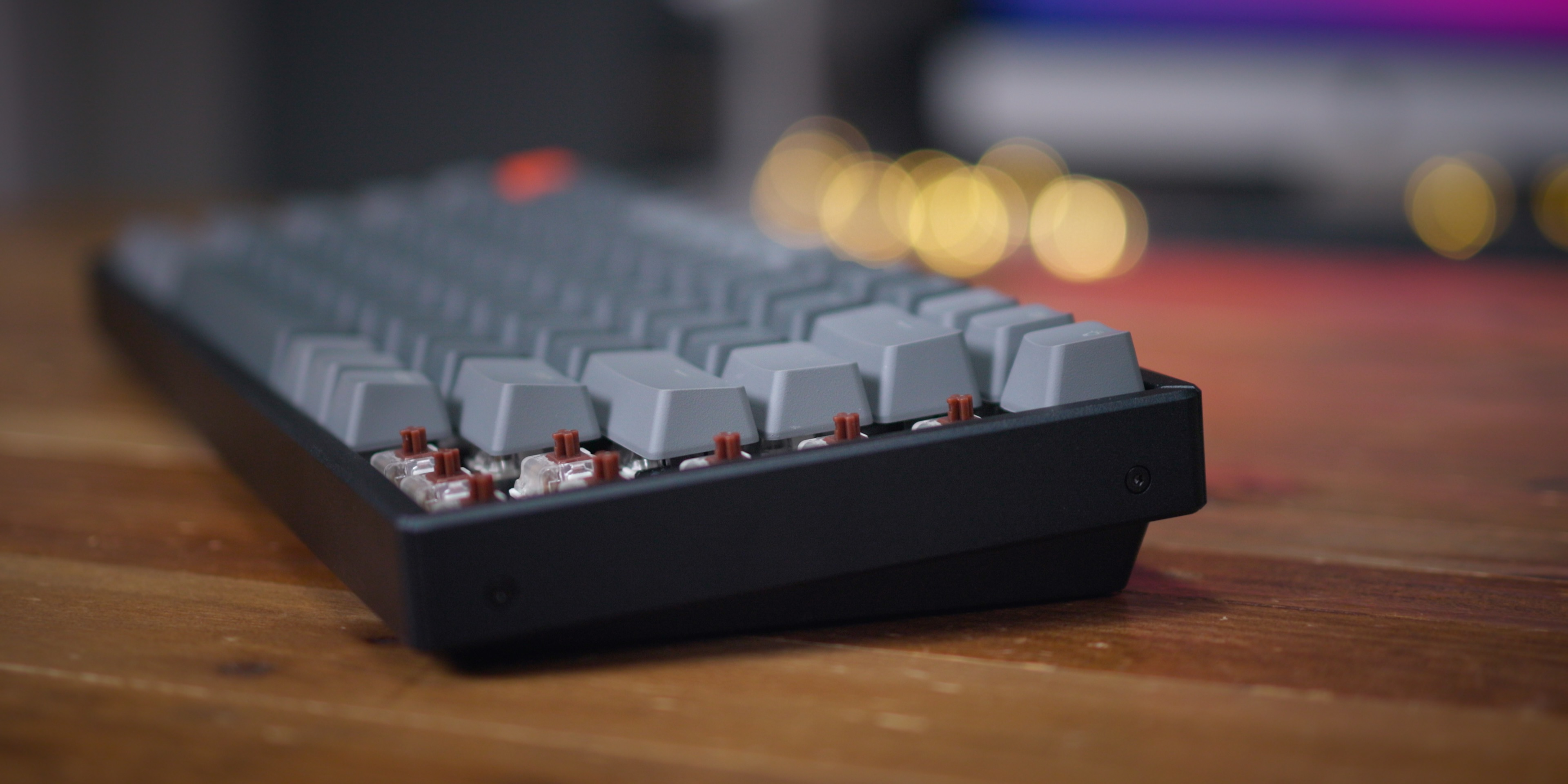 The original Keychron K2 was, and still is, one of my favorite third-party Mac accessories. Keychron K2 version 2 subtly builds on the original’s legacy. Watch our hands-on video for the details.

The most noteworthy outside design difference between the original K2 and the updated version is the inclined bottom frame. Instead of a flat resting area, the updated version features a wedge design that provides an angle for typing even when the feet incline is disengaged.

Such an update appears subtle, but even with just these few degrees of added incline, typing on the Keychron K2 version 2 feels more natural.

Along with the inclined bottom frame, Keychron has changed the design of the feet incline. Version 2 includes a dual feet incline option. Users can now opt to engage a pair of shorter feet for a less dramatic incline.

Keychron states that the K2 v2, sporting the same 4000mAh battery as the original version, is rated for the same roughly 70-hour battery life rating of its predecessor. I would have liked to have seen a K2 with a larger battery for even more battery life over Bluetooth, because battery life is probably the only real “weakness” that I’ve seen from this keyboard.

In other words, the main benefit of the Bluetooth 3.0 → 5.1 upgrade is an increase in connectivity reliability. While I rarely experienced connectivity issues with my original Keychron K2, improvements in this area are always welcome.

In my experience, the original Keychron K2 lasted me a real-world 2-3 weeks on Bluetooth before I had to charge it. Performance will vary depending on how bright you set the backlight, along with the type of backlight effects you decide on using.

What’s great about the K2 is that it features a USB-C port for connecting the included right-angle USB-C cable (which now comes braided) for recharging the K2. This allows you to recharge your keyboard and/or use it as a wired keyboard if desired.

The previous keyboard lacked a visual cue to let users know that Caps Lock was active. This could result in typing incorrect passwords, among other annoyances. Version 2 features a dedicated Caps Lock backlight that illuminates the Caps Lock lettering in red when active.

The updated Keychron K2 features the same button layout on the left side of the keyboard for switching between Mac and Windows modes, and/or Bluetooth and Cable mode. Version 2 features updated slider switches with a more tactile surface to make it easier to identify the switches via touch. The labels for each switch, although still ridiculously tiny, are also slightly more legible than before.

Still one of the best keyboard options for Mac users

One area that has remained consistent between version 1 and version 2 is the feedback response from typing on the Gateron key switches. Just like version 1 of the Keychron K2, the updated model features Gateron red, blue, and brown key switch options. These key switches are what give mechanical keyboards their “clicky” tactile feel. Each key switch type differs in its sound and feel.

Like previously, I opted for the quieter brown key switches, which are tactile and clicky, but are a little more refined when compared to the extra loud and tactile Gateron blue switches. Key switch preference is largely subjective, so it might help to test out each of the switches before committing to a certain type.

I’ve been typing regularly on the original Keychron K2 for nearly a year, and it’s still just as amazing to type on as the day I got it. The updated K2 feels exactly like the original, which is a good thing.

Compared to scissor switch options like Apple’s Magic Keyboard, the Keychron K2 with its Gateron key switches features a heaping helping of additional key travel (4±0.4mm of total travel) when pressing a key.

The result is a more satisfying typing experience that I find reduces finger and wrist fatigue when compared to options with relatively little key travel. I like to illustrate it like this: typing on a low-travel keyboard is like making your fingers crash into the keyboard, while the keys on mechanical keyboard work like shock absorbers to reduce the stress of impact on your fingers. If you’ve never typed on a mechanical keyboard before, you owe it to yourself to try one.

Not only is the keyboard Bluetooth-enabled, but it features the ability to connect to three different Bluetooth hosts, such as a Mac, a Windows machine, and a iPad, and switch between the three via a simple button combination.

The keyboard is also Mac-friendly out of the box. Not only does it feature the full row of function keys for adjusting brightness, engaging Mission Control and Launchpad, controlling media playback, etc., it also features Mac-centric caps for keys like Option and Command.

If you’re primarily a Windows user, you can easily replace some of the Mac keycaps with included Windows keycaps. The K2 comes bundled with a handy keycap puller for easily removing and replacing keys. I also find the keycap puller handy to have around when cleaning the keyboard.

Like the first version of the Keychron K2, version 2 features over 15 different RGB backlight effects to choose from. These effects can be cycled through via the lightbulb key in the upper right-hand corner. You can also cycle through various colors for each effect by pressing the Fn+Left or Right arrow keys.

RGB comes standard on the Keychron K2 with aluminum frame, which is the one I recommend that you purchase. There is also a white backlight-only version, but it comes with the less desirable plastic frame.

The RGB effects are fun, if not a little gimmicky. I often found myself turning off the effects, or settling for a simple white LED backlight when typing in dark environments. In most cases, I tended to outright disable the RGB lighting (pro tip: press fn+lightbulb key to quickly toggle the effects on or off). Not only was this less distracting, but disabling the effects helps save on battery life.

As you can probably discern, I’m not much of an RGB fan, but if you like the idea of having multi-colored flashing, breathing, or static light effects on your keyboard, then you’ll love the Keychron K2. Be sure to watch our hands-on video above as I demonstrate some of available effects.

While I don’t think the enhancements are enough to warrant v1 owners to ditch their current keyboards to upgrade to v2, the upgraded model makes the Keychron K2 all that more of an obvious choice for Mac users looking for their first wireless mechanical keyboard.

This is, in my opinion, one of the best accessories for Mac users, especially if you own a desktop Mac like an iMac, Mac mini, or Mac Pro. The K2 also makes for a good iPad companion with its ability to pair with up to three hosts and connect to the iPad Pro directly via USB-C.

Having used version 1 for nearly a year, I’ve been extremely impressed by how well the keyboard has held up. For example, none of the keycap labels have begun to fade, and the key switches feel just as tactile and responsive as they did on day one.

You can find the Keychron K2 on Amazon. Do you use a mechanical keyboard with your Mac? If not, what’s stopped you from making the move? Sound off down below in the comments with your thoughts on the matter.