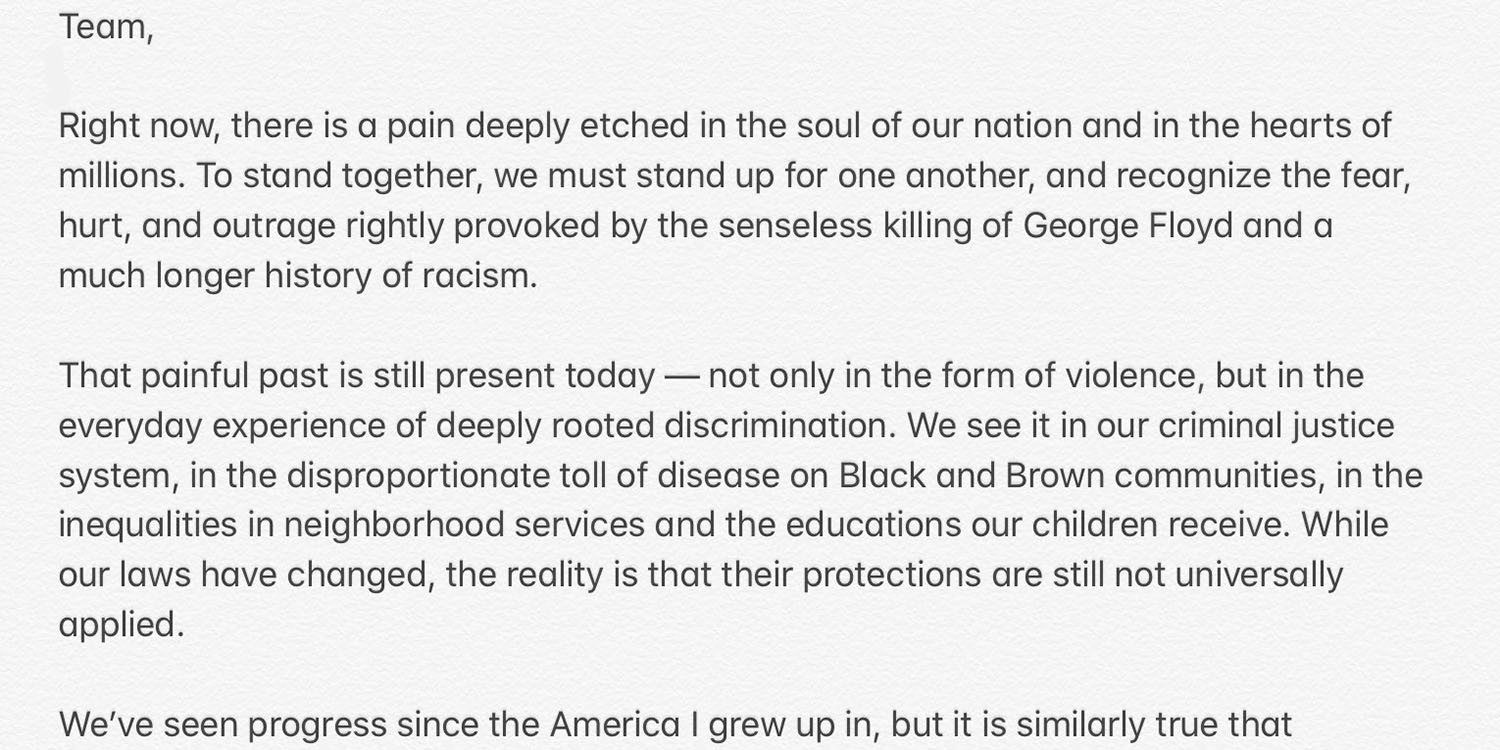 Apple CEO Tim Cook has responded to the ‘senseless killing’ of George Floyd by writing a memo to all staff. In it, he argues that while the coronavirus crisis has created a strong desire for a return to normalcy, we should instead ‘aim far higher.’

The memo begins by acknowledging the strength of feelings that have given rise to widespread protests across the US, and the inequalities which remain …

Right now, there is a pain deeply etched in the soul of our nation and in the hearts of millions. To stand together, we must stand up for one another, and recognize the fear, hurt, and outrage rightly provoked by the senseless killing of George Floyd and a much longer history of racism.

That painful past is still present today — not only in the form of violence, but in the everyday experience of deeply rooted discrimination. We see it in our criminal justice system, in the disproportionate toll of disease on Black and Brown communities, in the inequalities in neighborhood services and the educations our children receive. While our laws have changed, the reality is that their protections are still not universally applied.

In the memo obtained by Bloomberg, Cook describes Apple’s response.

Today, Apple is making donations to a number of groups, including the Equal Justice Initiative, a non-profit committed to challenging racial injustice, ending mass incarceration, and protecting the human rights of the most vulnerable people in American society. For the month of June, and in honor of the Juneteenth holiday, we’ll also be matching two-for-one all employee donations via Benevity.

He quotes Martin Luther King in calling for seeking to do better than return to the status quo.

This is a moment when many people may want nothing more than a return to normalcy, or to a status quo that is only comfortable if we avert our gaze from injustice. As difficult as it may be to admit, that desire is itself a sign of privilege. George Floyd’s death is shocking and tragic proof that we must aim far higher than a “normal” future, and build one that lives up to the highest ideals of equality and justice.

In the words of Martin Luther King, “Every society has its protectors of status quo and its fraternities of the indifferent who are notorious for sleeping through revolutions. Today, our very survival depends on our ability to stay awake, to adjust to new ideas, to remain vigilant and to face the challenge of change.”

With every breath we take, we must commit to being that change, and to creating a better, more just world for everyone.

Floyd died after then Minneapolis Police Officer Derek Chauvin knelt on his neck for 8 minutes and 46 seconds, including almost three minutes after Floyd became unresponsive. This occurred while Floyd was unarmed and handcuffed.

Chauvin, who was dismissed from the police following the incident, has been charged with third-degree murder and second-degree manslaughter. CNN reports that the specific charges reflect a belief by prosecutors that the former officer did not intend to kill, but knowingly committed an act which carried a significant risk to life.

Under Minnesota law, third-degree murder is defined as causing death of a person “by perpetrating an act eminently dangerous to others and evincing a depraved mind,” without regard for life and without intent to kill.

OmniPlan 4 debuts for Mac with dark mode along with new...

Apple releases watchOS 6.2.8 with Car Key and ECG to three...