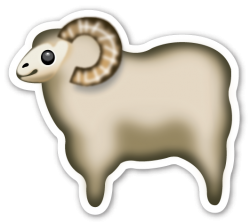 Merriam-Webster recently announced that it has added “sheeple” to its dictionary, an informal word that it defines as “people who are docile, compliant, or easily influenced” and thereby “likened to sheep.”

James Nichols, who ran the family farm here, stamped dollar bills with red ink in protest against currency and told his neighbors that they were “sheeple” for obeying authority like livestock. — Sara Rimer and James Bennet

…but then there’s this:

Apple’s debuted a battery case for the juice-sucking iPhone—an ungainly lumpy case the sheeple will happily shell out $99 for. — Doug Criss

Merriam-Webster, which dates back to 1843, says the first usage of the word “sheeple” was in 1945, long before the advent of the Mac, iPod, iPhone, iPad, and Apple as a company altogether. For what it’s worth, the word’s popularity apparently falls within the bottom 10 percent of its dictionary.

‘Sheeple’ is in the dictionary now. https://t.co/pbXVADEoBm

Sadly, this is not the Onion.
Discuss this article in our forums