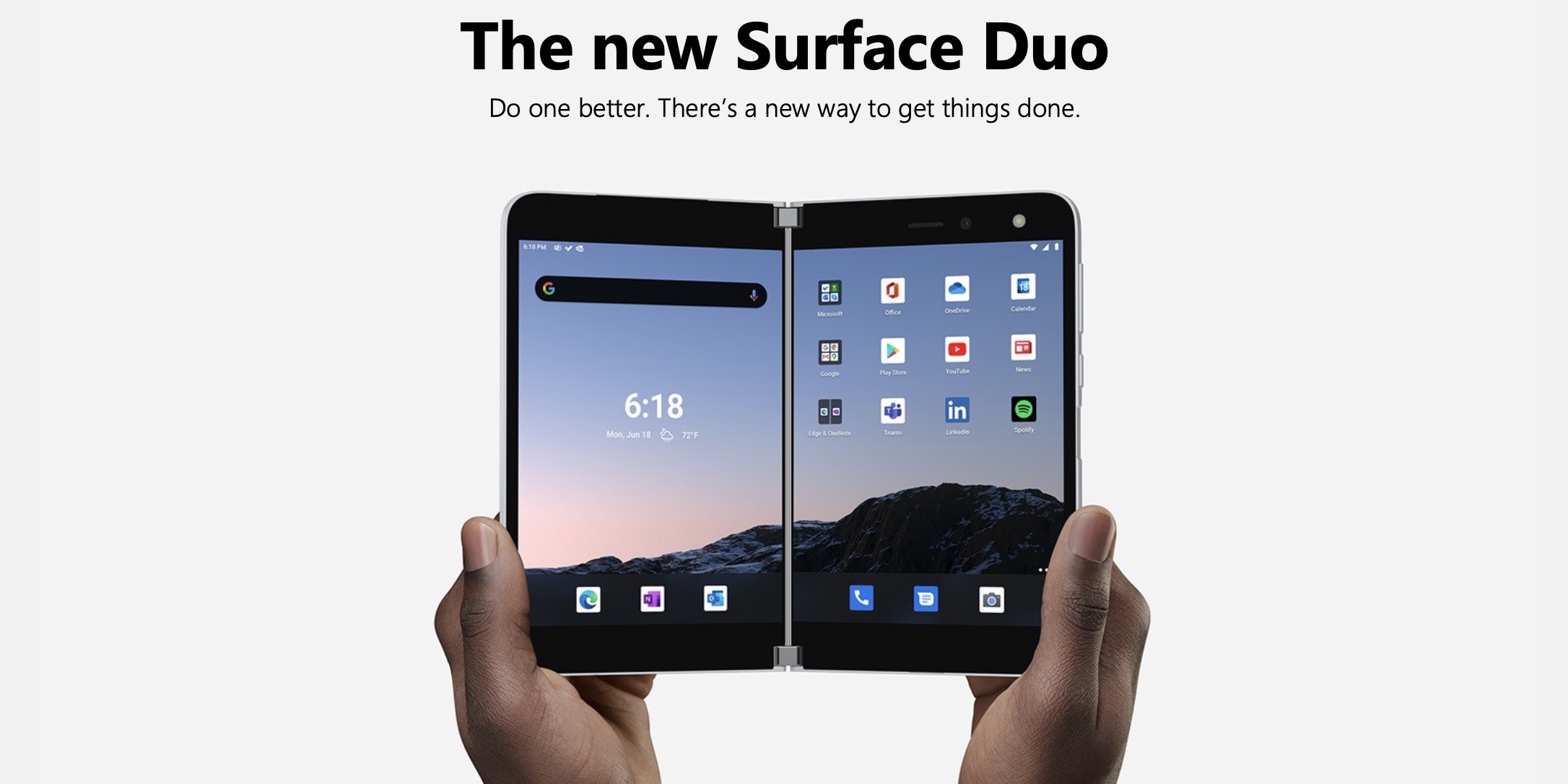 After leaking back in 2018, Microsoft officially unveiled the Surface Duo in October 2019. Today the company has launched the iPad mini-sized foldable with pre-orders now open. Let’s look at what you get with the $1,400 Surface Duo and how it differs from devices like Samsung’s Galaxy Fold.

Although Microsoft’s Surface Duo is about as compact as large smartphones when folded and can make phone calls, the company is marketing it as a dual-screen productivity device.

In fact, Microsoft doesn’t use the term smartphone at all on the Surface Duo’s page. And omissions like NFC and wireless charging position it as more of a next-gen tablet than a phone.

Notably, the Duo’s size when unfolded is almost identical to the 7.9-inch iPad mini and earlier this year we saw Apple submit a patent application for a very similar design. So even if you wouldn’t consider picking up this Android-based foldable, it’s interesting to see Microsoft innovating in this space.

So what do you get for $1,400 with the Surface Duo? It comes with two 5.6-inch AMOLED displays on the inside that make an 8.1-inch display when unfolded (with a break in the middle). It uses a unique 360-degree hinge that allows for multiple modes of use and features Gorilla Glass for screen durability. It certainly has chunky bezels when compared to smartphones but they are similar to what’s found on the iPad mini.

Other specs include last year’s Qualcomm Snapdragon 855 processor that will run Android 10, 6GB of RAM, and 128 or 256GB of storage and fingerprint reader.

How does it compare to other foldables?

While the Surface Duo is lacking features found on other Android foldables like the Galaxy Fold or Motorola Razr, it offers a different and better experience with a glass display vs plastic, larger overall screen with the more versatile 360-degree hinge, and a very thin design at just 4.8mm unfolded (9.9mm thick folded). For reference, the iPhone 11 Pro comes in at 8.1mm thick with the iPad mini being 6.1mm thick.

Another selling point for the Duo is support for Microsoft’s Surface Pen.

However, you’re not getting an outside display with the Duo like you do with Samsung’s Galaxy Fold or Motorola’s Razr, and as mentioned above, no niceties like NFC and wireless charging. The 11MP camera also isn’t likely to blow anyone away.

As for price, it may sound like a lot at $1,400 but that is $100 less than the Razr and almost $600 less than the Galaxy Fold debuted at. As mentioned by Steve Troughton-Smith, this is a first-gen product and Microsoft isn’t likely aiming for mass-market success.

MKBHD noted the downsides of the Surface Duo but that it’s a compelling product with Microsoft taking a unique approach with the dual-screen functionality.

The Surface Duo is available for pre-order now and will start arriving to customers from September 10th. What do you think about the next-gen tablet approach to foldables? Is this something you want to see Apple bring to market? Share your thoughts in the comments below!