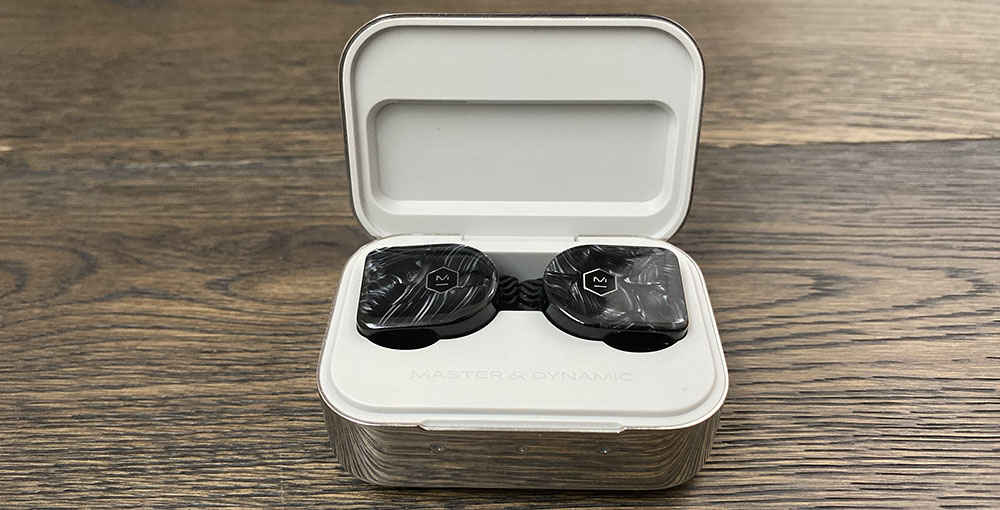 With anything audio-related, there is always a trade-off to be made between sound quality and cost. But there’s also a sliding scale with best audio quality at one end and mobile convenience at the other end.

MW07 were the product that had me change my position on that scale, and the MW07 Plus has made that shift even more practical…

Even if you choose your headphones from the same company, you need to decide how much you value ultimate audio quality against portability. In general, things look like this …

Next come on-ear headphones. They sacrifice a little driver size and passive isolation for a smaller form-factor, making them more practical when out and about. I switched to on-ear headphones rather early on, with B&W P5s my long-time favorites. For me, they still offered superb audio quality while their fold-flat design made them easy enough to slip into a bag, and comfortable to wear around your neck when not listening to them.

Finally, we get to in-ear. The nature of these, of course, means you get a much smaller driver, typically in the 8-10mm range. The MW07 drivers are 10mm, for example. The difference between 35mm and 10mm isn’t as big as it might seem, as the in-ear ones are much closer to your ear-drum, but there’s no doubt that you are trading off quality against convenience.

That was a step too far for me – until the MW07 came along. The beryllium drivers normally found only in very high-end hifi kit meant they delivered an audio quality which was close enough to my beloved P5s that I was prepared to make the switch. More on that below.

Put the original and latest model side-by-side and you’d be hard-pressed to spot the difference, other than the new color options. The form-factor of both earphones and that beautiful polished stainless steel case are identical. But there are four technical differences.

First, battery life. Don’t ask me how, but Master & Dynamic has somehow managed to triple the battery life. Where you once got 3.5 hours of continuous listening, you now get a claimed 10 hours. Total listening time, including in-case recharging, has increased from 14 hours to 40 hours. That’s an astonishing improvement. I haven’t yet had the chance to put the claims to a full test but will update when I have done so. What I can say after a total of about three hours of use over a few days is that I haven’t yet had to charge them, and both earphones and case charge indicators are still in the green.

Second, ANC. The MW07 Plus have feedforward ANC, which means they use microphones outside to detect ambient sound and then apply noise-cancellation to that. More on this in a moment.

Fourth, you can now use only one earphone if desired. This is intended for phone calls, but you can also use the feature for music if you’re some kind of savage.

There’s not too much new for me to say here over my review of the previous model. They look the same. They feel the same. And, ANC aside, they sound the same. So I’ll start by quoting what I wrote then:

The MW07 have 10mm drivers, which are the largest you’ll find in-ear, and they are made of beryllium, a material used only in high-end Hi-Fi equipment. The stiffness and lightness help compensate for the size, and the cost of the material likely goes a long way toward explaining the $299 price tag.

While no in-ear headphone can match the performance from their larger brethren, the MW07 come closer than any others I’ve yet tried. The sound is simply stunning for the size.

The audio is beautifully neutral, especially noticeable in live performances where you can really feel you are there in the room.

Both treble and mid-tones are clear and detailed, and the bass is really impressive. But while the bass has real presence, it doesn’t feel in any way artificial – the balance is spot-on.

There’s also plenty of volume. Even on public transit, I never use them at maximum volume, which I think is another impressive achievement from in-ear units. But if you do crank them up to the max, there’s no distortion.

For pure audio quality, these are hands down the best in-ear headphones I’ve ever used – and that includes B&O H5s.

For plane travel, where I want longer battery-life and the option of wired connection to the in-flight entertainment, I’ll take my P5s. But out and about in London, I’ve now switched to these – and that really says a huge amount about their quality.

So far as ANC is concerned, there’s a limit to how much can be achieved with in-ear headphones. The ideal is strong passive isolation plus a combination of feedforward and feedback cancellation – the latter using microphones inside the earcup to cancel out whatever ambient noise is left. In-ear headphones are limited to feedforward ANC and a limited degree of passive isolation.

You can hear the difference with ANC on or off (triggered by a long-press on volume up or down buttons, with voice confirmation), but I would say it’s not a dramatic one. If ANC is high on your list of priorities, in-ear headphones are not for you – and the MW07 Plus is no exception.

One other use for it: you can effectively use it in reverse to boost ambient sound in what the company calls Ambient Listening Mode.

Battery-life has never been an issue for me, but one thing that may prove useful on occasion: a 15-minute in-case charge now gets you five hours of listening. That might come in handy when traveling, though I suspect in practice I’ll stick to my B&W P5s for long-haul travel, as I can use the supplied cable to connect to the in-flight entertainment.

MW07 Plus pricing and conclusions

If you want the neatest pairing system, then Apple’s AirPods are for you. But if you care most about audio quality, Master & Dynamic’s sound quality is dramatically better. And, if the AirPods 3 pricing rumor is correct, for not much of a price premium for the upcoming ANC model.

The MW07 Plus cost the same $299 as the first-gen model, so this is a replacement model, not a second-tier one.

Had you had to choose between the two, it would mostly come down to how much the extra battery-life and limited ANC are worth to you. As it is, you simply have two more reasons to buy what are to me hands-down the best-quality in-ear headphones you can buy.

Master & Dynamic MW07 Plus True Wireless Earphones are available from the company’s website priced at $299.